Areta Zhulla to Become First Violinist of the Juilliard String Quartet Beginning September 2018; Joseph Lin to Step Down at the End of the 2017-18 Season and Remain on the Juilliard Faculty

NEW YORK –– Juilliard announced today that Greek violinist Areta Zhulla, an alumna, will be joining the Juilliard String Quartet (JSQ) in September 2018. She will be succeeding violinist Joseph Lin, who is stepping down at the end of the 2017-18 season, having decided on the birth of his fourth child to devote more time to his young family. After completing the JSQ season through June, he will remain an active member of the violin and chamber music faculties at the school. Ms. Zhulla will join other members of the Juilliard String Quartet—violinist Ronald Copes, violist Roger Tapping, and cellist Astrid Schween—as a full-time faculty member. She has appeared as soloist, recitalist, and chamber musician throughout the U.S., Europe, Canada, and Asia. Ms. Zhulla has been a member of Chamber Music Society Two of Lincoln Center, where she regularly performed with some of today’s most acclaimed artists. She is artistic director of the Perlman-Genesis Violin Project, a series of workshops at the Israel Conservatory, Tel Aviv. Ms. Zhulla is on the chamber music faculties of Juilliard’s Pre-College Division and the Perlman Music Program, of which she is an alumna, and serves as a Starling Fellow teaching assistant to Itzhak Perlman in Juilliard’s College and Pre-College divisions. Ms. Zhulla becomes the second female member of the quartet; Ms. Schween, also an alumna, joined in September 2016.

In announcing Ms. Zhulla’s appointment, Juilliard President Joseph W. Polisi said, “It is with great enthusiasm that we announce Areta Zhulla as first violinist of the Juilliard String Quartet. We’ve watched her transformation from a student in the Pre-College and College divisions to a valued faculty member and now a member of this celebrated ensemble. The JSQ has made history since its creation in 1946 and will continue to inspire our students as well as musicians and audiences around the world. I also want to express my thanks to violinist Joseph Lin for his artistry and leadership as a member of the quartet and look forward to his continuing presence on the Juilliard faculty.”

The continuing members of the quartet expressed their enthusiasm for their new colleague by saying, “As we say a grateful farewell to Joe for his wonderful years in the quartet, with our best wishes for his young family, we are very excited to welcome Areta as our new colleague. She is a passionate musician, and it is a joy to play with her. We couldn't be happier that she has so enthusiastically agreed to dedicate herself to the quartet. We are keenly looking forward to beginning our work with her in preparation for an exciting season of concerts in Europe, Asia and North America.”

Reflecting on his time with the quartet, Joseph Lin said, “I am forever grateful to my past and present colleagues in the Juilliard String Quartet for their humanity, wisdom, and artistry. Our experiences together exploring the most wonderful and profound music have been inspiring and humbling. As I turn now to the loving task of raising three young boys and their newborn sister, I know that these experiences will continue to nourish me as well as my children, and I look forward to bringing them to JSQ concerts for years to come. With great joy I welcome Areta Zhulla and eagerly await the new voice she will bring to the Juilliard String Quartet.”

Mr. Lin’s last Alice Tully Hall recital with the quartet will take place on April 12 in a program of Beethoven quartets and James MacMillan’s Quartet No. 2, Why Is This Night Different?. Mr. Lin will be with the quartet through its Ravinia Festival appearance on June 20, after which the current members will teach quartets together at Tanglewood. The Juilliard String Quartet’s complete spring semester tour schedule can be found here.

The Juilliard String Quartet was founded in 1946 as the school’s resident quartet by Juilliard President William Schuman and the founding first violinist, Robert Mann, who died in January. The quartet has performed and recorded all over the world in the course of its storied history. At Juilliard, the members of the quartet are among the school’s most important studio teachers and chamber music coaches.

Areta Zhulla, a third-generation violinist of Greek descent, has gained recognition as a passionate and poetic artist. She has been recently named “Young Artist of the Year” by the National Critics Association in Greece, and she is a recipient of the prestigious Triandi Career Grant as well as the Tassos Prassopoulos Foundation Award.

Ms. Zhulla has appeared as soloist, recitalist, and chamber musician throughout the United States, Europe, Canada and Asia, at venues such as Carnegie Hall, Auditorium du Louvre in Paris, Alice Tully Hall, Kennedy Center, Metropolitan Museum of Art, and National Arts Centre of Canada. Ms. Zhulla has been a member of Chamber Music Society Two of Lincoln Center, where she performed and toured regularly with some of today’s most acclaimed artists. Memorable collaborations include performances with Itzhak Perlman at Carnegie Hall, Metropolitan Museum of Art, and the Rose Theater at Lincoln Center, as well as collaborations with legendary conductor Michel Plasson, Pinchas Zukerman, Gary Hoffman, Gilbert Kalish, Colin Carr, and members of the Cleveland, Emerson, and Cavani String Quartets.

A sought-after leader, this season Ms. Zhulla leads the Orpheus Chamber Orchestra in Carnegie Hall's Stern Auditorium, and appears as guest concertmaster with American Ballet Theatre at the Metropolitan Opera House. Her performances have been broadcast on the PBS show "Live from Lincoln Center," the Kennedy Center Honors, and WQXR, among other radio stations throughout the nation.

A passionate educator, Ms Zhulla serves as Itzhak Perlman's teaching assistant at Juilliard as a Starling Fellow. She also serves as a member of the chamber music faculties of Juilliard's Pre-College Division and the Perlman Music Program, of which she is an alumna. Ms. Zhulla is artistic director of the Perlman-Genesis Violin Project, a series of workshops at the Israel Conservatory of Music, Tel Aviv. She served as guest violin faculty member at the Oberlin Conservatory of Music in 2012 and 2013, and frequently leads master classes nationally and abroad.

Ms. Zhulla (Pre-College ’04; BM ’08; MM ’10) studied at Juilliard with Itzhak Perlman and Catherine Cho, and was a recipient of the George and Marie Vergottis Scholarship. Other teachers include Pinchas Zukerman, Patinka Kopec and her father, Lefter Zhulla.

About the Juilliard String Quartet

With unparalleled artistry and enduring vigor, the Juilliard String Quartet continues to inspire audiences around the world. Founded in 1946, and widely known as “the quintessential American string quartet,” the Juilliard draws on a deep and vital engagement to the classics, while embracing the mission of championing new works, a vibrant combination of the familiar and the daring. Each performance of the Juilliard Quartet is a unique experience, bringing together the four members’ profound understanding, total commitment, and unceasing curiosity in sharing the wonders of the string quartet literature.

Having celebrated its 70th anniversary last season, the Juilliard String Quartet marked the 2017-18 season with return appearances in Seattle, Santa Barbara, Pasadena, Memphis, Raleigh, Houston, Amsterdam, and Copenhagen. It continued its acclaimed annual performances in Detroit and Philadelphia, along with numerous concerts at home in New York City, including appearances at Lincoln Center and Town Hall. Adding to its celebrated discography, the JSQ released a new album featuring the world premiere recording of
Mario Davidovsky’s Fragments (2016), together with Beethoven Quartet Op. 95 and Bartók Quartet No. 1, which will shortly be issued on the SONY label. Highlights of concert programming throughout the 2017-18 season include other visionary works by Beethoven, Bartók, and Dvořák, as well as James MacMillan’s haunting and evocative Quartet No. 2, Why Is This Night Different? (1998).

The Juilliard String Quartet’s groundbreaking interactive app on Schubert’s Death and the Maiden, was released in 2015 by the innovative app developer Touchpress jointly with Juilliard. Both the app and the JSQ’s 2014 recording of the Death and the Maiden are available on iTunes. Celebrating one of the great collaborative relationships in American music, Sony Classical’s reissue of the Juilliard Quartet’s landmark recordings of the first four Elliott Carter String Quartets together with the 2013 recording of the Carter Quartet No. 5 traces a remarkable period in the evolution of both the composer and the ensemble. The quartet’s recordings of the Bartók and Schoenberg Quartets, as well as those of Debussy, Ravel and Beethoven, have won Grammy Awards, and in 2011 the JSQ became the first classical music ensemble to receive a lifetime achievement award from the National Academy of Recording Arts and Sciences.

Devoted master teachers, the members of the Juilliard String Quartet offer classes and open rehearsals when on tour. The JSQ is string quartet in residence at Juilliard and its members are all sought-after teachers on the string and chamber music faculties. Each May, they host the five-day internationally recognized Juilliard String Quartet Seminar. During the summer, the JSQ works closely on string quartet repertoire with students at the Tanglewood Music Center. 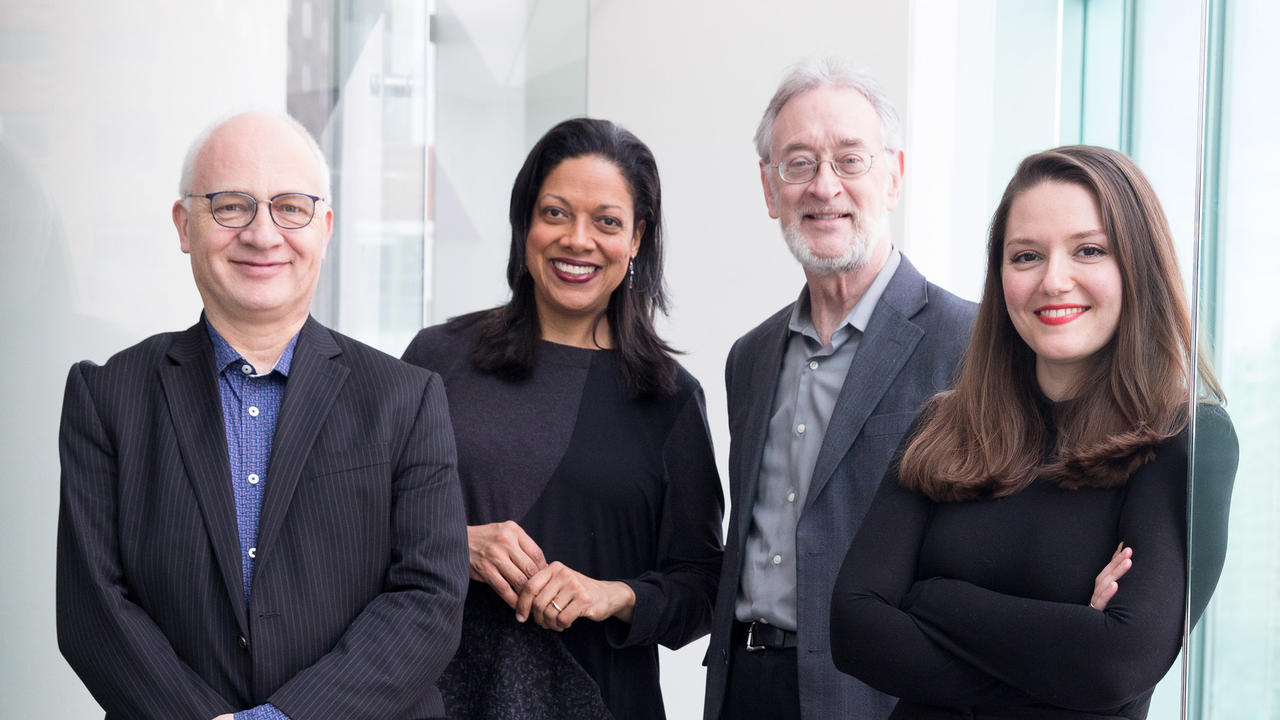