Drama Alum on Coming Back to Juilliard 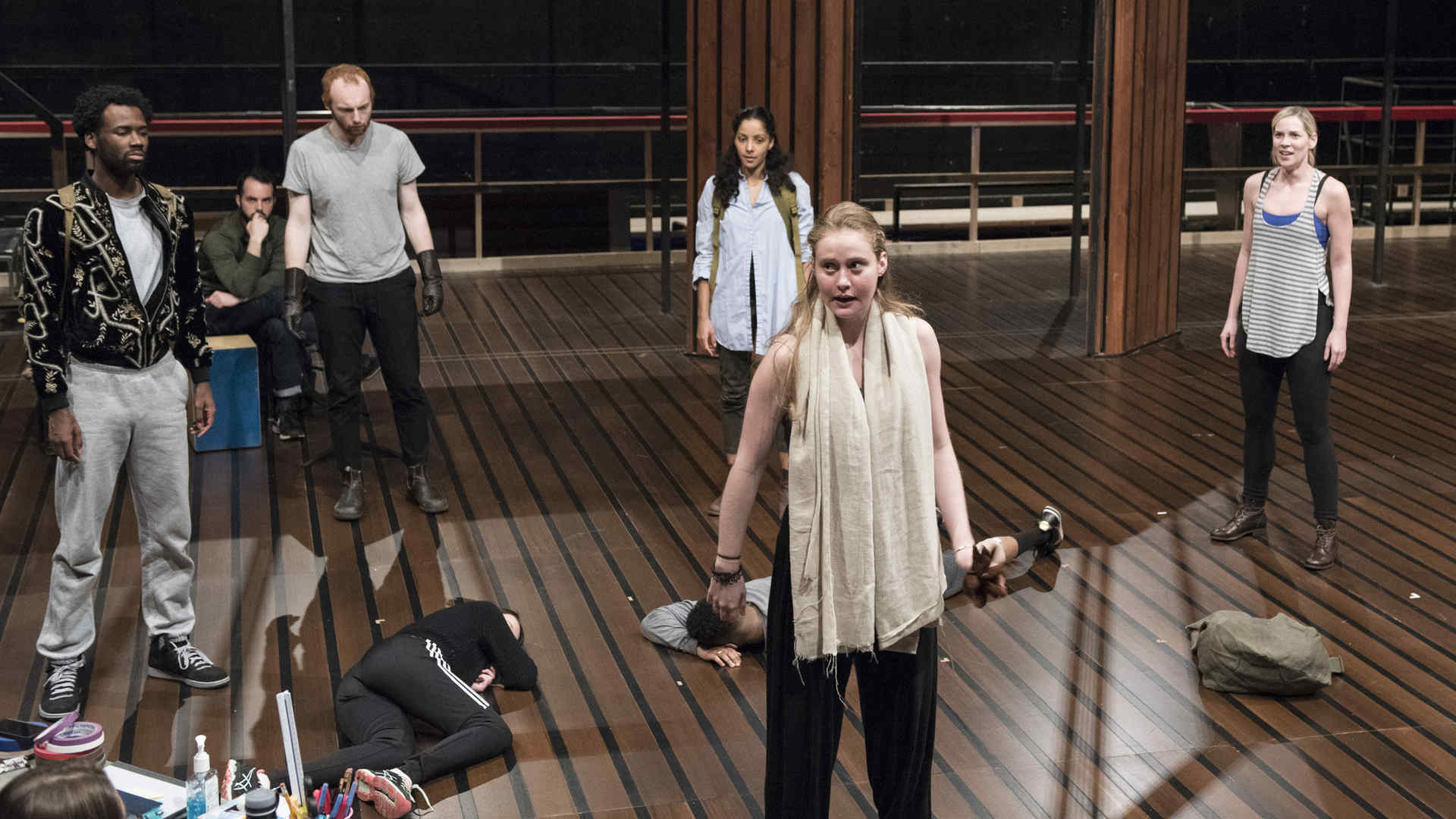 One of President Polisi’s early goals was to have a student newspaper and thus the Juilliard Journal was born. The Voice Box, Polisi once wrote in the Journal, was created “to give our students a chance to express themselves on a wide variety of topics, ranging from the performing arts to local and world politics. It has always been my hope that Juilliard students would feel a responsibility to be knowledgeable about their world and to become leaders in whatever profession they would choose after graduation.” The first one—about “what is inimitable about Juilliard” by cellist Sarah Koo—appeared in September 2001. A few years ago we broadened the definition so that faculty and staff members and alumni could also contribute.

This edition is by Victoria Pollack, who graduated with Group 46 last year and wrote frequently for the Journal, mostly about drama and the many community engagement projects in which she was involved. Pollack was also one of last year’s winners of the Joseph W. Polisi Prize, and she’s co-chairing the Polisi alumni celebration on May 24—find out more here.

I wish there was a word for the feeling of returning to a place you’ve left. No matter how familiar or welcoming or needed it is, there is somehow a squishy, empty space between that home as you knew it and the way it’s changed since. (If you happen to know of such a word, please enlighten me.)

I confess I’ve encountered that feeling returning to Juilliard as a performer and assistant to director Tyne Rafaeli for the third-year production of Richard II, which opens May 4. It’s a humbling return and one that has given me immense compassion for Richard’s journey through the play. Though the Juilliard architecture is the same, the studios still have the same stark white/black contrast, and the students are still starved for Vitamin D, somehow the landscape is altered; there’s a Starbucks kiosk where there were once Pre- College bake sales, new faces neighbor familiar ones, and a bold blue “Juilliard” graphic hangs in the lobby instead of the previous pop-art ones (now exiled to the fourth floor).

Truthfully, returning to Juilliard as an alumna almost a year after graduating is both a welcome reprieve and strangely uncomfortable. We are drowning in riches at Juilliard. Within seconds of commencement, classmates dive into blazing glory. So-and-so booked a television show. So-and-so is on Broadway with such-and-such celebrity. So-and-so is touring internationally with that amazing world-renowned headliner we’ve adored for years. So-and-so is headlining! (WOW! EVERYONE IS DOING AMAZING THINGS! And what am I doing?)

Since graduating I’ve spent a great deal of time auditioning— like many Juilliard alums—and a much greater amount of time working as a producer for an entertainment company. Though the “compare and despair” demons are wont to creep in when compared with my classmates who are “making it” as performing artists, I’ve found that, ironically, working the 9–5 (or more often 9–9) of office management, client meetings, and production work has offered me some great acting insights. Who knew? 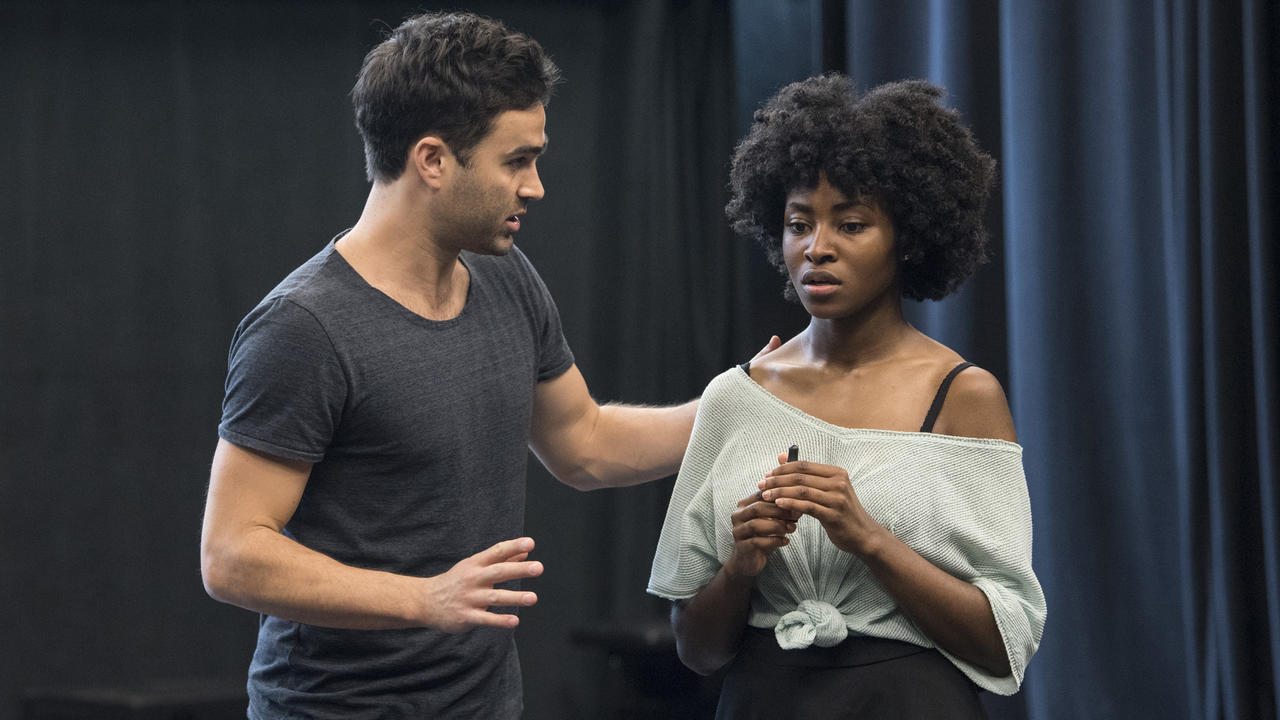 A rehearsal for the third-year Shakespeare rep 'Romeo and Juliet'

But back to Juilliard. In December Richard Feldman, acting director of the Drama Division, asked if I would be interested in acting in and assisting on Richard II. I found myself bizarrely excited and embarrassed; I was intrigued at the idea of working with Tyne and desperate to get back to acting, and yet I felt this wave of shame that the only acting job I’d been offered was back at Juilliard. Was it a pity offer that I hadn’t “made” it by someone else’s standards? A step backward? Evidence of my need of a remedial opportunity to get to the place I should have been in my own third year of training?

Brilliant though the opportunity was—and it took me a while to realize that it was—walking into the building for the first rehearsal, I felt as though I had a ton of bricks strapped to my chest. But when I stepped into Room 301 and was welcomed by peers and former teachers, I felt relieved. And as I listened to the designers talk about their brilliantly mutable sets and multifaceted costumes, and sat at the familiar folding tables hearing a beautiful play aloud, my love for the process overcame any shred of shame. I found myself breathing more freely for the first time in a year and soon fell back into the welcome rigors of rehearsals, this time finding my experiences as a producer aiding my understanding of the play in ways I never could have imagined.

Richard II is phenomenal. Its brilliance lies in the ways it presents and complicates the descent of one king and the rise of another (Henry IV, in case your history is a bit rusty). Armed with rich arguments, poetically articulated, the people in this world are smart, strategic, strikingly brazen, and familiar. Though there isn’t a one-to-one comparison with current political situations, Tyne has tasked the company with interrogating the psychology of power, inviting an exploration of and humility toward those with authority, an invitation I find particularly apt given the changes of leadership within the Juilliard community— especially within the Drama Division [Evan Yionoulis will begin as director this summer] and the transition from President Polisi to President Woetzel.

Though Richard II does not place judgment on leadership style, it does caution that people ought not judge the throne unless they’ve sat on it. No one can imagine what it’s like to be king except for a king. No one can fathom the number of decisions, the pressures that come with the expectation of leadership, or the challenges of being expected to be invulnerable, other than those who hold positions of power. And no one can fully appreciate or even articulate the legacy of a leader until they experience it in contrast with new leadership. Richard II reminds us that leadership is cyclical, with ascent and descent embedded in the human experience.

I guess we never really know in advance which opportunities will offer us an ascent, though the experiences from the past year have certainly shown me that any opportunity that grants humility and grace is absolutely worth taking.

Voice Box is an opinion column and does not necessarily reflect the views of Juilliard. The Journal welcomes columns on any topic by Juilliard students, faculty, staff, or alumni. To submit, email [email protected]