Fully-Staged Production of Purcell’s Dido and Aeneas in February 2019 at Juilliard With a European Tour to London, Versailles, and Athens in June 2019

New Commissions for Period String Quartets Inspired by Haydn’s Seven Last Words of Christ to Be Premiered in a Holy Week Concert on April 16 at the Cathedral of St. John the Divine

Juilliard415 and the Yale Schola Cantorum Join Forces to Perform Haydn’s Lord Nelson Mass and a New Commission by Polish Composer Paweł Łukaszewski in May 2019 in New York and New Haven, and on Tour in Scandinavia, May 21-June 2

Making his Juilliard debut, Italian-born oboist and conductor Alfredo Bernardini directs Juilliard415 in “Vivaldi, His Friends and Enemies” on Sunday, November 11 as part of the Music Before 1800 series at Corpus Christi Church. The spectacular Baroque specialist Alfredo Bernardini makes a rare U.S. appearance as part of this program, bringing his vivid musicality to this theatrical program of Italian concertos and sinfonias from the early 18th century. Concertos by Marcello and Vivaldi are paired with rarely-heard works by composers like Antonio Lotti and Baldassare Galuppi in a concert that pairs Vivaldi’s music with that of his contemporaries, both friends and enemies.

Artist in residence William Christie and his musical protégé Paul Agnew, who makes his Juilliard debut, will each lead a program (William Christie on Monday, November 19, at the Morgan Library and Paul Agnew on Saturday, December 1, at Alice Tully Hall) that explore the fearless creativity of Handel during the composer’s fruitful years as a young man in Rome. The programs, with singers from Juilliard’s Marcus Institute for Vocal Arts, feature Handel’s early dramatic chamber cantatas.

Juilliard Opera presents Henry Purcell’s Dido and Aeneas, conducted by Avi Stein and directed by Mary Birnbaum, on Wednesday, February 20, Friday, February 22, and Sunday, February 24 in Juilliard’s Willson Theater. One of the most widely-produced English-language operas, Dido and Aeneas is based on the story of Dido, queen of Carthage, and the prince of Troy, Aeneas, with a libretto by Nahum Tate. First performed in 1689, it is perhaps most famous for Dido’s lament, “When I am laid in earth.” Performances follow in mid-March in Aiken, South Carolina at the Joye in Aiken! festival. In June, Juilliard415 and singers from Juilliard’s Marcus Institute for Vocal Arts will tour together for the first time, taking the Juilliard Opera production of Purcell’s Dido and Aeneas to Europe with performances at London’s Holland Park, the Opéra Royal at Versailles and at the Odeon of Herodes Atticus in Athens.

Juilliard415’s first international performance of the season is with artist in residence Rachel Podger in a program of Handel and Vivaldi on Wednesday, March 27, at the Isabel Bader Centre in Kingston, Ontario, followed by a New York performance on Friday, March 29, in Alice Tully Hall.

On Tuesday, April 16, Juilliard415 breaks new ground by presenting “The Seven Last Words Project,” an evening-length event that features seven new works by seven composers, all of whom will write a response for period string quartet to one of the sonatas of Haydn’s Seven Last Words of Christ. The composers who have been commissioned are Reena Esmail, Colin Jacobsen, Tania León, Jessica Meyer, Nico Muhly, Paola Prestini (all graduates of Juilliard), the Pulitzer Prize-winning Caroline Shaw, and a seventh composer (tbd). The premieres will take place during Holy Week, on Tuesday, April 16, at the Cathedral of St. John the Divine.

Another world premiere marks the second collaboration of the season between Juilliard415 and Yale Schola Cantorum. Polish composer Paweł Łukaszewski has been commissioned to write an oratorio for period instruments and choir, in a program that will also feature Haydn’s Lord Nelson Mass. Performances take place Friday, May 3, at Woolsey Hall in New Haven and on Saturday, May 4, in Alice Tully Hall. A tour to Scandinavia from May 21 to June 2 follows with performances in Copenhagen, Lund, Stockholm, Helsinki, and Oslo.

Juilliard Historical Performance continues its free lunchtime concert series, Tuesdays at Twelve, at Holy Trinity Lutheran Church (65th Street and Central Park West). The hour-long concerts take place on October 16, December 11, February 26, and April 23 (all on Tuesdays at noon) and feature chamber music performed on period instruments. The 110-year-old church is the home of the celebrated Bach Vespers series. These concerts are free, and no tickets are required. The series is an extension of Juilliard’s long-running, free lunchtime performance series that takes place during the school year on Wednesdays in Alice Tully Hall.

Residencies and master classes are an important part of the Juilliard Historical Performance program and give Juilliard musicians a chance to work closely with a who’s who list of early music specialists. Among others to be announced, cellists Kristin von der Goltz (October 17) and Elinor Frey (November 14) will give master classes.

Juilliard's full-scholarship Historical Performance program was established and endowed in 2009 by the generous support of Bruce and Suzie Kovner.

Ouverture and Dances from Zoroastre

Ouverture and Dances from Naïs

Dances and Chaconne from Dardanus

Programmed and prepared by Richard Egarr

“Vivaldi, His Friends and Enemies”

“Handel in Rome I”

Juilliard415 and Yale Schola Cantorum will tour this program in Scandinavia from May 21 through June 2 with concerts in Copenhagen, Lund, Stockholm, Helsinki, and Oslo.

In June, Juilliard415 and singers from Juilliard’s Marcus Institute for Vocal Arts will tour together for the first time, taking Juilliard Opera’s production of Purcell’s Dido and Aeneas to Europe with performances at London’s Holland Park, the Opéra Royal at Versailles, and the Odeon of Herodes Atticus in Athens.

Tickets for Juilliard Historical Performance concerts in the Peter Jay Sharp Theater and concerts in Paul Hall are $20 ($10 for full-time students with a valid ID) and will be available September 20, 2018, at juilliard.edu/calendar or in person at the Juilliard Box Office.

Ticket information for off-campus, including national and international tours, may be obtained on venue websites.

Since its founding in 2009, Juilliard415, the school’s principal period-instrument ensemble, has made significant contributions to musical life in New York and beyond, bringing major figures in the field of early music to lead performances of both rare and canonical works of the 17th and 18th centuries. The many distinguished guests who have led Juilliard415 include Harry Bicket, William Christie, Monica Huggett, Ton Koopman, Nicholas McGegan, Rachel Podger, Jordi Savall, and Masaaki Suzuki. Juilliard415 tours extensively in the U.S. and abroad, having performed on five continents with notable appearances at the Boston Early Music Festival, Leipzig Bachfest, and Utrecht Early Music Festival (where Juilliard was the first-ever conservatory in residence), and on a 10-concert tour of New Zealand. With its frequent musical collaborator, the Yale Institute of Sacred Music, the ensemble has played throughout Italy, Japan, Southeast Asia, the U.K., and India. Juilliard415, which takes its name from the pitch commonly associated with the performance of Baroque music, A=415, has performed major oratorios and fully staged productions: Handel’s Agrippina and Radamisto; Bach’s Matthew and John Passions; Cavalli’s La Calisto; and performances in the U.S. and Holland of Bach’s Mass in B Minor conducted by Ton Koopman. The ensemble’s most recent international appearances were in Bolivia, in a tour sponsored by the U.S. Department of State that marked the ensemble’s South America debut. The 2017-18 season was notable for the Juilliard debuts of the rising conductor Jonathan Cohen and the Belgian vocal ensemble Vox Luminis, a side-by-side collaboration with Philharmonia Baroque in San Francisco, as well as return visits by Rachel Podger, William Christie, an all-Bach concert with Maestro Suzuki, and the rare opportunity to see a fully-staged production of Rameau’s Hippolyte et Aricie. This season’s international schedule includes performances in Canada, London, Athens, Versailles, and throughout Scandinavia. In New York, Juilliard415 welcomes Paul Agnew and Alfredo Bernardini for their Juilliard debuts.

Juilliard’s full-scholarship Historical Performance program offers comprehensive study and performance of music from the 17th and 18th centuries on period instruments. Established and endowed in 2009 by the generous support of Bruce and Suzie Kovner, the program is open to candidates for the Master of Music, Graduate Diploma, and Doctor of Musical Arts degrees. A high-profile concert season of opera, orchestral, and chamber music is augmented by a performance-oriented curriculum that fosters an informed understanding of the many issues unique to period-instrument performance at the level of technical excellence and musical integrity for which Juilliard is renowned. The faculty comprises many of the leading performers and scholars in the field. Frequent collaborations with Juilliard’s Ellen and James S. Marcus Institute for Vocal Arts, the integration of modern-instrument majors outside of the Historical Performance program, and national and international tours have introduced new repertoires and increased awareness of historical performance practice at Juilliard and beyond. Alumni of Juilliard Historical Performance are members of many of the leading period-instrument ensembles, including the Portland Baroque Orchestra, Les Arts Florissants, Mercury, and Tafelmusik, as well as launching such new ensembles as the Sebastians, House of Time, New York Baroque Incorporated, and New Vintage Baroque. 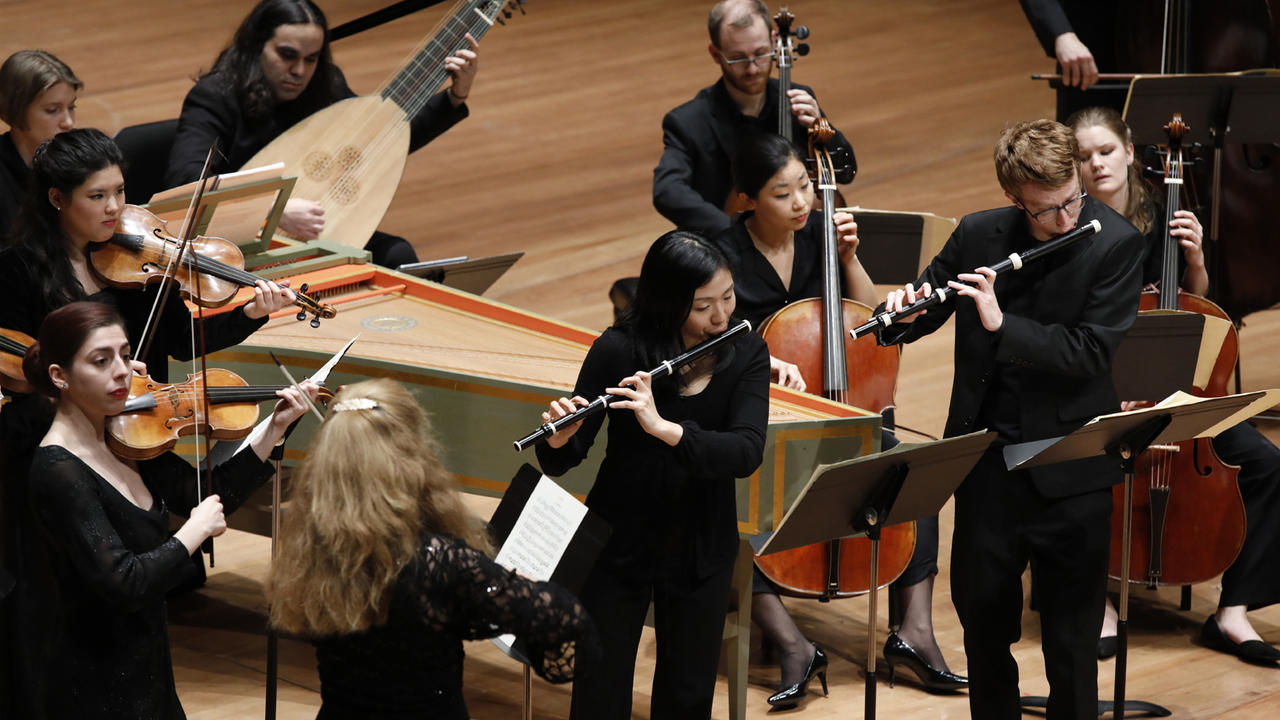