A Q&A With Damian Woetzel 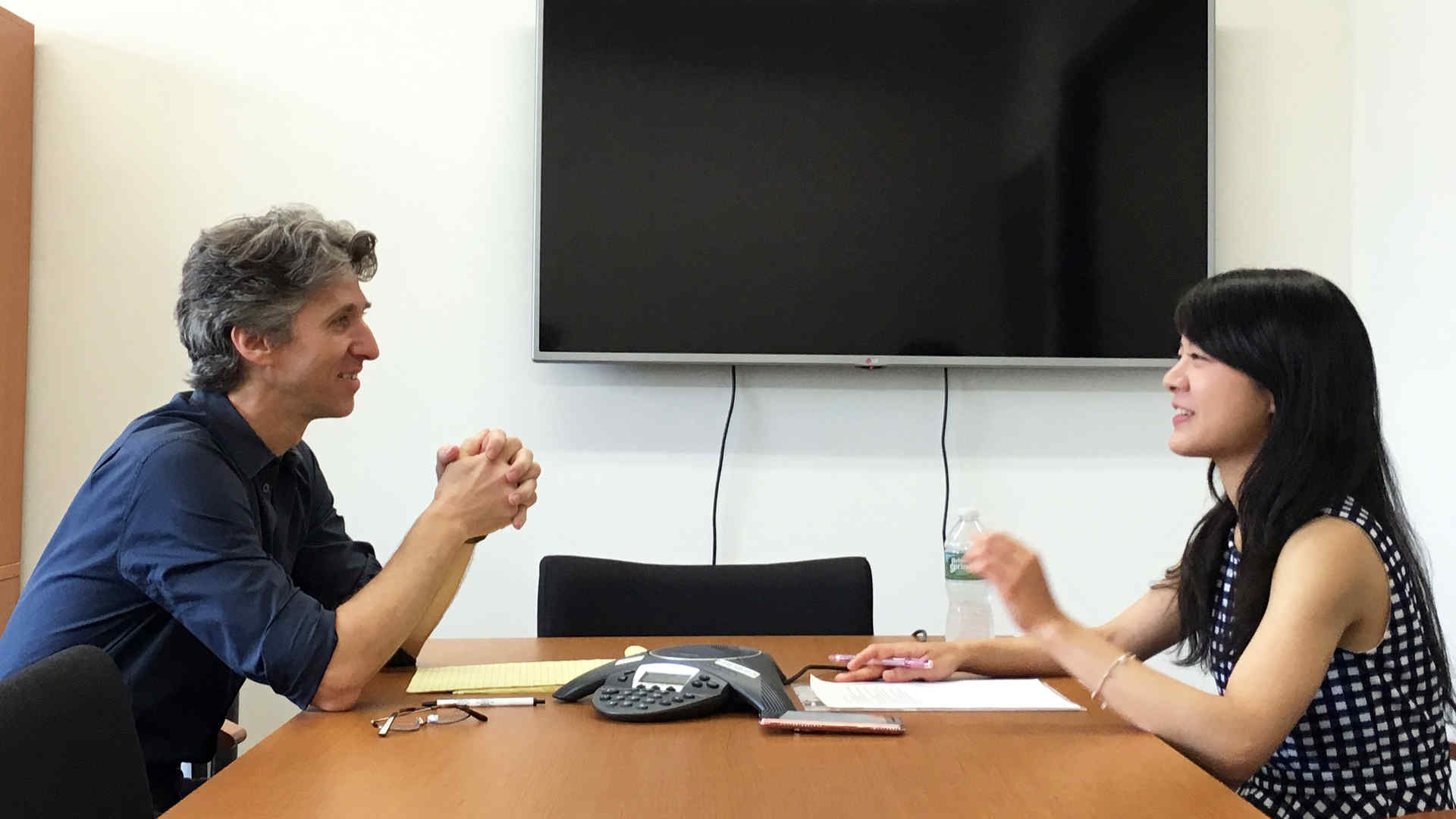 Chatting With the New President

Prior to becoming Juilliard’s seventh president, in July, Damian Woetzel spent most of a year working closely with his predecessor, Joseph Polisi. While he was here to learn all he could about the school and the community, Woetzel was no stranger to Juilliard, having first entered the building as a 15-year-old School of American Ballet student (SAB was housed on Juilliard’s third floor at the time). “The whole feeling of this building, with everyone mixed together, was, in the end, what probably drew me most to the possibility of this position, because synergy and interdisciplinary possibilities and relationships between people and between disciplines exist here like nowhere else in the world,” Woetzel said recently. He was speaking with violinist Sumire Hirotsuru not long after she received her master’s. Here are some excerpts from their conversation.

What was your reaction when you heard you would be the next president?
I felt tremendous excitement at the sense of possibility and also a sense of the gravity of the responsibility. This is, in the end—and the beginning and the middle—about students, and about their futures, and about what they will gain from their time here, not only as artists but as people. The work that goes on here is magic, but I also look for how it connects to everything else, and how it enhances the art form and the artist. If you think about all the resources in New York City and how the people who come in this building will affect the world—wow, there’s so much possibility here. What Juilliard sends out into the world is the future of performing arts. And with that comes our responsibility to foster an ever more inclusive and representative student body that will embody creative excellence on the stages of the future. I’m energized by the potential we have to foster richly diverse creative expression at the highest levels.

What have you learned in the past year here?
As I’ve been talking with people throughout the building, I keep saying, “Tell me, tell me, tell me,” and then the conversations led to “Can we imagine…? Could we try to do …?” I’ve talked to so many alums about pivotal moments here that changed how they thought—and often it was that they were involved in a collaboration, and at the time it was so hard to find the time to do it, but that’s the thing they remember most now.

In my life as a director, I think in terms of layers. So if a project is a dance and a commissioned piece of music, then I might ask, “Okay, what else is going here? Is there a narrative? Is there a visual arts component? What is everybody adding, and what’s the next step for each of them?” And when I look at Juilliard, of course, there are 850 [students’] next steps, plus the faculty’s next steps, plus the institution’s next steps after more than a century. The ripples keep going out and out.

I’ve watched the Who’s in the Lobby? series on Juilliard’s YouTube channel, which features performers in multiple art forms. Are you envisioning more crossdivision collaborations?
Juilliard has always been generative as well as simply a place of training—it creates voice, as opposed to simply refining voice, and my intention is to really push and incentivize the creation of projects across the school. Historically, creative spurts in art often happen when collaborations take hold. Think about the Ballets Russes era, with Picasso, Stravinsky, and Balanchine—and look at the possibilities when you have those edges next to each other. Creativity is a learning tool—it’s not just decorative and beautiful, it also helps you learn and understand things you wouldn’t ordinarily while building deep and critical thinking as well as passion-driven learning.

Will you be teaching at Juilliard?
Dr. Polisi taught an arts and society course, and I’m going to take up the mantle in the fall. I’ve taught in different ways over the years, most recently at Harvard Law School with a professor there named Jeannie Suk, who studied at Pre- College and also at the School of American Ballet. We taught a course on law and performing arts, and it’s a natural next step to examine other connections between art and society. The Juilliard course will touch on a variety of different areas with a series of guests, and I hope to have the guests speak to the school at large whenever possible.

What advice did Dr. Polisi give you?
He’s been a tremendous influence for me for many years. I’d read his book The Artist as Citizen, and when I first met him I told him about how it had changed my life. Since then, we’ve been friends, and in this last year he’s been my mentor. Among many things, he talked about the levels of instinct this job required and how important it is to take the time to listen. It’s lovely and reassuring that he’ll still be working with us as chief China officer for our new school in Tianjin. As I move into what I think I’ll always consider Joseph’s office, I’m bringing some of my own furniture to make it feel more like home, which also gives us the chance to share Joseph’s furniture with the rest of the building—a great reflection of how he’ll remain ever-present with all of us.

You have a long association with Lincoln Center…
I was here at the New York City Ballet for 23 years, I also guested at Metropolitan Opera, and I danced in most of the theaters here in one way or another, so Lincoln Center is very much home. I remember the first night I walked out on the State Theater stage, looking up at how the lights kept going up all the way to the back, and I remember incredible times warming up on stage by myself, feeling the ghosts in the theater and imagining being a part of that continuum.

How do you think about being the first Juilliard president who was a dancer?
In so many ways, you don’t know how things are going to shape your life until later. As a child, I studied the guitar, flute, and music theory at a conservatory while I was also studying ballet, and then at a certain point, I narrowed in on ballet. But I’ve always had this relationship with music that was built in that early time, and I’ve gotten deeply involved in the intersection of music and dance, particularly in my post-stage career. To me, music relates to everything else, and I would say the same about theater. I’ve had the honor of working in several dramatic works, including playing Riff in West Side Story, cast and coached by Jerome Robbins himself. That sense of theater has always been a part of dance’s heritage.

Do you still play music?
I play guitar a little bit, and a family member recently gave me a book of flute études, so we’ll see. But that’s definitely on the side. And I don’t dance anymore, but I do a little show and tell.

What advice do you have for Juilliard students?
Take advantage of the extraordinary opportunities in this building. Tap into New York and its incredible resources, not only in the performing arts but also in visual arts, ideas, and thinking. Reflect on the tremendous impact art can and does have in community, and in our society. All these ingredients are going to be part of creating your voice at Juilliard.

Since graduating, Sumire Hirotsuru (MM ’18, violin) has toured with Juilliard415 to Leipzig, Germany; she also performed at festivals in Texas, New York City, Virginia, Vermont, and Connecticut as well as one she started several years ago in her hometown in Japan. This fall she's launching Smilee Entertainment, an entertainment business services company, and continuing to perform and teach in New York City.