Focus Will Be on “A Juilliard Ever Stronger, Ever More Inclusive, and Ever More Creative”

Renewed Emphasis on Equity, Diversity, Inclusion, and Belonging Including a New Collaboration With the Sphinx Organization

NEW YORK –– Juilliard President Damian Woetzel announced several key initiatives and new projects aimed to advance Juilliard’s excellence and impact in his first address to the Juilliard community, on September 4. During the convocation ceremony, which also featured performances by Juilliard students, faculty, alumni, and some of the newly announced Creative Associates, Woetzel outlined his plans to build on Juilliard’s tradition of excellence while also focusing on creative enterprise and inclusivity in the arts.

In his keynote address, Woetzel also articulated his belief that Juilliard can provide a stage for an ever-wider range of collaboration that breaks new artistic ground and supports students and faculty for innovative and multifaceted careers in the arts. “Today’s artists are entrepreneurs, educators, leaders, collaborators, and change agents. Their careers are imagined, reimagined, and applied in ever more inventive and community-building ways. We can encourage greater levels of collaboration to blend our talents and forge innovative new approaches. And in so doing, we spark and re-spark our imaginations and refresh our artistic expression.”

Creative Associates
Toward this goal, Woetzel announced the Juilliard Creative Associates Program. This new initiative brings in artists at the top of their fields who exemplify collaborative excellence. They will lead workshops and discussions, teach classes, and collaborate with faculty and students to generate new, interdisciplinary work across the school’s divisions. The inaugural group for the 2018-19 school year includes bandleader and Juilliard alumnus Jon Batiste, dancers and choreographers Lil Buck and Michelle Dorrance, actor and clown Bill Irwin, and musician and composer Caroline Shaw.

“I am so excited to be part of the inaugural class of Creative Associates,” said bandleader, pianist, composer, and alumnus Jon Batiste. “The essence of my work has been collaboration: unlocking the joy of unexpected artistic connections. I’m thrilled to return to Juilliard, where I met so many people who are a part of my artistic family, to help young artists learn to collaborate, communicate, and most importantly, share their art with the world.”

Full details on public programming will be announced. Juilliard’s creative enterprise programming, including the Creative Associates program, is generously supported by Jody and John Arnhold.

Equity, Diversity, Inclusion, and Belonging (EDIB)
A cornerstone of Woetzel’s vision is the belief that Juilliard is uniquely positioned to take a leadership role in the critical work of advancing equity, diversity, and inclusion in the arts, both at Juilliard and in the cultural sector.

“We must be intentional and proactive in fostering a robust representation of experiences and perspectives within our community,” Woetzel said. “I believe deeply in Juilliard as a community where each of us ‘belongs,’ and that education cannot be its best without being fully inclusive.”

In addition to a renewed focus on training and curriculum as well as public performances and other programming focused on diversity in the performing arts, Woetzel also outlined a new collaboration with the Sphinx Organization, the Detroit-based national entity focused on increasing diversity in the arts. In summer 2019, the organizations will collaborate on the new Sphinx Performance Academy at Juilliard. The Sphinx Performance Academy (SPA) is a full-scholarship summer chamber music and solo performance program designed for string players, ages 11-17. As a program with a primary focus on cultural diversity, SPA seeks to actively recruit and engage students from cultural backgrounds that are underrepresented in the field of classical music.

“Sphinx is excited to expand upon its partnership with Juilliard under the visionary leadership of Damian Woetzel,” said Afa Dworkin, president and artistic director of the Sphinx Organization. “The transformative power of diversity can only be realized through sustained, shared, consistent effort. Together with this legendary institution, we look forward to creating new opportunities for the next generation of our leaders.”

The school plans to announce more details about EDIB initiatives, including new funding and additional programming, in coming months.

JuilliART
Another new initiative announced at convocation was JuilliART, which will bring visual perspectives into the common spaces of the Juilliard community. The initiative “is designed to inspire and to challenge,” Woetzel said. “When art surrounds us, it nourishes our spirit.”

Currently on display in Juilliard’s June Noble Larkin Lobby are works by the late American artist Keith Haring (1958-90), generously on loan from the Keith Haring Foundation for the 2018-19 school year. The five lithographs that comprise the Stones (1989) portfolio are displayed with the steel sculpture Boxers (1987), exemplifying Haring’s philosophy that “Art is for everyone.”

The Arts in Society
Woetzel will also continue the tradition of teaching a course—“The Arts in Society”—created by Juilliard President Emeritus Joseph W. Polisi. Woetzel will invite a series of guest lecturers from a wide variety of fields to speak to how the arts intersect with and can help shape the world today. The roster includes Elizabeth Alexander, poet and president of the Andrew W. Mellon Foundation; violinist Vijay Gupta, a Juilliard alumnus and co-founder of Street Symphony; Mitch Landrieu, former mayor of New Orleans; and composer and Juilliard Creative Associate Caroline Shaw. Select guests will also participate in free public programs along with other invited artists.

Damian Woetzel is the seventh president of The Juilliard School. Since retiring in 2008 from a 20-year career as a principal dancer with New York City Ballet, Woetzel has taken on multiple roles in arts leadership, including artistic director of the Vail Dance Festival since 2007, and director of the Aspen Institute Arts Program (2011-18). As an independent director, choreographer, and producer, his recent projects include DEMO at the Kennedy Center; Spaces by Wynton Marsalis for Jazz at Lincoln Center; Kennedy Center Honors tributes to Natalia Makarova, Patricia McBride, and Carmen de Lavallade; an arts salute to Stephen Hawking for the World Science Festival; two Turnaround Arts performances at the White House and the first performance of the White House Dance Series, all hosted by Michelle Obama. Woetzel has collaborated on numerous performances and initiatives with Yo-Yo Ma, including the Silk Road Connect program in the New York City public schools. In 2009, Woetzel became the founding director of the Jerome Robbins Foundation’s New Essential Works (NEW) Program, a five-year program that initiated grants to support the production of 35 new dance works. In 2009, President Obama appointed Woetzel to the President’s Committee on the Arts and Humanities, and he served throughout the Obama administration. Woetzel holds a Master in Public Administration degree from Harvard’s Kennedy School of Government and has been a visiting lecturer at Harvard Law School. He received the Harvard Arts Medal in 2015, and is a member of the American Academy of Arts and Sciences.

Located at Lincoln Center in New York City, Juilliard offers undergraduate and graduate degrees in dance, drama (acting and playwriting), and music (classical, jazz, historical performance, and vocal arts). Currently more than 800 artists from 43 states and 41 countries are enrolled at Juilliard, where they appear in over 700 annual performances in the school’s five theaters; at Lincoln Center’s Alice Tully and David Geffen halls and at Carnegie Hall; as well as other venues around New York City, the country, and the world. 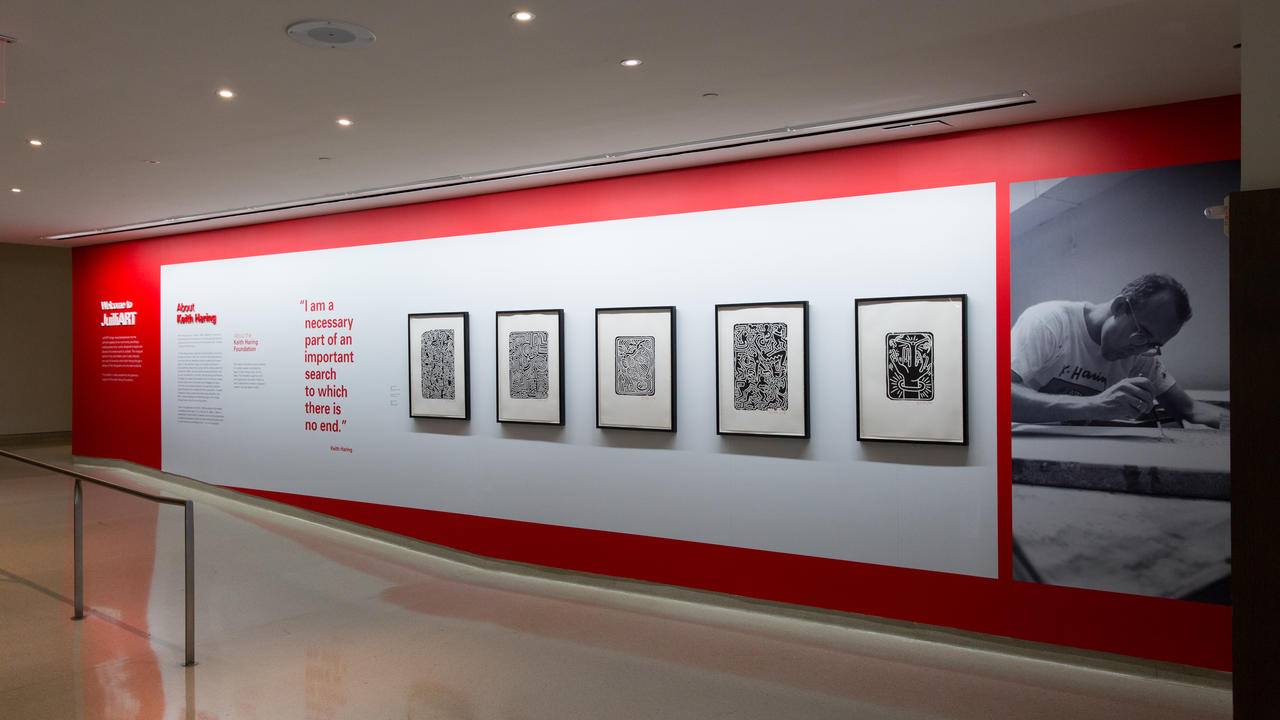 Currently on display in Juilliard’s June Noble Larkin Lobby are works by the late American artist Keith Haring (1958-90), generously on loan from the Keith Haring Foundation for the 2018-19 school year. (photo by Claudio Papapietro)