Juilliard Opera Presents Benjamin Britten's "The Turn of the Screw," Conducted by Steven Osgood and Directed by John Giampietro, in November 2018

NEW YORK –– Juilliard’s Ellen and James S. Marcus Institute for Vocal Arts, under the leadership of Artistic Director Brian Zeger, opens its opera season with Britten’s The Turn of the Screw, featuring Juilliard singers and the Juilliard Orchestra, conducted by Steven Osgood and directed by John Giampietro, on Wednesday,
November 14 and Friday, November 16, 2018, at 7:30pm, and Sunday, November 18, 2018, at 2pm in Juilliard’s Peter Jay Sharp Theater.

The Turn of the Screw was Britten’s final chamber opera and was written in just four months in 1954. “The work is based on the novel by Henry James: a tale of good versus evil, natural versus the supernatural, possession and exorcism, set within the domestic proprieties of the English country house of Bly.” (Britten-Pears Library) The opera had its world premiere at Venice’s Biennale with the English Opera Group, directed by Basil Coleman and conducted by Benjamin Britten, on September 14, 1954, at the Teatro La Fenice in Venice.

This performance is part of Juilliard Opera, a program dedicated to the education and training of future generations of singers. Juilliard Opera is supported by the vision and generous lead funding of the International Foundation for Arts and Culture and its chairman, Dr. Haruhisa Handa.

Steven Osgood is entering his fourth season as general and artistic director of the Chautauqua Opera Company, which in 2019 features productions of Il barbiere di Siviglia, ¡Figaro! (90210), and The Ghosts of Versailles. As artistic director of American Opera Projects (2001-8) he founded the company’s acclaimed Composers and the Voice Fellowship program. He has conducted the world premieres of more than twenty operas, including Breaking the Waves, JFK, The Long Walk, and As One. He returns as conductor-mentor for Washington National Opera’s 2019 American Opera Initiative, leading the premieres of 75 Miles, Relapse, and Pepito at the Kennedy Center. In February he returns to Opera Columbus conducting the world premiere of The Flood by Korine Fujiwara and Juilliard faculty member Stephen Wadsworth.

John Giampietro is a director of theater and opera, whose productions have been seen at Juilliard, the Ensemble Studio Theater, Actors Theatre of Louisville, Yale School of Music, Urban Stages, Curtis Institute of Music, and Shenandoah Conservatory of Music. He teaches first- and third-year acting in the Juilliard’s Vocal Arts department and is the resident stage director for the Chautauqua Institution Festival of Music voice program. He is an artist-member of the Ensemble Studio Theatre where he is a frequent director with its Obie-award-winning playwright’s group, Youngblood. His writing includes an English version of Mozart’s The Impresario, a new English dialogue version of Die Zauberflöte, and the play Strength of God and other grotesques based on Sherwood Anderson's Winesburg, Ohio.

American soprano Katerina Burton has performed such notable roles as Lola Markham in Douglas Moore’s Gallantry, the title role in Puccini’s Suor Angelica, Erste Dame in Mozart’s Die Zauberflöte, and the Fairy Godmother in Cinderella with Annapolis Opera. She most recently placed in Annapolis Opera’s 29th Annual Vocal competition, in addition to receiving an Encouragement Award from the Metropolitan Opera National Council Auditions Mid-Atlantic Region. She is completing her graduate studies at Juilliard under the tutelage of Robert C. White Jr. She holds the Laron Varon Lewis Award in Voice; the Lorraine Rita Grunin Scholarship; and the Philo Higley Scholarship.

Britt Hewitt is a soprano and singer/songwriter from Jacksonville, Florida. In 2016, she graduated from Booker T. Washington High School for the Performing and Visual Arts in Dallas, where she portrayed Pamina in The Magic Flute and Chrissy in Hair, among others. Hewitt has interned at The Dallas Symphony Orchestra and attended the Recording Academy’s Grammy Camp Nashville. She is currently a third-year undergraduate at Juilliard, where she is pursuing her bachelor of music degree under the tutelage of Sanford Sylvan. At Juilliard, she has portrayed Mistress Quickly in Die lustigen Weiber von Windsor, participated in the Gluck Fellowship program, and serves as student council vice president. In January, she will have her New York Songwriters Circle debut at The Bitter End. She holds the Madeline Elsemiller Scholarship and the Henrietta Quade Scholarship.

Soprano Joan Hofmeyr, from Johannesburg, South Africa, is a fourth-year undergraduate in the bachelor of music program at Juilliard, under Marlena Malas' tutelage. Her opera chorus experience includes Bellini’s La sonnambula, conducted by Juilliard alumna Speranza Scappucci, and Leoš Janáček's Katya Kabanova, directed by Juilliard faculty member Stephen Wadsworth. She appeared as a housemaid in Mozart's La finta giardiniera, Juilliard's 2017 fall opera directed by Mary Birnbaum. She recently originated a role in an opera scene performed at BAM and, in Paris this summer, she performed Poulenc's La Court Paille at Schola Cantorum. This season she will cover the role of Belinda in Purcell's Dido and Aeneas, which will be performed at Juilliard and on tour in Europe in June 2019. She holds the Cecille Weber Memorial Scholarship; the Alice Tully Scholarship; and the Hans J. Heinz and Tatiana Troyanos Memorial Scholarship.

Tenor Chance Jonas-O’Toole is a first-year master’s student at Juilliard, studying with Sanford Sylvan. Originally from Dallas, he has lived in New York the past four years completing his bachelor’s degree at Juilliard. Last season, he performed multiple roles with Juilliard, including Nebuchadnezzar in Britten’s The Burning Fiery Furnace conducted by Mark Shapiro and Mercure in Rameau’s Hippolyte et Aricie, conducted by Stephen Stubbs. He has completed two consecutive fellowships at the Tanglewood Music Center. He holds the Mildred H. Kellogg Scholarship; the Arthur B. Barber Scholarship; and the Anna Case Mackay Scholarship.

Soprano Anneliese Klenetsky is a second-year master’s student at Juilliard under the tutelage of Sanford Sylvan. She was most recently seen as the soloist in the New York premiere of A Sibyl by James Primosch at MoMA, led by Joel Sachs. She collaborated with Juilliard415 and Vox Luminis, performing Handel’s Laudate pueri Dominum, HWV 237. Recent opera repertoire includes The Governess in Britten's The Turn of the Screw, Amaranta in Haydn’s La fedeltà premiata, and La bergère/Un Pâtre in Ravel's L’enfant et les sortilèges. She has sung numerous world premieres, including Jonathan Dawe’s Oroborium with New Juilliard Ensemble, Theo Chandler's Songs for Brooches with the Juilliard Orchestra at Alice Tully Hall, and Jake Landau’s Les danseuses de Pigalle at New York Live Arts. She holds the Allen and Judy Brick Freedman Scholarship and the Risë Stevens Scholarship.

Soprano Rebecca Pedersen has performed as a soloist with the Metropolitan Opera Orchestra, New York City Symphony, Chicago Symphony, and Utah Symphony. She has also won various competitions, including the Metropolitan Opera National Council Auditions, first prize at the Licia Albanese Puccini Competition, the Utah Symphony Salute to Youth Competition, third prize at the Gerda Lissner Competition, and a grant from the George London Competition. She made her profession opera debut in Utah Opera’s 2016 production of Aida and is currently completing a master’s degree at Juilliard under the tutelage of Robert C. White Jr. She holds the David Clayson Scholarship in Voice; the Jennie Tourel Scholarship; and the Mildred and Harry Zucker Scholarship.

Tenor Charles Sy, hailing from Toronto, is an Artist Diploma in Opera Studies student at Juilliard, where he studies with Marlena Malas. He is a recent graduate of the Canadian Opera Company Ensemble Studio and completed his BM and MM at the University of Toronto. He is an alumnus of several prestigious training programs including Music Academy of the West, Opera Theatre of Saint Louis, the Merola Opera Program, and the Britten-Pears Young Artist Program. This season, he will be making his Vancouver Opera debut as Ramiro in Rossini’s La Cenerentola. He received first prize in the 2018 Oratorio Society of New York’s Solo Competition and both First Prize and Audience Choice in the Canadian Opera Company’s 2014 Centre Stage Competition. He holds the R. Maurice Boyd Scholarship for Vocal Studies; the Philo Higley Scholarship; and the Hardesty and Beverley Peck Johnson Fund.

Recent design for opera at Juilliard includes Die lustigen Weiber von Windsor, The Burning Fiery Furnace, La fedeltà premiata, The Children’s Hour, Anatomy of Sound, A Midsummer Night’s Dream, Armide, La sonnambula, L’incoronazione di Poppea, and the Juilliard gala performance of A Midsummer Night’s Dream directed by John Giampietro. Other opera work includes Aida and Les contes d'Hoffmann (Aspen Music Festival), Nina, o sia la pazza per amore (U.S. Premiere), Land of Smiles, and The Conspirators (Manhattan School of Music). She has also designed lighting for Tango Song and Dance (Kennedy Center), Romeo and Juliet (Baltimore Symphony Orchestra), Josephine and I (Public Theater), and Death of a Salesman (BAM). She is resident dance lighting designer at Williams College, and she holds a BA from the College of William and Mary, an MFA from New York University’s Tisch School of the Arts, and is a proud member of United Scenic Artists.

The Turn of the Screw

Libretto: Myfanwy Piper, after the novella by Henry James

The Cast (in order of vocal appearance):

Tickets for Juilliard Opera productions are $30 ($15 for full-time students with a valid ID) and available at juilliard.edu/calendar.

About the Ellen and James S. Marcus Institute for Vocal Arts at Juilliard

One of America’s most prestigious programs for educating singers, Juilliard’s Ellen and James S. Marcus Institute for Vocal Arts offers young artists programs tailored to their talents and needs. From bachelor and master of music degrees to an advanced Artist Diploma in Opera Studies program, Juilliard provides frequent performance opportunities, featuring singers in its own recital halls, on Lincoln Center’s stages, and around New York City. Juilliard Opera has presented numerous premieres of new operas as well as works from the standard repertoire.

Recognized as one of today’s leading collaborative pianists, Brian Zeger has performed with many of the world’s greatest singers in an extensive concert career that has taken him to the premiere concert halls throughout the United States and abroad. Recent recordings include Preludios – Spanish songs with Isabel Leonard, a recording of Strauss and Wagner lieder with Adrianne Pieczonka, Dear Theo: 3 Song Cycles by Ben Moore (Delos) with Paul Appleby, Susanna Phillips, and Brett Polegato, and All Who Wander, a recital disc with mezzo-soprano Jamie Barton. For more information about Mr. Zeger’s activities, please visit his website, www.brianzeger.com. 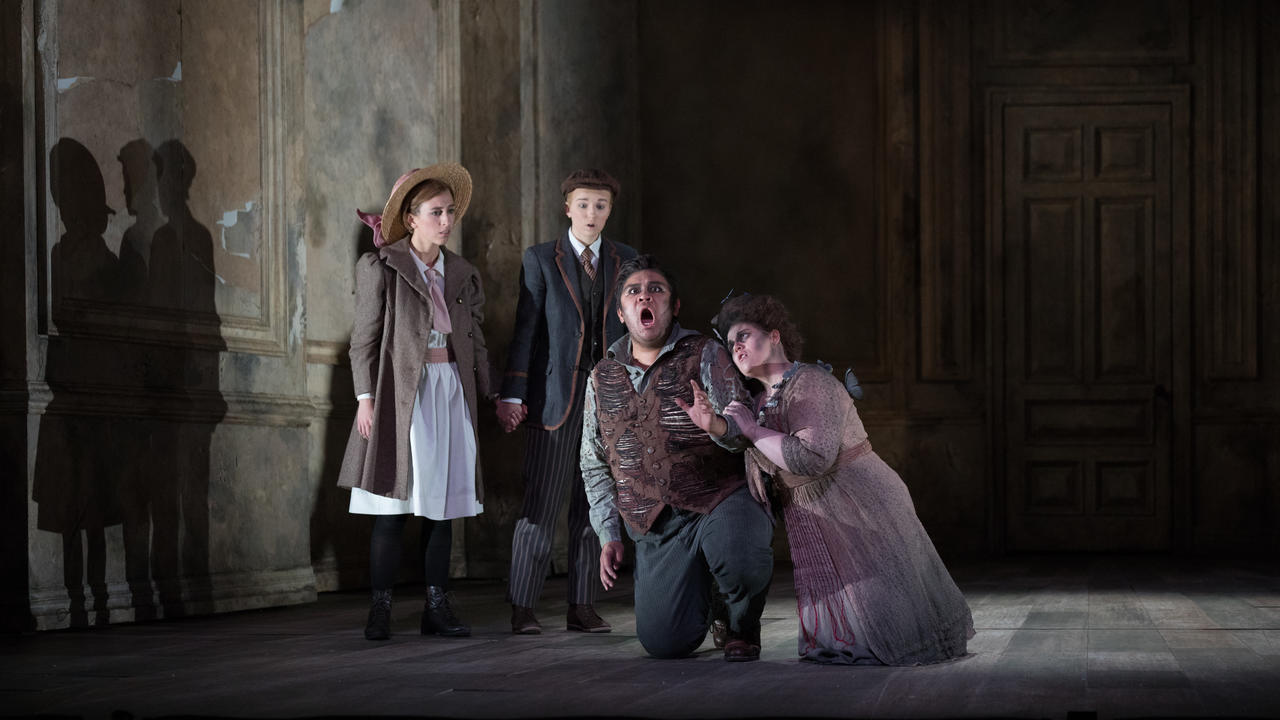 Juilliard Opera Presents Benjamin Britten's "The Turn of the Screw," Conducted by Steven Osgood and Directed by John Giampietro, in November 2018 (photo by Rosalie O'Connor)