Focus 2019 Presents On the Air! A Salute to 75 Years of International Radio Commissioning, January 25 Through February 1, 2019

Focus Closes on Friday, February 1, 2019, at 7:30pm in Alice Tully Hall With the Juilliard Orchestra, Conducted by Gil Rose, in Works by Olivero, Ligeti, and Tippett

The Juilliard Orchestra, led by Gil Rose, performs the closing-night concert on Friday, February 1, 2019, at 7:30pm in Alice Tully Hall. The program features Lontano (1967) by György Ligeti (Hungary/Germany); Tenuót (1990) by Betty Olivero (Israel); and Symphony No. 2 (1956-7) by Michael Tippett (U.K.). [Please note: Anne Manson, who was originally scheduled to conduct this concert had to withdraw due to minor shoulder surgery that couldn’t be rescheduled. We are delighted to welcome Gil Rose.]

All Focus festival events are free; tickets are available at juilliard.edu/calendar.

(The complete program for the festival follows at the end of this press release.)

About this season’s festival, Joel Sachs writes: “I unexpectedly realized the role of radio in October 2017, while writing a program note about Argentinean-German composer Mauricio Kagel for a New Juilliard Ensemble concert. Because Kagel settled in Cologne, I began thinking about the extraordinary post- World War II new music scene that flourished there, where he and many other compositional giants, German and foreign, had settled. Being reasonably acquainted with that Rhineland city and its institutions, I immediately recalled the German letters WDR (Westdeutscher Rundfunk, West German Broadcasting), the radio-TV public broadcast based there. An enormous operation, WDR generally considered the most important broadcaster in German, with five radio transmissions, television, internet broadcasts, and a group of external studios in various cities around Germany’s industrial heartland. Having had a professional relationship with WDR 3, I realized that it has had a vital role as one of the most prominent of European radio stations with its decades-old commissioning program. Dots began to connect. I had performed or recorded at the BBC, Radio France, Swiss stations in Zurich and Basel, Austrian radio in Salzburg, but what had never struck me was that they all were busily commissioning composers, not just creating background music for radio dramas, but also music intended for live performance in concerts, and not just those composers who produced ‘comfortable’ music. Suddenly I had a topic for Focus 2019: ‘On the Air! A Salute to 75 Years of International Radio Commissions.’”

Joel Sachs, founder and director of the New Juilliard Ensemble, performs a vast range of traditional and contemporary music as conductor and pianist. As co-director of the internationally acclaimed new music ensemble Continuum, he has appeared in hundreds of performances in New York, nationally, and throughout Europe, Asia, and Latin America. He has also conducted orchestras and ensembles in Austria, Brazil, Canada, China, El Salvador, Germany, Iceland, Mexico, Switzerland, and Ukraine, and has held new music residencies in Berlin, Shanghai, London, Salzburg, Curitiba (Brazil), Newcastle-Upon-Tyne (U.K.), Helsinki, and the Banff Centre (Canadian Rockies). One of the most active presenters of new music in New York, Sachs founded the New Juilliard Ensemble in 1993. He produces and directs Juilliard’s annual Focus! festival, and has been artistic director of Juilliard’s concerts at New York’s Museum of Modern Art (MoMA) since 1993. A member of Juilliard's music history faculty, Sachs wrote the first full biography of the American composer Henry Cowell, which was published by Oxford University Press in 2012. Sachs often appears on radio as a commentator on recent music and has been a regular delegate to numerous international music conferences. A graduate of Harvard, Sachs received his PhD from Columbia University. In 2011, he was made an honorary member of Phi Beta Kappa at Harvard for his work in support of new music, and he received the National Gloria Artis Medal of the Polish Government for his service to Polish music. In 2002, he was given Columbia University’s Alice M. Ditson Award for his service to American music.

The New Juilliard Ensemble, led by founding director Joel Sachs and now in its 26th season, presents music by a variety of international composers who write in the most diverse styles. The ensemble appears regularly at MoMA’s Summergarden and has been a featured ensemble four times at the Lincoln Center Festival. It has given world premieres of some 100 compositions and U.S. premieres of many others. Concerts in the 2017-18 season included music by John Woolrich, Gerald Barry, Raminta Šerkšnytė, Akira Nishimura, Mauricio Kagel, Giya Kancheli, Shuci Wang, Liu Sola, Sunbin Kim, Kolbeinn Bjarnason, Alejandro Cardona, and Jonathan Dawe. In 2014, the New Juilliard Ensemble collaborated with Carnegie Hall on UBUNTU: Music and Arts of South Africa. A highlight of the 2013-14 season was a collaboration with the Royal Philharmonic Society’s Bicentennial Celebration with the U.S. premieres of works by Magnus Lindberg and Judith Weir. In 2012, NJE collaborated with Carnegie Hall on Voices From Latin America; in 2011, with Carnegie Hall’s Japan/NYC festival; and in 2009, with Carnegie Hall’s Ancient Paths, Modern Voices festival. The New Juilliard Ensemble performs in Juilliard’s Focus festival; recent Focus festivals have included: China Today: A Festival of Chinese Composition (2018); Our Southern Neighbors: The Music of Latin America (2017); Milton Babbitt’s World: A Centennial Celebration (2016); and Nippon Gendai Ongaku: Japanese Music Since 1945 (2015). It will open the 2019 Focus festival, On the Air!, a celebration of the decades-long commissioning projects of European and Canadian broadcasters.

Gil Rose is a conductor helping to shape the future of classical music. His dynamic performances and many recordings have garnered international critical praise. In 1996, Rose founded the Boston Modern Orchestra Project (BMOP) and under his leadership it has earned 15 ASCAP awards for adventurous programming, the John S. Edwards Award for Strongest Commitment to New American Music, and it was named Musical America’s 2016 Ensemble of the Year. Rose is also the founder of Odyssey Opera and was the first artistic director of Opera Boston. Rose guest conducts on both opera and symphonic platforms, including the American Composers Orchestra, Warsaw Philharmonic, National Symphony Orchestra of the Ukraine, Cleveland Chamber Symphony, Orchestra della Svizzera Italiana, and the National Orchestra of Porto. Rose is the recipient of an ASCAP Concert Music Award for his exemplary commitment to new American music and is a four-time Grammy nominee.

On the Air! A Salute to 75 Years of International Radio Commissioning

Colin MATTHEWS (U.K.): A Voice to Wake (2005, first performance outside the U.K.), commissioned by the BBC

All the pieces in the first half were commissioned by ARD, the Consortium of Public Broadcasters in the Federal Republic of Germany, for the Munich International Competition, a project of Bavarian Radio.

Free Pre-concert conversation about music and radio broadcasting, with John Schaefer and Joel Sachs at 6:30pm

All of the above works were commissioned by ARD, the Consortium of German Public Broadcasters, for the Munich International Competition, a project of Bavarian Radio.

Commissioned by ARD, the Consortium of Public Broadcasters in the Federal Republic of Germany, for the Munich International Competition, a project of Bavarian Radio.

Esa-Pekka SALONEN (Finland): knock, breathe, shine (2010), commisioned by ARD, the Consortium of Public Broadcasters in the Federal Republic of Germany, for the Munich International Competition, a project of Bavarian Radio

[Please note: Anne Manson, who was originally scheduled to conduct this concert had to withdraw due to minor shoulder surgery that couldn’t be rescheduled. We are delighted to welcome Gil Rose.]

All events are free; tickets are available at juilliard.edu/calendar. 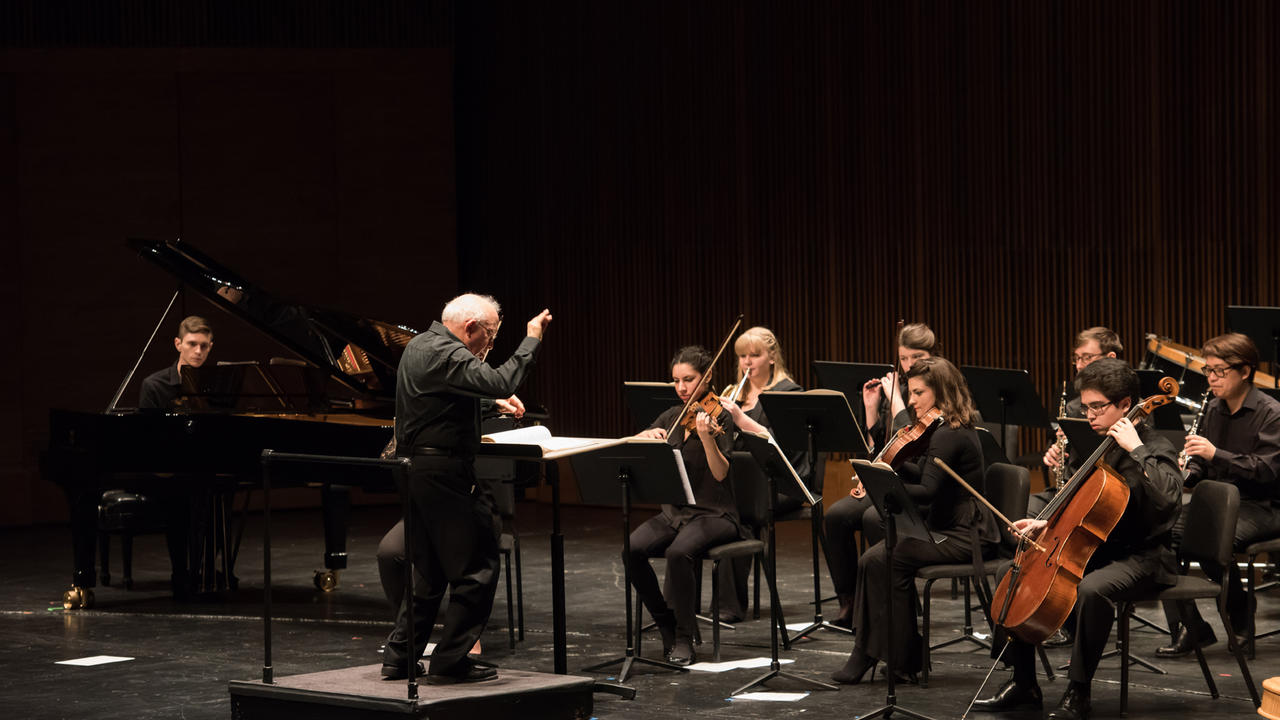 Focus 2019 Presents On the Air! A Salute to 75 Years of International Radio Commissioning, January 25 Through February 1, 2019 (photo by Nan Melville)