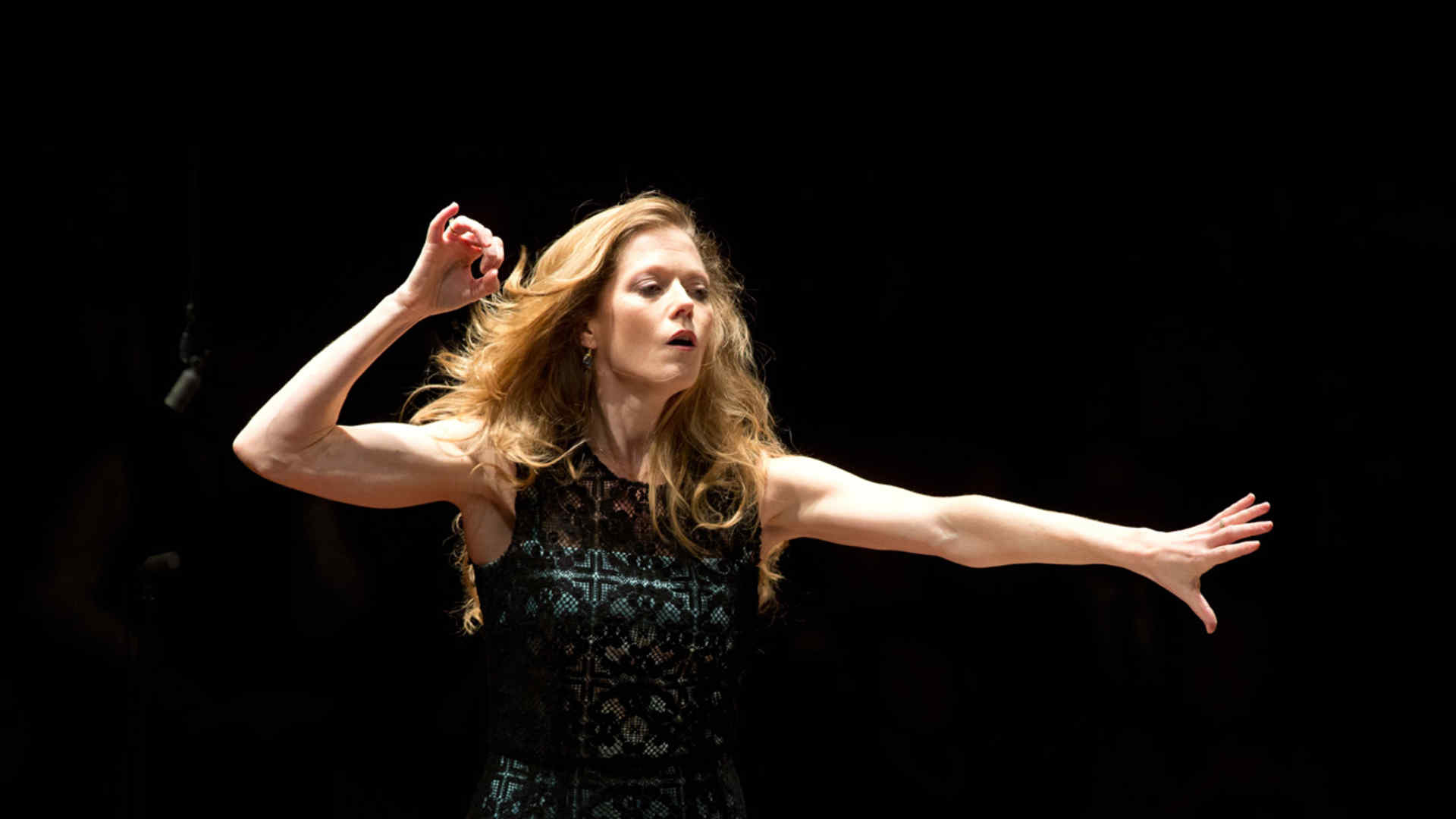 Even as an internationally acclaimed soprano, Barbara Hannigan is unable to resist challenging herself to ever more-formidable accomplishments. In 2011 she made a bold leap to the podium, debuting as a conductor at the Châtelet in Paris with Stravinsky’s Renard.

Hannigan, now 47, has continued developing her career along these parallel paths ever since—at times even combining both roles in the same performance, as in her signature interpretation of Mysteries of the Macabre (arias from György Ligeti’s “anti-opera” Le Grand Macabre). Her first recording as both singer and conductor (Crazy Girl Crazy) won last year’s Grammy for best classical solo vocal album and received a JUNO award in her native Canada. On February 8 Hannigan will make her New York conducting debut leading the Juilliard Orchestra at Alice Tully Hall. 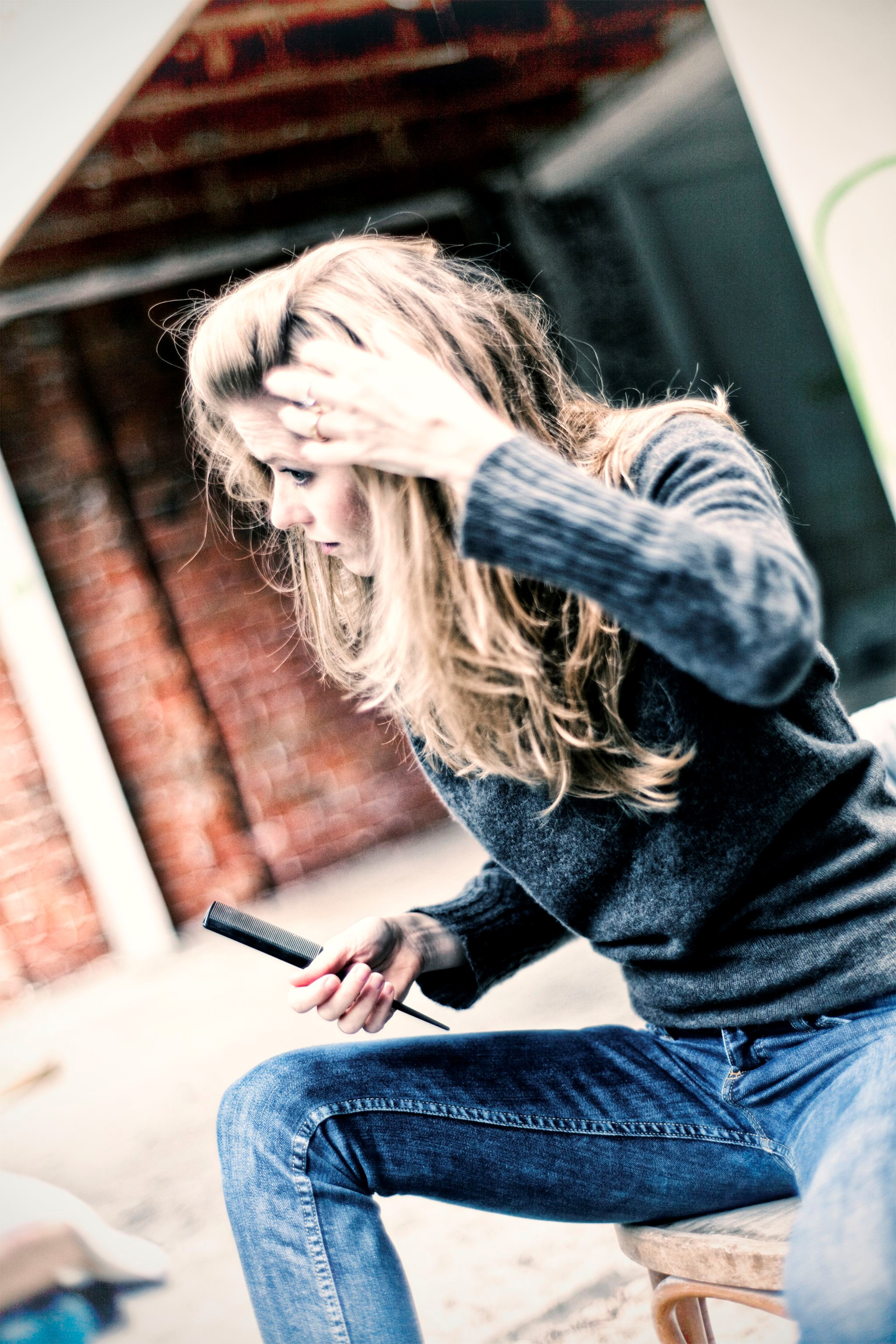 “It was not at all planned as a career move,” the artist recalled in a recent Journal interview, referring to the decision to take on conducting. “It was simply one performance: a risk, shall we say. I did not have any grand plans. I just was trying something new, once. But it meant something to me, as a musician, and there were, almost immediately, opportunities for me to explore conducting further.”

Hannigan is modestly alluding to an extraordinary tally of conducting successes with the likes of the Berlin Philharmonic and other high-profile ensembles. In December she made her debut as an opera conductor (again with Stravinsky, in this case, The Rake’s Progress) in a semistaged production with Sweden’s Gothenburg Symphony, where she begins next season as principal guest conductor. Hannigan’s Juilliard engagement comes just a week after her U.S. conducting debut with the Cleveland Orchestra in Miami.

All of this is alongside a full-time singing career in which the soprano has made herself an indispensable interpreter of contemporary music and modernist classics. Hannigan created leading roles in both of George Benjamin’s highly praised operas and last summer premiered John Zorn’s Jumalattaret for soprano and piano in Lisbon—one of her personal highlights, which she will bring to New York during a residency in October at the Park Avenue Armory.

“Nowadays, about half my season is conducting, and the other half is singing,” Hannigan says. “I am fortunate that I can be very particular about what I am choosing to program, and with whom. I work with directors and conductors I like, with composers who inspire me, and with companies and orchestras with whom I have an affinity. This is a luxury position, I know, and it has been a long road to get there.”

A long and unorthodox road that began in Waverley, the village in Nova Scotia where Hannigan was raised. For years, she restricted herself to singing an unusual repertoire (“even if it meant the audience was small”). Hannigan did not work with a proper agent until the age of 40. “I learned a lot, and I was able to develop myself, and to find mentors along the way who helped and inspired me enormously.”

Hannigan points to “an extreme aspect” to this lineup, with the concert’s second half being “full of otherworldliness: the mythology of Syrinx morphing into the Finnish mythology of how the world was created (through a combination of loneliness and generosity I might add!) in the Sibelius, and then a magical whirlwind of awkward seduction and eventual delirious abandon in the Mandarin Suite.” Counterbalancing this, the first half “starts with driving obsession in Salome’s Dance and finds love in the Haydn. And let’s face it, Haydn has a very modern feel about him. His combination of wit and tenderness never dulls,” she says.

Hannigan did not work with a proper agent until the age of 40. “I learned a lot, and I was able to develop myself, and to find mentors along the way who helped and inspired me enormously.”

Such imaginative dramaturgy suggests the aesthetic outlook that initially attracted Hannigan to singing. She adds that this outlook has influenced her “interest in inhabiting text, not least through the prism of the composer’s voice. Whether purely instrumental or vocal, I find myself approaching all music through its emotional character. Sometimes conflicting, sometimes downright contradictory, as all humans are, and always with some underlying dramatic impetus at its core.”

Sibelius’ Luonnotar, for example, incorporates a rich web of personal and artistic associations for Hannigan. “I first heard it about 15 years ago and couldn’t believe the magical mystery tour this music took me on. I learned it myself a few years later. It seemed like a piece that would lend itself well to singing and conducting, and indeed, I feel that way of performing it has a deep meaning, as the piece is about creation, and somehow, almost feels like an improvisation when we’re in the flow of it. It’s like a cross between an old Finnish folk song and the long flow of a Wagner drama. All in under 10 minutes! So I’ve now brought it to a few different orchestras as a sing/conduct piece.”

But in the Juilliard concert, the solo part will be entrusted to soprano Meghan Kasanders, an Artist Diploma candidate. Since Hannigan will be singing and conducting it in the Cleveland Orchestra performance as well as the week after, with the Toronto Symphony, she decided to be “a bit pragmatic vocally” and give her voice a rest. Even more, Hannigan says, she is “eager to work on the piece with Meghan—whom I enjoyed very much meeting and working with last year—and to approach it in a different way, as ‘just’ conductor.”

Spontaneity is a crucial value for Hannigan: “I prefer to prepare and work ‘in the moment’ with my colleagues.” Yet a laissez-faire attitude is not what she means. “I like to work at our highest level possible—preparation is key for all, so that we can be free. I remember during one of the wonderful moments of working with Pierre Boulez, he said we cannot be spontaneous or find the character of the music without employing the discipline that can lead to that kind of artistic freedom. I took that very deeply into my heart.”

How does Hannigan manage the balancing act of her dual careers? “I am in a constant state of balancing and rebalancing. I have almost boundless energy when I am able to stay true to myself,” she says. In fact Equilibrium is the name Hannigan chose for the professional mentoring initiative she launched in 2017, which she describes as “a gathering place for a select group of young artists.” Equilibrium’s inaugural season started with the Gothenburg Symphony’s Rake’s Progress, which is slated to travel to the Ojai Festival when Hannigan takes on the role of music director there this summer. At this early stage in their careers, according to Hannigan, “young artists are trying to find a balance in repertoire and a financial base to develop their own work ethic, discipline, and interpersonal skills, all the while trying to keep their passion for music alive and kicking.”

Hannigan’s own passion remains as reliable as ever, informing every aspect of her musical life. “Like most musicians,” she says, “I started making music as a child. I felt joy and curiosity. I still feel those things.”