Tickets at $30 ($15 for full-time non-Juilliard students) are available at juilliard.edu/calendar.

Martha Graham (Juilliard faculty 1951-77) was in her 90th year when she choreographed a new production of The Rite of Spring, set to Igor Stravinsky’s music, which will be performed live by the Juilliard Orchestra, conducted by Jeffrey Milarsky, on these performances. Her work had its premiere in 1984 at Lincoln Center’s New York State Theater. Juilliard faculty member Terese Capucilli premiered the central role of the work, “The Chosen One” and will be passing on the legacy as she stages the work. Assisting her will be former Graham dancers Christine Dakin (who alternated the role of The Chosen One with Capucilli in the original productions), Abdiel Jacobsen, Blakeley White-McGuire, and current Graham member Ari Mayzick. Juilliard is the first conservatory to perform the work in its entirety.

Bill T. Jones, a Kennedy Center honoree, MacArthur grant awardee, and Tony Award winner, set his work D-Man in the Waters (Part 1) to Mendelssohn’s Octet in E-flat Major for Strings, Op. 20, which will be performed live by Juilliard musicians in these performances. The work, which will be staged by alumnus Antonio Brown and I-Ling Liu, was commissioned in 1989 by St. Luke’s Chamber Orchestra. “D-Man” refers to Bill T. Jones’ nickname for dancer Demian Acquavella, who trained with Marjorie Mussman, Cindi Green, and Phil Black, and also danced with the Elisa Monte Dance Company and Alvin Ailey American Dance Center, among others, before he joined the Bill T. Jones/Arnie Zane Company in 1985. In the fall of 1987, he found out he was HIV-positive. The work is a celebration of Acquavella’s determination to fight his illness.

Alejandro Cerrudo was born in Madrid, Spain and trained at the Real Conservatorio Profesional de Danza de Madrid. His professional career began in 1998 and includes work with Victor Ullate Ballet, Stuttgart Ballet and Nederlands Dans Theater 2. Cerrudo joined Hubbard Street Dance Chicago in 2005 and assumed the position of resident choreographer of the company from 2008 to 2018. Cerrudo's body of work has been performed by over 20 professional dance companies around the world. In March 2012, Pacific Northwest Ballet invited Cerrudo to choreograph his first work for the company, Memory Glow, upon receiving the Joyce Theater Foundation’s second Rudolf Nureyev Prize for New Dance. Additional honors include an award from the Boomerang Fund for Artists (2011), and a Prince Prize for Commissioning Original Work from the Prince Charitable Trusts (2012) for his acclaimed, first evening-length work, One Thousand Pieces. Cerrudo was one of four choreographers invited by New York City Ballet principal Wendy Whelan to create and perform original duets for “Restless Creature,” and he was the 2014 USA Donnelley Fellow by United States Artists. Cerrudo’s Sleeping Beauty, created with Ballet Theater Basel in 2016, was nominated as “Production of the Year” in Switzerland in the “Tanz, Jahrbuch 2016” by the Neue Zürcher Zeitung.

Martha Graham (1894-1991) is recognized as a primal artistic force of the 20th century. She created 181 ballets and a technique that revolutionized dance throughout the greater part of the past century. Using the founding principles of contraction and release, she built a vocabulary of movement to “increase the emotional activity of the dancer’s body,” exploring the American frontier to Greek mythology. Among the roles she created based on prominent historical and mythological women, are Clytemnestra, Jocasta, Medea, Phaedra, Joan of Arc, and Emily Dickinson. During Graham’s 70 years of creating dance, she collaborated with other great artists including Noguchi, Copland, Barber, and former Juilliard president William Schuman, and her mentor Louis Horst (Juilliard faculty 1951-64), among others, and is recognized for her groundbreaking work in all aspects of the theater including use of time, space, lighting, costumes, sets, and music. Her company was a training ground for many generations of choreographers including Cunningham, Taylor, and Tharp. At the Neighborhood Playhouse, she is said to have changed the course of American acting through students such as Bette Davis, Gregory Peck, Tony Randall, and Orson Wells. Her creative genius earned her numerous honors and awards, including the Medal of Freedom and the National Medal of the Arts. Graham’s extraordinary legacy lives on in the work of the Martha Graham Dance Company, Ensemble, and School, and in the students worldwide studying her technique and performing her masterworks.

Bill T. Jones, artistic director, co-founder, and choreographer of Bill T. Jones/Arnie Zane Company and artistic director of New York Live Arts, was the recipient of the 2016 Washington University International Humanities Prize; the 2014 Doris Duke Artist Award; the 2013 National Medal of Arts; the 2010 Kennedy Center Honors; a 2010 Tony Award for best choreography (for FELA!); an Obie and a Tony for his choreography for Spring Awakening; the 2010 Jacob’s Pillow Dance Award; the 2007 USA Eileen Harris Norton Fellowship; the 2006 Lucille Lortel Award for outstanding choreography for The Seven; the 2005 Wexner Prize; the 2005 Samuel H. Scripps American Dance Festival Award for lifetime Achievement; the 2005 Harlem Renaissance Award; the 2003 Dorothy and Lillian Gish Prize; and a 1994 MacArthur “Genius” Award. In 2010, Jones was recognized as Officier de l’Ordre des Arts et des Lettres by the French government, and in 2000, the Dance Heritage Coalition named Jones “an irreplaceable dance treasure.” Jones choreographed and performed worldwide with his late partner, Arnie Zane, before forming the Bill T. Jones/Arnie Zane Company in 1982, and he has created more than 140 works for the company. He is artistic director of New York Live Arts, an incubator for movement-based artists at every level of their careers.

Alicia Graf Mack enjoyed a distinguished career as a leading dancer of Alvin Ailey American Dance Theater. She has also been a principal dancer with Dance Theatre of Harlem and Complexions Contemporary Ballet. Graf Mack has danced as a guest performer with Alonzo King’s LINES Ballet, Beyoncé, John Legend, Andre 3000, and Alicia Keys. Graf Mack graduated magna cum laude with honors in history from Columbia University and holds an MA in nonprofit management from Washington University in St. Louis. In 2007, Smithsonian magazine named her an American Innovator of the Arts and Sciences. She is a recipient of the Columbia University Medal of Excellence, an award given each year to one alumnus who has demonstrated excellence in their field. In 2008, she delivered the keynote address to the graduates of Columbia University’s School of General Studies. As a dance educator, Graf Mack most recently taught as an adjunct faculty member at the University of Houston and was a visiting assistant professor at Webster University. She is a co-founder of D(n)A Arts Collective, an initiative created to enrich the lives of young dancers through master classes and intensives. She began her inaugural season as director of the Juilliard Dance Division in fall 2018.

Now under the direction of Alicia Graf Mack, Juilliard’s Dance Division aims to create true contemporary dancers—trained equally in classical ballet and modern dance. Established in 1951 by William Schuman during his tenure as president of Juilliard, with the guidance of founding division director Martha Hill, Juilliard became the first major teaching institution to combine equal instruction in both contemporary and ballet techniques.

The Juilliard Dance Division is the proud recipient of the 2015 Capezio Award, and is the first educational institution to receive the honor. (juilliard.edu/dance)

The Rite of Spring by Martha Graham

Tickets for Juilliard Spring Dances are $30 ($15 for full-time students with a valid ID) and available at juilliard.edu/calendar.

Senior Dance Production is the culmination of a yearlong creative and educational process focused on launching seniors into the professional world. Juilliard dancers work in close collaboration with lighting design teams, costume designers, and composers as they create original works.

Free tickets only to members at the Accolade level and above.

Choreographic Honors is sampling of works curated from workshops and performances by Juilliard Dance Division students throughout the year.

Limited tickets at $10 ($5 for students with a valid ID) are available at juilliard.edu/calendar.

In the Senior Dance Showcase, the graduating class presents a diverse program of solos and duets from the repertory and created by alumni and commissioned choreographers.

Limited tickets at $10 ($5 for students with a valid ID) are available at juilliard.edu/calendar. 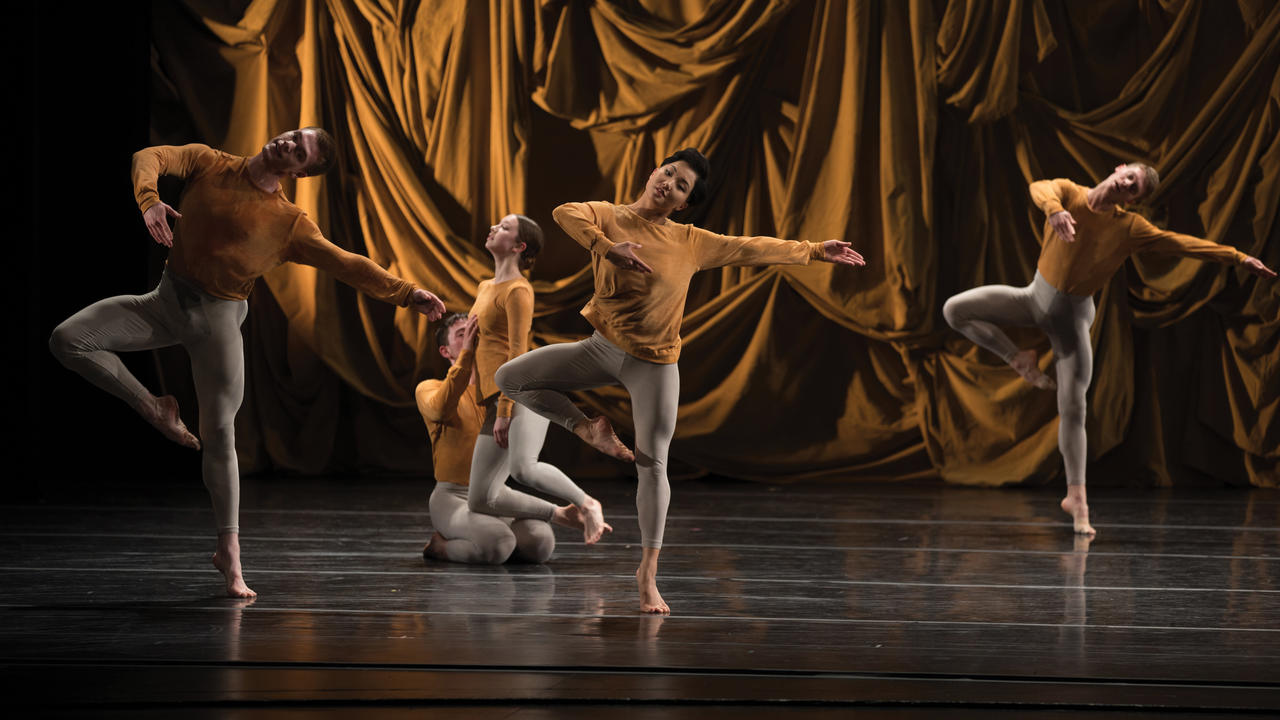