NEW YORK –– Juilliard organists, under the direction of Organ Department Chair Paul Jacobs, give a free recital featuring American and British music at Marble Collegiate Church, located at Fifth Avenue and 29th Street, on Thursday, April 4, 2019, at 7:30pm. The concert is part of the Marble Music Next Door series, co-sponsored by Juilliard, Marble, and the NYC chapter of the American Guild of Organists. Juilliard organists Elena Baquerizo, Daniel Ficarri, Jeremiah Mead, Alan Montgomery, Alexander Pattavina, Raphael Attila Vogl, Phoon Yu, and Eddie Zheng will be performing works on the church’s new pipe organ, which was designed and voiced by Sebastian M. Glück.

Admission is free; no tickets are required.

About the program of American and British organ music, organ alumnus David Crean writes: “By the 20th century, England and America each had a robust, but quite distinct, organ culture, with technically advanced instruments and supremely skilled performers. This concert explores repertoire from these traditions. Despite the geographical and chronological proximity, the stylistic range of these pieces is vast: from the Victorian pageantry of Elgar and Stanford to the quintessentially American voice of Aaron Copland to the always-radical experiments of John Cage.”

A recent winner of the M. Louise Miller-Paul E. Knox Scholarship, Elena Baquerizo studies organ with Paul Jacobs at Juilliard, where she is pursuing a BM. She has been a prizewinner in the Albert Schweitzer Organ Festival, the ECU Young Artists Competition, and the Rodgers North American Classical Organ Competition. Her service playing has taken her to Seminario Nuestra Señora Corredentora (La Reja, Argentina) and Iglesia del Corazón Inmaculado y Doloroso de María (Santiago, Chile), and Assumption Chapel in St. Marys, Kans.; she is organist at Our Lady of Peace Church in Brooklyn. Also passionate about the piano, Baquerizo has been a piano soloist with the Alhambra Orchestra (Coconut Grove, Fla.) and collaborative pianist with tenor Andrew Childs (McCabe Theater, Saint Marys, KS). She received her AA in liberal arts from St. Mary’s College (Saint Marys, Kans.), where she was valedictorian.

Daniel Ficarri (BM ’18) is a graduate organ student of Paul Jacobs at Juilliard. The New York Times listed his performance of John Cage’s Souvenir as one of the “Week’s 8 Best Classical Music Moments” and WQXR has broadcast his live all-Bach performance as part of their Bach Organ Marathon. He has given solo performances at the Cathedral of St. John the Divine, St. Thomas Episcopal Church, and St. Paul’s Chapel of Trinity Church Wall Street, and his compositions have been featured in Choir & Organ magazine and Music From the Tower radio show. Ficarri works as organ scholar at Church of St. Paul the Apostle in NYC, where he founded their organ concert series, Sacred Sounds at St. Paul’s. Previously he served as organ scholar at Hitchcock Presbyterian Church in Scarsdale, N.Y.

Jeremiah Mead, a native of Madison, Conn., is an organist studying with Paul Jacobs at Juilliard. He became interested in the organ at age 12 while he was a chorister at Trinity Episcopal Church in New Haven under the direction of Walden Moore. He has performed in many Connecticut venues, including Trinity Episcopal Church on the Green, New Haven; the Cathedral of Saint Joseph, Hartford; Christ Episcopal Church, Guilford; and Emmanuel Episcopal Church, Killingworth. Mead’s former teachers have included organists Ezequiel Menendez and Andrew Kotylo, and pianists Victoria Reeve and RoseMarie Tamburri.

A native of Vacaville, Calif., Alan Montgomery is a pursuing his MM at Juilliard where he studies with Paul Jacobs. He has spent much of his life in the U.K. He attended high school in Lincoln and holds a BM degree from the Royal College of Music in London, where he studied with David Graham, Sophie-Véronique Cauchefer-Choplin, and Andrew Dewar. While in London he also served as organ scholar of St. Mark’s, Hamilton Terrace, and the Church of the Immaculate Conception, Farm Street. He serves as director of music at the Church of St. Thomas More on East 89th Street.

Alexander Pattavina (BM ’18) is a first-year master’s degree student in the organ studio of Paul Jacobs. A native of Stoughton, Mass., he received first prize in the 2014 L. Cameron Johnson Competition in Storrs, Conn., and was also awarded the 2014 Ruth and Paul Manz Scholarship from the Lutheran Seminary in Chicago. Formerly, he worked as organ scholar of Christ Church in Bronxville, N.Y., under conductor Philip Stopford. His composition for choir and organ, All in a Stable Cold and Bare, was premiered at Christ Church in 2016; it was recently published by Hal Leonard. Pattavina has performed extensively throughout New York City and the Greater Boston area, including concerts at the Cathedral of St. John the Divine and the Church of St. Paul the Apostle (NYC), and Methuen (Mass.) Memorial Music Hall. He is the director of music at the Church of St. Agnes in NYC.

German organist Raphael Attila Vogl is a master’s degree student of Paul Jacobs. He has been taking piano lessons since age 6 and organ lessons since age 11. He studied with organist Ludwig Ruckdeschel in Passau, Germany. He began his studies at the University of Catholic Church Music and Music Education in Regensburg, Germany, studying organ and church music with Stefan Baier and Markus Rupprecht. He has taken part in many competitions, winning second prize at the Jugend musiziert competition in 2015, and in 2014, he was awarded the promotion prize, as the youngest prize-winner of the Kulturkreis Freyung-Grafenau. He also received prizes at the International Mendelssohn Organ Competition in Switzerland, as well as at the International Tariverdiev Organ Competition at the University of Kansas. In addition to his studies in Regensburg, he spent a year at the Franz-Liszt-Academy in Budapest with László Fassang.

Organist and composer Phoon Yu is active in both Singapore and in the U.S. and is pursuing his DMA degree in organ performance at Juilliard under the tutelage of Paul Jacobs. He has given premiere performances of his own music and music by other composers, including works for various solo instruments and chamber groups across various venues in Singapore, China, and the U.S. He received his BM in music composition at the Yong Siew Toh Conservatory under full scholarship, followed by his MM in organ performance at the Peabody Institute of Johns Hopkins University, where he was awarded the Bruce R. Eicher prize at the conclusion of his studies. His previous teachers included Donald Sutherland and Evelyn Lim (organ), and Ho Chee Kong and Oscar Bettison (composition).

Eddie Zheng, a native of NYC, is an undergraduate student at Juilliard, studying with Paul Jacobs. He attended Juilliard Pre-College for two years, studying with Matthew Lewis. In the summer of 2017, he attended the McGill Organ Academy with Hans-Ola Ericsson and the Oregon Bach Festival Organ Institute with Jacobs. He has won several awards, including first place at the 2018 Albert Schweitzer High School Organ Competition and the West Chester University 17th annual International Organ Competition as well as second place at the Brooklyn AGO Scholarship Competition. He has performed at international venues such as the National Centre for Performing Arts in Beijing, Beijing Concert Hall, Beijing Golden Sailing Concert Hall, and many venues in the U.S.

About the Juilliard Organ Department

Marble Music Next Door series, co-sponsored by Juilliard, Marble, and the NYC chapter of the American Guild of Organists

Admission is free; no tickets are required.

Aaron COPLAND: Prelude from Symphony for Organ and Orchestra (trans. Ficarri) and Preamble for a Solemn Occasion (played by Daniel Ficarri) 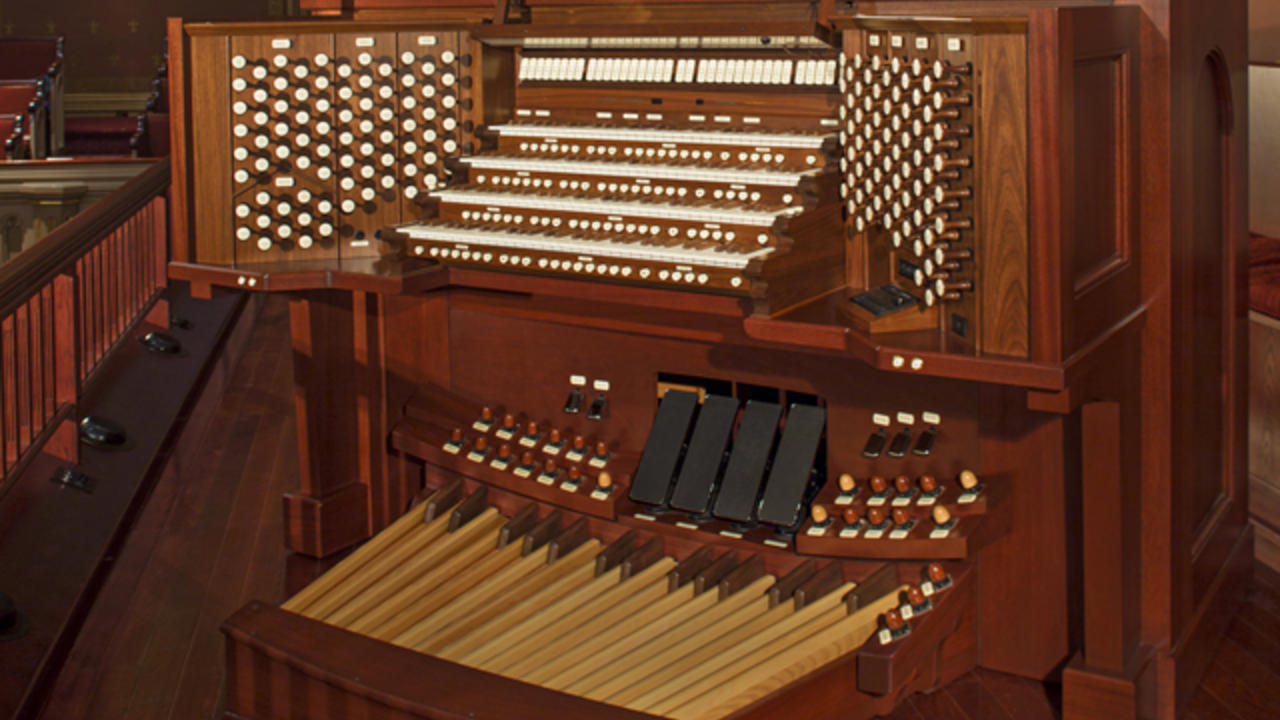