Juilliard Historical Performance Presents "The Seven Last Words Project" on Tuesday, April 16, 2019, at 7:30pm at the Cathedral of St. John the Divine

NEW YORK –– Juilliard Historical Performance presents The Seven Last Words Project, which pairs Haydn with newly commissioned works, on Tuesday, April 16, 2019, at 7:30pm at the Cathedral of St. John the Divine (1047 Amsterdam Avenue at 112th Street, NYC). Juilliard415 has teamed up with seven prominent composers who have each written a companion piece to each of the movements of Haydn’s sacred string quartet The Seven Last Words of Christ. The composers who have been commissioned to write works are Reena Esmail, Colin Jacobsen, Jessica Meyer, Nico Muhly, and Paola Prestini (all Juilliard alumni), Pulitzer Prize-winning composer Caroline Shaw (who is a 2018-19 Juilliard Creative Associate), and Tania León. The premieres take place during Holy Week at the cathedral.

“The new project was the brainchild of one of the second-year students in our Historical Performance program, Keats Dieffenbach,” Juilliard Historical Performance Director Robert Mealy said. “She had the idea of presenting the Seven Last Words as a Juilliard415 program in the wonderfully meditative space of Cathedral of St. John the Divine. Since one of the biggest challenges of this work is that it is a somewhat unrelenting sequence of adagios, Keats had the brilliant thought of providing contrast and a new depth to the event by commissioning a series of contemporary composers to reflect on the issues raised in each of the ‘Words.’”

Juilliard’s full-scholarship Historical Performance program was established and endowed in 2009 by the generous support of Bruce and Suzie Kovner.

Since its founding in 2009, Juilliard415, the school’s principal period-instrument ensemble, has made significant contributions to musical life in New York and beyond, bringing major figures in the field of early music to lead performances of both rare and canonical works of the 17th and 18th centuries. The many distinguished guests who have led Juilliard415 include Harry Bicket, William Christie, Ton Koopman, Nicholas McGegan, Rachel Podger, Jordi Savall, and Masaaki Suzuki. Juilliard415 tours extensively in the U.S. and abroad, having performed on five continents with notable appearances at the Boston Early Music Festival, Leipzig Bachfest, and Utrecht Early Music Festival (where Juilliard was the first-ever conservatory in residence), and on a 10-concert tour of New Zealand. With its frequent musical collaborator, the Yale Institute of Sacred Music, the ensemble has played throughout Italy, Japan, Southeast Asia, the U.K., and India.

Juilliard415, which takes its name from the pitch commonly associated with the performance of Baroque music (A=415), has performed major oratorios and Baroque operas every year since its founding. This season, the ensemble presents Dido and Aeneas at Opera Holland Park in London and the Royal Opera House of Versailles. The ensemble recently made its South American debut with concerts in Bolivia, a tour sponsored by the U.S. Department of State. The 2017-18 season was notable for a side-by-side collaboration with Philharmonia Baroque in San Francisco, as well as return visits by Rachel Podger, William Christie, and Maestro Suzuki, and the rare opportunity to see a fully-staged production of Rameau’s Hippolyte et Aricie. In a concert together with the Bach Collegium Japan, the ensemble played a historic period-instrument performance of Mendelssohn’s Elijah at the Leipzig Gewandhaus in Germany.

In an innovative departure from past seasons, new works for period instruments have been a focus for 2018-19. With the Yale Schola Cantorum, Juilliard415 tours Scandinavia, where it performs a new oratorio by Paweł Łukaszewski, who was commissioned for the occasion by Yale. The ensemble also performed alongside new choreography for Juilliard dancers in an all-Rameau program led by Robert Mealy. This season also welcomes return visits of William Christie, Rachel Podger, Monica Huggett, and Masaaki Suzuki, and the Juilliard debuts of Paul Agnew and Alfredo Bernardini.

Sonata I: Pater, dimitte illis, quia nesciunt, quid faciunt (“Father, forgive them, for they know not what they do”)

Sonata II: Hodie mecum eris in paradiso (“Verily, I say to you, today you will be with me in paradise”)

Sonata IV: Deus meus, Deus meus, utquid dereliquisti me? (“My God, My God, why have you forsaken me?”)

PAOLA PRESTINI It Is Finished

Performance time: approximately 1 hour and 30 minutes, without an intermission 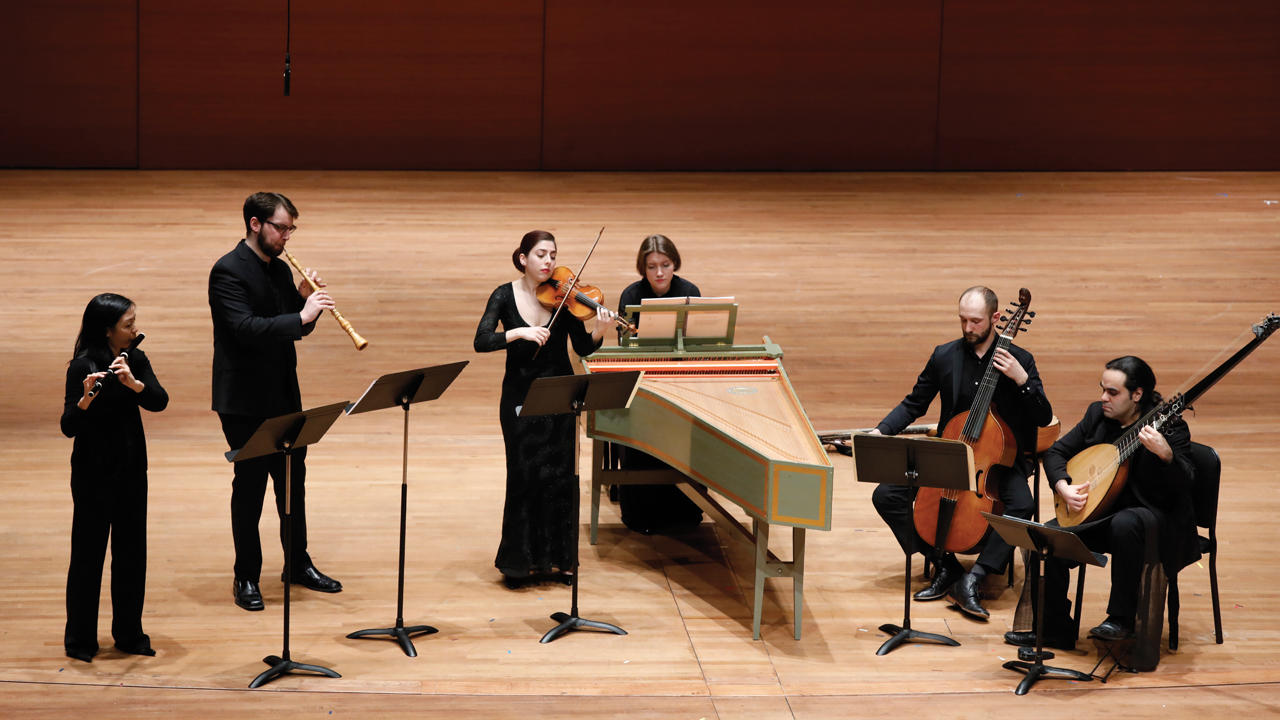 Juilliard Historical Performance Presents "The Seven Last Words Project" on Tuesday, April 16, 2019, at 7:30pm at the Cathedral of St. John the Divine (photo by Michael DiVito)