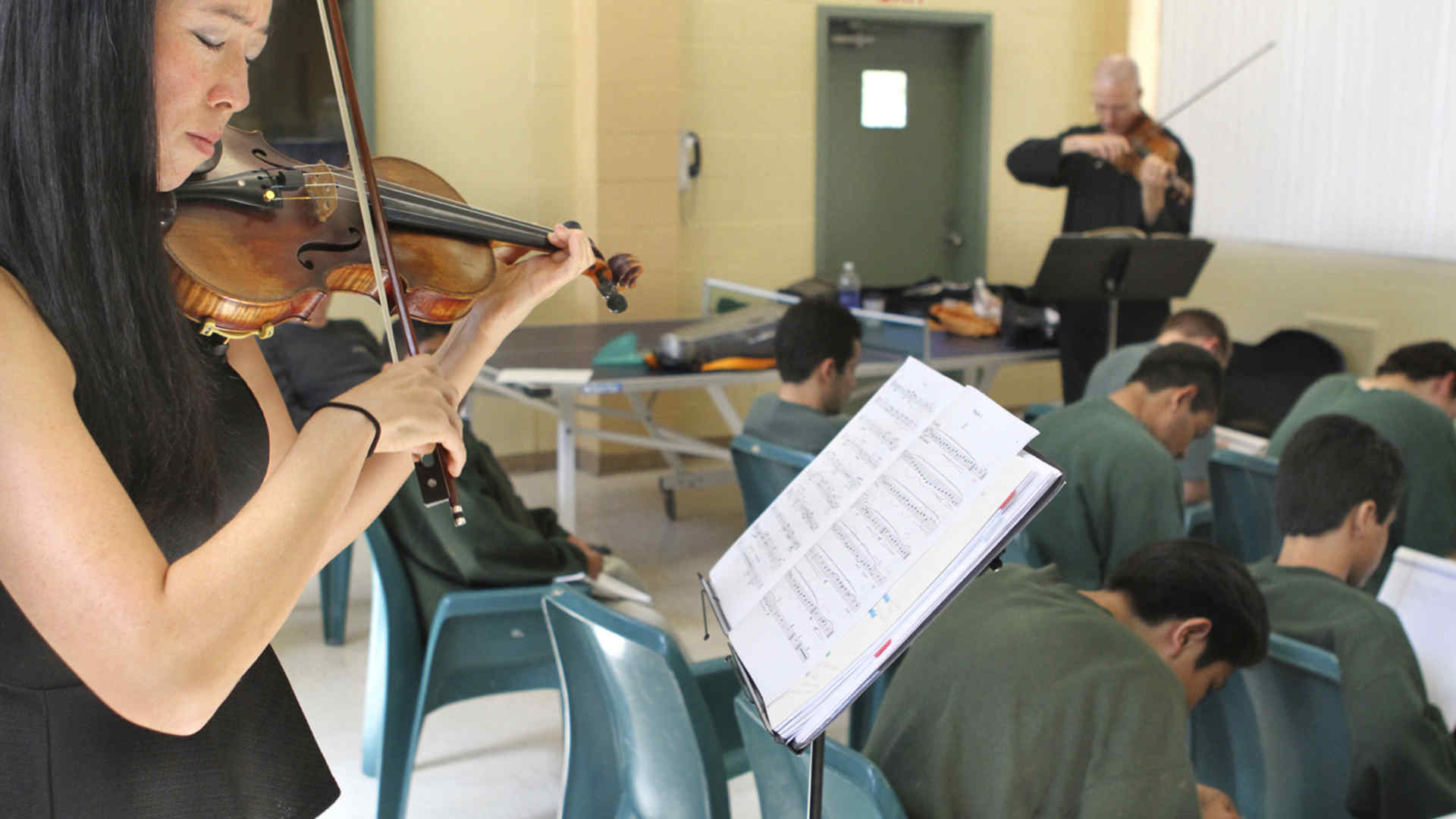 Violinist Rebecca Jackson, director of Music in May, plays for an audience of incarcerated youths at Santa Cruz County Juvenile Hall (photo courtesy of the Santa Cruz Sentinel)

Tapping into what drew me to music as a child continues to steer my career in ways I find immensely gratifying. I love performing with the San Francisco Ballet and Santa Fe Opera orchestras, and I am equally passionate about the projects that I help initiate, regularly bringing chamber music into juvenile halls, centers for the homeless, and public schools. I am the founder and director of Music in May, a chamber music festival celebrating its 12th anniversary, in my hometown, Santa Cruz. I’m also a cofounder of two nonprofit groups, Sound Impact and Ensemble San Francisco. My father and I recently completed the authorized biography of my late mentor, David Arben, who was a Holocaust survivor and former associate concertmaster of the Philadelphia Orchestra. Other recent highlights include performing in a refugee camp in Beirut, performing on the Violins of Hope (instruments from the Holocaust), and receiving recognition for public service from the Jefferson Awards Foundation. Music is my superpower and life is grand living in my favorite city—San Francisco.
Rebecca Jackson (BM ’03, violin)

The inherent professionalism, quality, and major creative swagger among the students as well as incredible artistic and personal expectations inspired me from day one at Juilliard, and I feel enormous pride and gratitude for being a part of this amazing community. Over my four years, I learned what it means to be a successful artist as well as the commitment, drive, and hustle one needs for an exciting and authentic career. While my priority was to perform in orchestras, I was also very involved with the conducting program, under the late great Otto Werner Mueller [who headed Juilliard’s conducting program from 1987 to 2004]. Combining this inspiration, quality and go-get-’em attitude, I was driven to exciting new frontiers in music. After traveling the world performing in orchestras, my best friend Sam Hyken (BM ’03, trumpet) and I created the Nu Deco Ensemble, a Miami-based eclectic, genre-bending 21st-century chamber orchestra that aims to establish new pathways for artists to collaborate, create, and connect to new and more diverse audiences. I could never have accomplished this without the professionalism, transparent attitude, sense of community, and leadership all Juilliard graduates receive.
Jacomo Bairos (BM ’98, tuba)

After graduating, I became a financial advisor at Bernstein Private Wealth Management. Many of my classmates were perplexed by my career pivot, but I found that the firm readily embraced my musical background and gave me quite a bit of flexibility in building my client base. Through the firm, I’ve organized the After Arts Group, a collection of individuals who have made a transition from the performing arts into the corporate world. I’ve been given a budget to rent Carnegie Hall and hold a recital featuring members from the group (the irony of leaving Juilliard to work on Wall Street only to end up in Carnegie Hall does not escape me). It’s been surprising (and inspiring) to learn that most people who endure a rigorous conservatory training excel in fields outside of the performing arts—few things are more difficult than performing Bach fugues. I feel very fortunate to have the ability to incorporate my love for music into a career. To any students reading this, your training at Juilliard primes you for success, and that success is in no way confined to the path that you’re currently on.
Nicholas King (MM ’18, piano)

Since graduating last May, I’ve gotten the opportunity to have a bit of an apprenticeship with Roundabout Theatre Company. I made my Broadway debut there in the fall in a new play, Bernhardt/Hamlet. A couple weeks after that closed, I started rehearsals for a revival of Sondheim’s Merrily We Roll Along in the Off Broadway space, which had an extended run this spring. In February, I also began teaching theater workshops with the student company in the educational department! Having the consistency of working at one theater has really allowed me to have an extended education while being in production; I’m learning on my feet, having complex conversations about the way theater is made, and creating a sense of community.
Brittany Bradford (Group 47)

My journey since graduating in 2010 has been a whirlwind and has taken me places I never thought I would go. I was hungry to start in Europe and that’s where I landed my first job, at Stadttheater Bern. It was an incredible two years where I learned a lot and formed friendships that will last a lifetime. Then I moved to Israel to join the Batsheva Dance Company, which was an entirely different beast altogether. I traveled and danced and ate hummus and even learned to speak Hebrew—a little. After two years, I joined L.A. Dance project, dancing for Benjamin Millepied and with many fellow Juilliard grads! It was a joy to be among the J-yard fam as we toured the world and conquered many different pieces and projects. Three years later, it was time to change my pace and priorities. I moved back to Europe—Berlin—to freelance and to join my boyfriend. I’m now working with a few different artists, teaching from time to time, and still traveling regularly for work. Only now I have a home, with my name on the doorbell and everything.
Steph Amurao (BFA ’10, dance)