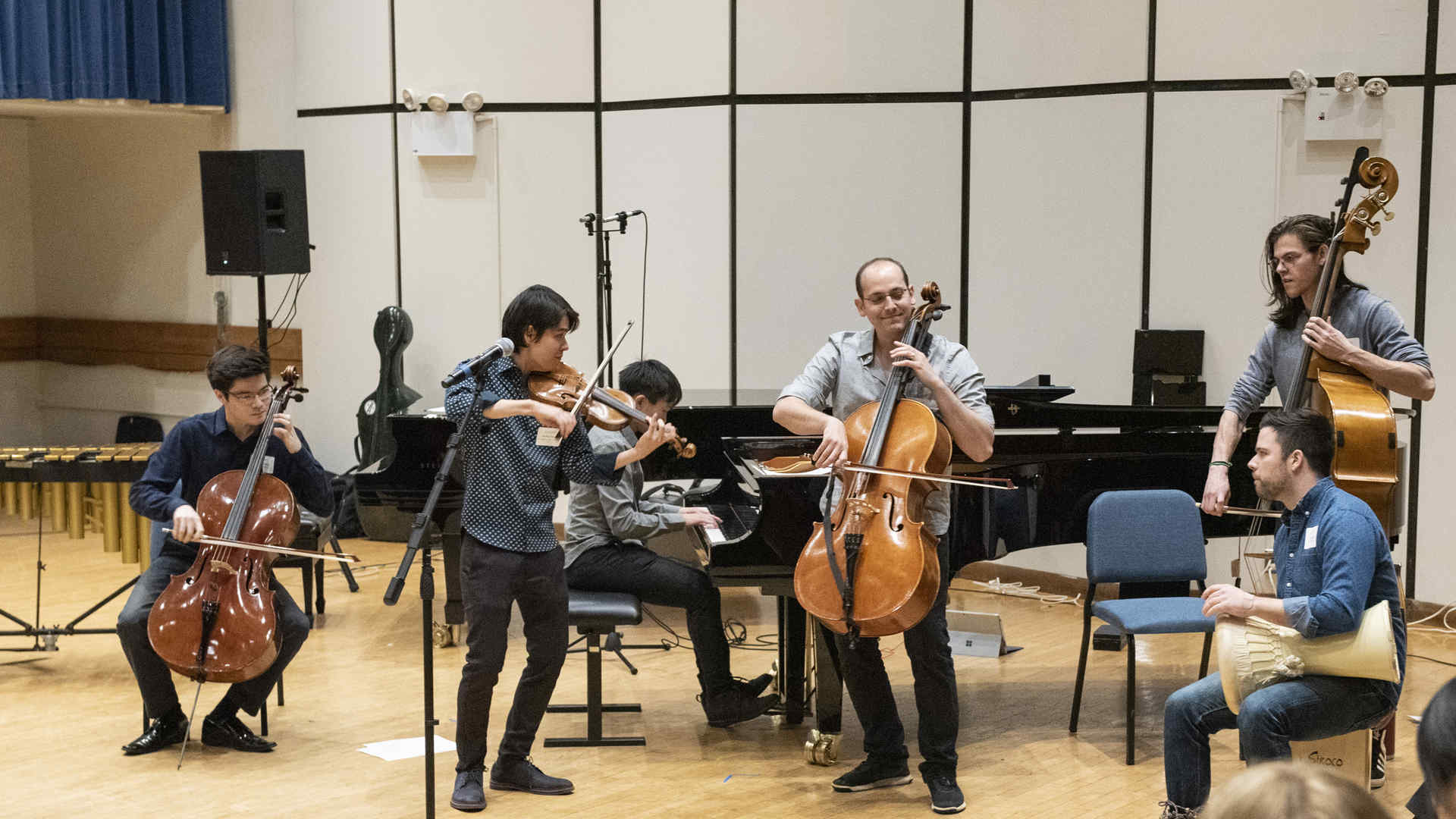 The Story Behind Global Perspectives

One of the first events at Juilliard this school year will be Global Perspectives, an alumni-organized world music workshop and jam session. The event is a follow-up to a series of workshops and a student-alumni jam session last year. This year, there's a student-only event series of workshops—on classical Indian dance and on Arabic music—that take place September 7. And on September 8, there will be a culminating performance and a reception and open jam, both of which are open to students and alumni who've RSVP'd. The organizers, Jonathan Miron (Pre-College ’10; BM ’14, MM ’18, violin) and Philip Sheegog (BM ’17, MM ’19, cello), talked to the primary teacher and instigator, Mike Block (MM ’06, cello), about the program.

Jonathan and Philip: How does it feel to be back at Juilliard for your second Global Perspectives workshop?
Mike: It’s so exciting that there is now a home at school for a lot of the things I am passionate about. I think it’s a testament to how the school is evolving, and it feels very special for me, having left the classical training I received at Juilliard to search the world for other sources of inspiration, to come back and have something to share with the community I started with.

How was your time at Juilliard?
I had a fantastic time! What I really appreciated from my teachers, Joel Krosnick and Darrett Adkins (DMA ’99), is that they were both supportive and encouraging of some of my early explorations outside of classical music. One of the transformative experiences I had here was a marathon new music concert by the entire cello department during my first year. Every cellist at school played a 20th- or 21st-century piece, and when I told Darrett Adkins I didn’t know what to perform, knowing that I was starting to improvise and compose, he encouraged me to write an original piece. It was such an inspiring and important moment to have a teacher ask me to do something creative and having the opportunity to share with all my friends.

Tell us about your journey from being a classically trained cellist to one who collaborates across genres with ease.
When I was in college, I was somewhat restless and looking for new ways to feel when I played music. I was finding those ways by joining rock bands on Craigslist and beginning to sing and play at the cello, which I found to be really satisfying. There were these early moments where I was beginning to see glimpses of whole other worlds of what music could be. In between my two years of graduate school, I went on my first tour with Silkroad Ensemble, to Japan. I was on stage with these incredible musicians playing instruments I had never seen before, and then coming back to school to play in orchestra again. The contrast to me was so clear; I knew there was more out there that I wanted to find. And so essentially after school I just kept learning and putting myself in situations where I could be a student. The summer after I graduated from Juilliard, I went to jazz camp as a student and fiddle camp as a student. Later I would go to Celtic and Arabic camps. Essentially, I’ve just never stopped learning, and I continue finding new things to work on!

Why do you think it’s important for musicians to be artistically versatile?
There are so many good reasons! Probably the most boring is that it’s simply good business sense for a young musician to be versatile because the more gigs you’re qualified for, the more gigs you’ll get. But that’s ultimately the wrong answer, because what I appreciate about being a multistyle musician is that different styles bring out different aspects of my personality. I get to express certain things when I play classical that I can’t express when I play bluegrass, and the same in the other direction as well. So when I’m playing jazz or playing my own song, I can access different parts of my personality and enjoy getting to see what else I can say through these different musical languages.

What do you hope students will take away from Global Perspectives?
When teaching, I love to inspire people to see more of themselves, and more of the world through the music they play. By accessing your creativity through improvisation and composition, you’re learning more about what’s already inside of you, which I find incredibly meaningful, especially for classically trained performers, who might not have much experience composing, improvising, or arranging. When learning music from other cultures and learning new musical languages, you get opportunities to meet interesting people from other backgrounds who you might not have otherwise met. I think learning a new language is built by learning new words and phrases, one by one, so I really enjoy empowering people by giving them new physical skills to use with their instruments so that they walk away not just inspired, but literally able to say something that they never said before.

Global Perspectives takes place September 7-8. The first day, which is open to current Juilliard students, has a dance workshop with Preeti Vasudevan exploring classical Indian dance from 10am to noon in Studio 323 and a music workshop from 4 to 6pm in Room 543 with Mike Block exploring the language of Arabic music. On Sunday, September 8, there's a culminating performance in Room 543 at 4pm and the reception and open jam take place at 5pm in Room 309. Both are open to students and alumni. Alums, to RSVP, write to [email protected] or call (212) 799-5000, ext. 344.