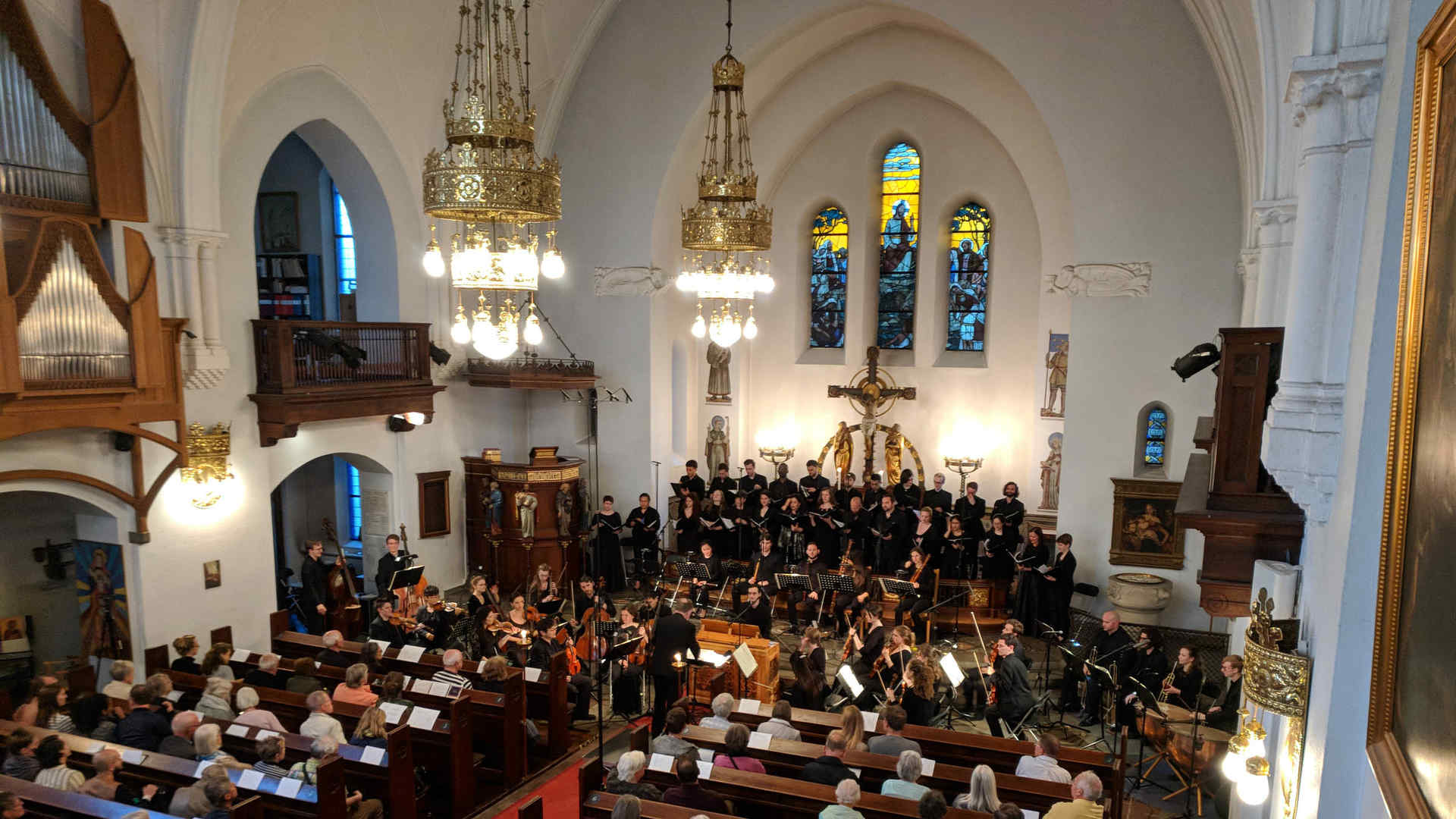 Juilliard students were performing all over the globe this summer, and we've been posting some highlights. Just after Commencement, members of Historical Performance’s Juilliard415 ensemble took part in a Scandinavian tour with their frequent collaborators, the Yale Schola Cantorum.

Lasting just shy of two weeks, our collaborative tour brought us to Gustaf’s Church in Copenhagen, Västerås Cathedral in Sweden, Helsinki’s Temppeliaukion kirkko, or Rock Church, and the grandiose Domkirke in central Oslo. Each day brought us closer together through thrilling explorations of new cultures, and the ethos of each performance bloomed with fresh meaning as we performed for eager, welcoming audiences.

Juilliard415 introduced itself at each concert with the triumphant, shining orchestral textures of Johann Christian Bach’s overture to his 1772 opera Temistocle. Next was a new work for period ensemble, Paweł Łukaszewski’s 2018 Ascensio Domini, commissioned by the Yale Institute of Sacred Music. Closing the program was Haydn’s Missa in Angustiis, or “Lord Nelson” Mass, laced with brilliant vocal solos that delve deeply into the earth and soar ever upward toward the heavens. With the Latin angustiis translating to that which concerns “narrowness” or “anguish,” this work was written against the tumultuous backdrop of a war-torn Napoleonic Europe.

In addition to our performances, one of the most memorable experiences of the tour was our chamber music collaboration with the students of the Sibelius Academy in Helsinki. During the 16-hour overnight ferry ride from Stockholm, the Juilliard and Sibelius students exchanged ideas about everything from articulation to affect, chatted about Finnish folk music and the best place to see the northern lights, looked at our hometowns on Google Maps, and shared photos of our backyards and our dogs.

Among new friends and boxed wine, our informal afternoon performance in Helsinki was enhanced by this wonderful exchange of ideas. Later that evening, in the never-quite-darkness of the late Scandinavian spring, we spent time with our new friends, laughing and chatting about future collaborations over cold Salmari, a fierce Finnish licorice liqueur. Violinist Shelby Yamin commented that “sharing ideas and exchanging musical goals at the Sibelius Academy gave me more perspective on my own studies, and has me looking forward even more to the start of the school year back at Juilliard this fall.”

Despite a fall while running in Copenhagen (don’t run on cobblestones while looking at a map!), my morning runs afforded me moments to consider how lucky we all were to be together. The majesty of the landscape, warmth of each culture, and growing bonds between us and the other students led to transformative performances, and the creative takeaways imparted to us by this magical place were invaluable.

Finding ourselves across the Atlantic, looking out into the audiences of smiling faces and closed eyes, this program underscored the emotional transcendence of our craft. This tour reaffirmed that music is a deeply emotional medium through which we are able to transcend spatial, linguistic, and cultural borders to inspire and connect with our listeners.

Bassoonist Georgeanne Banker is entering her second year, and she holds a Historical Performance Scholarship