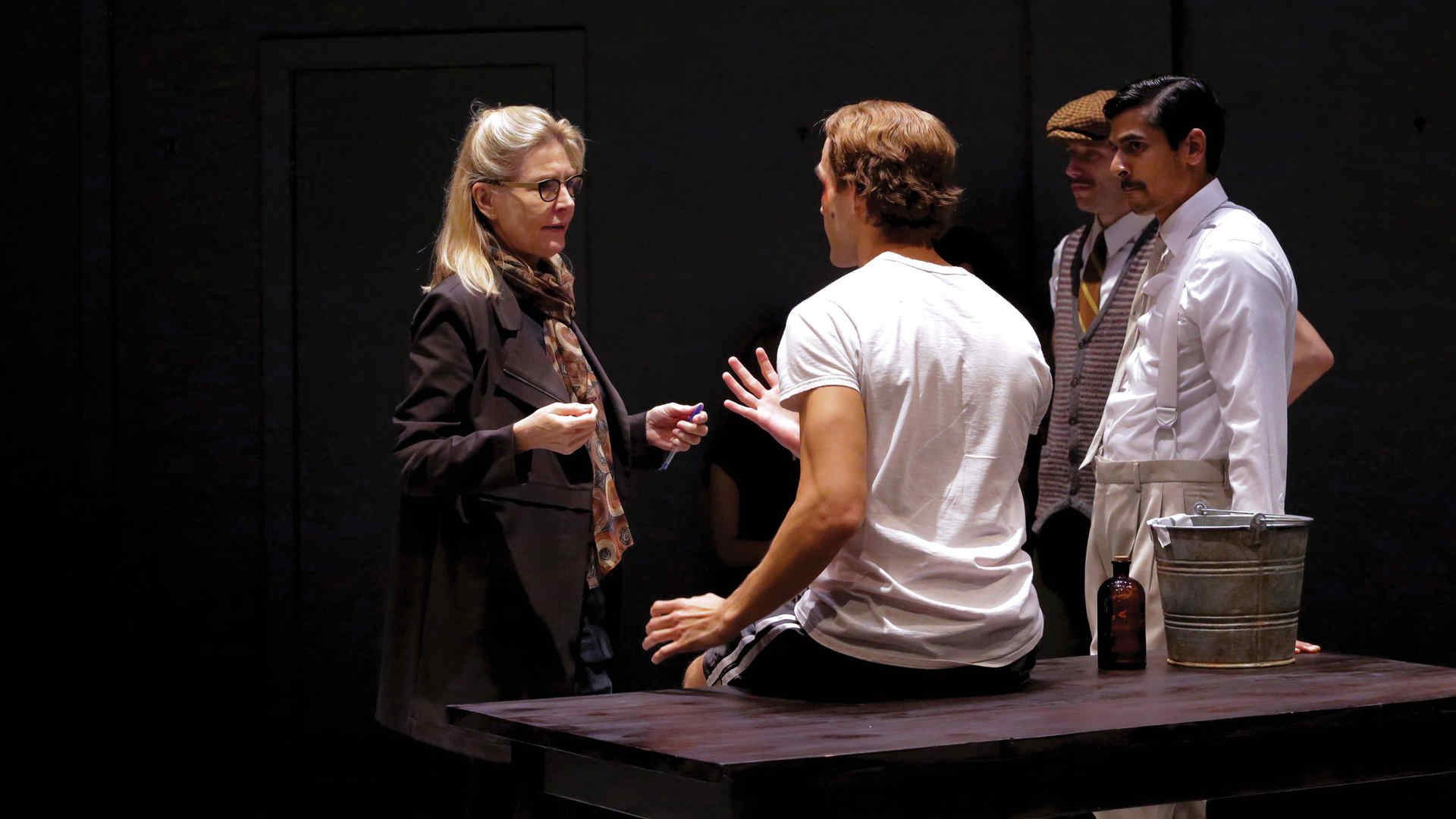 As a first-year at Juilliard, a few years after the drama program began, Janet Zarish (Group 5) was cast in George Bernard Shaw’s Misalliance, and her relationship with the work of the Irish Nobel Prize-winning playwright and political activist started to flourish. “I remember just loving Shaw’s sensibility. I’m obsessed with language, and I feel so jazzed when I read plays with gorgeous language that have all these intellectual, witty levels, where human beings are actually speaking at their capacity,” she says.

Over the years she’s become immersed in his work as an actor, educator, and director, including directing the fourth-year production of Misalliance in 2016. This month, the faculty member is directing the fourth-years in Shaw’s Major Barbara, which tells the story of the intellectual and spiritual clash between Barbara Undershaft, a major in the Salvation Army, and her estranged father, a millionaire arms dealer.

“This play is about building a world that works, building the best world that can be, building a utopian world,” Zarish says. So Shaw does “what he always does: he puts two opposites in a room and makes them speak their mind, and he has all the characters really listen to each other. They entertain new ideas, and that’s how they change, by battling it out through debate. And all of his plays are so brilliantly witty. Shaw said, ‘My way of joking is to tell the truth. It’s the funniest joke in the world’.”

The exercise of making people speak their minds and really listen to each other makes the play quite relevant in today’s polarized landscape. “Shaw shows that characters—and all human beings—have contradictions, it’s not black and white. Their virtues and vices are mixed together. Everyone in the audience has to listen to these characters and weigh themselves against them, and I love that as a method of social change,” Zarish says. This provocative play deals with themes that still resonate today, among them poverty, social inequality, gender, morality, ethics, and religion as well as the monetary greed of corporations and the paralyzing perils of idealism. “Shaw wrote Major Barbara in 1905, but not a lot has changed.”

In their final year of training, members of Group 49 are being called on to tackle the complex and juicy task of making Shaw part of their bodies. “I love that actors to take an intellectual idea and make it a personal, passionate idea,” Zarish says. She notes that Shaw speaks to such contemporary playwrights as Tom Stoppard, Lynn Nottage, and Jeremy O. Harris—all of whom are just itching to “burst open themes of politics, gender, religion, and the world we live in. Actors need to know how to craft that. You’re actually going to the gym, you’re exercising your lungs, your tongue, your mouth, your mind, so you can sculpt and craft these ideas.”

We are speaking in front of the Stephanie McClelland Drama Theater, where Zarish’s name—and the names of all the Juilliard actors who came before and after her—are on the wall. “The great thing is that Juilliard has changed a lot and it hasn’t changed at all,” Zarish says. “Every school is examining its curriculum, because you want to mirror the world, and the world is changing, it’s what makes it rich. You have to make sure that you’re giving everyone the tools that they need to go out there.” What hasn’t changed “is the deep understanding of what artistic training should be—a passion for the humanistic parts of the arts changing the world and giving every actor the skills to climb into any playwright’s work and give their heart and mind and soul to storytelling so the audience can be moved and challenged.”

Gabriela Saker, who holds McKnight Foundation and Juilliard scholarships and is the president of ALAS, the Association of Latin American Students, received her bachelor’s in journalism from the University of Puerto Rico (Rio Piedras) and worked as a journalist before starting her drama master’s