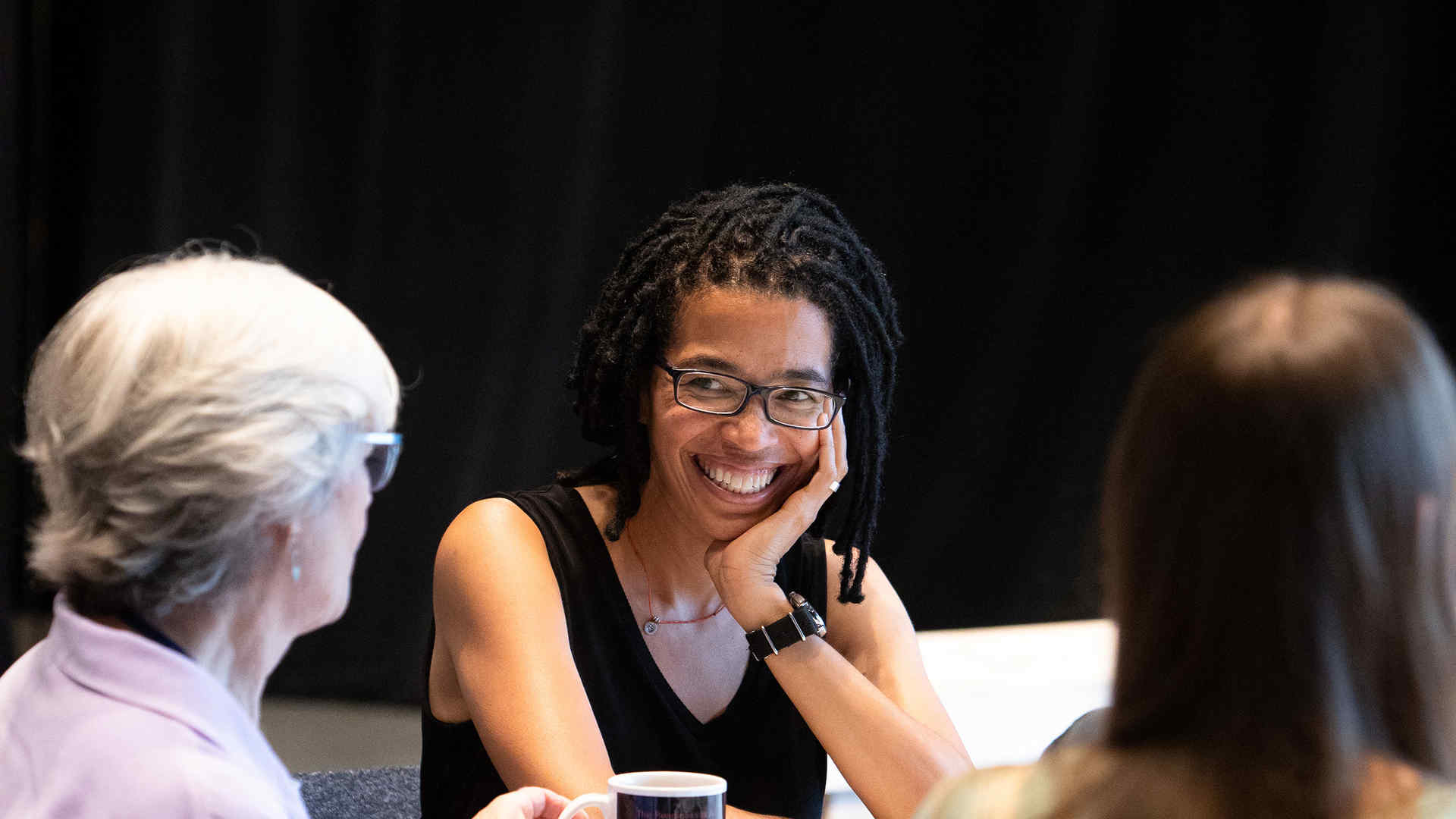 “I don’t write love stories!” Pulitzer Prize-nominated playwright Tanya Barfield (Artist Diploma ’02, playwriting) proclaimed at one point in her career. She was laughingly telling this story one recent evening as she sat in on rehearsal for the fourth-year production of her play Bright Half Life—a love story. She was speaking to director Rebecca Guy and actors Sekai Abeni and Mary Cavett, who play Vicky and Erica—the two characters around whom this love story revolves. Bright Half Life premiered at the Women’s Project Theatre in 2015. Four years and many productions later, the playwright talked about the play’s genesis and what shifted that once-resolute proclamation.

Having been a student here in 2002, how does it feel to have Bright Half Life be the first play of yours produced at your alma mater?
I find it surprisingly meaningful. The caliber of work at Juilliard is consistently stellar, and the actresses, Mary and Sekai, playing Erica and Vicky, are phenomenally talented. I feel quite lucky.

What changed from “I don’t write love stories!” to now? And why this love story?
I’ve always been interested in multilayered plays written on a huge canvas. When I was younger, I didn’t understand love in all its stages. I’m not saying that I understood all the stages of love when I wrote Bright Half Life, but I certainly have come to understand more about life and love now than I did in my 20s and 30s.

Vicky and Erica are an interracial couple—Vicky’s character is written as a Black woman, but the play includes addendums to some of her dialogue, so that the character could also be played by a non-Black actress of color. Can you elaborate on that decision?
I intentionally wrote Vicky as an African-American woman. Yet, unlike most of my other plays, Bright Half Life is not specifically about race. The play touches on racial identity, but this theme is seen only in the context of what it means to be in an interracial relationship, as opposed to what it means to be a Black woman. Perhaps this is why the character of Vicky resonates with women from various cultural backgrounds. When I was preparing the play for publishing, a small theater approached me, asking permission to cast a light-skinned Latina actress in the role of Vicky. The theater explained that this actress discovered the play, brought it to the theater and passionately identified with Vicky as a character. Around the same time, an Asian-American coworker told me she had brought a group of her friends to the play and said her Asian-American friends related to Vicky, and despite the character’s differences (these women were all straight), Vicky’s story was their story.

These two incidents occurred in the same month and that confluence led me to think about what it would mean to cast other non-Black actresses of color in the role. While I was initially hesitant—I didn’t want Vicky to be seen as an all-purpose “other”—I couldn’t ignore the fact that women from very different backgrounds related to Vicky. Although I normally think of race as being very specific to character, in the case of Bright Half Life, the protagonist is the relationship, not the characters. And this relationship story is an interracial one. If women from multiple backgrounds are able to breathe life into it, that’s what is most important to me.

Bright Half Life explores the intricate everyday minutiae of Vicky and Erica’s relationship while still leaving a lot of the specifics more felt than spoken; their love feels both very much that of an interracial lesbian relationship and like that of any relationship. What did writing this play mean for you when you’d first conceived of it with regards to representation and whose stories are allowed to be presented on stage— and what does it mean for you now?
When I wrote Bright Half Life, I didn’t realize that it was breaking ground as a “lesbian” play. But, after the premiere, a number of women told me that it was the first time that they experienced their own story on stage. That gave me pause. It occurred to me that I had become so accustomed to the omission of gay women as characters—not to mention a lesbian love story—that I barely questioned the degree to which we had been left out of the larger cultural narrative. And yet while Erica and Vicky’s story is quite specific, I’m pleased that the play has a universal appeal. It’s the story of a relationship through time. It could be any relationship. The fact that it’s two women is just one aspect of the story.

Not only were you a student at Juilliard, you were also the Drama Division literary manager and have also taught playwriting at Primary Stages and Barnard College. Bright Half Life is so much about perspective shifts made possible by lived experience—how has teaching and interacting with emerging playwrights influenced your writing?
In teaching playwriting, I’ve often been dismayed by the fact that so many of my students write abbreviated TV-friendly scenes. I like to tell them, “Don’t write a play that could be written on Twitter.” And I’ve encouraged students to challenge themselves to write 15-20 page scenes, or longer. What happens when you linger with your characters? And yet, when I look at the kaleidoscope of scenes in Bright Half Life—the majority are quite brief. They exist as flashes of disorganized memory.

As I wrote the play, I initially tried to make it conform to a pattern, but randomness always took over. That’s when I realized what the play was actually about—the story of one’s life is merely a collection of moments. Unlike a traditional play, in which meaning is found within the scenes, Bright Half Life’s meaning emerges through a series of nonlinear moments in concert with one another. A different sequence would create a different meaning. Perhaps I was influenced by my own “write longer scenes” soapbox. I rarely write the play that I plan to write. For me, writing is an act of personal rebellion.

Editor's note: A few weeks after this interview was conducted, it was announced that Marsha Norman would be stepping down from leading the playwriting program and that Barfield would join David Lindsay-Abaire as co-director.