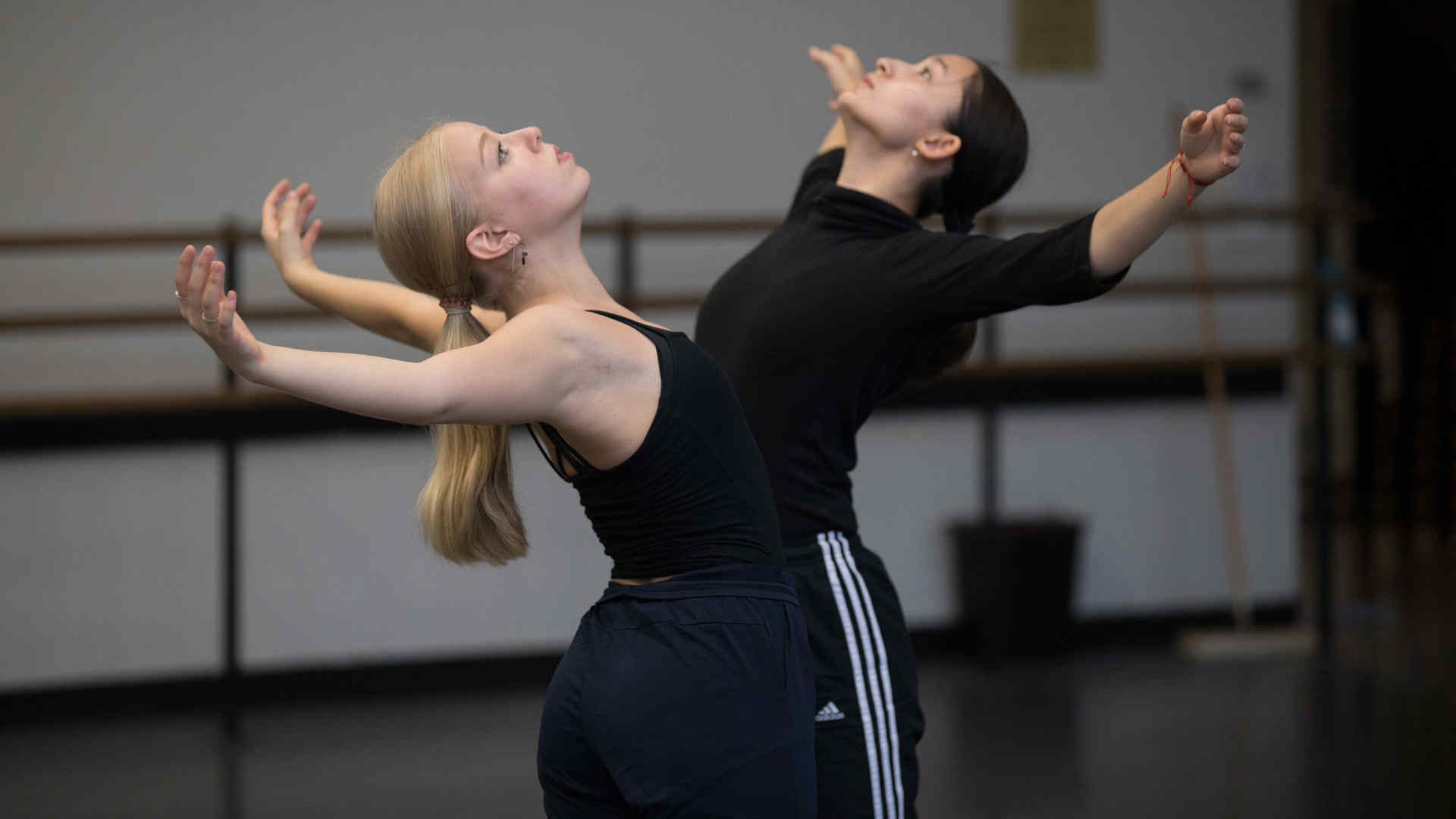 Each fall, six third-year dancers join six composition students for a class called Choreographers and Composers (aka ChoreoComp) in which they create work together that’s then performed by second-year dancers and assorted student musicians. Ben Sellick spoke with one of the choreographer-composer pairs at a rehearsal.

By Ben Sellick
Four dancers, front-facing, stand in a row—feet planted—and gesture, isolated in independent bursts of movement. The music is a steady, symmetrical piano figure: a three-note motive repeating over an evolving accompaniment. The dancers lace the gestures together in phrases, suddenly halting, suddenly restarting, over the unfolding music. The effect is eerie, direct, and beautiful.

“That wasn’t really intended to be for show,” says Kaine Ward, a third-year dancer and choreographer from London. He speaks with a warm intensity, expressive and unhurried. “It was actually intended just as a way to generate material. Then I was like, just do it. Just show them. And that was probably the part that everyone liked the most. And I was like, damn it, you’re not meant to like that,” he adds, laughing.

The annual Choreographers and Composers (ChoreoComp) class fosters many such moments of serendipity. Kaine’s piece, set to music by second-year master’s composer Jordyn Gallinek, is centered on the concept of the butterfly effect, the chaos theory phenomenon that describes how small, innocuous causes can lead to big, unexpected effects.

Kaine’s piece has the dancers repeat a simple opening, coming together from different directions, but with each repetition, minor divergences transform the opening into something unique. Jordyn’s music similarly works with the repetition of a single motive, transformed by the forces surrounding it. The dance and the music, often in oblique relationship, similarly come together and transform one another, as do the composers and choreographers themselves.

Jordyn and Kaine were paired early in the class in mini collabs, a kind of artistic speed dating. Each permutation of composer and choreographer is given 15 minutes and a simple prompt (light and dark, soft and hard, misdirection) to create something together. After each pair has cycled through, the professors leave the students to figure it out. “So Jerome and Janis [Begin and Brenner, two of the faculty members who teach the class; Daniel Ott is the third] just kind of left the room,” Kaine says, “and they’re like, ‘Okay, goodnight. We’ll see you tomorrow. Can one of you email us the pairings?' So we all just sat in a circle, looking at each other like, ‘how do we wanna to do this?’” “We kinda just gave each other a look,” Jordyn says.

Following the pairings, the pieces begin to evolve in their own directions. Jerome encourages the students to come up with three or four ideas—music and movement—and then to try “all of the music with all of the movement.” Many combinations don’t work, but “sometimes it’s the best thing ever,” Kaine says.

The class encourages a process of divergence and discovery throughout. Though each pair is producing a piece for performance in November, the pairs sometimes trade partners for inspiration. “That part is actually quite fun because things get born that aren’t anticipated or expected,” Kaine says.

For Kaine, the butterfly effect process has been reinvigorating. “In the summer leading up to this I was working through a bit of a block,” he says. “You have a lot of time to think, especially when it’s just you making it. It’s your baby, it’s your singular idea. And then you get here and it’s like, ‘forget everything you thought about because we’re just gonna start from scratch.’ And I think that’s the best thing about this class.”