NEW YORK –– Juilliard Songfest features songs by Robert and Clara Schumann on Thursday, December 5, 2019, at 7:30pm in Alice Tully Hall. The program is curated and performed by artistic director and pianist Brian Zeger with singers from the school’s Ellen and James S. Marcus Institute for Vocal Arts.

Tickets at $10 are available at juilliard.edu/calendar.

About the program, Brian Zeger writes: “Robert and Clara Schumann shared a fertile personal and artistic collaboration throughout their lives together. They met through Clara’s father, the powerful and domineering Friedrich Wieck, who for a time was Robert’s piano teacher. Due to fierce opposition, they were able to marry only upon Clara’s 21st birthday in 1840. The frustration of their earlier forced separation and the revelation of their powerful love released a torrent of song composition in the 30-year-old Robert. Most of Schumann’s well-known songs are from 1840, an extraordinary creative outpouring for a composer whose work up to that point had been primarily piano music. The first half of our program reflects this joyous period of new love. Schumann’s later years were shadowed by increasing mental illness, which took a heavy toll on his marriage. Bearing a total of eight children, Clara heroically continued her performing career while championing Robert’s music. Schumann’s songs grew even deeper in their expression of extreme emotional states, encompassing vertiginous mood swings and hallucinatory visions.”

Originally from Dallas, tenor Chance Jonas-O’Toole is pursuing a master of music degree at Juilliard, where he also completed his undergraduate studies. In the past season, Jonas-O’Toole sang the role of the Sailor in Juilliard Opera’s touring production of Dido and Aeneas. Also at Juilliard, he has portrayed the Prologue in The Turn of the Screw, Mercure in Hippolyte et Aricie, and Nebuchadnezzar in The Burning Fiery Furnace. He has completed two fellowships at the Tanglewood Music Center, where he performed in programs of Bach cantatas under John Harbison, and multiple other recitals in Seiji Ozawa Hall. He is a student of William Burden, and he holds the Mildred H. Kellogg Scholarship, Arthur B. Barber Scholarship, and Anna Case Mackay Scholarship

Originally from San Francisco, baritone Kyle Miller is pursuing a master of music degree at Juilliard, studying with Robert White. Miller recently performed on the Perelman Stage at Carnegie Hall as the baritone soloist in Stravinsky’s Les Noces and at Alice Tully Hall in Stravinsky’s Pribaoutki. His prior operatic roles include Demetrius in A Midsummer Night’s Dream and Moralès in Carmen with the Chautauqua Institution, Marquis de la Force in Dialogues des Carmélites, Conte Almaviva in Le nozze di Figaro and Vincenzo Biscroma in Donizetti’s Viva la Mamma! at the Oberlin Conservatory of Music, where he received his bachelor’s degree. This season, he will sing the role of Chris the Citizen in The Mother of Us All in collaboration with the New York Philharmonic and the Metropolitan Museum of Art as well as Customhouse Sergeant in La bohème, in addition to covering the role of Marcello, at Juilliard. He holds a Toulmin Foundation Scholarship.

Keshav Moodliar (MFA '19, drama) is an actor from New Delhi, India. His recent credits include Romeo and Juliet at the Shakespeare Theatre of New Jersey, Measure for Measure with the Acting Company, Red Speedo at Juilliard, An Octaroon with the Chautauqua Theatre Company, and Once Upon a Time in the Berkshires at the Williamstown Theatre Festival. He can also be seen in the mini-series Sink Sank Sunk. He is a graduate from Juilliard.

From Alexandria, Virginia, soprano Jessica Niles is pursuing her master of music degree, where she studies with Edith Wiens. Concert highlights include Handel’s Aminta e Fillide with Les Arts Florissants at the Festival Dans les Jardins de William Christie, Gavrilin's Chimes with Cantori New York at National Sawdust, and Handel’s Israel in Egypt with MasterVoices at Carnegie Hall. Niles regularly curates recitals of art song and chamber music, including Schoenberg’s String Quartet No.2, and premieres new works including her commission The Opposite of Loneliness: A Chamber Piece (Wenzelberg). Niles was a Young Artist at Aspen Music Festival, performing Susanna in Le nozze di Figaro, and at Opera Theatre of St. Louis, covering in the world premiere of Fire Shut Up In My Bones. Roles include Zerlina in Juilliard Opera’s Don Giovanni and Adina in L'elisir d'amore. Niles will perform Armida in Juilliard’s Rinaldo, touring to Göttingen International Handel Festival and SPOT Groningen. She is the proud recipient of a Kovner Fellowship.

Lauren Norvelle (BFA ’17, drama) is delighted to be returning to her alma mater and to be performing a second time with Juilliard Songfest. Since receiving her degree from Juilliard, she has been pursuing her career in New York City. Norvelle recently wrapped on season three of The Marvelous Mrs. Maisel working opposite Jane Lynch and Cary Elwes. Other notable credits include The Deuce (2019), Bull (2017), Law and Order: SVU (2017), and Carpetland! (2017).

American pianist Chris Reynolds has made a name for himself as both a soloist and a collaborator. He is currently a doctoral candidate at Juilliard, where he studies with Brian Zeger, Lydia Brown, Jonathan Feldman, JJ Penna, and Cameron Stowe. A three-time winner of the Juilliard Vocal Arts Honors Recital, he has performed at Bayreuth, Carnegie Hall, and Tanglewood, among other venues. He has been a fellow at SongFest and Aspen and has worked at the Metropolitan Opera and Lincoln Center Theater as an opera coach/répétiteur. He joins the Lyric Opera of Chicago in 2020 as ensemble pianist for the Ryan Opera Center. He holds the Celia Ascher Doctoral Fellowship.

Born and raised in New York’s Hudson Valley, soprano Libby Sokolowski has performed opera and musical theatre throughout the region. Most recently, she has appeared as Lillian Russell in Thomson’s The Mother of Us All (Hudson Opera House, directed by R.B. Schlather). She has also sung several concert works and new premieres, both upstate and at Juilliard. In 2018 Sokolowski placed first in both the Schmidt Competition and the National Hal Leonard competition as well as second in the Classical Singer competition. The 2019 summer season brought her to the Internationale Meistersinger Akademie as an apprentice artist, where she performed in several concerts, including a performance with the Nürnberger Symphoniker led by Michael Hofstetter. She is in the second year of her bachelor’s degree studies at Juilliard, where she studies with Edith Wiens. She holds the Mitzi Scholarship and the Olia and Michael Zetkin Scholarship and is supported by the New York Community Trust/Anna Schoen-René Fund.

Mezzo-soprano Erin Wagner, hailing from El Paso, is a master’s student studying with Darrell Babidge at Juilliard. Her upcoming 2019-20 performances include Anne in Virgil Thomson’s The Mother of Us All in collaboration with the New York Philharmonic and the Metropolitan Museum of Art, a concert with the Friends of Mozart organization, Lydia Brown’s Liederabend highlighting new compositions, and Carnegie Hall’s SongStudio 2020. Her undergraduate degree is from the Manhattan School of Music, where she studied with Joan Patenaude-Yarnell and performed in Mozart’s Requiem, Warren Jones’ seminar, and as Mrs. Herring in Albert Herring. She received the 2019 Bonnie Lincoln Voice Scholarship at the Chautauqua Institution, where she performed Hippolyta in A Midsummer Night’s Dream, covered Romeo in I Capuleti e I Montecchi, and collaborated with Mikael Eliason in recital. In 2018 Wagner was awarded the Colburn Fellowship at SongFest and attended Matthew Rose’s Scuola di Bel Canto. She holds the Philo Higley Scholarship, the Allen and Judy Brick Freedman Scholarship, and the Lorna Dee Dean Scholarship.

Recognized as one of today’s leading collaborative pianists, Brian Zeger (MM ’81, piano) has performed with many of the world’s greatest singers including Marilyn Horne, Deborah Voigt, Anna Netrebko, Susan Graham, René Pape, Kiri Te Kanawa, Frederica von Stade, Piotr Beczala, Bryn Terfel, Joyce DiDonato, Denyce Graves, and Adrianne Pieczonka in an extensive concert career that has taken him to the premier concert halls throughout the U.S. and abroad. His most recent recording, A Lost World—Schubert Songs and Duets with Susanna Phillips and Shenyang, was released by Delos in 2018. Other Delos recordings include All Who Wander, a recital disc with Jamie Barton; Preludios, Spanish songs with Isabel Leonard; Strauss and Wagner lieder with Adrianne Pieczonka; and Dear Theo: Three Song Cycles by Ben Moore with Paul Appleby, Susanna Phillips, and Brett Polegato. In addition to his concert career, he serves as artistic director of the Marcus Institute for Vocal Arts at Juilliard and recently completed eight years as the executive director of the Metropolitan Opera Lindemann Young Artists Development Program.

About the Ellen and James S. Marcus Institute for Vocal Arts

One of America’s most prestigious programs for educating singers, The Juilliard School’s Ellen and James S. Marcus Institute for Vocal Arts offers young artists programs tailored to their talents and needs. From bachelor and master of music degrees to an advanced Artist Diploma in Opera Studies, Juilliard provides frequent performance opportunities featuring singers in its own recital halls, on Lincoln Center’s stages, and around New York City. Juilliard Opera has presented numerous premieres of new operas as well as works from the standard repertoire. 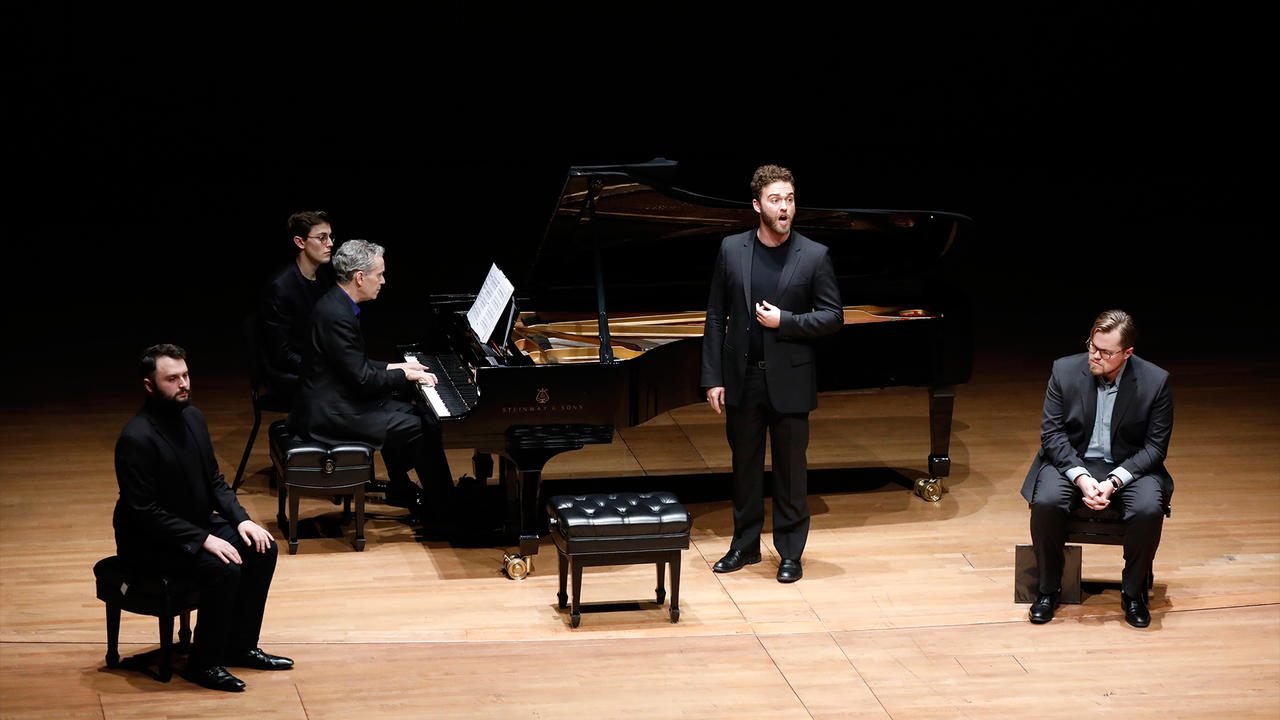