Class Also Live-Streamed at juilliard.edu/live and Shown on medici.tv on December 14, 2019, at 2pm (EST)

Tickets for Juilliard master classes are $10 and available at juilliard.edu/calendar.

Pianist Robert Levin has been heard throughout the United States, Europe, Australia, and Asia in recital, as soloist, and in chamber concerts. He has performed with the orchestras of Berlin, Birmingham, Boston, Chicago, Cleveland, Los Angeles, Montreal, Tokyo, and Vienna with such conductors as Bernard Haitink, Neville Marriner, Seiji Ozawa, Simon Rattle, Esa-Pekka Salonen, and Joseph Silverstein. On fortepiano, he has appeared with the Academy of Ancient Music, Handel and Haydn Society, and Orchestre Révolutionnaire et Romantique with John Eliot Gardner, Christopher Hogwood, Charles Mackerras, Nicholas McGegan, and Roger Norrington. He has performed frequently at such festivals as Sarasota, Tanglewood, Ravinia, Bremen, Lockenhaus, and Verbier, and at the Mozart Week in Salzburg. As a chamber musician, his partners include Steven Isserlis, Kim Kashkashian, Ya-Fei Chuang, and Hilary Hahn.

Levin is renowned for his restoration of the Classical period practice of improvised embellishments and cadenzas; his Mozart and Beethoven performances have been hailed for their active mastery of the Classical musical language. He has made recordings for DG Archiv, CRI, Decca/Oiseau-Lyre, Deutsche Grammophon Yellow Label, ECM, New York Philomusica, Nonesuch, Philips, and SONY Classical. These include the complete Bach concertos with Helmuth Rilling as well as the English Suites and The Well-Tempered Clavier for Hänssler’s 172-CD Edition BachAkademie. Other recordings include a Beethoven concerto cycle with John Eliot Gardner and the Orchestre Révolutionnaire et Romantique for DG Archiv, and a Mozart concerto cycle with Christopher Hogwood and the Academy of Ancient Music for Decca Oiseau-Lyre as well as the complete Beethoven cello and piano works for Hyperion with Steven Isserlis, which was named a Gramophone magazine, recording of the month in 2014.

Levin studied piano with Louis Martin and composition with Stefan Wolpe in New York, and he worked with Nadia Boulanger before attending Harvard. Upon graduation he was invited by Rudolf Serkin to head the theory department of the Curtis Institute of Music, a post he left after five years to take up a professorship at the School of the Arts, SUNY Purchase. In 1979 he was resident director of the Conservatoire Américain in Fontainebleau, France, at the request of Boulanger, and taught there from 1979 to 1983. Between 1986 and 1993, he was professor of piano at the Staatliche Hochschule für Musik in Freiburg im Breisgau, Germany. President of the International Johann Sebastian Bach Competition and a member of the American Academy of Arts and Sciences, he has also been Dwight P. Robinson Jr. Professor of the Humanities at Harvard University. In 2016, he was inducted as Honorary Member of the American Academy of Arts and Letters. He was the inaugural Hogwood Fellow of the Academy of Ancient Music in 2017 and 2018. 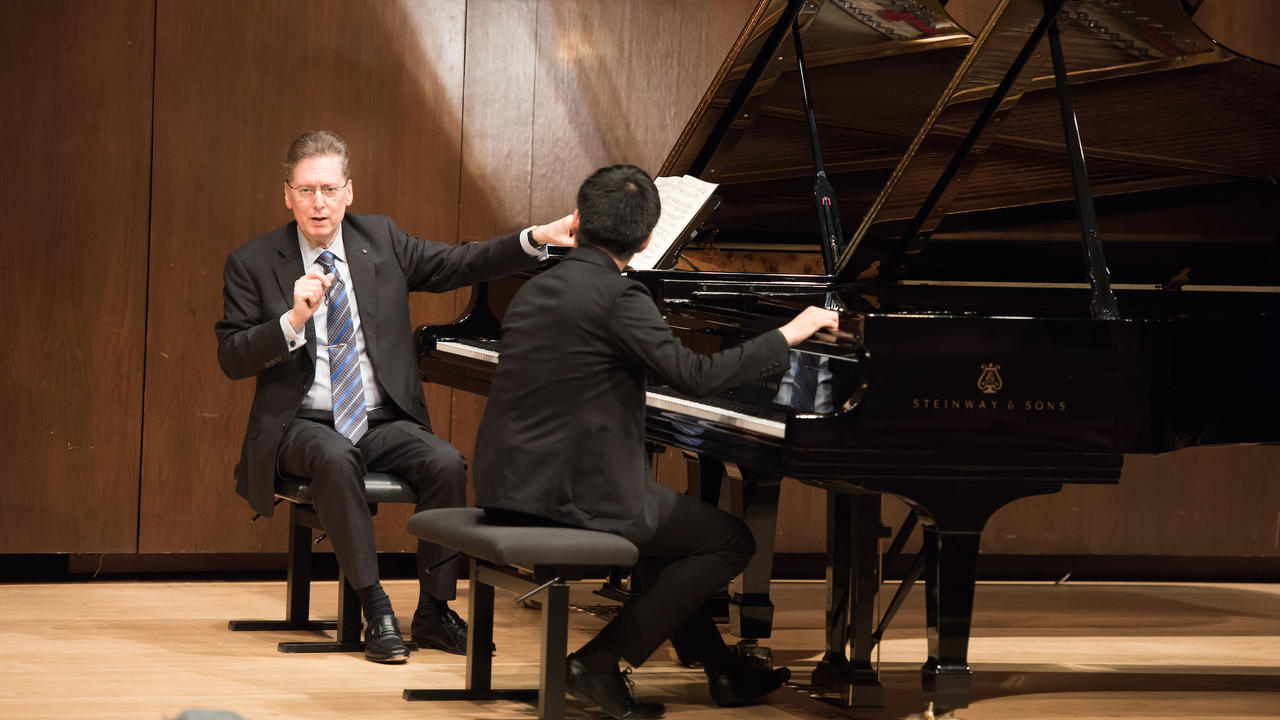 Pianist Robert Levin Will Give a Master Class at Juilliard on Dec. 9 (photo by Nan Melville)