The Inspiring Perplexing Music of Cage and Xenakis 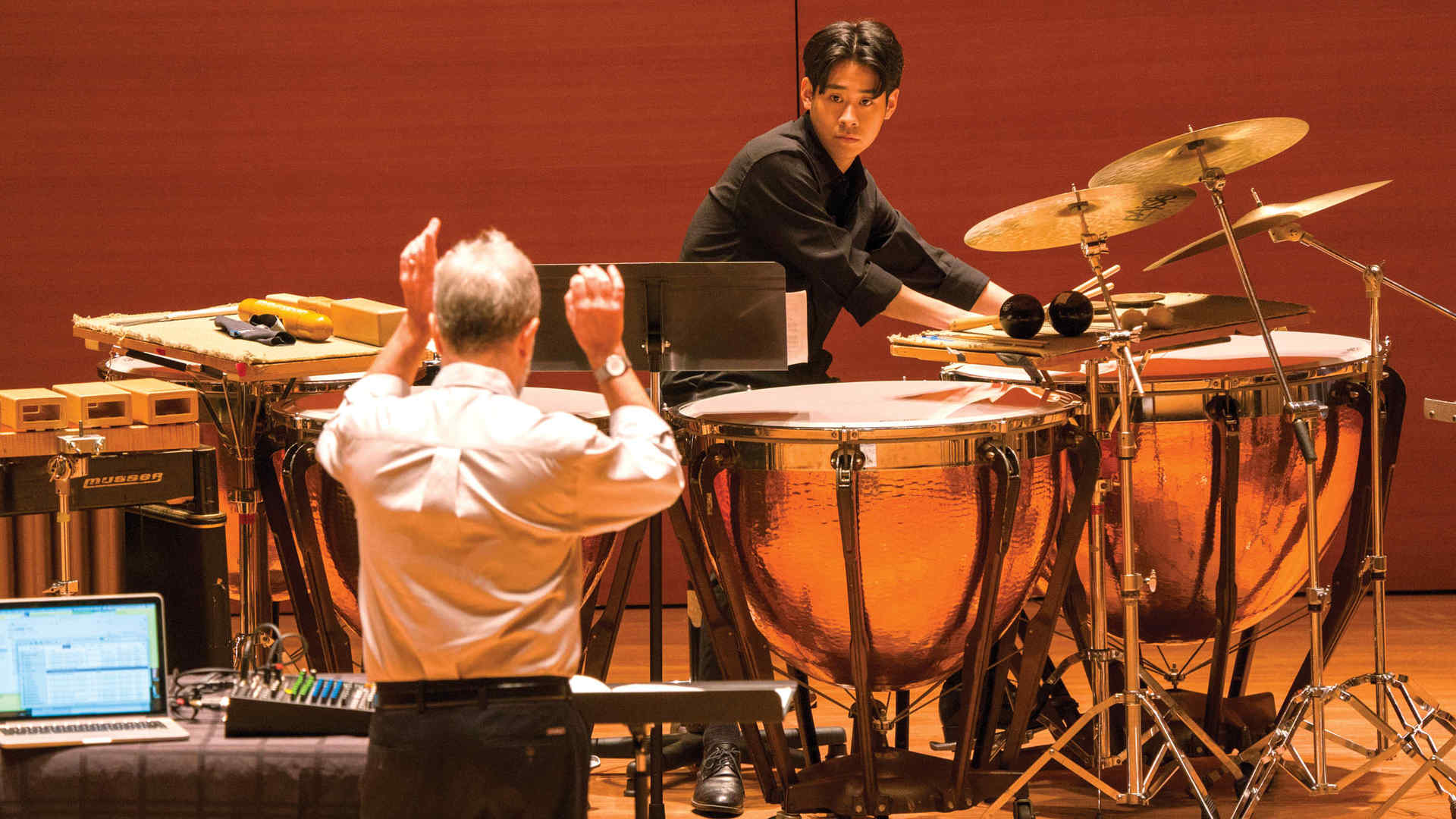 On February 3, the Juilliard Percussion Ensemble will present some of the most significant works for percussion ensemble from the 20th century: John Cage’s Constructions 1–3 and Iannis Xenakis’ Pléïades. Fascinated with proportion, mathematics, randomness, and the visceral but familiar impact of percussion, Xenakis and Cage used the percussion ensemble to create music that has inspired and perplexed performers and listeners for decades. Xenakis and Cage were outliers in technique and practice, with both men renouncing the strict serialist processes and compositional dogma of their contemporaries to create their own musical language and structural hierarchy. In the 21st century, these once revolutionary and disruptive works have become pedagogical standards for percussion departments, composers, and concert halls across the globe.

Cage’s three Constructions are characterized by the different instrument groups used in each section, and a unique formal structure for each Construction based on phrase lengths and proportion. The first two Constructions use a piano or prepared piano, usually calling for the player to reach across the keyboard to play on the strings.

The First Construction uses various metals, ranging from the orchestral sounds of glockenspiel and thunder sheet to industrial sounds of anvils, car brake drums, and the curious water gong, in which glissandi are facilitated by dipping the gong in water. The Second Construction features an array of metal sounds, shakers, and drums. The Third Construction, the most commonly performed of the trio, features an ensemble of tin cans, drums, various metals, and shakers. The setup for Third Construction has become standard for percussion ensembles, inspiring many works for similar instrument lists and logistics. The Third Construction also features the famous “conch shell” horn that has led to decades of percussionists expanding their lung capacity to tame this memorable nautical nuisance.

In contemporary music, the sounds and instruments of Cage’s Constructions have all become orchestral and familiar. But in 1939, it would have been jarring in a way that contemporary listeners can’t imagine to hear “concert” music for these sounds. Cage was trying to bring the sounds of a noisy world into our musical language, and this concept had a far-reaching effect on many composers who followed him. One can hear the sounds of construction sites, trains, kitchens, markets, and the natural world all blending together with unmistakable pulse. When Cage wrote the Constructions, there was hardly any precedent for a percussion ensemble.

Just less than 40 years later, Xenakis was commissioned by the prestigious Les Percussions des Strasbourg to write Pléïades (1978), and percussion music took another leap forward. The word Pléïades, as Xenakis explains in the score, means both pluralities and several, and these meanings are represented by plurality of rhythm and pitch, ideas, and modes, which are developed through tempos, polyrhythms, and proportions. It’s also manifested by the six players with equally intricate parts, frequently playing polyrhythms against each other. This can be heard as one player diverges from the unison rhythm or as the ensemble members battle each other in dense textures of cloudlike rhythmic counterpoint. Simple ideas are changed and developed until they become unrecognizable; Xenakis described these divergences as a range of “faithfulness” to the original musical atom.

In the Claviers movement, which features all keyboard instruments—xylophones, marimba, and vibraphones—the pitch material comes from Xenakis’ work with mathematical sieves that allow for long scalar patterns extending beyond the octave. Perhaps the most “tonal” passage in Xenakis’ music occurs in the middle of Claviers with a vibraphone solo that outlines a more accessible portion of his sieve for a moment of rest amid the confusing tonalities that dominate the movement.

Xenakis wrote Métaux for instruments that he created for this work called sixxen—six sets of 19 metal bars made from aluminum and mounted like a keyboard. They are tuned in patterns of quarter and third tones, such that there will never be a unison between the six players and the harmonic space within traditional diatonic intervals can be completely saturated. An architect before becoming famous as a composer, Xenakis evokes an avant-garde construction yard with his transfixing, and decidedly loud, sixxen. They are also reminiscent of the Greek Orthodox church’s metal semantron, on which busy traditional rhythms are hammered on hanging slabs of metal and wood.

Peaux is this work’s most primal movement, featuring only drums and timpani. Players within the ensemble take on different roles and personalities, and the moments of unison signal the beginning and ends of large-scale formulaic ideas. And Mélanges combines all three movement timbres as a final overview of this strange world of sound and rhythm.

The title of Pléïades also refers to the constellation by the same name, known commonly and in Greek mythology as the seven sisters. Listening to Pléïades is an experience similar to casually gazing at the constellation: Six or seven stars are visible, but they are shrouded in a fuzzy cloud. In reality, the constellation is made up of hundreds of stars clustered together and passing through cosmic dust, and the closer one looks, the more stars are revealed. Xenakis’ masterpiece lets listeners just enjoy the central waves of sound and rhythm or more intently discern the labors of six musicians creating this intricate work of art.