Clarence B. Jones, Lawyer and Draft Speechwriter for Martin Luther King Jr., and Former Juilliard Student, Was at the School for a Series of Events Celebrating MLK Week

NEW YORK –– Juilliard President Damian Woetzel presented civil rights icon Clarence B. Jones with the President’s Medal on January 23, 2020, as part of the school’s annual Martin Luther King Jr. Lecture. A noted activist and lawyer, Jones studied clarinet at Juilliard’s summer school high school program in 1946 and 1947. He later joined the civil rights movement and served as lawyer, draft speechwriter, and political advisor to Martin Luther King Jr. Among the speeches he assisted King with is his celebrated “I Have a Dream” speech, which he delivered at the March on Washington on August 28, 1963.

“We are incredibly proud to count Dr. Jones as as a former student and a valued member of the Juilliard family,” said Juilliard President Damian Woetzel. “I am pleased to give him this President’s Medal—the first in my tenure—in honor of the abiding example he has set as an artist citizen, and in recognition of his decades of dedication to the advancement of human and civil rights and ongoing commitment, in word and action, to the betterment of American society.”

In accepting the President’s Medal, Jones said, “Juilliard is a community of master craftspeople, entrusted with reinvigorating and replenishing a part of our culture that is so necessary. I’m honored to receive this recognition from Juilliard.”

Click here to watch the whole medal presentation and lecture.

The medal presentation and Jones’s lecture—“Apostle of Love, Nonviolence, and the Pursuit of Excellence”—was the culmination of the school’s annual week celebrating King and his legacy. Earlier in the week, Jones participated in a series of events with faculty, students, and staff, in which he talked about his experiences with the civil rights movement and his musical studies at Juilliard, and spent time observing classes in dance, drama, and music. Throughout this time at Juilliard, Jones shared his reflections on working closely with King and connected his musical training as a Juilliard student to his ability to translate ideas into some of King’s most memorable speeches.

Juilliard students had numerous opportunities to engage with Jones in conversation as well as through their classwork. Jones’ lecture was preceded by a student string quartet performance, followed by a musical tribute by Anthony McGill, artistic director of Juilliard’s Music Advancement Program and principal clarinet of the New York Philharmonic, who was inspired by Jones’ lifelong work. “You bring us so much hope and so much joy,” McGill said. Following the lecture, Jones enjoyed a performance by a jazz ensemble and received a surprise performance in his honor of an excerpt of “I Have a Dream” performed by a drama student juxtaposed with a clarinet trio performing the Adagio movement from Mozart’s Serenade No. 1, linking Jones’ musical training and speechwriting.

The Juilliard President’s Medal was established in 2005 to honor individuals who have made in indelible impact on society and serve as significant role models at Juilliard and in the broader community. The medal itself was created by renowned graphic designer Milton Glaser. This is the first award given by President Damian Woetzel, who became Juilliard’s seventh president in July 2018.

The weeklong events were co-sponsored by Juilliard’s Liberal Arts Department, the Office of Student Affairs, and the Office of the President.

About Clarence B. Jones
Clarence B. Jones is currently an adjunct professor at the University of San Francisco and a scholar/writer-in-residence at the Martin Luther King Jr. Research and Education Institute at Stanford University. He has had a distinguished and heralded career, in which he served as political advisor, lawyer, and draft speechwriter for the Martin Luther King Jr. He worked with Sanford I. Weill and Arthur Levitt Jr. early in all of their careers and was the first African American partner in a Wall Street investment banking firm. He was been twice recognized as Fortune magazine’s “Business Man of the Month,” and founded successful financial, corporate, and media-related ventures. He has also provided strategic legal and financial consulting services to several governments around the world including the Bahamas, the Dominican Republic, Jamaica, and Zambia.

Jones has received numerous state and national awards recognizing his significant contributions to American society. Through his work in the civil rights movement, he has dramatically impacted the course of American history. He coordinated the legal defense of King and the other leaders of the Southern Christian Leadership Conference against the libel suits filed against them and The New York Times by the police commissioner and other city officials of Birmingham, Ala. The Supreme Court ruling in this case—Sullivan vs. The New York Times—resulted in the landmark decision on the current law of libel. In April 1963, he drafted the settlement agreement between the City of Birmingham and Martin Luther King Jr. to bring about the end of demonstrations and the desegregation of department stores and public accommodations. He assisted King in the drafting of his celebrated “I Have a Dream” speech, which he delivered at the March on Washington, August 28, 1963. In September 1971, Jones again found himself at the center of history when, at the request of Governor Nelson A. Rockefeller, he was requested to help negotiate an end to the historic Attica prison inmate rebellion.

A much-requested speaker, Jones has addressed audiences at corporations, law firms, universities, and book fairs in the United States and Europe. He has been recognized for his illustrious career with honors awarded by a wide variety of distinguished organizations, including Time magazine in 1972 as one of 100 Future Leaders of America, and a letter of commendation from President William J. Clinton for work in Birmingham on behalf of King and the civil rights movement. Jones has also served on the boards of the Impact Repertory Theater and Dance Company and the Theatre Development Fund, the Franklin and Eleanor Roosevelt Institute in Hyde Park, N.Y. He is on the boards of Evolve, the Andrew Goodman Foundation and Indika Alliance. He serves on the advisory board of the Communications Network, Inc.

In 2017, the Clarence B. Jones Institute for Social Advocacy was established as a nonprofit organization that invokes community, empowerment, compassion, and unity through social service, research, and education. The aim is to cultivate the importance of respecting and valuing each person regardless of race, religion, sexuality, sex, class, or ethnicity by serving others through educational programs, academic curriculum, and youth leadership development.

Jones holds a Bachelor of Arts degree from Columbia University as well as a Juris Doctor degree from Boston University’s School of Law, and a Certificate from the New York Institute of Finance and the NASD for his allied membership in the New York Stock Exchange. Additionally, he has an honorary doctorate in communications from Allegheny College in Allegheny, Pa., honorary doctorates of humane letters from Drew University, Madison, N.J., Lincoln University, Pa., and the University of San Francisco. As a young student, Jones studied clarinet at Juilliard’s summer high school program in 1946 and 1947.

Jones is co-author of What Would Martin Say? and Behind The Dream-The Making of the Speech That Transformed A Nation. He also co-authored an e-book, Uprising: Understanding Attica, Revolution and the Incarceration State. Jones posts a regular column in the Huffington Post. He is also writing a memoir called A Pencil and A Dollar Bill—Reflections During an Eight Decade African-American Journey to the Election of Barack Obama as President of the United States, and Beyond.

Located at Lincoln Center in New York City, Juilliard offers undergraduate and graduate degrees in dance, drama (acting and playwriting), and music (classical, jazz, historical performance, and vocal arts). Currently more than 800 artists from 40 states and 44 countries are enrolled at Juilliard, where they appear in more than 700 annual performances in the school’s five theaters; at Lincoln Center’s Alice Tully and David Geffen halls and at Carnegie Hall; as well as other venues around New York City, the country, and the world. Beyond its New York campus, Juilliard is defining new directions in global performing arts education for a range of learners and enthusiasts through The Tianjin Juilliard School and K-12 educational curricula. 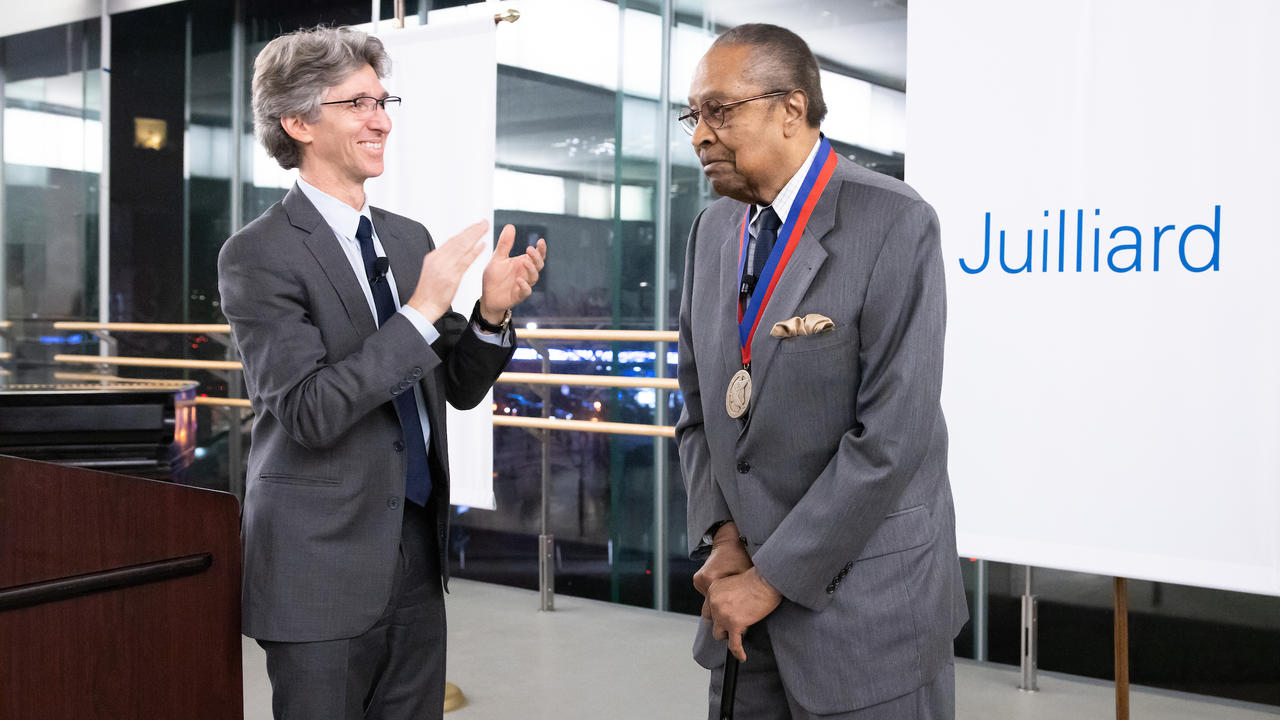