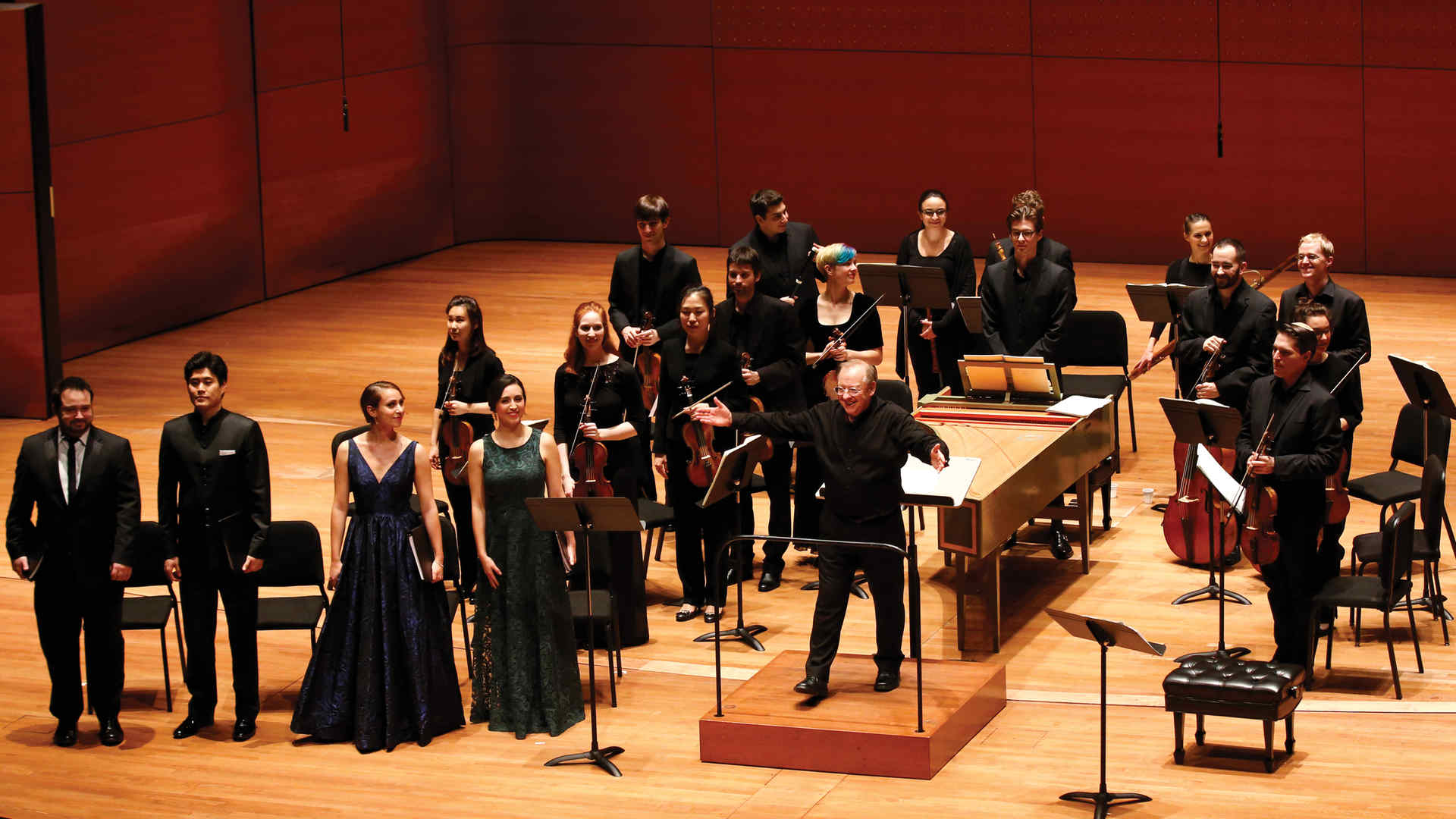 Juilliard415 and the Orchestra

A new year and decade: 2020 brings some major milestones for eminent conductor, harpsichordist, and flutist Nicholas McGegan. In January, he turned 70, and at the end of this season, he’ll conclude 35 years with his Bay Area-based Philharmonia Baroque Orchestra (PBO), of which he’s been music director since 1985.

He may be stepping down from the PBO, but “I’m not retiring!” McGegan clarified during a recent phone interview. He wants to spend more time “making music for as long as I can, rather than going to board meetings or fund-raising.” Which is to say, he’s happy to leave the responsibilities of administration behind to devote time to conducting orchestral concerts and operas. And his passion for teaching will continue to play a role as well—whether in giving special courses or acting as a guide on art-related tours.

The February 10 concert is also the first time the orchestra and Juilliard415 have performed on the same bill. “It can be quite easy in an institution—any institution—for all of the departments to work individually” and not to deviate from silo thinking, McGegan said. “So the opportunity for these cooperations is wonderful—in this case, a cooperation between a modern and a period-instrument orchestra.”

The February 10 program is structured around examples of 18th-century music and their reception in the early 20th century by Igor Stravinsky. In the first half, Juilliard415 will play Bach’s Brandenburg Concerto No. 3 and give the New York premiere of Sweet Pulcinella, 1749 Revision, an arrangement Ruiz made of the original source material that Stravinsky used for his landmark neoclassical ballet score Pulcinella (1920). The Juilliard Orchestra will take the stage in the second half for the Pulcinella Suite, extracted from the ballet, as well as “Dumbarton Oaks” (1937–38), another neoclassical gem, which Stravinsky modeled after the Brandenburg Concertos.

“We are a long way from the sort of rubbish that used to happen in the 1990s and what they called the ‘battle of the bands’ to see who gave the better performance—the early music group or the ‘standard’ one,” McGegan said. “This [joint bill] is going to be good fun, and I hope people will find it interesting as well.”

The conductor believes the program will also be illuminating for composition students. “A lot of the early music movement was not necessarily driven by performers but by composers,” he said. “Brahms was fascinated by Couperin, Webern by medieval music, and Britten by Purcell—when Purcell wasn’t yet a household name. Composers have inquiring minds and are often the ones doing the musicological research, which then goes to performers.”

At the same time, Stravinsky’s approach to early music was a far cry from contemporary understandings of it. Indeed, most of the material he drew on for Pulcinella was at the time mistakenly attributed to Giovanni Pergolesi. McGegan likens such pioneering, historical efforts to bring early music to life in a modern context to “colorizing a movie—only not with the colors that Juilliard415 would use.” The juxtaposition also underscores McGegan’s longstanding advocacy for early music as a creative source for new music and for collaborations between period instrument musicians and contemporary composers.

The Lady Gagas of Their Day

Meanwhile, McGegan’s February 17 account of Rinaldo with Juilliard415 and a cast of Juilliard singers offers New York audiences a not-to-be-missed opportunity to experience his special passion for the music of Handel. Very loosely based on Torquato Tasso’s 16th-century Italian epic set in Jerusalem during the First Crusade, Rinaldo was the first Italian opera Handel introduced after settling for good in London, in 1712. The score borrows heavily from compositions Handel had produced before moving there. “Well over half of the arias have a life from other, earlier pieces,” McGegan said. “It was unusual for Handel to borrow to that extent, but his music wasn’t yet so well known in London. Later, generally speaking, all of his singers would have expected to have arias made just for them—haute couture and not off the rack.”

Rinaldo proved to be a hugely popular success despite some wicked drubbing by London critics. The score, according to McGegan, “sums up the best things Handel had in his portmanteau from his early years—from cantatas and other operas. And he tailored these to fit the cast.” The singers included such colorful figures as the Naples-born castrato Nicolò Grimaldi, who went by the stage name Nicolini, in the title role. The artists Handel worked with were “the greatest singers of the time—the Lady Gagas of their day,” McGegan said. “People were fascinated by who they were dating, what they had for breakfast.” Sex scandals abounded, too, as reported obsessively in contemporary tabloids and by cultural commentators.

The format of Rinaldo, typically for this era of Baroque opera, revolves around a chain of solo arias in which the action comes to a standstill, and the musical material gets repeated with varying degrees of ornamentation to set it apart the second time around. That should hardly seem alien, McGegan observed. “It’s not so different from listening to a number in a Broadway musical. You have a star singer who begins in character, but as she goes through the piece, you start to concentrate on her as a performer, as she steps outside the picture frame to comment. So as you get into the aria, you also become amazed by the singer’s capabilities. And then she walks back into the story for the recitative.”

McGegan and Juilliard415 will take Rinaldo on the road this spring; the ensemble will make its Göttingen International Handel Festival debut on May 30, and will give a subsequent performance on June 2 in Groningen, the Netherlands.