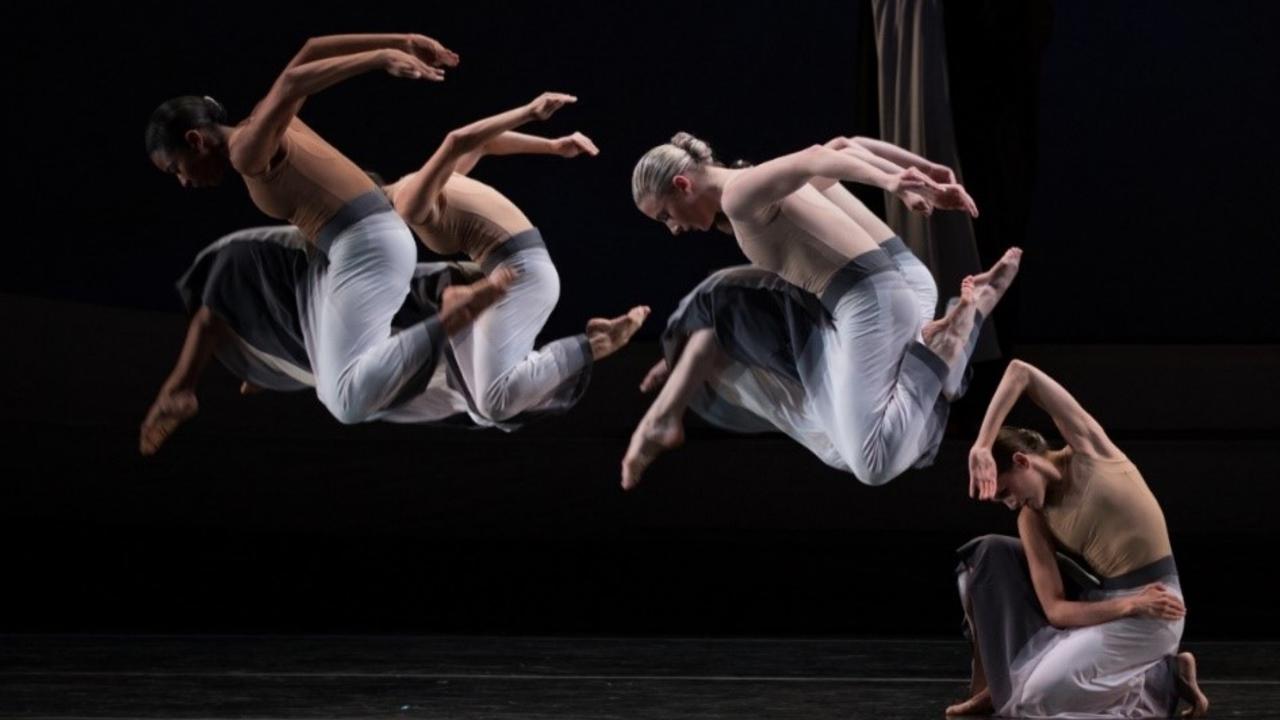 Please note that this event has been canceled due to COVID-19. Please visit Juilliard’s COVI9-19 Response page for more details.

Tickets for Juilliard Spring Dances at $30 ($15 for full-time students with a valid ID) are available at juilliard.edu/calendar.

Trisha Brown’s Set and Reset/Reset (2020), based on her Set and Reset (1983), is set to Laurie Anderson’s Long Time No See. Set and Reset/Reset offers student dancers comprehensive training in the movement aesthetic, choreographic process, and performance fundamentals of post-modern choreographer Trisha Brown. The work is created with the students and design collaborators using the material and ideas from the original; Juilliard’s version, which will be staged by Stacy Spence with Leah Morrison, will feature costumes by Luke Simcock (based on Robert Rauschenberg’s 1983 original designs), lighting by Clifton Taylor (based on Rauschenberg and Beverly Emmons’ original designs), and visual presentation, also by Clifton Taylor (based on Rauschenberg’s original designs). Set and Reset had its world premiere at the Festival d’Avignon in La Chartreuse, France, in 1983; the New York premiere took place at BAM’s Next Wave Festival in 1983.

Former Juilliard faculty member Donald McKayle’s Rainbow ’Round My Shoulder (1959), a searing dramatic narrative, is set on a chain gang in the American south where prisoners work, breaking rock from ‘can see to can’t see.’ Their aspirations for freedom come in the guise of a woman, first as a vision and then as a remembered sweetheart, mother, and wife. The songs that accompany their arduous labor are rich in polyphony and tell a bitter, sardonic, and tragic story. The work was created for the Donald McKayle Dance Company and has been performed by Alvin Ailey Dance Theater, Batsheva Dance Company, and Dayton Contemporary Dance, among others. The work will be staged by Les Watanabe with assistance from faculty member Renée Robinson and Bret Yamanaka. The music will be performed live by Michael McElroy and the Broadway Inspirational Voices.

Juilliard alumnus Paul Taylor’s Promethean Fire (2002) is set to three keyboard works by J.S. Bach orchestrated by Leopold Stokowski. The music will be performed live by the Juilliard Orchestra, led by Juilliard alumna Elinor Rufeizen. The work will be staged by Michael Trusnovec with assistance from faculty member Linda Kent and Lisa Viola—all three were Paul Taylor dancers. Promethean Fire examines a kaleidoscope of emotional colors in the human condition. The 16 dancers weave in and out of intricate patterns that mirror the way varied emotions weave themselves through life. A central duet depicts conflict and resolution following a cataclysmic event. But if destruction has been at the root of this dance, renewal of the spirit is its overriding message.

About the Choreographers
One of the most influential choreographers and dancers of her time, Trisha Brown’s (1936-2017) groundbreaking work changed the landscape of art. With the founding of the Trisha Brown Dance Company in 1970, Brown set off on her own path of artistic investigation and ceaseless experimentation. The creator of more than 100 choreographies and six operas as well as a graphic artist, whose drawings are in numerous exhibitions and collections, Brown in her earliest works took impetus from the cityscape of Lower Manhattan’s SoHo neighborhood. In the 1970s, as she strove to invent an abstract movement language—one of her singular achievements—it was art galleries, museums and international exhibitions that provided her work its most important presentation context. A major turning point in Brown’s career came in 1979, when she transitioned from working in non-traditional and art world settings to assume the role of a choreographer working within the institutional framework associated with dancing—the proscenium stage.

Brown was the recipient of nearly every award available to contemporary choreographers. The first woman to receive the coveted MacArthur “genius grant” (in 1991), Brown was honored by five fellowships from the National Endowment for the Arts; two John Simon Guggenheim Fellowships; and Brandeis University’s Creative Arts Medal in Dance (1982). In 1988, she was named Chevalier dans l’Ordre des Arts et Lettres by the government of France In 1999, she received the New York State Governor’s Arts Award and, in 2003, was honored with the National Medal of Arts. She has received numerous honorary doctorates, is an honorary member of the American Academy of Arts and Letters, and was awarded the 2011 New York Dance and Performance “Bessie” Lifetime Achievement Award. Also in 2011, Brown received the prestigious Dorothy and Lillian Gish Prize for making an “outstanding contribution to the beauty of the world and to mankind’s enjoyment and understanding of life.”

Donald McKayle (1930-2018) was a longtime professor at the University of California at Irvine (UCI), served as choreographer/teacher, founder and artistic director of the UCI Etude Ensemble, and was a mentor to his most beloved students. He was a member of Juilliard’s dance faculty from 1957 to 1964 and received an honorary degree from the school in 2009. McKayle was named by the Dance Heritage Coalition as “one of America’s irreplaceable dance treasures: the first 100.” He choreographed more than 100 works for dance companies and more than 250 concert works and television, film, and theater works throughout the world. Among the many awards he has earned were five Tony nominations and Tony awards on Broadway. He received an Emmy nomination for the TV special, Free to Be You and Me, and has received the Los Angeles Drama-Logue Award, a Golden Eagle Award, UCI’s Distinguished Faculty Lectureship Award for Research, and the UCI Medal, the highest honor given by UCI.

His last work, Crossing the Rubicon: Passing the Point of No Return, premiered in 2017. In the work, McKayle digs deeply into the suffering and tragedy of millions of migrants around the world. In 2018, McKayle was honored at the 31st annual International Association of Blacks in Dance: performances of his works received a 15-minute standing ovation and he spoke to the audience. McKayle’s autobiography, Transcending Boundaries: My Dancing Life, is published by Routledge. A television documentary of his life and work, Heartbeats of a Dance Maker, aired on PBS.

Juilliard alumnus Paul Taylor (1930-2018), one of the most accomplished artists this nation has ever produced, helped shape and define America’s homegrown art of modern dance from the earliest days of his career as a choreographer in 1954 until his death. Having performed with Martha Graham’s company for several years, Taylor uniquely bridged the legendary founders of modern dance—Isadora Duncan, Ruth St. Denis, Ted Shawn, Doris Humphrey, and Graham—and the dance makers of the 21st century with whom he worked. Through his initiative at Lincoln Center begun in 2015, Paul Taylor American Modern Dance, he presented great modern works of the past and outstanding works by today’s leading choreographers alongside his own vast repertoire. He also commissioned the next generation of dance makers to work with his renowned troupe, the Paul Taylor Dance Company, thereby helping to ensure the future of the art form. Taylor continued to win public and critical acclaim for the vibrancy, relevance, and power of his dances into his 80s, offering cogent observations on life’s complexities while tackling some of society’s thorniest issues. His repertoire of 147 works covers a breathtaking range of topics, but recurring themes include the natural world and man’s place within it; love and sexuality in all gender combinations; and iconic moments in American history. While some of his dances have been termed “dark” and others “light,” the majority of his works are dualistic, mixing elements of both extremes. Taylor left an extraordinary legacy of creativity and vision not only to American modern dance but to the performing arts the world over.

About Alicia Graf Mack, Director of Juilliard Dance
Alicia Graf Mack enjoyed a distinguished career as a leading dancer of Alvin Ailey American Dance Theater. She has also been a principal dancer with Dance Theatre of Harlem and Complexions Contemporary Ballet, and she has danced as a guest performer with Alonzo King’s LINES Ballet, Beyoncé, John Legend, Andre 3000, and Alicia Keys. Graf Mack graduated magna cum laude with honors in history from Columbia University and holds an MA in nonprofit management from Washington University in St. Louis. In 2007, Smithsonian magazine named her an American Innovator of the Arts and Sciences. She is a recipient of the Columbia University Medal of Excellence, an annual award given to an alumnus who has demonstrated excellence in their field of work. In 2008, she delivered the keynote address to the graduates of Columbia University’s School of General Studies. As a dance educator, Graf Mack most recently taught as an adjunct faculty member at the University of Houston and was a visiting assistant professor at Webster University. She is a co-founder of D(n)A Arts Collective, an initiative created to enrich the lives of young dancers through master classes and intensives. She began her inaugural season as director of the Juilliard Dance Division in fall 2018.

About Juilliard Dance
Under the direction of Alicia Graf Mack, Juilliard Dance develops artists of the 21st century – trained in ballet, modern, and contemporary dance forms. Established in 1951 by William Schuman during his tenure as president of Juilliard, with the guidance of founding division director Martha Hill, Juilliard became the first major teaching institution to combine equal instruction in both contemporary and ballet techniques.

In the four-year dance program—leading to a bachelor of fine arts degree—students learn the great traditions of both past and present. Juilliard dancers enjoy unparalleled opportunities to work with today’s leading choreographers and perform both new and existing repertory. In addition to high caliber technical training and performances, dancers learn about the craft of choreography and immerse themselves in other facets of the field. Located at Lincoln Center in New York City, Juilliard prepares dancers for all the possibilities that lie ahead.

The Juilliard Dance Division, proud recipient of the 2015 Capezio Award, was the first educational institution to receive the honor.

Tickets for Juilliard Spring Dances at $30 ($15 for full-time students with a valid ID) are available at juilliard.edu/calendar.

A sampling of works curated from workshops and performances by Juilliard Dance Division students throughout the year. Tickets at $10 are required and available at juilliard.edu/calendar.

Juilliard Dance’s class of 2020 presents a diverse program of existing repertory and new works created by commissioned choreographers. Tickets at $20 are available at juilliard.edu/calendar.