Lessons Learned at a Jazz Competition 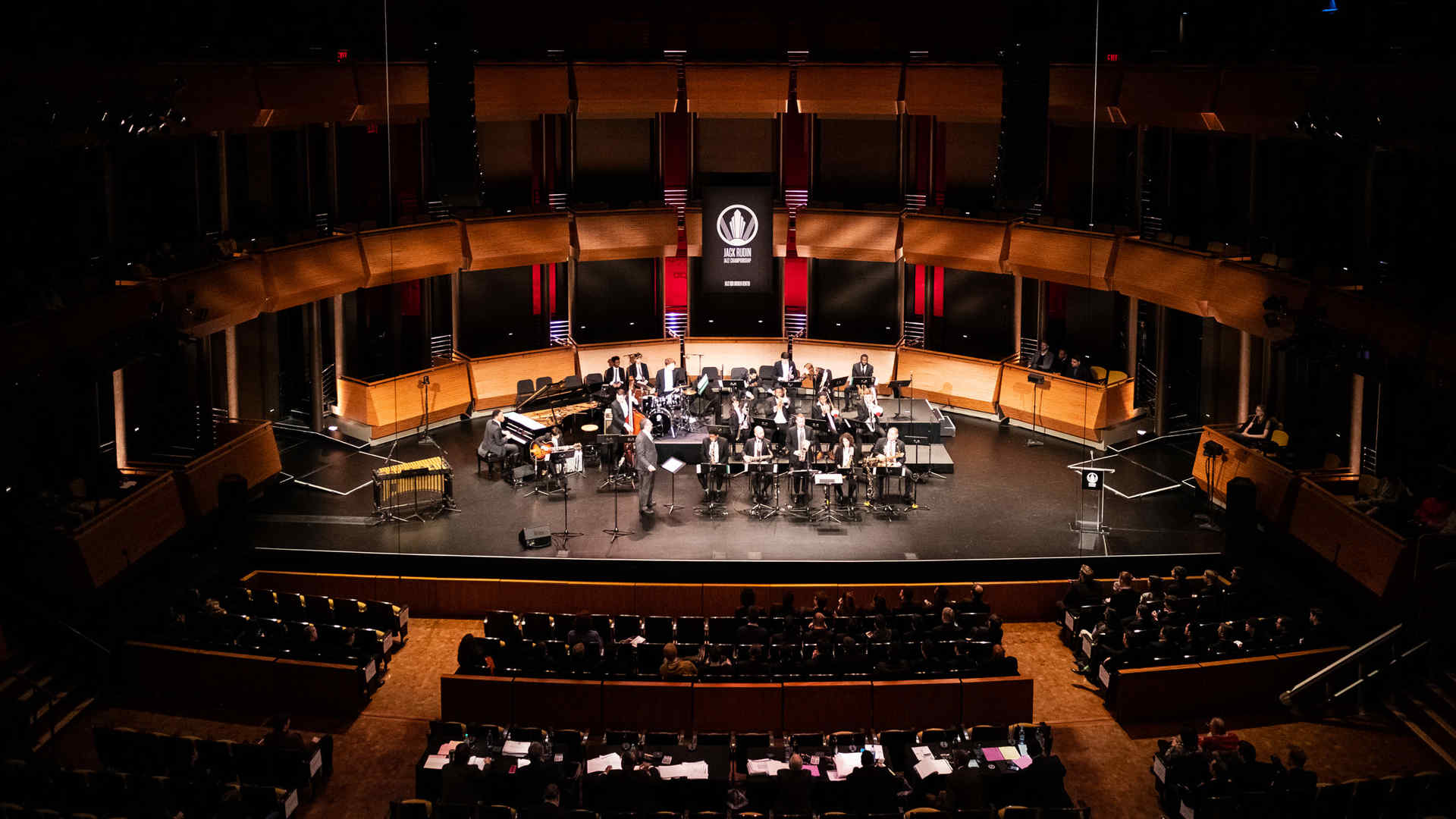 The Juilliard Jazz Orchestra competed in the the Rudin Jazz Championship, held at Jazz at Lincoln Center's Rose Hall

In January, not long after winter break ended, the Juilliard Jazz Orchestra did something we don’t usually do. We competed in a national collegiate big band festival and competition—Jack Rudin Jazz Championship—at Jazz at Lincoln Center with nine other schools from across the U.S. We didn’t win the competition, but that’s not important. Instead of a band trophy, we received a healthy dose of humility, a greater appreciation for our colleagues from across the country, and a unique opportunity to learn from and collaborate with hundreds of like-minded students.

Leading up to the competition, things didn’t seem too out of the ordinary for us. Two three-hour rehearsals per week remained the status quo, unlike some of our competitors who were burning the midnight oil over winter break. We remained confident that if we took care of business and performed how we usually do, we would succeed in the competition. After all, this is Juilliard, right? Don’t get me wrong, we certainly weren’t underestimating our competition. In my three years of being a Juilliard Jazz student, I’ve come to notice that my peers are some of the most down-to-earth, hard-working, kind people you could ever meet. But the Juilliard Jazz program is full of working New York professionals, and the competition was on our home turf, Rose Hall at 60th and Broadway. It all felt very close to home, very familiar. It felt like it was our competition to lose, and we were right.

We arrived that Sunday morning ready to perform, albeit a little frazzled from a water-main break that affected train service from Harlem, where many of us live. We were able to listen to the first few bands perform before we got ready to warm up, and everyone seemed to have brought their A game. As we left for the warm-up room, we heard Manhattan School of Music, the only other New York City-based school, and they sounded incredible. But we had our own show to put on. We waited backstage after a brief run-through of one of the songs. No one was nervous, really. Half of our band had subbed with the Jazz at Lincoln Center Orchestra on that same stage at some point, so we really did feel the home-field advantage. When our time came, we walked out there and gave what we all thought was a solid performance. We played “Afro Bossa” by Duke Ellington, “Leap Froggin’” by freshman trumpeter Summer Camargo, and “Resolution” by John Coltrane, arranged by Wynton Marsalis (’81, trumpet), director of Juilliard Jazz. We played well—or so we thought.

During our lunch break, we received many compliments from other students and staff, and we were able to catch up with students from other schools that we hadn’t seen in far too long. It felt like a reunion of sorts, seeing people from high school summer camps who had wound up at other schools. We made new friends, too. Some of us had been at Dizzy’s the night before, listening to and networking with students from the other schools at the jam session. Competition aside, this entire event was a unique way in which we could listen to, interact with, and support each other. There was a vibrant sense of community that nearly everyone felt. It was special.

Lunch ended and we listened to the final five bands. They played their behinds off, to no one’s surprise. The judges broke for deliberation and came back half an hour later. They announced that since all of the bands played so well, they were expanding the top three to a top four. We figured after a solid performance that, “Hey, we’ll totally make the top four, right?” Not quite. We didn’t even place. I’d say we were disappointed, but that wouldn’t quite describe it. We were more confused than anything else. We played well, so what went wrong? We spent the next couple of hours asking ourselves, “What gives?”

The top four bands gave a final performance, the Jazz at Lincoln Center Orchestra played, the judges deliberated again, and the winners were crowned. Temple University, Indiana University, and Michigan State University were the top three. The winning bands all sounded incredible. We were happy for them though we were still confused. We found out later that we didn’t quite live up to the judges’ expectations of us. We didn’t showcase our strong soloists well enough, our balance was a little bit off, and we did a pretty mediocre job on Wynton’s arrangement of “Resolution,” according to Wynton himself. We played well, but just not well enough.

Like I said, we didn’t win, but that’s not the important part, though it felt like it at the time. In hindsight, it was the experience that was most fulfilling. Hearing the alto saxophonist from North Carolina who sounded just like Johnny Hodges, the clarinetist from Indiana who brought the house down twice, and seeing the students who had been working toward this competition for months jump for joy in their seats—those were the important parts. It gave us perspective. It made us just a bit more humble. It helped us understand that there are thousands of students out there with the same goals that we have, and that’s a good thing. Maybe this year they were a little hungrier than we were. So, maybe next year we’ll have to come ready to feast.