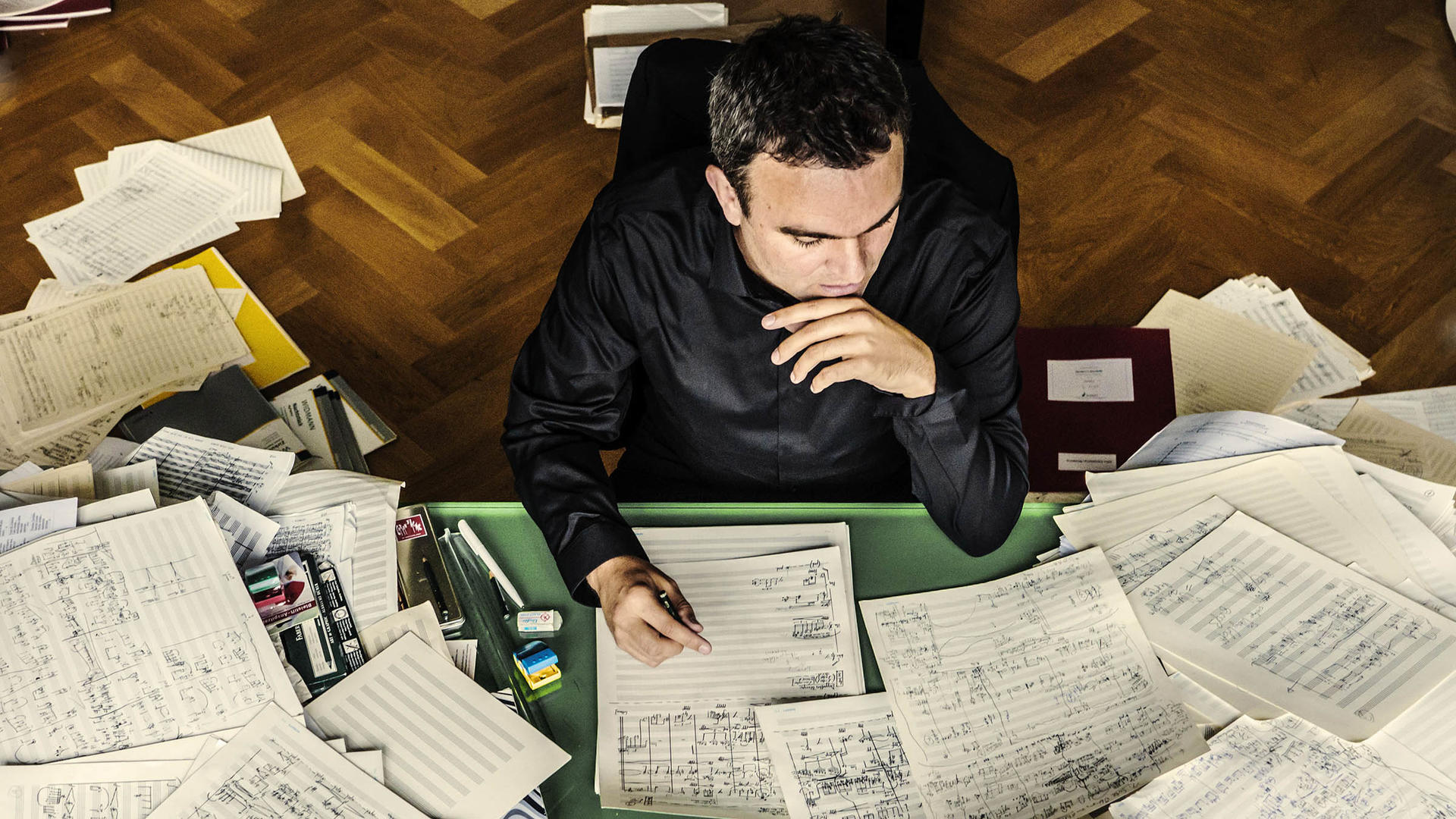 Which Jörg Widmann (Advanced Certificate ’95, clarinet) would you like to meet? The prolific artist who appears on Bachtrack.com’s list of the top 10 most frequently performed living composers for 2019 (alongside figures like Philip Glass and John Adams)? The virtuoso clarinetist who has inspired numerous new compositions? The conductor of major international orchestras? The erudite lecturer? The teacher and mentor of young musicians?

“The year I spent as a student at Juilliard was such an important one for me,” the 46-year-old Widmann recalled in a recent phone conversation. “I hardly composed a note, but that time changed my perception of life, of the world, and of myself a lot.” A quarter century on from when he performed within its ranks, Widmann is coming back to spend time with the Juilliard Orchestra—he’ll conduct its March 27 concert as part of his yearlong residency at Carnegie Hall. As part of the residency, this multifaceted artist’s compositions are being featured on programs by several orchestras and ensembles; the residency also includes engagements conducting and playing clarinet and a series of lectures reflecting on his relationship to the musical past.

Widmann has long since found a way to balance the demands of such versatility while producing new works across the spectrum, from pathbreaking string quartets and ingenious orchestral pieces to his ambitious, polystylistic opera Babylon (which he revised for the Berlin Staatsoper last season). Yet one new component of the residency is the opportunity to reconnect with the institution that left such a significant mark on him as a student. “It means a lot for me to work with the Juilliard Orchestra,” he says. “I have so many memories of playing in it. And we have a tough but beautiful program to play.”

One item Widmann programmed for the concert—Mendelssohn’s Hebrides Overture—was the first piece he played in the Juilliard Orchestra, in 1994. “I love that music, but I also wanted to include it because I am almost sentimental about it for that reason.” By the time he arrived at Juilliard, Widmann had studied clarinet for over a decade in his native Munich. Enchanted by the joy of improvising on his instrument, he was soon bitten by the composition bug as well, starting formal training at 11. (Hans Werner Henze and Wolfgang Rihm were among his composition mentors.)

At Juilliard, Widmann continued his clarinet studies with Charles Neidich (faculty 1989–present) and took classes with David Diamond (faculty 1973–97) that were an important inspiration for his later compositional thinking.Diamond was “a wonderful teacher and opened the doors to masterworks of the 20th century for me in a way I had never understood before,” he said.

Widmann’s conducting career is the most recently developed of these tracks. He made his podium debut in 2009 leading a theatrical piece he wrote with the artist Anselm Kiefer for the Opéra Bastille in Paris, Am Anfang (In the Beginning). But Widmann refuses to regard these various activities as separate silos—composing and performing (whether with the baton or on clarinet) are merely different modes of musicianship.

Take this month’s Juilliard Orchestra concert. Widmann becomes particularly animated when he describes “composing” this program. Along with the Mendelssohn, it includes Mozart’s “Jupiter” Symphony as well as two of Widmann’s own pieces: Con brio and his Violin Concerto No. 2, which will receive its U.S. premiere with doctoral candidate Stella Chen (’11, violin). He explains, “I love to program like this because I believe that when you listen to a contemporary piece next to a work like the ‘Jupiter,’ you notice the dissonances and modernism of the Mozart in a different way. There are cross-references and links that go both ways—between the past and the present—and you can listen and question things that you assumed. I believe in the context very much: The old masterworks still have so much to tell us.”

A key aspect of Widmann’s aesthetic as a composer is influenced by his responses to the legacy of the Classical and Romantic eras. Con brio, for example, originated more than a decade ago as a series of commissions by Mariss Jansons for new works to pair with a Beethoven symphony cycle. “He asked me to imagine writing an overture for the same scoring as the Seventh and Eighth Symphonies,” Widmann explains. “Considering the noise Beethoven makes in those works with such small forces, it was an interesting challenge. So I wrote a Beethoven reflection that is also a hidden timpani concerto. Maybe we should warn the timpani player that this part is insane!”

Familiar as the Mozart and Mendelssohn pieces are, the Juilliard Orchestra players will be rehearsing them with a musician who treats them as contemporary works, taking nothing for granted. “Mendelssohn’s Hebrides is such a piece of perfection. He creates such a modern atmosphere in his sound,” Widmann says. “And the end of this overture is so unlike the loud and fast ending of most overtures. The idea of ending it with a lonely flute and then this last, soft pizzicato is incredible. After the storm, it’s the loneliest and scariest and most mysterious moment you can imagine.” Similarly, Widmann finds the fugal finale of the “Jupiter” endlessly inspiring because Mozart finds a balance “between this incredible freedom and the counterpoint that is so strict at the same time. Every time I hear it, I can’t believe it.”

Widmann’s Violin Concerto No. 2 revolves around a vast central movement titled “Romanze”—“a deeply emotional piece that is about singing and, I would even say, about love”—which showcases his ingenuity of invention as an explorer of sound colors. Widmann wrote the concerto originally for his sister, violinist Carolin Widmann, who premiered it in Tokyo’s Suntory Hall in 2018. “It’s a very difficult piece, and I have the greatest admiration for [Juilliard’s] Stella for learning it,” he says. “I wanted to bring something that had not been heard in the U.S. before—and something that represents how I am writing today.”

“I look forward to this program and particularly to working with the students of Juilliard,” Widmann says, noting that he hasn’t been back since studying here. “It feels like coming home musically.”

This concert has been postponed