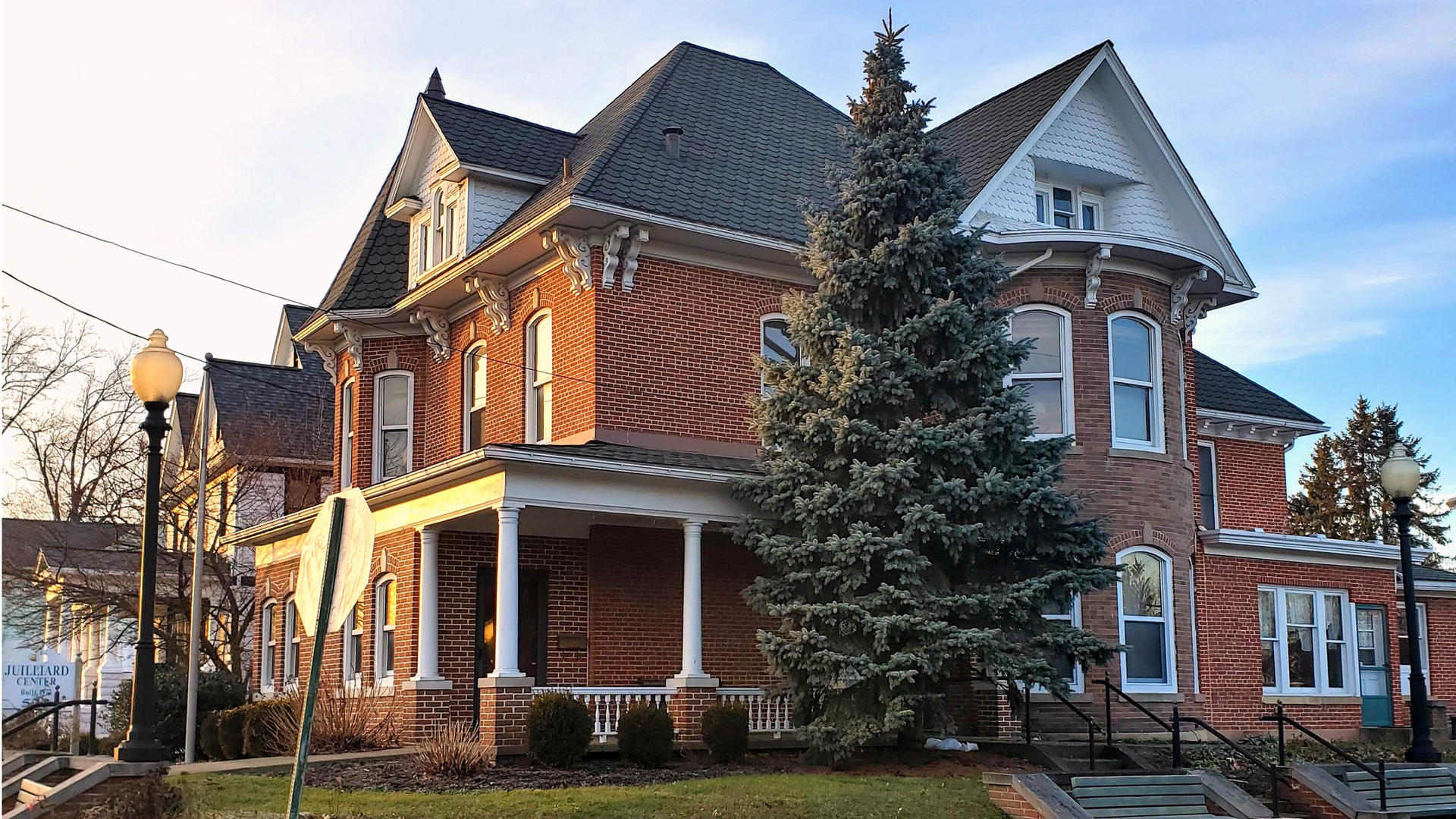 The Juilliard Arts Center in Louisville, Ohio, was once the home of a brother of Juilliard’s namesake

For Gregory Fiocca (BM ’82, MM ’83, cello) growing up in Akron, Ohio, the name Juilliard was synonymous with New York City—and it was the place he was determined to study cello. It wasn’t until a chance conversation with his boss nearly four decades later that he discovered a Juilliard connection much closer to home.

By Gregory Fiocca
The sun had melted the frost that settled on the remnants of a field of dent corn, harvested weeks earlier. This is rural Stark County, Ohio, and the field is just north of the Biery Cheese Company, where I’m the information systems manager. Recently the company owner asked if I knew of a beautifully preserved Victorian-era home five miles from the plant, in Louisville, Ohio. Turns out, it had been the home of Charles Louis Juilliard, a brother of Augustus D. Juilliard (1836–1919), whose bequest was one of the driving forces (with some twists and turns along the way) behind the establishment of The Juilliard School. For the last nine years, the house has been the Juilliard Arts Center, honoring its historic significance not only to the arts community but also the region. But while many locals are familiar with the Juilliard name, outside these rolling hills and picturesque farms, few people know about the Ohio-Juilliard relationship that germinated in Stark County Ohio 183 years earlier.

Not long after that conversation, I stopped at Union Cemetery, the final resting place of local citizens of various church denominations. I’ve always been fascinated by cemeteries and their rich histories, and as I maneuvered my Jeep Wrangler over the limestone tracks that segment the sections, I came across the gravestones of nearly a dozen of Augustus D. Juilliard’s relatives. Intrigued, I started to piece together the journey of Augustus Juilliard’s family over the years.

Augustus’ grandfather, a French soldier under Napoleon Bonaparte, was killed in the battle of Verona in 1796. Forty years later, his son Jean and his wife Annetta boarded a ship for America; their fifth child, Augustus, was born while they were still at sea. In the mid-1800s, many French families settled in Ohio and the Juilliards joined them. While Jean Juilliard had been a shoemaker in France, in Ohio, he turned to farming—and changed his name to John.

So how did the life of this son of French immigrants from Burgundy, who grew up in rural Ohio, evolve into the incredible story that is the Juilliard School? Although the family owned the first piano in their town and Augustus Juilliard would serve as president of the Metropolitan Opera for almost three decades, we don’t even know if he played any instruments.

Augustus had many interests growing up. Farming was not one of them, and so he followed his older brother Charles Louis into the dry goods business. Dry goods stores were essentially general stores, the predecessor to the modern-day department store; they sold textiles and ready-made clothing, nails, tools, tobacco, flour, sugar, and coffee beans—pretty much anything that didn’t contain liquid. Augustus also began learning about the textile industry, and before long began making regular business trips to New York to evaluate and purchase textiles, developing many friendships and industry contacts. It was these trips that set the stage for his move, at age 30, to New York City, where he eventually amassed enough knowledge and experience to form the A.D. Juilliard Company, which became one of the leading textile wholesalers in the U.S. A few years later, in 1877, Augustus married Helen Marcellus Cossitt—whose father had also made his fortune in dry goods—and he became an industry titan, with board appointments in banking, railroads, and insurance; his philanthropy spanned multiple industries and causes.

Augustus and Helen had no children, so after he died from pneumonia, in 1919, it fell to his nephew to handle his $20 million estate, $13 million ($167 million in 2020 dollars) of which was to go toward the advancement of the musical arts and education. In 1920, the estate established the Juilliard Musical Foundation, and four years later, the Juilliard Graduate School was formed with the goal of training music students at the highest level.

Meanwhile, Frank Damrosch, a highly respected conductor and music educator, had embarked on a mission to create a model music school for American students so they would no longer have to travel to the European conservatories for advanced music education and performance study, founding the Institute of Musical Art (IMA) in 1905 with the backing of financier James Loeb.

While I was unable to determine any direct relationship between Frank Damrosch and Augustus D. Juilliard, they shared a similar dream for the establishment of an American music education institution of the highest caliber, one that would rival the finest music schools in Europe and England. Decades after leaving Ohio, and five years after his death, Augustus D. Juilliard and his passion for music and opera delivered one of the largest musical arts bequests in American history. The resulting gold standard is today’s Juilliard School.