I Have Found Myself at the Beginning | Student Blog 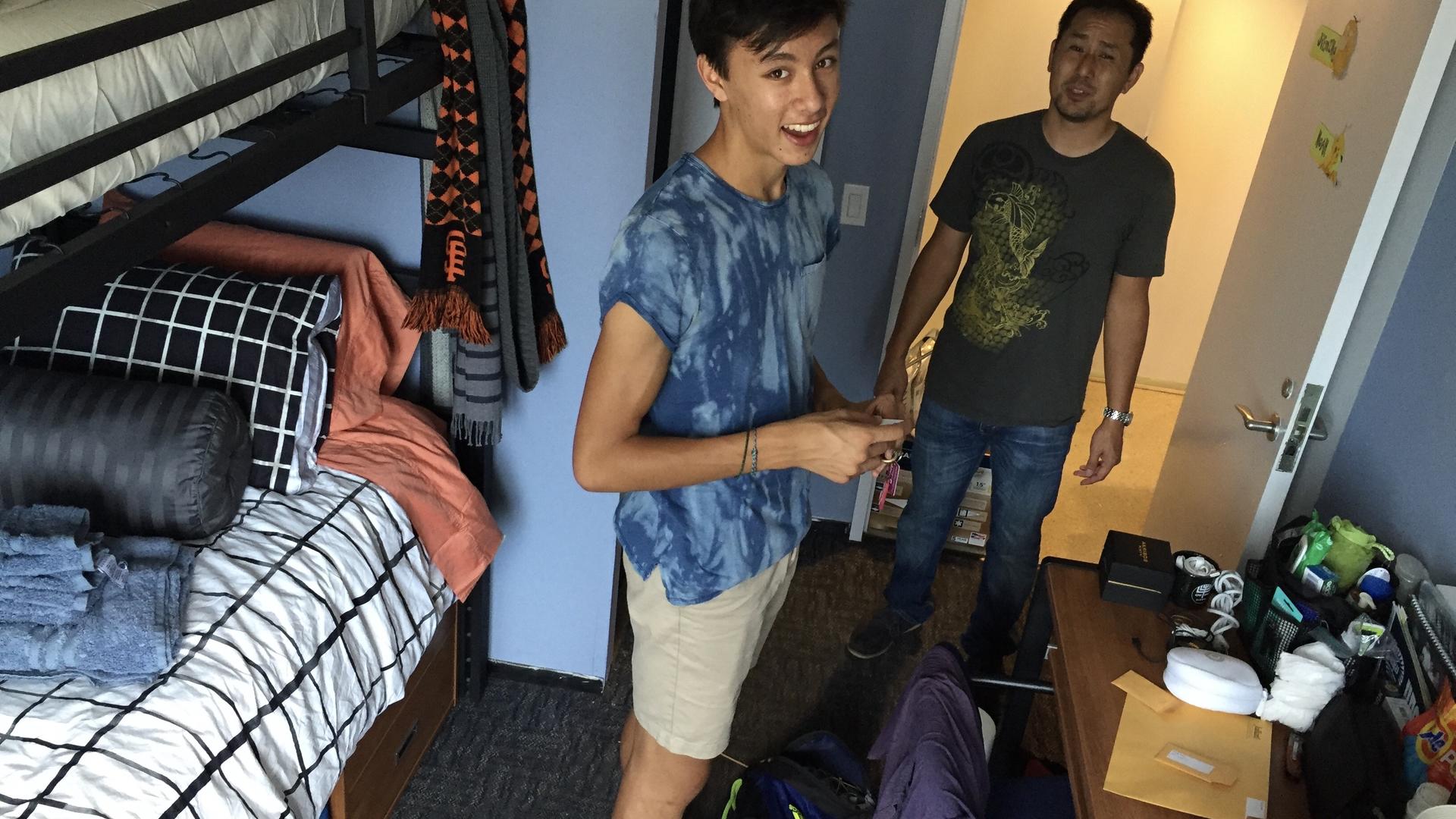 This picture was taken on my first day as a Juilliard student.

When I look at it, I am blown back in time, to a beginning—one full of bubbling excitement, aspirations for the future, a fresh outlook on the world. As a young adult, it felt as if I had reached a pinnacle, the peak of my dreams. The sky was unbelievably clear on that late-August afternoon in New York. Sunlight struck the sidewalk tiles on 65th Street with such intensity that they almost glowed, even in their palish grey mundanity. The surrounding air was filled with the dense humid scent of urban dirt, gasoline, and halal [food trucks]. I remember feeling the atmosphere simmer with an intensity that was not there on a regular day. It was a magical introduction to my four years at Juilliard. But beginnings, as I have learned, are hardly ever that simple. 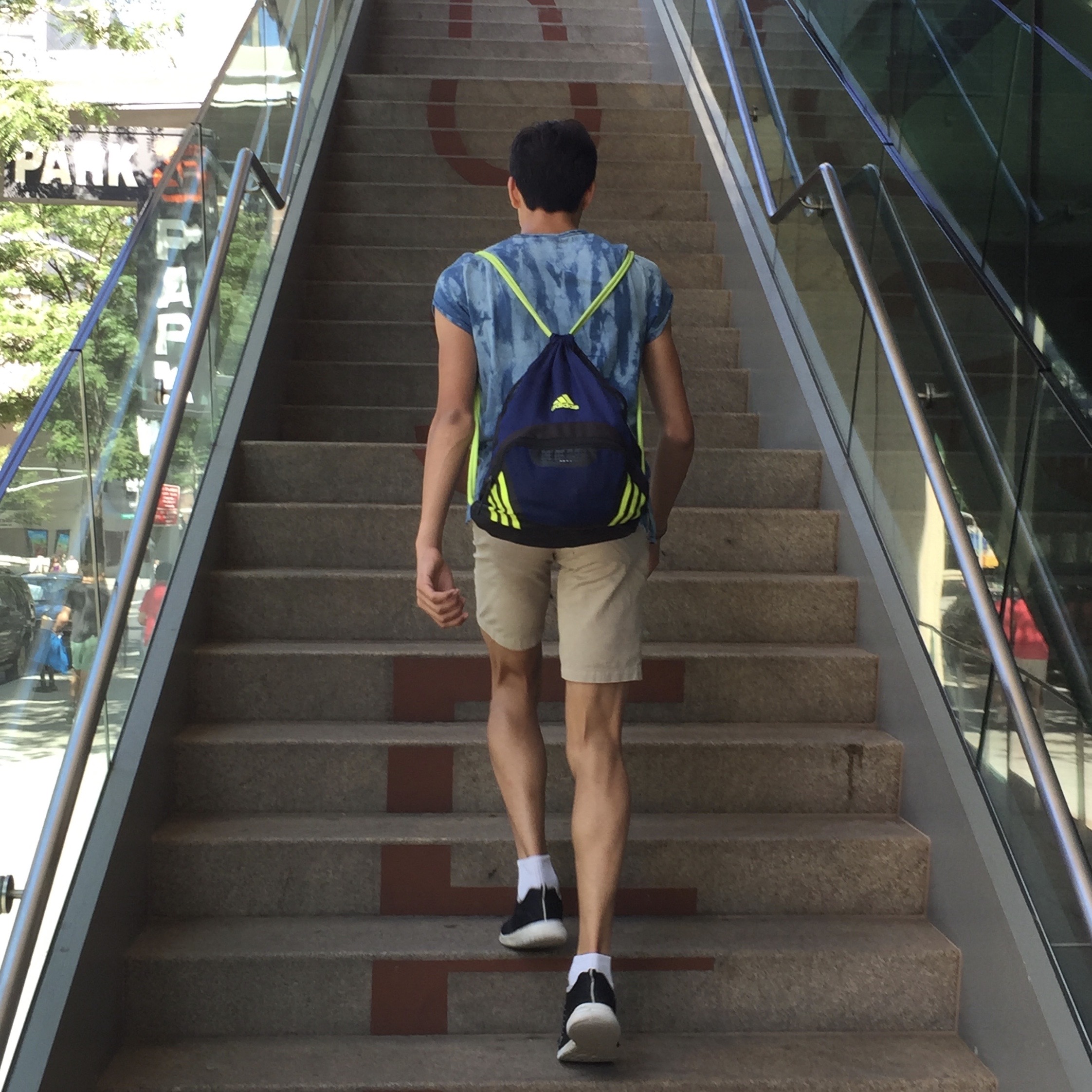 About a week later, I remember sitting on the floor of the empty A-room in my dormitory suite, which had yet to be occupied by returning students, sobbing on the phone to my parents. The air, which had felt so open and full before, had become stale and empty, laying heavy on my hunched shoulders. These sobs were tangled up in many complicated emotions, some of which I had not expected to feel so deeply: confusion, sadness, fear, loneliness, frustration, homesickness—and those were just the ones that I could identify. I remember feeling a world apart from my family back in California, uprooted from everything that gave me comfort and security, alone and frozen in a city full of moving faces. I don’t remember the exact words I said to them, but it was along the lines of “I don’t deserve to be here,” or “I’m way in over my head,” or “this was all a mistake.” However, I will never forget their exact response: “They told us you would say that.”

By “they,” my parents meant the Juilliard orientation staff and faculty. During the several parent-guardian meetings they attended—about the school, adjusting to college life, etc.—one message in particular was emphasized. They were warned that their new student (me) may doubt themself, question their (my) place in this program, feel isolated from the community, and that it was their job to reassure me that I was anything but an admissions error. When my parents relayed this back to me, the whirlwind of panic in my head began to subside. The hyperbolic conclusions I had jumped to gradually shrunk down to surmountable challenges. I was not an incompetent artist, but one who had the potential to grow. Moving to New York wasn’t a mistake, but the start of an adventure, undeniably marked with hurdles. Most importantly, although I was becoming independent, I was far from alone. 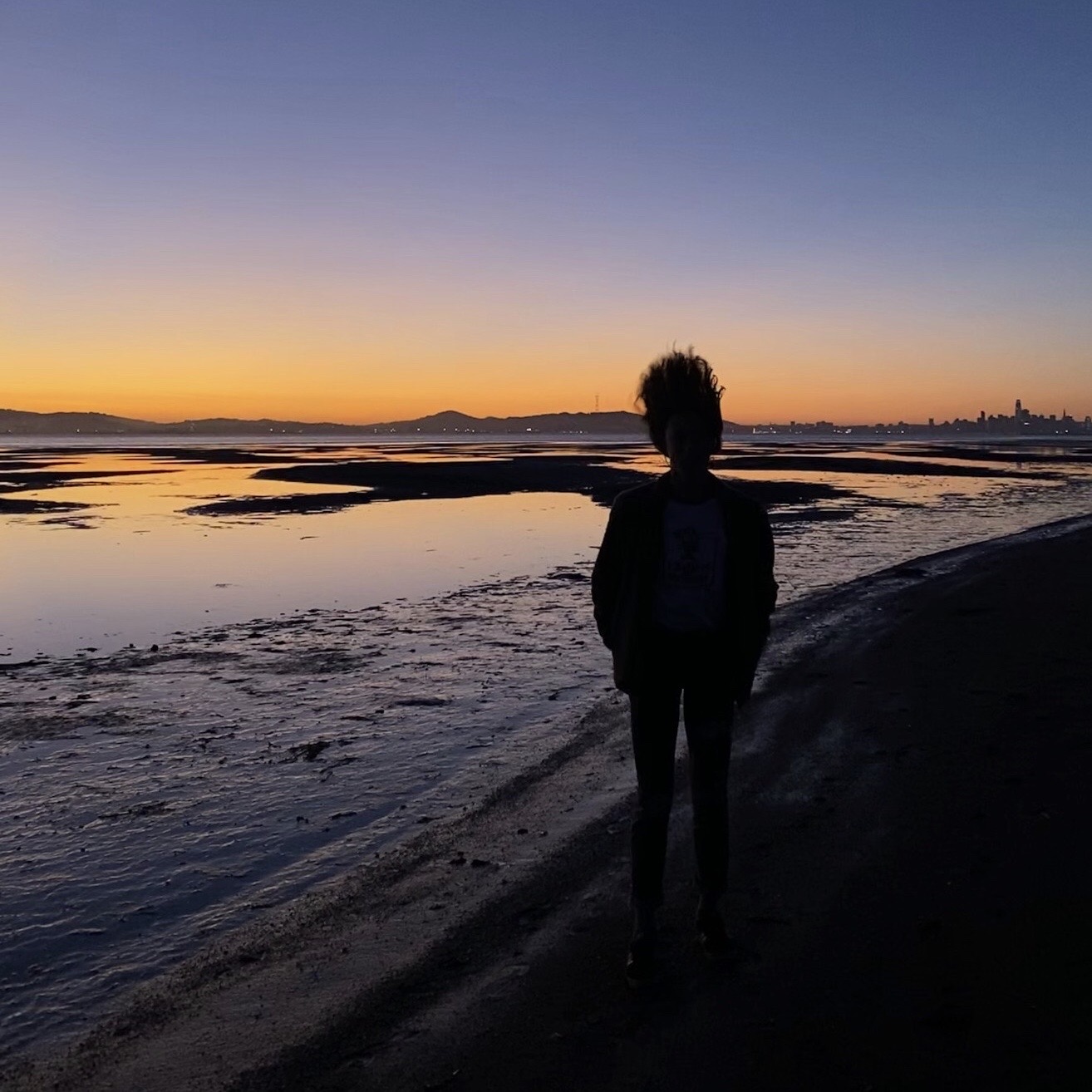 Hundreds of other young artists, including 23 other dancers, were entering this same terrifying adventure. Over the next four years, my classmates and I evolved from a class, into friends, into a team, then ultimately, into a family. They were the ones who taught me what it means to let go of self-imposed barriers and to submit to the process of growth. They helped me discover my unique qualities by truthfully living and dancing through their own. Their bonds stay with me, even as we have been prematurely separated. From the first day, all of the people who make up Juilliard, from my peers to staff and faculty, affirmed and reaffirmed my place in this community through every stage of these four intense, exhilarating, arduous, incredible years. 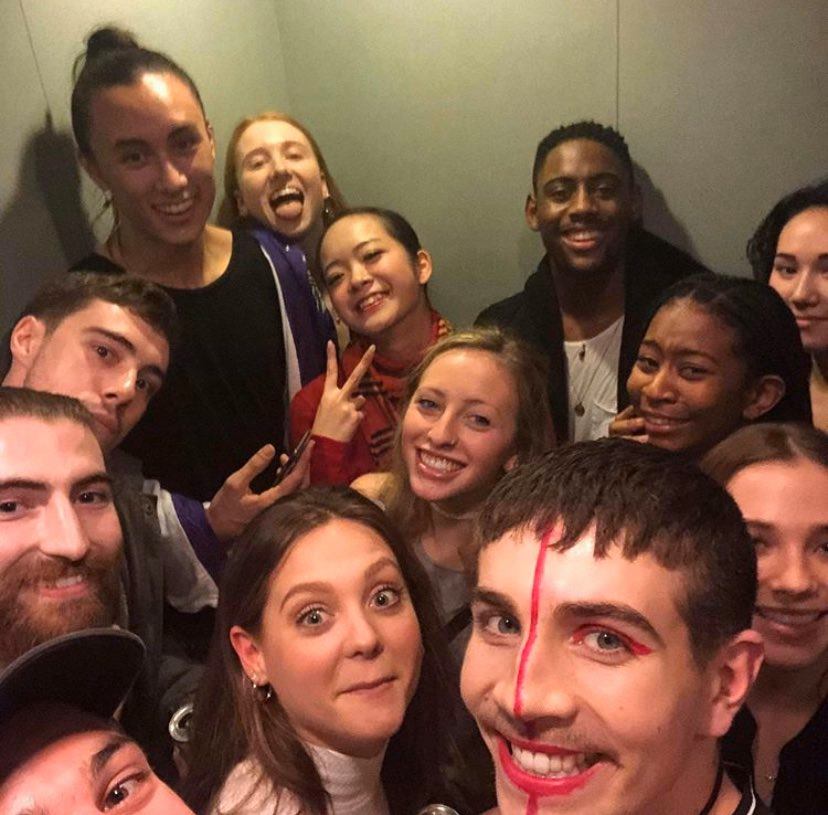 I want to tell another story about the picture above, this one much more recent. A few months ago, while leaving our friend’s apartment, several classmates and I filed into an elevator, which was not a very wise decision. It got stuck halfway down, leaving almost a dozen of us crammed into 25 square feet of space. Fortunately, it was just 20 minutes, maybe less, before the fire department rescued us. In those 20 minutes, I remember thinking how if I was to be stuck in an elevator with anyone, it would be them. The air inside that elevator, warmed by our collective breath, simmered the same way it did on move-in day, with the same pretense that our lives were reaching a pinnacle; like we were going to celebrate our last semester together; like we were going to perform one last time on stage together; like we were going to embrace in a teary goodbye in our caps and gowns on graduation day. Our puffy, winter-coated bodies were pressed up against each other like pillows, with no inches of room spared, like a physical manifestation of our closely knit web. We thought that the comfort of that literal closeness would carry us to the end of our journey. But endings, much like beginnings, are hardly ever that simple.

Now, five months later, as I sit in my cozy house in San Francisco with my first family, feeling ligh-years away from my second family, I have found myself at an odd rendition of the beginning again. Much like my 18-year-old self, I feel confused, afraid, sad, frustrated, angry, and despite the support that exists around me, lonely. This time, I know it is not only me, but all of humanity that is finding itself in a jumbled, freshly overturned, brand new beginning. The distance of quarantine has severely fractured our world into the ‘virtual’ and the ‘real.’ My tired eyes recognize my friends’ faces, reproduced by bright pixels, and my ears can hear their voices, captured and synthesized by the computer’s microphone. I know in my mind that they are there, but as each day passes it gets harder and harder to feel them, to picture them beside me. So until I really am with them again, I have no choice but to imagine.

To my incredible 2020 family: You are with me through every moment of the day, through every meal, every Zoom class, every movie I watch, every song I listen to, and every dream I have. I can hardly wait for the day that we can be together, and rejoice in a new beginning. 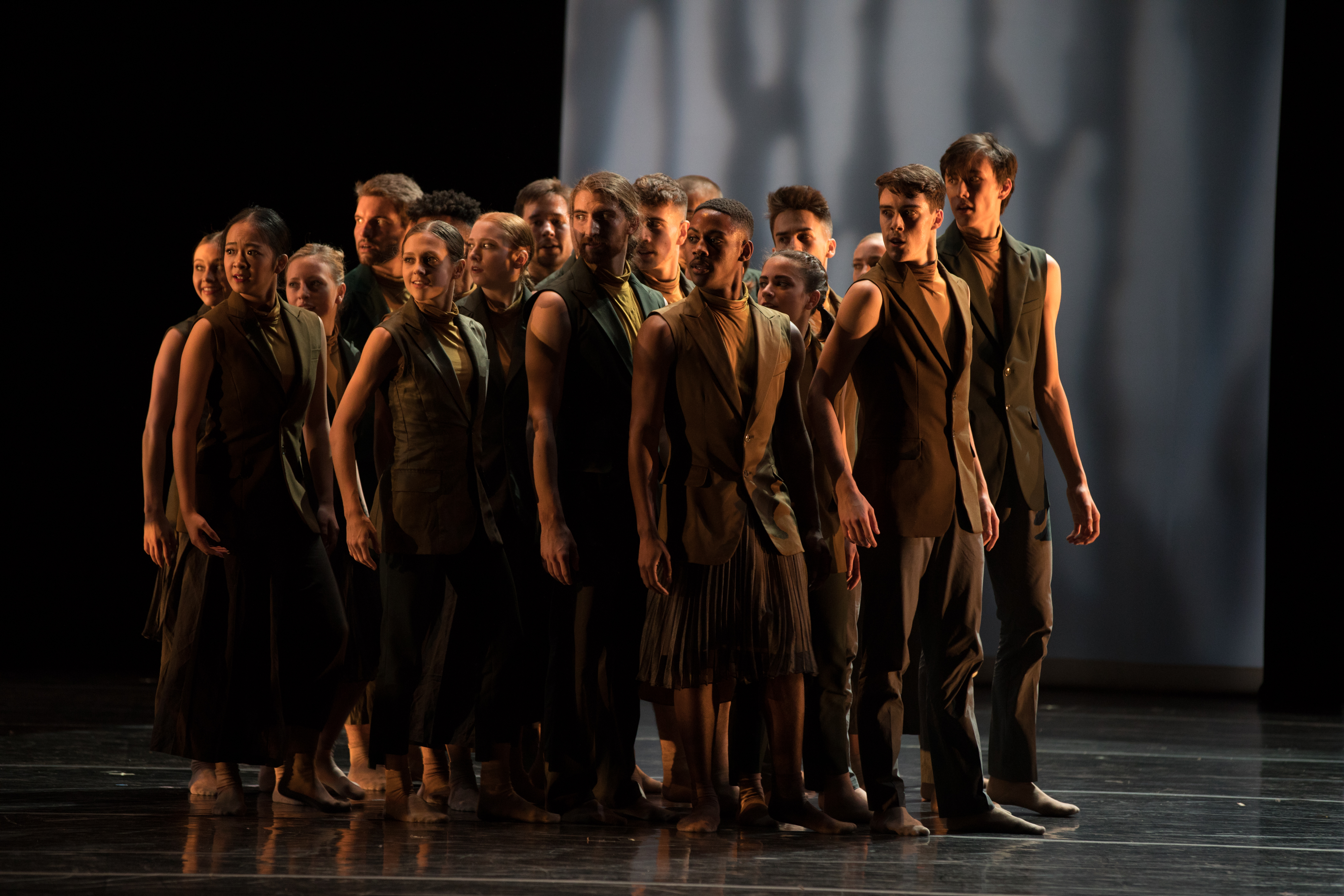