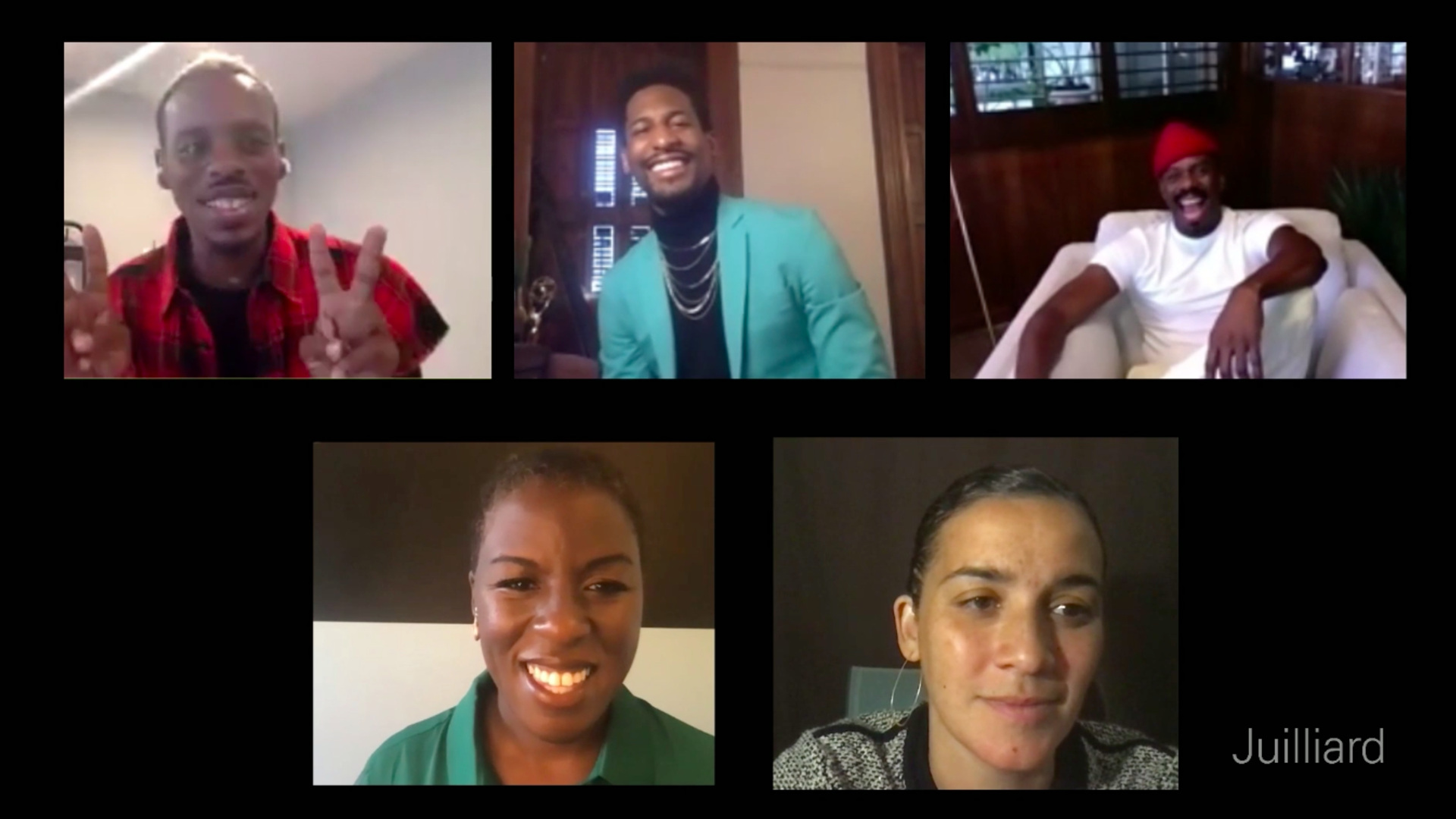 Calling America to its higher self

In 1964, two luminaries of the 20th century, writer James Baldwin and photographer Richard Avedon (who had been high school classmates in the Bronx years earlier), published Nothing Personal, which Juilliard faculty member Fredara Hadley describes as “an unflinching interrogation of the contradictions between American myths and American realities.” In June, Juilliard staged a live virtual performance of director Patricia McGregor’s work Nothing Personal but ... with excerpts from the book.

In Patricia McGregor’s Nothing Personal, but ..., actor Colman Domingo breathed life into James Baldwin’s text and Jon Batiste (BM ’11, MM ’13, jazz studies) and dancer Lil Buck—both Juilliard Creative Associates—channeled the indignation and hope with which Baldwin wrote. Although Baldwin and Avedon published Nothing Personal in 1964, more than 55 years later, its questions of who we will choose to be as a nation and who we will be to each other remain urgently relevant. McGregor’s Nothing Personal, but … premiered in 2014, during the first wave of 21st-century Black Lives Matter activism. The decision to restage it at Juilliard came in the midst of a revival of BLM activism in response to the police-involved deaths of George Floyd, Breonna Taylor, and Rayshard Brooks. A moment in which a swath of the country activated anger and angst against the backdrop of a global pandemic to call America to its higher self.

The performance was a poignant reminder of the necessity of creating and engaging live art, especially in moments of societal upheaval and uncertainty. It was a privilege to moderate the post-performance conversation with Patricia McGregor, Colman Domingo, Jon Batiste, and Lil Buck. What follows are excerpts from that discussion in which they delve deeper into the ongoing influence of Baldwin, the importance of collaboration, and how staging this performance on a Sunday morning felt like jazz and a Sunday morning sermon.

*This transcript has been edited for length and clarity

Fredara Hadley: I’m interested to hear about the similarities and differences in staging this piece in 2014 versus staging it in 2020 in the time of renewed Black Lives Matter protests and a global pandemic.

Patricia McGregor: In 2014 Bill T. Jones and the folks at New York Live Arts asked [me] to enliven Nothing Personal by Baldwin. I think Baldwin’s genius is always there on the page to me. People talk about Shakespeare all the time, and I love Shakespeare, but Baldwin, to me, brings everything that Shakespeare brings to the page. Baldwin is political, he's personal, he's funny, and he's heartbreaking. He shows you that he knows the dimensionality of our lived experience in a very real way.

This performance was really us saying this text still speaks to us now in this moment. Colman wrote me a week and a half [before the performance] and said, “What if we bring that text back and join with some other deep collaborators and just see how this hits us now?” So this [performance] feels even more like jazz to me, in that Baldwin's text is one of the main instruments that we all are riffing off.

Colman Domingo: I love these brothers, Lil Buck and Jon, so very much. I respect them as artists. We try to help translate what’s happening with our consciousness together. Whatever the source of pain, the joy, the love—we represent it through our artistry. Patricia and I discussed what it would be like to bring people from different artistic worlds together. And in my mind, it becomes, I’m like Baldwin, as Baldwin was a preacher. So, therefore, today’s performance felt like a Sunday sermon, which is perfect because today is Sunday.

In thinking about James Baldwin, I always believe that he is the soul and the consciousness of America. I love that Baldwin was willing to criticize America and challenges the ideals that we say that we are. And so I thought, what better way to do it than to enlist two other brothers of mine so we could riff together. We don’t have to be in our pandemic silos, we can come together and strike up some jazz together.

Lil Buck: Nina Simone once asked, “How can you know you can be an artist and not reflect the times?” And that’s what I tried to do as much as possible in this piece. I always try to be the vessel, emotionally, spiritually, and from a point of view from the heart. That is what brings strength to what I do and it gives me the power to speak that language through my movement.

I’ve always been a big fan of Baldwin because his words are so powerful. They bring out the power in my movement, so this has been one of the most powerful collaborations I have done. It was just a great experience working with these guys and really bringing these texts to life and just having this dialogue through movement, word, and song.

Jon Batiste: Colman is somebody we’ve been talking about finding a way to work with, and Buck and I have worked together, but never the three of us. Then, Patricia just blew my mind with the way that she had a whole vision [that] we put everything together in this virtual platform.

The book Nothing Personal is so moving, and there were moments where we as performers connected as if we were in the same space. But there’s something to the virtual aspect of it that makes you even more attentive. Just the heart of it trying to follow [Colman] and his inflections and his tone as I’m accompanying, then sometimes we switch and I’m leading with the song and then he comes back. In the timing of that there’s a lot of discovery. [It’s] exciting as an artist to find new mediums.

Patricia McGregor: We’re going to find beauty in the leap of faith that it takes, and so it is, to me, a sermon. It is a leap of faith to jump into the unknown. But what we know is that we have each other, and that was so moving to me to see these incredible artists, trust each other, trust the text, trust me, trust everyone to hold each other in it—and that's part of the light for me.

One other collaborator I need to bring into the room is Julie Mehretu, who did the incredible paintings. She is just a phenomenal artist and soul and thinker. As we thought of people [to participate in this project], we were especially thinking of collaborators who had worked with Juilliard. So I loved that we used Julie’s work as well as a meditative space to the multilayered realities that we live. All of these energies are like this pure note, this pure thing, comes out of the end [result], which is [that] we must hold on to love.