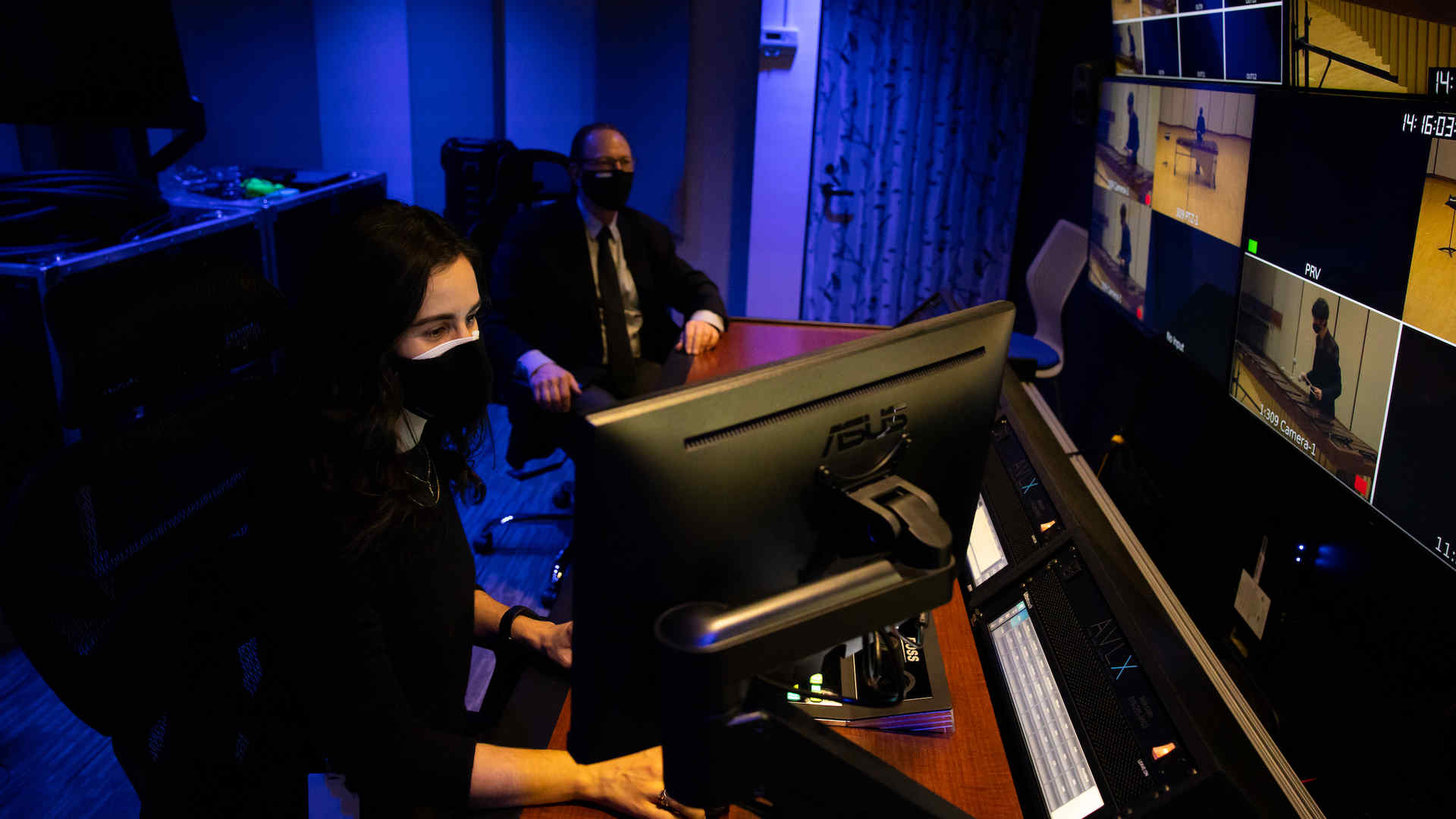 Last spring, Juilliard stepped up the realization of a long-range strategic objective of President Damian Woetzel and the school generally. The goal: to greatly increase the school’s livestreaming capabilities with a program that would enhance students’ educational experiences and make Juilliard performances more accessible to audience members who otherwise might not be able to attend. On January 12, after an intensive six-month development, the new livestreaming program was launched with fourth-year undergrad Ryan Soeyadi’s piano recital, the first of 293 currently scheduled performances

While Juilliard had livestreamed a handful of events annually for a number of years, this expansion began with the much more ambitious goal of potentially being able to livestream all of the 700-plus performances typically held each year, including the capacity for up to eight simultaneous streams. The need for that to happen sooner rather than later became clear with last spring’s shutdown. And by June, Kevin Boutote, director of recording and classroom technology, was starting to make it happen along with Sascha von Oertzen, chief audio/video engineer, and Chris Torri, the lead audio/video designer on the project from AVLX of Franklin, Tennessee.

The first step was finding a company that could retrofit the 50-year-old building with the state-of-the-art technology needed to capture Juilliard performances. This “massive undertaking,” as Boutote describes it, has resulted in 25 video-enabled spaces and five control rooms (one new, four retrofitted) throughout the building. There are also mobile racks that can be operated remotely, particularly important at the moment because of the labyrinthine rules about room capacity and social distancing put in place to protect everyone’s safety.

The new system isn’t just a matter of bringing video cameras to practice rooms and recital halls. “We have to really rethink the whole event,” Boutote, who started at Juilliard in 2018, noted. “It’s been a big learning curve for everyone.” In addition, the school received consulting help in devising its content strategy from a team of volunteers from Harvard Business School Alumni Club of New York’s Community Partners program.

In December, Juilliard recruited Elizabeth Svokos as the school’s founding supervising producer and video director. An industry veteran who had launched WNET’s All Arts channel and worked on the Metropolitan Opera’s Live in HD broadcasts, Svokos has joined Boutote to lead the hardworking recording team in collaborating with the artistic divisions to reimagine performances for a digital season.

Take Juilliard Opera’s upcoming performance of Handel’s Teseo. Rehearsals began in the Peter Jay Sharp Theater in late January. Each singer had to be recorded individually on the stage’s apron. Because they were singing unmasked, no one else, not even a technician, could be in the 900-seat theater. To maintain safe air quality, the 15-member Historical Performance orchestra and conductor Gary Wedow were separated from the singer, performing from behind the stage’s fire curtain, which brought its own set of challenges (read about two of the singers’ experience here). The finished opera will be streamed later this spring—go tojuilliard.edu/calendar to get the full schedule of upcoming streams.

Svokos pointed out that that an additional challenge these days is the need to allow rooms to “rest” to mitigate aerosol spread, making the recording period much longer than it would be if a live performance were being filmed. “You really have to think creatively about how to make that a palatable visual and audio experience,” she said. “It’s been challenging to flex our creative muscles in that way.”

All this has been happening as the world at large has accelerated toward more and more video capture. In the fall, Juilliard was part of a consortium led by Yale School of Music that ended up helping Zoom create a new high-fidelity mode that allows for improved music-making.

For Juilliard students, recording their work has become ever-more important, and the hope is that the school’s new streaming technology and mindset will have a curricular component as well. “These two wonderful endeavors—what’s on stage and what’s being captured—are meeting,” Svokos said. “Live performance won’t ever be superseded, but it’s important for students to have exposure to how these devices are operated. You come to Juilliard because you want to work in the performing arts, and the fact that the performing arts have gone dark in the last year but Juilliard has turned on the lights is amazing.”