Marin Alsop to Address Class of 2021 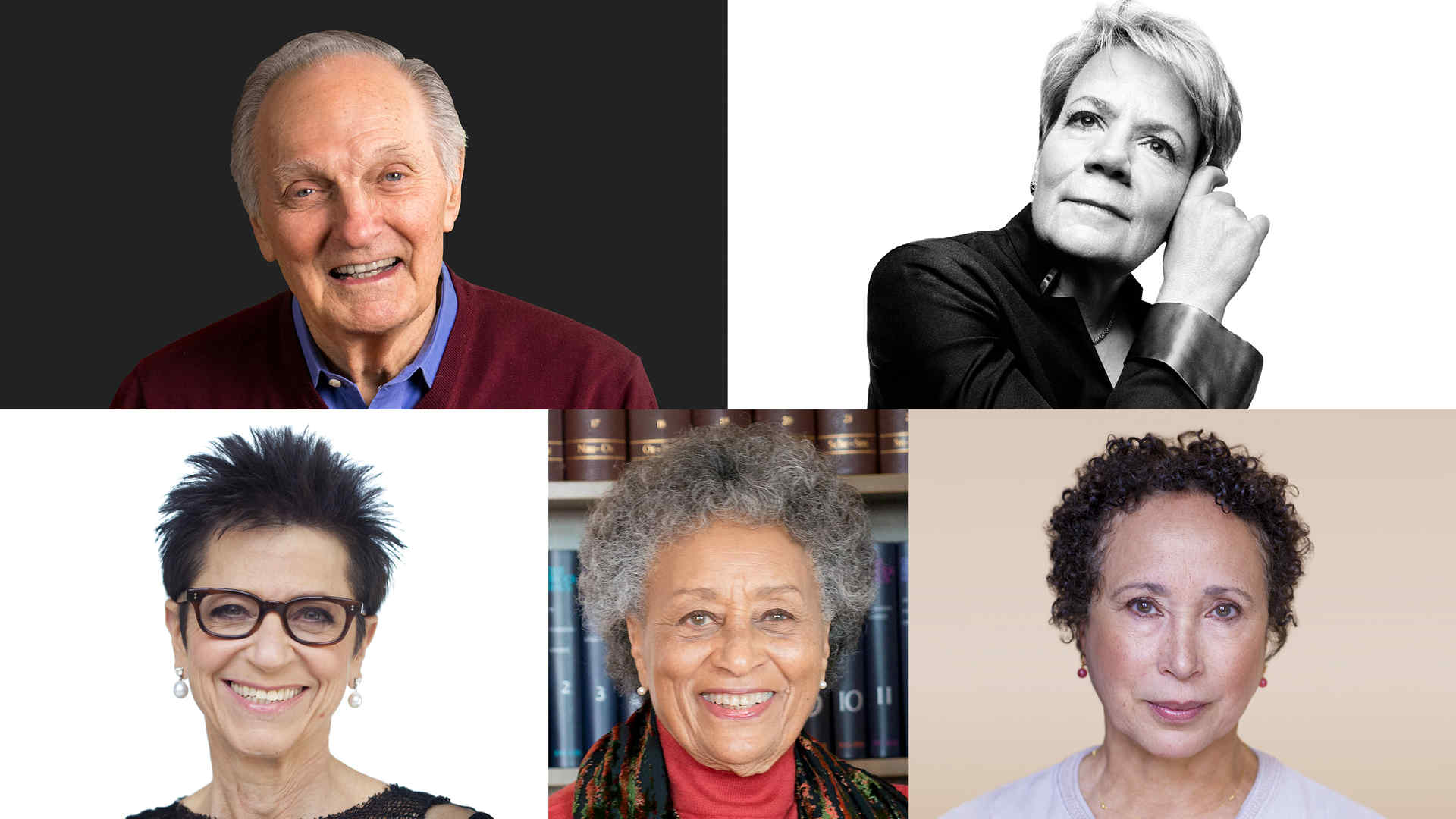 Juilliard has announced that trailblazing conductor Marin Alsop (Pre-College ’72; BM ’77, MM ’78, violin) will be the speaker at the 116th commencement ceremony, on June 18 at 11am.

The ceremony, which will be held outdoors, will have very limited in-person capacity and will be livestreamed.

“I am incredibly proud of the magnitude of what our graduates—and indeed all of our students—have accomplished despite the challenges of the past year,” President Damian Woetzel said in making the announcement. He also noted that Alsop’s “artistic path and teaching and mentoring of our students as well as young people around the world provides inspiration for the future of the arts.”

Alsop will be one of five honorary degree recipients, each of whom has made indelible contributions to the world of the arts. The others are actor, writer, and director Alan Alda; dance educator and advocate Jody Gottfried Arnhold; soprano Reri Grist; and dancer and artistic director Virginia Johnson. You can read more about them below.

Seven-time Emmy winner Alan Alda played Hawkeye Pierce and wrote many of the episodes on the classic TV series M*A*S*H; he also had continuing roles on ER, The West Wing, 30 Rock, The Blacklist, The Big C, Horace and Pete, The Good Fight, and Ray Donovan. Alda’s interest in science led to his hosting the PBS shows Scientific American Frontiers and The Human Spark.

An Oscar-nominated actor (for The Aviator), he received the Screen Actors Guild Lifetime Achievement Award in 2019. His other films include Bridge of Spies, Crimes and Misdemeanors, And the Band Played On, Same Time, Next Year, and California Suite as well as The Seduction of Joe Tynan, which he wrote, and The Four Seasons, Sweet Liberty, A New Life, and Betsy’s Wedding, which he wrote and directed. His theater credits include Tony-nominated performances in Glengarry Glen Ross, Jake’s Women, and The Apple Tree; he wrote the play Radiance: The Passion of Marie Curie as well as Dear Albert, a reading for the stage of Einstein’s letters.

Alda co-founded and is a visiting professor at Stony Brook University’s Alan Alda Center for Communicating Science; he’s a fellow of the American Physical Society; and he’s on the board of the World Science Festival. A bestselling author, Alda most recently wrote If I Understood You, Would I Have This Look on My Face?—My Adventures in the Art and Science of Relating and Communicating. His Clear + Vivid With Alan Alda podcast—interviews with experts at influencing and relating to others—has had more than 12 million downloads.

Marin Alsop (Pre-College ’72; BM ’77, MM ’78, violin) is the first woman to serve as the head of major orchestras in the U.S., South America, Austria, and Britain. She is chief conductor of the ORF Vienna Radio Symphony Orchestra; chief conductor and curator of Chicago’s Ravinia Festival; and music director of the University of Maryland’s National Orchestral Institute + Festival (NOI+F). In September, Alsop becomes music director laureate of the Baltimore Symphony Orchestra following 14 years as music director, during which time she founded OrchKids, a music education program for disadvantaged youth. In 2019, after seven years as music director, Alsop became conductor of honor of Brazil’s São Paulo Symphony Orchestra. She was also music director of California’s Cabrillo Festival of Contemporary Music for 25 years. Last year, a planned commemoration of Beethoven’s 250th anniversary with leading international arts organizations was transformed into a crowd-sourced project and call for tolerance, unity, and joy through the composer’s Ninth Symphony with videos tagged #GlobalOdeToJoy.

In addition to being a MacArthur Fellowship awardee, Alsop made history as the first female conductor of the BBC’s Last Night of the Proms. Among other awards and academic positions, she is the artist in residence at Vienna’s University of Music and Performing Arts and director of graduate conducting at the Johns Hopkins University’s Peabody Institute. To nurture the careers of fellow female conductors, in 2002 she founded what is now known as the Taki Alsop Conducting Fellowship.

Dance educator and advocate Jody Gottfried Arnhold is the founder of the Dance Education Laboratory at 92Y and an executive producer of the New York Emmy–nominated documentary PS DANCE! Dance Education in New York City Public Schools, created to raise awareness and advocate for her mission, which is dance for every child.

Arnhold’s experiences teaching dance in New York City public schools for 25 years were the catalyst for her support of dance education. Her contributions have created unparalleled opportunities for dance to be taught, researched, and analyzed, providing substantial evidence that dance is essential to every child’s education. They include the Arnhold Graduate Dance Education Program at Hunter College, which trains and certifies dance educators as well as the dance education doctoral program and the Arnhold Institute for Dance Education Research, Policy & Leadership at Teachers College, Columbia University, which has generated valuable leadership for dance education in public policy. Arnhold holds a master’s from Teacher’s College.

In addition to her support of dance in public schools and higher education, Arnhold supports many New York City dance companies including Ballet Hispanico, where she is honorary chair, and she mentors dance educators. In addition to having received many awards, Gottfried Arnhold serves on boards of education and cultural institutions including 92Y, Lincoln Center, Ballet Hispanico, and Hunter College Foundation, and she is a director of the Arnhold Foundation, Harkness Foundation for Dance, and Mulago Foundation.

Coloratura soprano Reri Grist was born in New York City and debuted on Broadway at age 14 with Ossie Davis and Ruby Dee. She studied with Claire Gelda and graduated from the High School of Music & Art and Queens College. In 1957, as Consuelo in West Side Story, she was the voice of “Somewhere.” Grist then recorded Mahler’s Fourth Symphony with Leonard Bernstein. She debuted with the Santa Fe Opera in 1959, and then joined the Cologne Opera (1960), the Zürich Opera (1961-64), the Vienna State Opera (1963), and the Munich State Opera (1970). Her career included a 1966 debut (with return performances over 12 years) at New York’s Metropolitan Opera, and 73 performances at the San Francisco Opera, including L’elisir d’amore opposite Luciano Pavarotti in 1969.

Since her last opera performance (at De Nederlandse Opera Amsterdam, in 1991), Grist has continued to teach. She has served as professor of voice in Munich and at Indiana University, Bloomington, and she has led numerous master classes in Santa Fe, New York, San Francisco, Zürich, and Madrid. In addition to having a legion of admiring students, Grist’s accolades include the Legacy Award from the National Opera Association, a Lifetime Achievement Award from the Licia Albanese Foundation, and an honorary doctorate from Queens College. With her husband of 53 years, Ulf Thomson (a musicologist and former general manager of what was then known as the Berlin Radio Symphony Orchestra), Grist resides in Hamburg, Germany.

Virginia Johnson was a founding member of and principal dancer with Dance Theatre of Harlem (DTH) for 27 years and has been its artistic director since 2009. Born in Washington, D.C., she graduated from the Academy of the Washington School of Ballet and attended the School of the Arts at New York University as a University Honors Scholar.

In her performing career, Johnson is best known for Giselle, A Streetcar Named Desire, and Fall River Legend. At DTH, she performed most of the repertoire, with principal roles in Concerto Barocco, Allegro Brillante, Agon, A Streetcar Named Desire, Fall River Legend, Swan Lake, Giselle, Voluntaries, and Les Biches, among others. Her choreographic credits include the television film Ancient Voices of Children as well as works for Goucher College, Dancers Responding to AIDS, the Second Annual Harlem Festival of the Arts, Thelma Hill Performing Arts Center, and Marymount Manhattan College, where she was an adjunct professor. While she was still performing, Johnson’s interest in journalism led her to Fordham University; she also attended the School of Visual Arts before becoming founding editor in chief of Pointe magazine.

Among the many tributes paid to her, Johnson is an honorary member of Alpha Kappa Alpha Sorority and The Society, Incorporated, and was honored by First Lady Michelle Obama for her contribution to dance. She serves on the advisory boards of the Center for Ballet and the Arts at NYU and Dance NYC, and she is a member of the board of the Guggenheim’s Works & Process series.