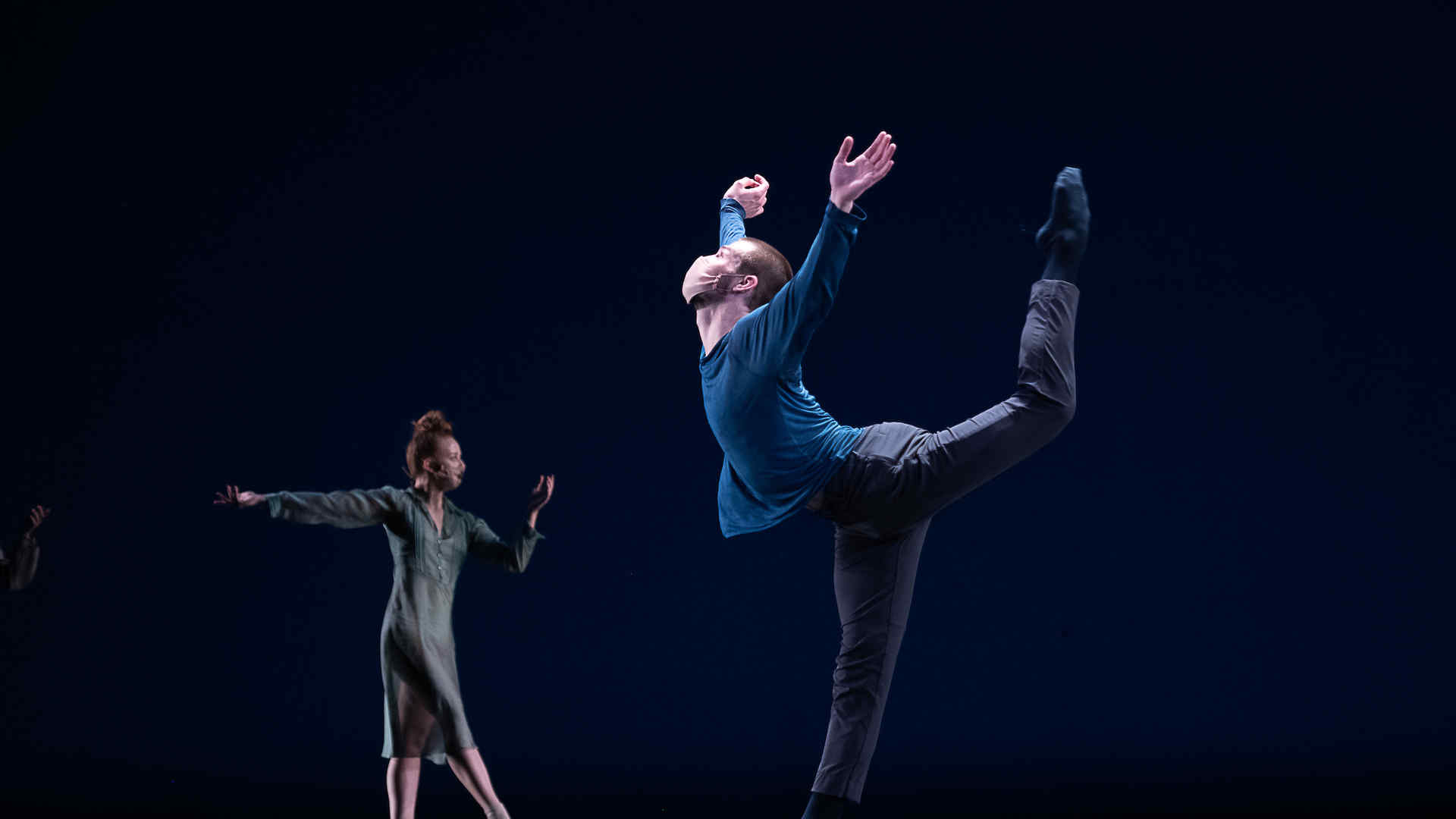 NEW YORK –– Juilliard LIVE will premiere New Dances: Edition 2020-21, filmed in Juilliard’s Peter Jay Sharp Theater and free for online audiences, beginning Thursday, August 19, 2021, at 2pm (ET) at juilliard.edu/live. After the premiere, the performance will remain available for on-demand viewing on Juilliard’s media gallery and the Juilliard YouTube channel. Presented annually, New Dances features premieres of four new works, one by each class of Juilliard dancers. The works are created on—and with—them by professional choreographers, and every member of each class is involved. The 2020-21 choreographers are Tiler Peck, Sonya Tayeh, Bobbi Jene Smith, and Matthew Neenan.

Juilliard dancers followed strict health and safety protocols during the New Dances creation process and filming. Each class was split into three groups to maintain social distancing in the studios. These groups worked independently of one another during the process, including during filming in the Peter Jay Sharp Theater. Choreographers worked with their dancers either in person or remotely via the Zoom platform. Large screens and wide lens cameras were made available in all studios to allow for synchronous classes with one teacher and students in multiple studios. In addition, some choreographers, such as Bobbi Jene Smith, worked with the entire third year class masked and outside on the plaza level of the Lincoln Center campus for some rehearsals; she also took advantage of the Zoom platform for most of her creation process.

Alicia Graf Mack, dean and director of Juilliard Dance, said: “All of the works on this program have been created in pods of no more than eight dancers. The choreographers have collaborated with the students both on Zoom and in person, finding ways to generate movement without touching or partnering. Everyone from our Dance Division staff to our production team dedicated their energies to giving the dancers a meaningful learning and performance experience. In turn, the dancers gave their all. Seeing these performances, beautifully documented on film, reminds me of the power of dance and music to tell stories and communicate in the universal language of the soul.”

Tiler Peck is an award-winning principal dancer with the New York City Ballet, actress, author, designer, and rising choreographer. She made her Broadway debut in The Music Man at age 11 and starred as Ivy Smith in Broadway’s On The Town. She also portrayed Louise Bigelow in the Emmy-nominated production of the New York Philharmonic’s Live From Lincoln Center production of Carousel and played the title role in the Kennedy Center’s musical Little Dancer. She has performed twice at the Kennedy Center Honors and choreographed the smash hit action movie, John Wick: Chapter 3—Parabellum. Peck is the designer of Tiler Peck Designs for Body Wrappers and recently released her first children’s book, Katarina Ballerina.

Bobbi Jene Smith (’06, dance) is an alumna of Juilliard, the North Carolina School of the Arts, and Royal Winnipeg Ballet School. Her choreography has been presented by the Batsheva Dance Company, CORPUS of the Royal Danish Ballet, LADP, VAIL Dance Festival, LaMama Experimental Theater, and the Martha Graham Dance Company. In 2017, she became a founding member of the American Modern Opera Company and, in 2019, was awarded the Harkness Promise Award and was named Martha Duffy resident artist at Baryshnikov Art Center. Her film and video work includes Anagnorisis, directed by Wim Wenders; Annihilation, directed by Alex Garland; MA, directed by Celia Rowlson-Hall; and Yossi, directed by Eytan Fox. The documentary Bobbi Jene, which follows her trajectory of leaving a dance company to create her own work, won best documentary, best cinematography, and best editing at the Tribeca Film Festival in 2017. The following year, Smith starred in as well as choreographed the films Mari, directed by Georgia Parris and choreographed by Maxine Doyle, and Aviva, directed by Boaz Yakin.

About Alicia Graf Mack, Dean and Director of Juilliard Dance

Alicia Graf Mack enjoyed a distinguished career as a leading dancer of Alvin Ailey American Dance Theater. She has also been a principal dancer with Dance Theatre of Harlem and Complexions Contemporary Ballet. Graf Mack has danced as a guest performer with Alonzo King’s LINES Ballet, Beyoncé, John Legend, Andre 3000, and Alicia Keys. Graf Mack graduated magna cum laude with honors in history from Columbia University and holds an MA in nonprofit management from Washington University in St. Louis. In 2007, Smithsonian magazine named her an American Innovator of the Arts and Sciences. She is a recipient of the Columbia University Medal of Excellence, an award given each year to one alumnus who has demonstrated excellence in their field of work. In 2008, she delivered the keynote address to the graduates of Columbia University’s School of General Studies. As a dance educator, Graf Mack taught as adjunct faculty at the University of Houston and was a visiting assistant professor at Webster University. She is a cofounder of D(n)A Arts Collective, an initiative created to enrich the lives of young dancers through master classes and intensives. She began her inaugural season as director of the Juilliard Dance Division in fall 2018.

Under the direction of Alicia Graf Mack, Juilliard Dance develops artists of the 21st century—trained in ballet, modern, and contemporary dance forms. Established in 1951 by William Schuman during his tenure as president of Juilliard, with the guidance of founding division director Martha Hill, Juilliard became the first major teaching institution to combine equal instruction in both contemporary and ballet techniques. In the four-year dance program—leading to a bachelor of fine arts degree—students learn the great traditions of both past and present. Juilliard dancers enjoy unparalleled opportunities to work with today’s leading choreographers and perform both new and existing repertory. In addition to high caliber technical training and performances, dancers learn about the craft of choreography and immerse themselves in other facets of the field.

Juilliard’s Dance Division was the proud recipient of the 2015 Capezio Award, the first educational institution to receive the honor. (juilliard.edu/dance)

Dance commissions at Juilliard are made possible through the New Work/Guest Artist program, generously endowed by the Howard Gilman Foundation and the LuEsther T. Mertz Charitable Trust.

Juilliard’s creative enterprise programming, including enhancement to these performances, is generously supported by Jody and John Arnhold.

Available free beginning Thursday, August 19, 2021, at 2pm (ET) at juilliard.edu/live. After the premiere, the performance will remain available for on-demand viewing on Juilliard’s media gallery and the Juilliard YouTube channel.

End, Middle, Begin by Sonya Tayeh (Dancers from the Class of 2023)