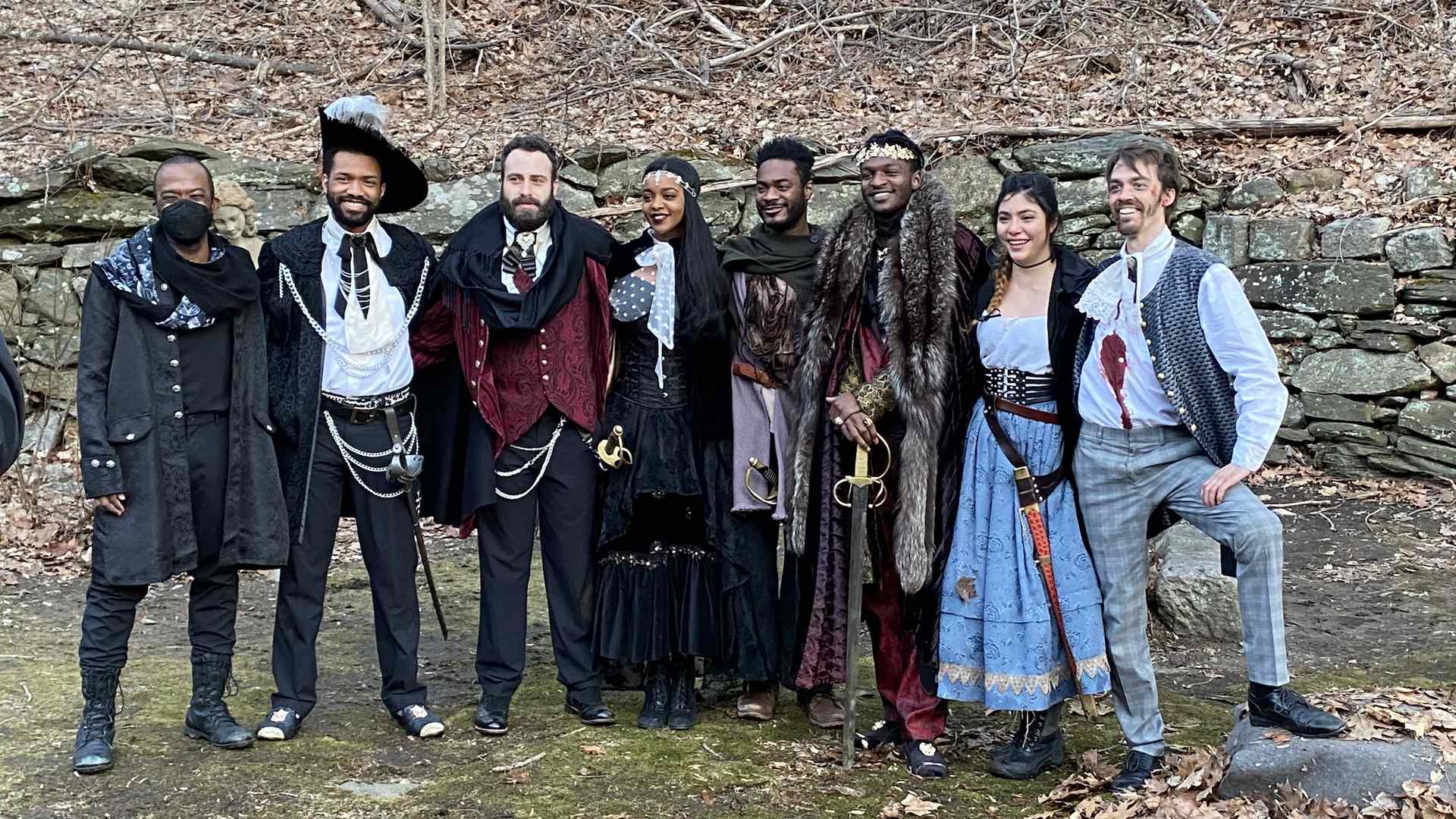 How do you create an extraordinary opportunity for graduating actors during a pandemic? How do you allow them to work together in-person safely without masks? These were the challenges that, 12 months after the pandemic began, Juilliard set out to solve—and was able to do so with an incredible degree of organization and attention to COVID safety. For two and a half weeks in February and March, Group 50 decamped to East Haddam, Connecticut, to film the three culminating plays of their Juilliard training on the campus of the historic Goodspeed Opera House.

Remote rehearsals had taken place via Zoom over the winter for the three projects—Hansol Jung’s Cardboard Piano, directed by Jade King Carroll; Pedro Calderón de la Barca’s Life Is a Dream, translated and adapted by Nilo Cruz and directed by Shaun Patrick Tubbs; and Will Arbery’s Plano, directed by Danya Taymor. At the same time, the Juilliard administration worked with the Drama Division to create a performance bubble where, in collaboration with the creative teams, production department, visual media company Dancing Camera, medical advisors, and actors and directors, these plays could be fully realized as site-specific theater/film hybrids.

Once the many approvals and logistics were ironed out, a multiphase process involved frequent COVID testing and rigorous safety protocols to ensure all participants remained virus-free. Each company member quarantined prior to arriving at the opera house’s campus, followed by an on-site quarantine during which rehearsals proceeded virtually from actors’ individual rooms. Post-quarantine, bubble participants continued to mitigate risk by maintaining masking and physical distance. Finally, actors were able to remove their masks solely for filming—marking their first time acting together in person and without masks in over a year.

The whirlwind process concluded with three captured plays, newfound knowledge, and no positive tests. Five members of Group 50—JeVon Blackwell, Bianca Norwood, Piper Patterson, Nedra Snipes, and Gabriela Torres—reflected on this special experience. Their responses have been edited for clarity and length. 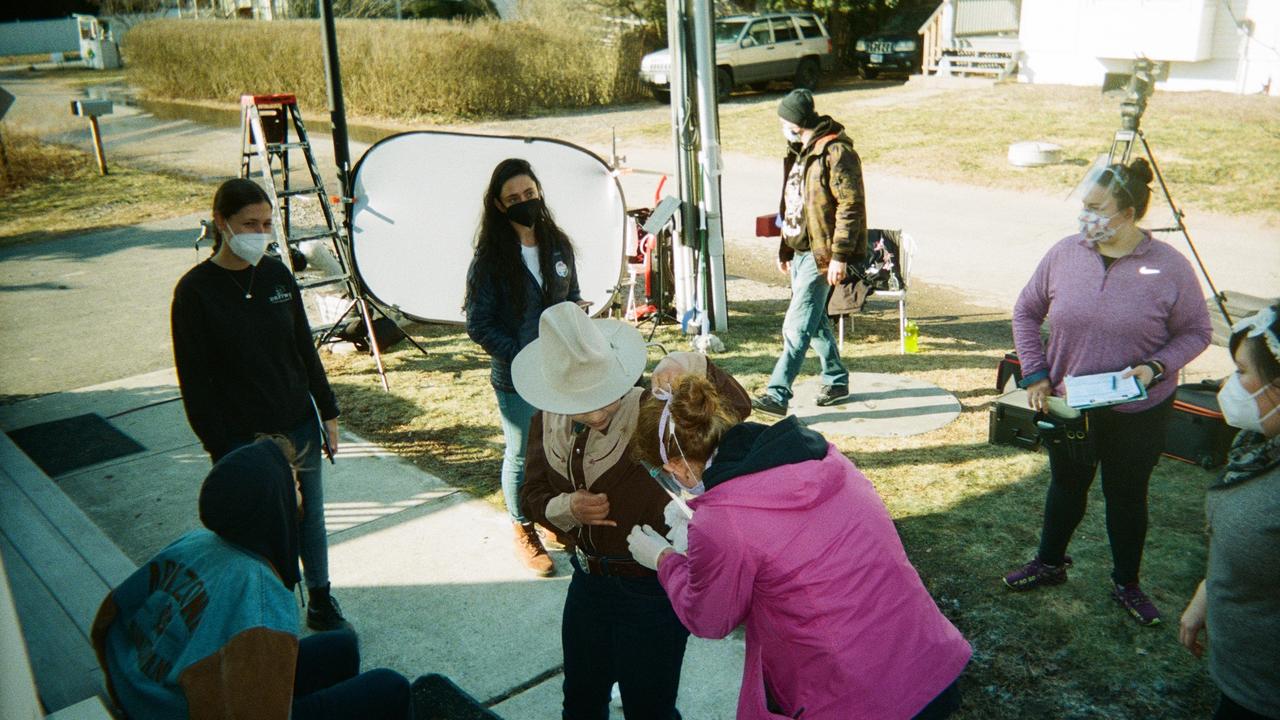 Members of the 'Plano' cast and crew during the filming (Photo: Rosie Yates)

How did it feel once you were finally able to act without masks or social distancing?

Gabriela: There was this moment—when we were still wearing our masks—when I had a scene with Mallori Johnson that we had rehearsed many, many times on Zoom. This was the first time we did it in-person, and I remember seeing her eyes. She just looked at me, and my body didn’t quite know how to respond because I hadn’t been acting with someone in that way in such a long time. I hadn’t received that amount of human emotion in a while. I felt a moment of “yes, this is what I love about acting.”

Bianca: On the day we were cleared to rehearse without masks, our director built in a ritual of taking our masks off. She understood how scary that could be—how it could bring up a lot of emotions. Even though we had quarantined and been tested intensively and I knew I was safe, it was still jolting to be close to other people after so long. You remembered that this is how it used to feel to just be.

Nedra: It felt as if I saw my classmates in a more intimate way than I had in the past four years. I love my cast—they’re all brilliant, creative beings, and I’ve been so inspired by their work. Being able to toss the ball back and forth with my friends again and create my first film alongside them was such a blessing.

What was it like creating these plays to be filmed, especially with a professional film crew?

Nedra: When [the film crew] came in, it was a new ball game—being able to talk to them, collaborate with them, ask them questions. A lot of how they work is physical and based in elements of dance, which I connected with thanks to my musical theater and ballroom training. One of my classmates described interacting with the camera like jazz: There’s a set structure but within that, anything can happen—it’s a continuous improvisation of movement.

JeVon: I love film acting—it was a relief to get in front of the camera. The film crew was fantastic. The pacing was quick and deliberate, which I enjoyed.

Piper: I felt very comfortable on set—it was sort of like coming home.

Gabriela: It helped a lot to think about the camera as a scene partner rather than an audience because it made me stop worrying as much about if something looked good. Instead, you start focusing more on how we can tell the story together with the camera. I also discovered a lot of little technical things. They always tell you that you move a little slower than usual on camera. And that’s where you’re like, “Thank you, Moni [Yakim, former Juilliard movement teacher]!” Because in Moni’s class, there’s this exercise where you all move together at the same time. You wouldn’t know where people were going to go, and you really had to tune into the other people in the room. On set, you would do that with the camera. 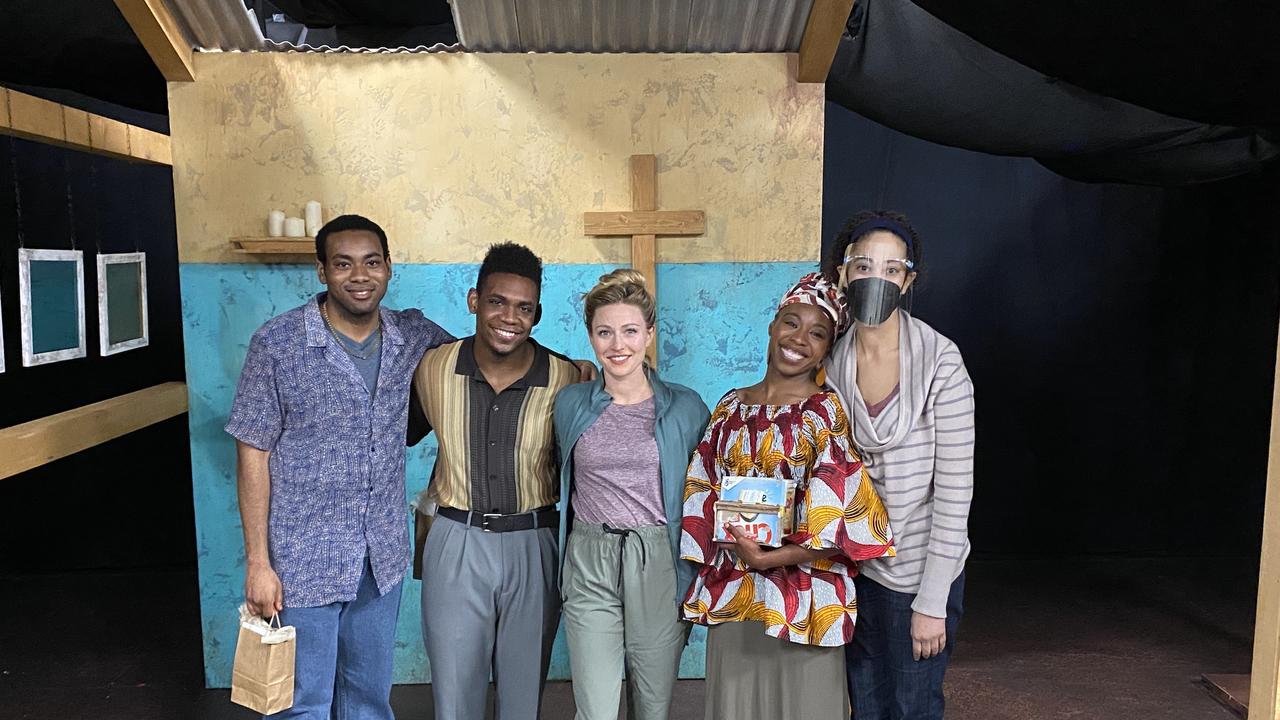 The cast of 'Cardboard Piano' with director Jade King Carroll

Is there a moment from the bubble that particularly sticks with you?

Gabriela: A lot of the moments I loved were the nights after filming, when everybody would go home and talk about the day. I loved those conversations—how joyful everyone was and how much everyone missed doing this. This is what we love to do.

Nedra: What I remember most is what happened in between shots—the people who were on deck to help, assist, and check in with us.

What was it like having this experience cap off your time at Juilliard?

JeVon: It was a truly wonderful experience that helped me to stretch and to grow—I’m grateful to all involved.

Bianca: Obviously, I never imagined that I would be doing this in my fourth year. It’s such an incredible feat and privilege to be able to get together solely for the purpose of telling a story. And to be with people you love and surrounded by nature—I’m extremely grateful for it all.

Gabriela: Not a lot of people get to do what they love 24/7, especially now. The bubble was this place where, or a moment, we weren’t thinking about the pandemic and we were just humans again. After a whole year, it was exactly what I needed. I learned a lot about myself as an actor, as a person, as a sister, as a friend. It’s a beautiful way to cap off this year.

Nedra: This experience has been a testament to Group 50. My classmates have such a light and ferocity. It takes some very porous beings to leap into the unknown with as much abandon as we have. We wanted to do this together, with one another, and we wanted to do this for ourselves. This process felt like a completion of our journey: full circle, divine.