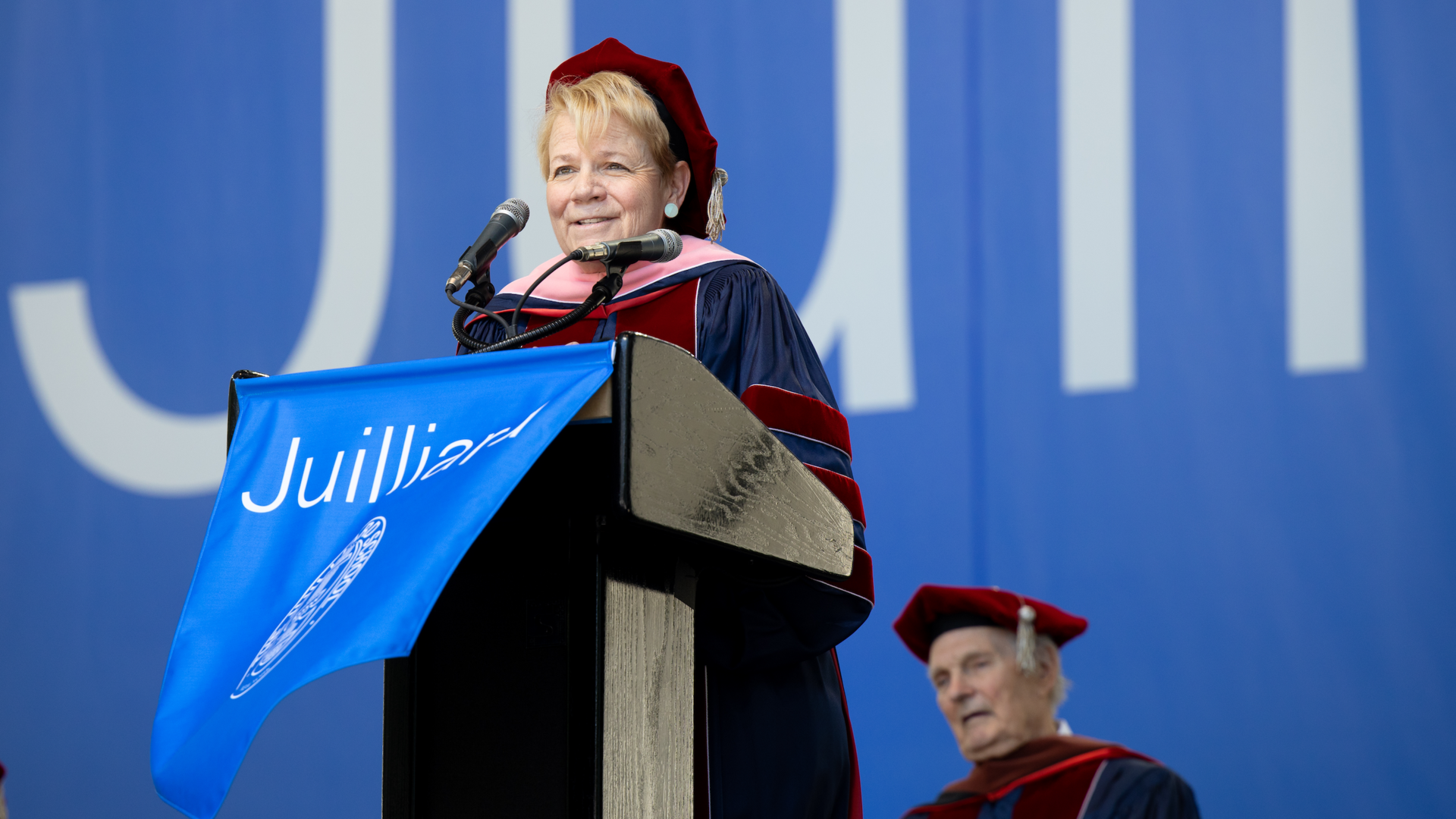 Exhorting Juilliard’s new graduates to “create a shared existence for art as a resource and refuge for all human beings,” conductor Marin Alsop (Pre-College ’72; BM ’77, MM ’78, violin) gave a rousing address at Juilliard’s 116th commencement on June 18. The first ever to be held outdoors, the ceremony took place in Damrosch Park because of pandemic safety concerns, but it had an extra air of ebullience for taking place after an incredibly challenging 15 months. A mix of traditional and the new, it culminated a year that was as well.

Alsop was one of five arts world luminaries to receive honorary degrees at the ceremony; the others were actor, writer, and director Alan Alda; dance educator and advocate Jody Gottfried Arnhold; soprano Reri Grist; and dancer and artistic director Virginia Johnson. President Damian Woetzel noted that the school was honoring these individuals “for the audacity of their dreams and the determination of their characters” as well as for their achievements, humility, grace, voices, perseverance, and “all they have given and keep giving to the world.”

The first woman to have been named the music director of a major American symphony orchestra, Alsop described her own artistic journey, including her efforts to help more women become conductors and to create more inclusion and diversity in orchestras. “You have a chance to transform your various fields and forge a path forward that I could only dream of,” she told the class of 2021. She noted that “something I learned early on is that challenge can often be synonymous with opportunity. And the bigger the challenge, the more compelling the opportunity.”

In closing her speech, Alsop said, “it’s a defining moment in history where the arts, led by you, the graduates of this unprecedented year, have the chance to create a shared existence for art as a resource and refuge for all human beings.”

With that, the degrees were conferred, and President Woetzel concluded the proceedings, asking the graduates to “send a cheer out to your family and loved ones watching from 62nd Street and around the world. We celebrate you today and into the future as you continue to shape music, dance, drama and the arts of tomorrow. We are so proud of you,” he said, adding “we cannot wait to see what your futures hold!”