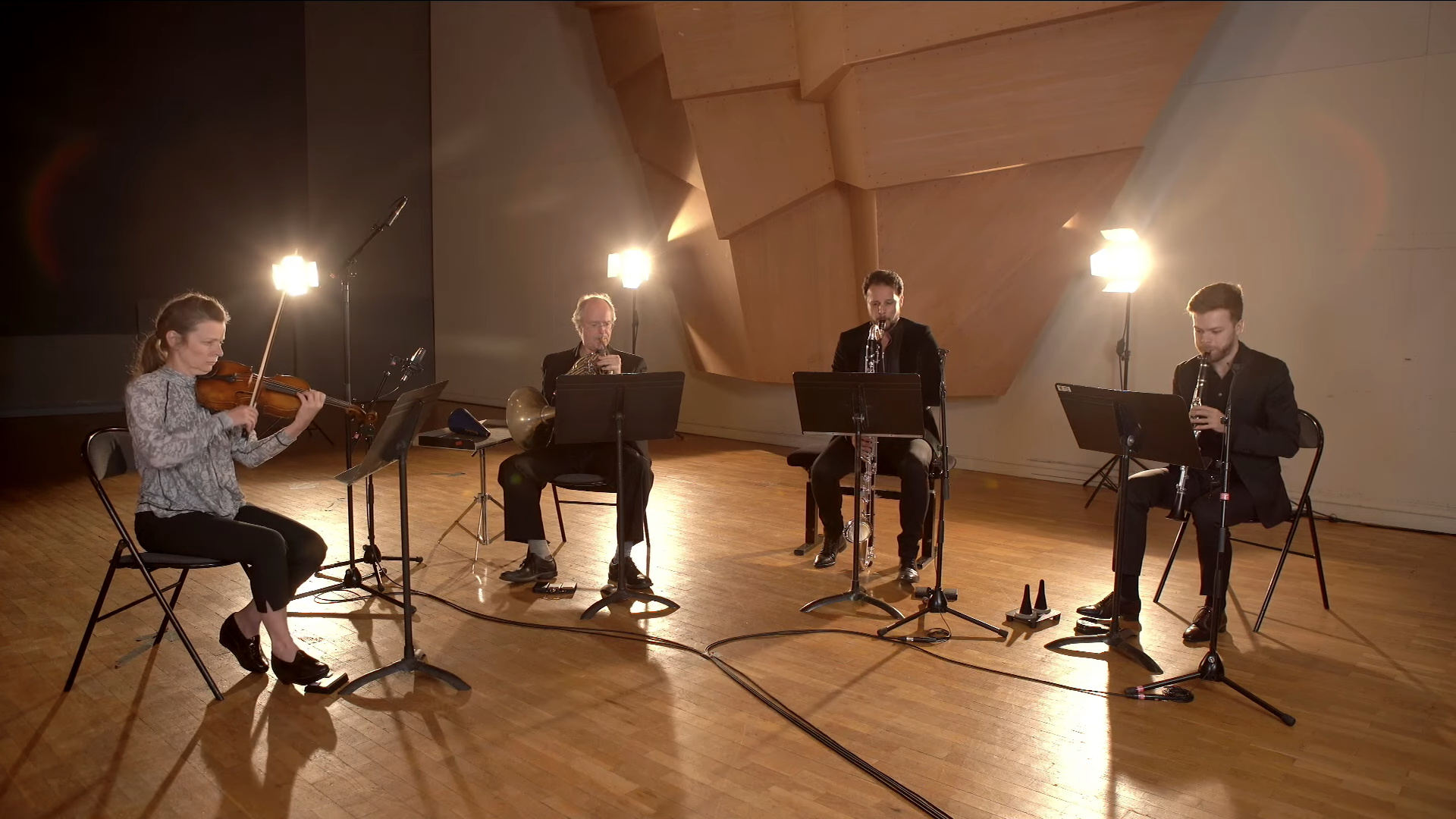 This past spring, for the second time, the Juilliard composition department teamed up with the Ensemble Intercontemporain in Paris for a virtual intensive commissioning project. Seven Juilliard student composers had the opportunity to work with some of the ensemble’s soloists on pieces that were then premiered virtually by the storied troupe.

In the video of the concert at which the works were premiered, faculty member Matthias Pintscher, who’s the music director of the ensemble, talked about this transatlantic collaboration. “In this long period of very little traveling, very little artistic life,” he said, he felt it was vital to “give the youngest composers the opportunity not only to write but also to get the deepest insight into the physicality of instruments.” The hope is that this collaboration will continue in person in the future, but in the meantime, three of the students who participated wrote about their experience. Click here to watch the virtual premieres.

Tell us about your piece.
It’s called Distant Bells for French Horn and Harp, and it explores the coloristic relationship between the two instruments. The horn often emerges out of the sound of the harp and vice versa, creating the impression that the two instruments are just one. Distant Bells begins with a chime, and the piece increasingly becomes denser as time progresses to a climactic moment of harp clusters. The energy built throughout the piece dissipates to the end.

What was most rewarding about this project?
Definitely being able to work with Jens [McNamana], and Valéria [Kafelnikov] and talk to them for extended amounts of time about the piece and different extended techniques for their instruments. I learned so much from the process of creating this piece from these conversations!

And the most challenging?
Experimenting with the balance of the two instruments. Jens and I tried out many different mutes to see which colors would complement the harp and what might end up overpowering it.

How will your work change going forward as a result of this experience?
I’ll send snippets of music to my collaborators throughout the process so that we can both participate in the development of the music, really giving myself the time and space to edit ideas.

>This summer, fourth-year composition student Hannah Ishizaki worked on expanding a project she’d started with a Juilliard dancer and transforming it into a theatrical, evening-length dance work for the sounds of dancers.

Tell us about your piece.
When I decided on a piece for solo horn, I knew I wanted to write something that took advantage of the richness of the instrument—that would sound best in a spacious, resonant environment. I took inspiration from the rooms and courtyard of the Isabella Stewart Gardner Museum in Boston, which exactly matched the musical character I was aiming for. The concept of transforming an everyday living space into a meticulously arranged, permanent collection of art stayed in my mind throughout the writing process on An Open Room in Fenway Court.

What was most rewarding about the process?
I had just finished a large orchestral work, so this project was the perfect opportunity to write something on a smaller scale as a kind of palate cleanser. I’d been interested in writing something that really deeply explored the capabilities of the horn, too, and it was extremely gratifying to do that with such an experienced and insightful soloist [Jens McManama].

How will your work change going forward?
Writing for an unaccompanied instrument that requires pauses in the music for the performer to breathe forced me to think about structure in a way I would never have to if I were writing for an ensemble. When you have to include silence in a piece that you want to be slower-paced and expansive-sounding, how do you prevent it from turning into a string of unrelated phrases with pauses in between? Answering that question taught me a lot about pacing and direction in a very short span of time, and I’ll be carrying those lessons into my future projects.

>This summer, second-year master’s composer Matthew Schultheis gave a guest lecture to the National Youth Orchestra’s composition apprentices at SUNY-Purchase and took part in virtual rehearsals for the Tokyo Symphony’s world premiere of his Columbia, in Old Age under Matthias Pintscher at the end of August.

Tell us about your piece.
Honestly, my piece (The Broken Contract) was inspired by ourselves. I’m originally from Puerto Rico, but when I came to the mainland U.S., I tell my friends that I noticed for the first time that I was brown. But, it doesn’t stay there. Our dear America has never let me forget that. Then I saw the Black Lives Matter movement and the MeToo movement, in contrast, quite honestly, with the 45th president of this country. All this, together with my own experiences of being spat at, threatened with being burned, physically attacked, etc., made me question many things about myself: some healthy, some not so much. And, if I’m candid, I developed an inner pain that was very hard to define or even identify. Then, on YouTube, I stumbled upon both the words of James Baldwin and Kimberly Jones, and from there on, everything just erupted onto the paper. The Broken Contract really helped me identify and work on the pains that I accumulated every time I looked into the mirror. And it gave me the ability to share it while encouraging me to keep going.

What was the most challenging aspect of the project?
The emotional aspect of writing the piece was the most challenging, followed by the extreme fear of “what would white performers think? Am I destroying my career expressing something so real and personal?” Fortunately, I had enough support from my husband, my mentor, and my colleagues to just do it. But, if you were expecting me to say that the remote aspect of the project was challenging, well, at least in my case, it was fabulous—five stars.

And the most rewarding?
Many things! Working with Valéria Kafelnikov (harpist) was definitely a highlight, more so because she understood the piece and where it was coming from. As corny as it might sound, she played her heart out, and it was an incredibly moving performance. Knowing that, even with all my fears, The Broken Contract can be heard by anyone and everyone online is incredibly rewarding. And, hey, it’s recorded! By the Ensemble Intercontemporain! How much more rewarding could you get?

What will you change going forward?
I’ll pay more attention to my gut. Even when it becomes frightening. There are moments when I feel that what I write carries a very delicate piece of my being, like a blown glass figurine. I find myself wanting to share those pieces, but fear they will fall or be thrown on the floor and break, thus breaking myself. But this experience has taught me that vulnerable moments like that are appreciated and respected. And if you’re truly honest, people will take that little figurine, appreciate it even if they don’t particularly like it, and treat it with care. In the end, we do what we do because we need to share something we believe is beautiful, meaningful, moving, or just plain cool.

>Doctoral student Iván Rodriguez spent the summer finishing a Lövstabruks Kammarmusikfestival commission for guitar and string quartet, working with the Boston Opera Collaborative on an art song in reaction to Schumann’s Dichterliebe, completing a Christmas commission for chorus and orchestra, and working with White Snake Projects on an art song with text by inmates incarcerated in the U.S. Additionally, his Transmutación Inerte was recorded by the Victory Players and he had a performance of his work by the World Youth Symphony Orchestra, conducted by Christian Reif (MM ’14, orchestral conducting) at Interlochen.