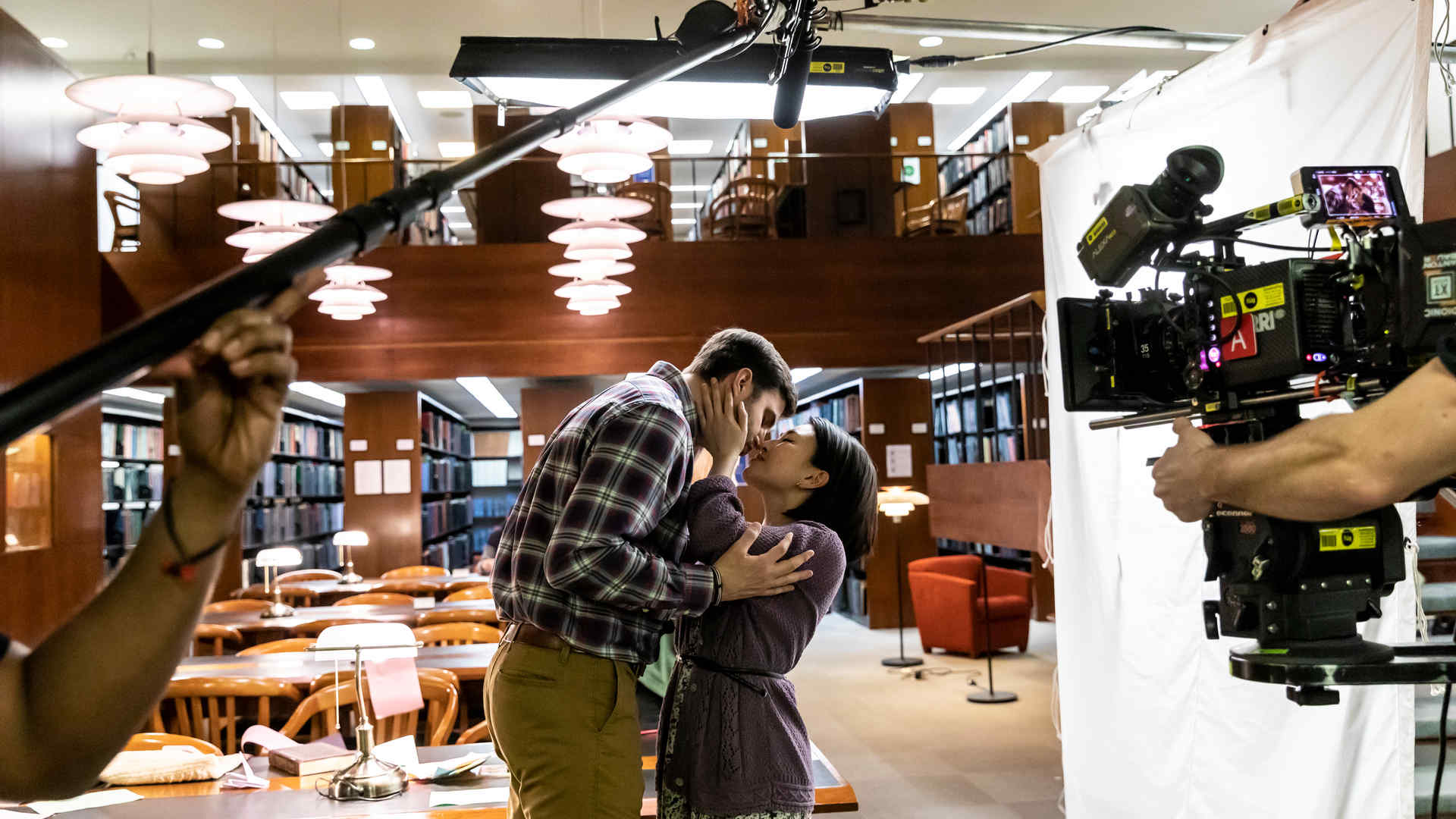 Miles Jacoby and Lennox T. Duong in 'The Library'; filmed in the Juilliard library

The Drama Division has embarked on a new programming initiative to provide the graduating actors with practical experience working on camera. Building on the success of the filmed plays produced in spring 2021, which were born of necessity and captured in a COVID-safe bubble, this year the division has commissioned and produced three short films. Written by alumni from the Lila Acheson Wallace American Playwrights Program and realized by professional directors and production teams, these projects complement the opportunities the actors have had on our stages and better prepare them for the field as it will exist for them upon graduation.

Working on these films, each of which had three shooting days, offered the fourth-year actors an opportunity to experience the work rhythm, dynamics, and practices of professional film production in a creative and supportive environment. Their work was supported by all their training to date, a class in Acting on Camera taught by faculty member Bob Krakower, and a workshop given by Laura Linney (Group 19; trustee) on the nuts and bolts of being on set.

Evan Yionoulis, who’s the Richard Rodgers dean and director of the division, asked a few of the actors about their experiences.

How did your training prepare you for work on these films?
Blake Russell: What makes a film set or an orchestra or a dance company great is the sum of its parts—people working at their best who come together to build something greater. Did the training here prepare me for that? More than I can know.

Arianna Gayle Stucki: Surprisingly, the time we had training on Zoom and the recording we did for Zoom projects demystified many of the technical aspects of being on a film set: I understood the need for several takes and was more physically ready for the process of repeating one scene quite a few times for the “one take” you’re looking for.

Miles Jacoby: Our on-camera class was hugely impactful. What’s great about Bob Krakower is that his technique builds upon language and concepts we use in other classes—the same basic principles of sending and receiving, of really listening to your scene partner and pursuing an underlying need, still apply. You also still need to figure out what is the story or main event of the scene; what changes from beginning to end. The major difference for film is that you then have to put that story into behavior.

Arianna: Our work with Bob aided me in understanding the size of truth that a camera can pick up. So I knew that vocally I could be a little quieter or that my eyes could do the storytelling work in a closeup that maybe a full-body movement/gesture would be doing on a stage.

What did you discover on set?
Blake: We’re approaching graduation and our heads are spinning with agents and casting and auditions. Bob reminded us that these short films are for our education, not for the industry, and reminded us to learn what we needed in this process. I learned that sleep is the most important piece for me. We were called at 5am, a car was picking me up at 4am, and I know that I need about an hour to actually wake up, so that’s a 3am wake-up—and if I wanted eight hours of sleep, I needed to go to bed at 7pm. This level of personal planning helped me show up at my best every day.

Miles: There is both a lot more freedom and more structure in film acting. In a play, you spend your rehearsal process narrowing down all the possibilities of what can happen in a scene in order to best tell the story so it is repeatable every night. In film, you still need to know what the story is, but it’s your job to present the editor with multiple choices for how a scene can go. The freedom definitely took some getting used to. But once we had a master shot, there was a high level of specificity and repeatability required. Let’s say you picked up a cup at a certain point in the master shot, then you had to pick up that cup at the same time in every subsequent medium and closeup shot so that the scene would cut together. In scenes with a lot of movement or prop work, this required a ton of precision.

Arianna: I was surprised by how easy it felt—credit goes to our director, Michelle Bossy, for cultivating such a fun environment to work in. It felt like how I feel for a good audition—one I’m prepared for. That is, I’m memorized, I’ve thought through the circumstances of the story and scene, I’ve personalized it. But I’m also ready for a director to play with me and ask for a few different versions or takes of the scene. I’m ready to put a couple of different spins on it, and let go, and not be too precious. That’s how almost every second of filming felt to me. I loved it!

Is there a moment from filming that sticks with you?
Miles: We have this moment where a fan blows a bunch of letters around the library. You would not believe how many fans, vents, leaf blowers it took to make this happen, not to mention the number of hands manning all of these contraptions, in addition to dropping more letters from the balcony above. So many departments collaborated to make this moment of movie magic.

Blake: I will never forget the hurricane of organized chaos right before the director calls action. The cinematographer calling out to the AD, gaffers adjusting lighting, prop master refilling glasses, script supervisor reminding me when I should take a drink as hair and makeup gives me a touch-up. Then silence. The snap of the clapperboard. And then— action! There’s nothing like it.

Arianna: We were filming in Juilliard’s library, which has some pretty old wiring. Unfortunately, toward the end of our last filming day (around midnight), someone mistakenly turned off the overhead lights—and after flipping the switch they weren’t turning back on. We couldn’t film the final takes without having the lighting match the rest of the film. We all stood there in suspense as someone called [Juilliard librarian] Jane Gottlieb at 12:30am. Luckily, it turned out the lights just take 10 or 15 minutes to warm up, so eventually they each flickered back on. We were able to get it all done.

What will you take away from this process?
Arianna: I’ve always been afraid of film, and valued theater over it, but this experience has truly changed my mind on its value and accessibility. Film is capturing a live event between actors; and the intimacy one can achieve with the medium—the intimacy that is felt on a set between the actors, the director, the cinematographer, and the sound artists—is a really tender and beautiful thing. I was surprised how close I felt to this group after only three days of working. I can’t wait to work with more cameras in the future.

Miles: Not only do I want to do more film, but I also feel way more prepared to step onto my next film set.

Blake: Acting on camera is a different beast that I’m excited to tame.

The Extenders by Eboni Booth (Playwrights ’20), directed by Derrick Sanders, associate director of the Drama Division
On New Year’s Eve in a not-too-distant future, a group of friends—with the help of revolutionary technology—reunites after one of them has died. A story about friendship, loss, and reanimation.

The Library by Adam Szymkowicz (Playwrights ’07; playwrights program manager), directed by Michelle Bossy
Running a library is a serious matter. It isn’t just falling in love.

Variations by Tony Meneses (Playwrights ’19), directed by Mike Doyle (Group 27)
It’s date night at a local restaurant. With the help of a creative bartender, everyone tries to find the perfect pairing.