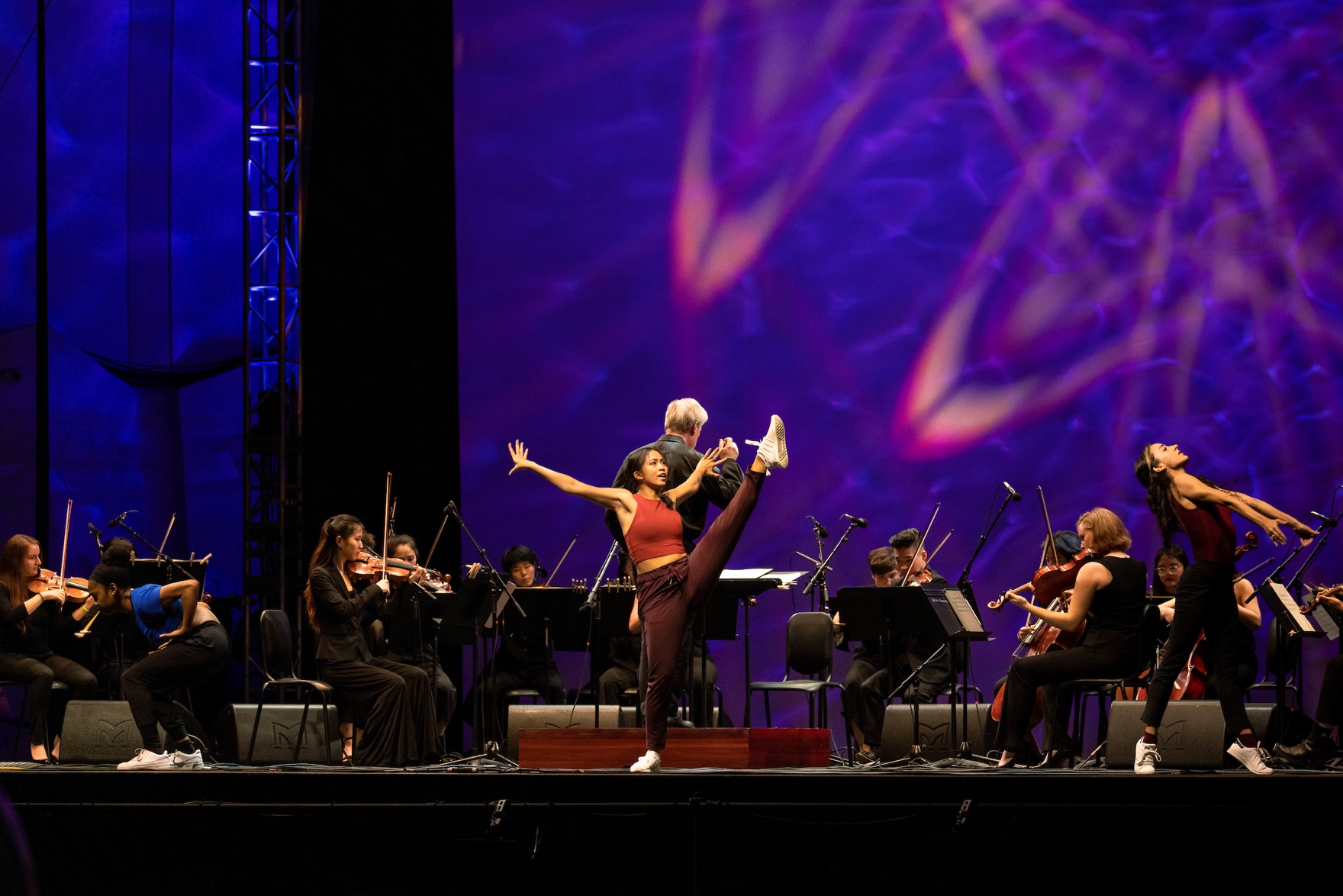 NEW YORK––Juilliard announces additional details for a new presentation series with four offerings in the second semester of the 2022-23 school year. Named The New Series, it will include four to six presentations each academic year and will feature collaborations among guest artists and creators, alums, and students from Juilliard’s music, dance, and drama divisions. The series will combine these interdisciplinary creative forces to broaden the experience of both students and audiences. This year’s The New Series events take place January 19, February 6, March 30, and April 13, 2023.

The New Series is conceived and directed by composer and dean and director of Juilliard’s Music Division, David Serkin Ludwig, who serves as the program’s artistic director. The New Series builds on the school’s commitment to contemporary music while engaging students from the dance and drama divisions in addition to its musicians.

“The New Series represents the best of what Juilliard has to offer, through collaborations that include performing artists from multiple disciplines presented at the highest level,” says Ludwig. “As we invest creatively in the music of our time, we have the opportunity to explore new and expansive ideas in a variety of formats. Through these explorations, we as a community nourish our passion for this art form by keeping both our excitement about and reverence for it alive.”

The series debuts on January 19 with a double bill of Igor Stravinsky’s classic L’histoire du soldat and Wynton Marsalis’s take on Stravinsky’s work in his A Fiddler’s Tale, written 80 years later. The program brings together students from the music, dance, and drama divisions in a retelling of the Faustian legend of someone making a deal with the devil to sell their soul (or violin, in this case) for fame and fortune, and the ultimate consequences of giving up the power of their art. David Robertson, director of conducting studies, conducts Stravinsky’s L’histoire du soldat (A Soldier’s Tale) paired with Marsalis’ A Fiddler’s Tale. Marsalis’ work “reacts” to Stravinsky’s classic chamber work in a 20th-century reworking of the tale that swings through New Orleans jazz, Dixieland, blues, ragtime, and the Charleston. The cross-genre event is directed and choreographed by Larry Keigwin, who directed the virtual presentation Bolero Juilliard, which brought together more than 100 dancers, musicians, singers, actors, faculty, and alumni from locations around the globe in an award-winning project created in the early days of the pandemic quarantine.

February 6 brings a first-ever live collaboration between the students at Juilliard’s two campuses—in New York City and Tianjin, China. Students will perform Terry Riley’s iconic work In C together via Juilliard’s Center for Innovation in the Arts with recorded video of Juilliard dance students. In C, considered one of the original pieces of minimalism, is written for no specific instrumentation and with no time signature or assigned parts. In place of more traditional notation, this one-page piece offers 53 short motifs that can be played by any instrument or combination as players follow each other over the course of an hour through the score. Every performance of Riley’s seminal composition is a unique rendition of the work. The February 6 event marks the first such real-time collaboration between both Juilliard campuses and music students, bridging a distance of 7,000 miles to create a single performance experience.

The March 30 concert program features chamber works composed by alumna Reena Esmail, one of the most sought-after artists of our time who builds bridges between Hindustani and American classical music. Among the pieces to be performed are Blaze, The light is the same, Saans, Who makes a clearing, and Meri Sakhi Ki Avaaz (My sister’s voice). Additional details will be announced closer to the performance date. While this performance takes place at Juilliard, it is offered in collaboration with Carnegie Hall’s season-long exploration of women’s contributions to the world of music.

The New Series concludes its first season on April 13 with the culmination of composition faculty member Amy Beth Kirsten’s class, Théâtre Etudes, featuring new and experimental works by students that incorporates movement, voice, and multimedia to create a new musical performance practice. Additional details will be announced closer to the performance date.

Each concert in the series will include pre- and post-concert talks and Q&As with Ludwig and collaborating guest artists.

Please refer to the Performance Calendar at juilliard.edu/calendar for the most up-to-date livestream schedule.

In C is sponsored by Bank of China U.S.A.

Juilliard's creative enterprise programming, including The New Series, is generously supported by Jody and John Arnhold.

Bloomberg Philanthropies is the lead digital sponsor of Juilliard.

About David Serkin Ludwig
Composer David Serkin Ludwig has enjoyed a career of collaboration with many of today’s leading musicians, filmmakers, and writers. In 2022, Ludwig was awarded the Stoeger Prize from the Chamber Music Society of Lincoln Center, the largest chamber music award of its kind. He received the prestigious 2018 Pew Center for the Arts and Heritage Fellowship, the Independence Foundation Fellowship (two-time recipient), the Theodore Presser Career Grant, and the A. I. duPont Award. In 2012, NPR named Ludwig in the “Top 100 Composers Under 40 in the World”. The next year his choral work The New Colossus opened the private prayer service for President Obama’s second inauguration. He holds positions and residencies with nearly two dozen orchestras and music festivals in the U.S. and abroad, and he was named a Steinway Artist in 2021.

Ludwig, an alumnus of Juilliard (Graduate Diploma ’02, composition), was formerly at the Curtis Institute of Music, where he served as dean of artistic programs, chair of composition studies, director of Ensemble 20/21, and artistic director of Curtis Summerfest. He also holds degrees and certificates from Oberlin Conservatory, Manhattan School of Music, and Curtis as well as a PhD from the University of Pennsylvania. Ludwig also studied at the University of Vienna, and he taught at Cheyney University of Pennsylvania while attending Juilliard.

Ludwig was appointed dean and director of music at Juilliard in 2021 where he serves on the faculty and is the artistic director of Juilliard’s collaborative contemporary music project The New Series. He lives in New York City with his wife, violinist Bella Hristova, and their four beloved cats.

About The Juilliard School
Founded in 1905, The Juilliard School is a world leader in performing arts education. The school’s mission is to provide the highest caliber of artistic education for gifted musicians, dancers, and actors, composers, choreographers, and playwrights from around the world so that they may achieve their fullest potential as artists, leaders, and global citizens. Juilliard is guided in all its work by the core values of excellence; creativity; and equity, diversity, inclusion, and belonging (EDIB).

All programs will be livestreamed at juilliard.edu.

Tickets: $30. Available at the Juilliard box office and at juilliard.edu.

A live collaboration between Juilliard’s New York and Tianjin campuses with musicians simultaneously performing Terry Riley’s minimalist masterpiece In C featuring Juilliard’s Center for Innovation in the Arts. The performance features prerecorded videos of students from the Dance Division.

This performance is part of Carnegie Hall’s Women in Music, a season-long exploration of the many contributions that women have made to the world of music.