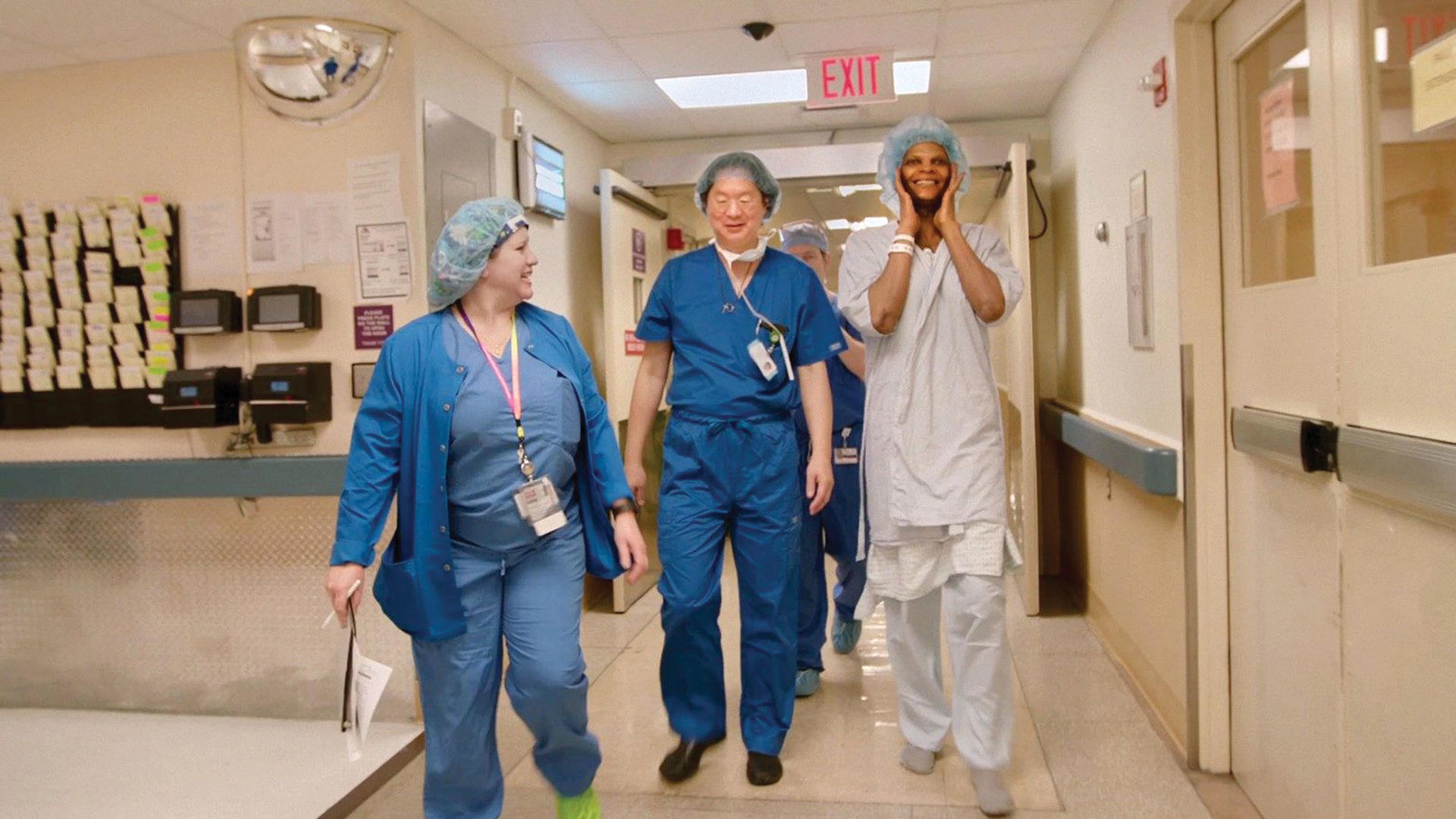 Surgeon and Juilliard alum Jess Ting, center, in Tania Cypriano's documentary 'Born to Be,' which premiered this fall

Born to Be, a documentary by Tania Cypriano, had its world premiere screening in late September at Film at Lincoln Center, just across 65th Street from Juilliard, as part of the New York Film Festival. The film introduces viewers to five patients of the Mount Sinai Center for Transgender Medicine and Surgery (CTMS) in New York City—and their doctor, surgeon Jess Ting (Pre-College ’82; BM ’88, MM ’90, double bass). The film’s opening scene, a close-up shot of Ting as he practices the double bass, evokes the surgeon’s start as a musician.

“You’re tall, you play the bass,” Ting recalled of his seventh grade orchestra teacher’s rationale in assigning the instrument to him, “and I just loved it—I really loved it.” Ting’s brother took him to Sam Ash in midtown to buy a $300 used bass, which they drove home to Jackson Heights, Queens, with the neck sticking out the car window. The family of four children—Ting was the youngest—and their single mom didn’t have money for a music teacher, so Ting would borrow sheet music from the public library and, with the help of a recording, “just figure it out,” he said in a recent interview with the Journal. A self-taught player, he got into the New York Youth Symphony, and Stanley Hall (’81, double bass), an occasional bass section ringer with the group who at the time was a Juilliard undergrad, offered to arrange for Ting to have a lesson with Homer Mensch (faculty 1970–2005). Mensch encouraged Ting to apply for Pre-College, which he attended on scholarship and then continued for his bachelor’s and master’s at Juilliard.

As he approached the end of his master’s, though, Ting struggled to find orchestra jobs—at least “in any place where I’d want to live,” he said. While holding down a full-time job at an insurance company, he took med school prerequisites, ultimately following in the footsteps of one of his brothers—a vascular surgeon—and applying to medical school. He attended Columbia University College of Physicians and Surgeons and he received his general surgery training at Columbia-Presbyterian Medical Center.

In the film, the camera follows Ting through Mount Sinai’s halls and in and out of consultations and surgery with his patients, who represent a diverse cross-section of the trans community. Among them is Cashmere, a woman seeing Ting for surgery to correct botched facial implants she got years ago, when such facial feminization procedures were done on the black market with sketchily sourced silicon or even motor oil. And there’s Garnet, who’s in her early 20s and one of the first patients to undergo a new type of vaginoplasty, a male-to-female genital reassignment surgery, which as a result of Ting’s innovation makes use of flesh from inside the abdominal cavity.

In 2015, monumental legislation by New York State provided for the first time for health insurance coverage of “transgender related care and services.” In the wake of that decision, Mount Sinai established its transgender surgery center. At the time, Ting was working at Mount Sinai as a plastic surgeon specializing in breast reconstruction, and he was chosen to head up the program because, he says in his characteristic deadpan, “everyone else said no—except for me.” At that point, Ting had never performed a sex reassignment surgery, but in the spring of 2016, he led Mount Sinai’s first vaginoplasty.

The documentary cites a particular statistic that has motivated Ting’s passionate subsequent focus on the trans population: 44 percent of transgender patients attempt suicide at some point in their lives. In some cases, patients who have struggled with depression and gender dysphoria attempt suicide while on the waiting list for gender-affirming surgeries, a statistic heartbreakingly attested to near the end of the film, when one of Ting’s patients attempts suicide. But increasing social acceptance and awareness offer hope to the next generation. “More kids are coming out and having treatment younger and younger,” Ting said. Unlike Cashmere, who had to wait until her 50s for safe and effective surgery, “the next generation will be able to do it much younger and not have to suffer for so long.”

Ting’s bass maintains a place of prominence in the center of his Upper East Side apartment’s living room—lying on its side, ready for practice. These days, he plays to unwind after weekdays that typically consist of two surgeries, the first often beginning as early as 7:30am.

While classical music might seem to be an unlikely start for a physician, Ting likens his medical practice of performing and perfecting a surgery to that of a soloist revisiting a piece of repertoire. Reflecting on qualities common to doctors and artists, he points to determination, efficient work habits, and perseverance. Following his conversation with the Journal, he emailed to mention yet another characteristic: idealism. “I think idealism is more prevalent among Juilliard graduates then graduates of, say, a regular undergraduate school. Idealism and the desire to do something that benefits the greater good. After all, isn’t that something that all performing artists strive for?”

Born to Be, which screened at the New York Film Festival this fall, is exploring distribution

Joshua Simka (BM '14, voice) is the assistant editor of the Journal