Performing before a live audience is one of the most valuable aspects of a Juilliard education, and here at the School, the opportunities to do so are abundant. Our young artists participate in nearly 700 Juilliard-sponsored performance activities presented annually in music (solo, chamber, orchestral, jazz, contemporary, and opera), dance, and drama, many of which are offered free of charge to the public.

Most performances take place in one of Juilliard’s main performance spaces: The Peter Jay Sharp Theater, Paul Recital Hall, Morse Hall, and the Rosemary and Meredith Willson Theater, but our students also regularly appear at other major New York City venues including Carnegie Hall, where the Juilliard Orchestra gives annual concerts; the Blue Note Jazz Club, where Juilliard Jazz enjoys regular gigs; and at Lincoln Center’s Alice Tully Hall, where the school’s popular Wednesdays at One series and other performances take place each year, and David Geffen Hall, home of the New York Philharmonic.

View a slideshow of Juilliard musicians performing in a variety of environments and venues. 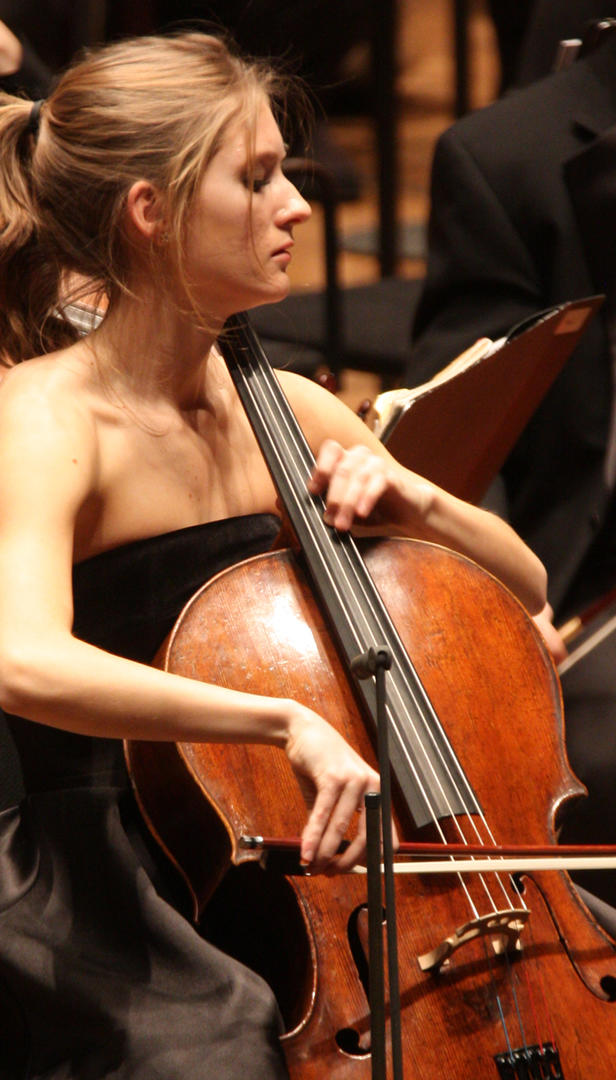 Juilliard's performing orchestral ensembles give more than 30 concerts each season at Lincoln Center in Alice Tully Hall, the Peter Jay Sharp Theater, and David Geffen Hall, as well as in Carnegie Hall and other venues around New York City. Participation in these ensembles provides a solid foundation for instrumentalists hoping to join professional orchestras. In fact, numerous Juilliard alumni have become first-chair players and section members in orchestras in both the United States and abroad.

All undergraduates begin their orchestral studies with Orchestra Orientation, a three-week orchestra cycle comprised of seminars, workshops, and rehearsals designed to prepare students for the rigors of the Juilliard Orchestra. Led by Maestro David Robertson, the Orchestra Orientation also calls upon Juilliard faculty and members of the New York Philharmonic and Metropolitan Opera Orchestra to lead discussions, coach sectionals, and play in side-by-side rehearsals.

The Juilliard Chamber Orchestra (J.C.O.) works without a conductor using a shared leadership model. Musical decisions are made by the players, with guidance from the coaches. J.C.O. explores all the roles that a conductor normally plays, and as a group discusses how best to divide those responsibilities. It is the goal that each participant will come away from the experience with new respect for a conductor’s role, and with a new insight into what each player can do to expedite the rehearsal process and make performances better. Lead coach Eric Bartlett is a 32-year veteran of the Orpheus Chamber Orchestra and a member of the New York Philharmonic since 1997.

The Wind Orchestra, provides an opportunity to study and perform important staples of the wind repertoire, including such masterworks as the Beethoven Octet in E flat Major, Op. 103, Strauss Serenade in E flat for 13 winds, Dvořák Serenade, Op. 44, and Stravinsky Octet. Each cycle is conducted by a Juilliard woodwind faculty member or prominent performer, such as oboist Elaine Douvas, bassoonist Patricia Rogers, and clarinetist Anthony McGill.

The Lab Orchestra is conducted by students of the Orchestral Conducting program under the supervision of David Robertson, and gives both the student conductors and student musicians the opportunity to learn major works of orchestral repertoire while working each week with Maestro Robertson and/or special guests. It typically meets weekly on Friday mornings and performs once each semester.  Because participation in Lab is voluntary and requires a major time commitment beyond regular orchestral studies, members are paid a small stipend through the student work-study program. 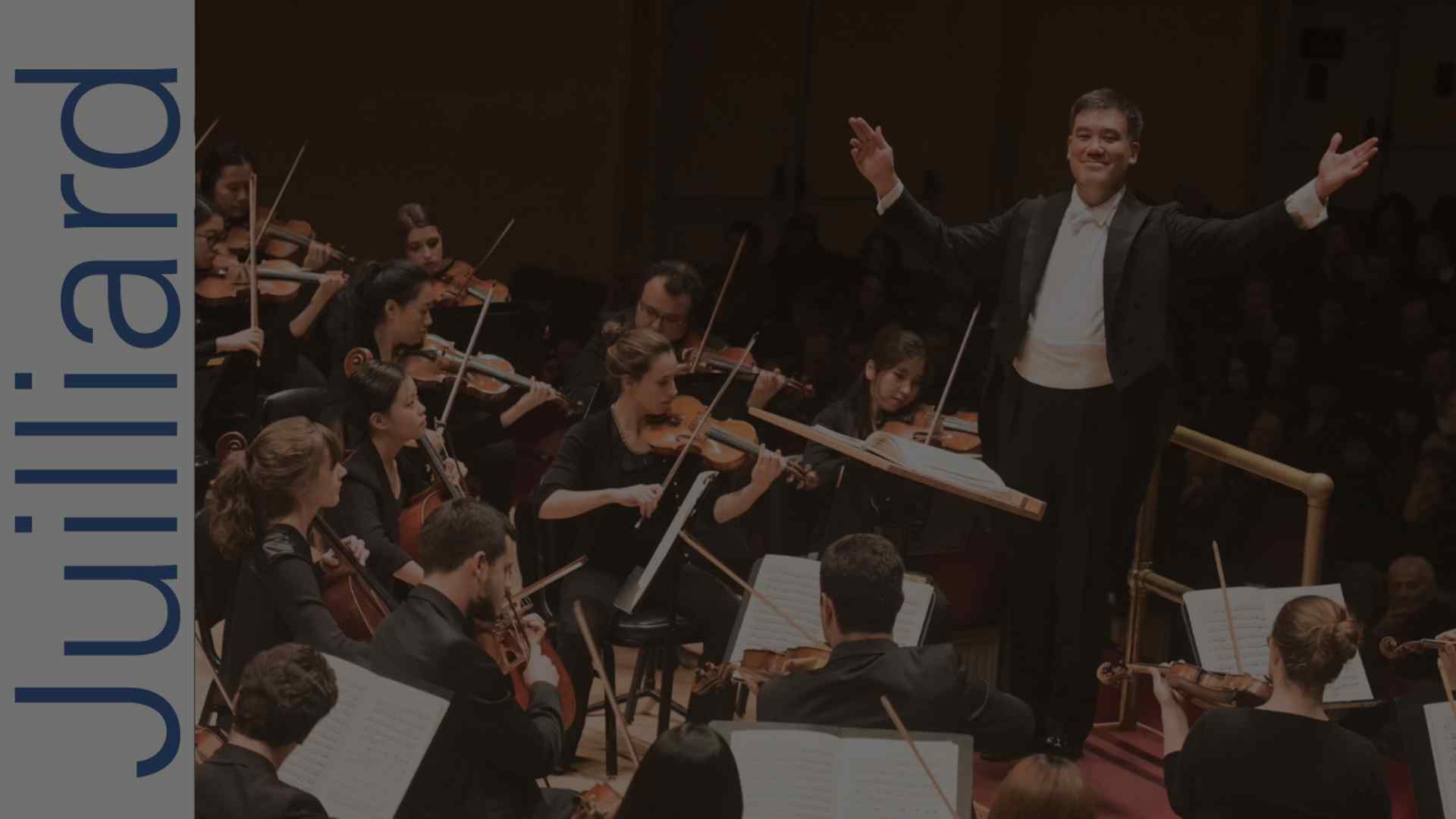 Founded and directed by faculty member Joel Sachs, the New Juilliard Ensemble (N.J.E.) is the school's chief proponent of recent music. A chamber orchestra consisting of 13 to 30 performers, it offers two concerts each semester that feature works of the last 10 years, along with some rarely performed major compositions of the post-World War II period. Most performances are premieres, and an increasing number of works are being written for the ensemble by composers around the world, as well as by Juilliard student composers. Participation is voluntary, and participation is by audition.

Members of N.J.E. also participate in the annual Focus! festival, which takes place in late January. Founded and directed by Joel Sachs, Focus! offers an immersion in a different topic in the history of modern music. These may be an exploration of the music of a single composer (such as Elliott Carter or Alfred Schnittke), a geographical region (Latin America, Japan, Poland), or a period of time (American mainstream composers of the last century). The festival comprises solo, chamber, and orchestral music.

Conducted by faculty member Jeffrey Milarsky, AXIOM is dedicated to performing masterworks of the 20th and 21st centuries. Since its debut performance in Avery Fisher Hall in February 2006, the group has established itself as a leading ensemble in New York City’s contemporary music culture with performances in Lincoln Center and throughout New York City. Participation is voluntary, and auditions are held on a case-by-case basis.

An intensive year-long program for string trios, string quartets, piano trios, and piano quartets. Up to four participating groups will work with assigned chamber music faculty, are expected to maintain a significant amount of regular rehearsal time, and will participate in the Joseph Lin Studio Class. Three required public performances will take place in October, mid-spring semester, and in April. Students will explore their repertoire further through a written, oral, or cross-disciplinary project. Groups will receive priority consideration for placement into Chamber Music Society of Lincoln Center master classes, Wednesday at One concerts in Alice Tully Hall, and other chamber music opportunities.  By audition only.

Student musicians form their own groups and work with faculty coaches in regular coaching sessions that culminate each semester in performances around the building and beyond. In addition to standard groupings such as string quartets, piano trios, and brass and wind quintets, we offer a wide variety of chamber music opportunities — including improvisation; vocal chamber music; coaching with members of the composition faculty; Classical repertoire with fortepiano; Baroque repertoire with the Historical Performance faculty; harp, guitar and wind groups; and other repertoire-specific ensembles.

In January, the annual ChamberFest program allows 20 chamber groups a week of intensive non-credit work on repertoire of their choice before the second semester begins. Each group receives a rehearsal studio for the week and eight hours of coaching from the faculty. ChamberFest ensembles give public performances at Juilliard in a series of concerts during the first week of the second semester.

The Artist Diploma in String Quartet Studies enables an already established string quartet to move from serious study of the repertoire toward a professional career as a teaching and performing quartet. 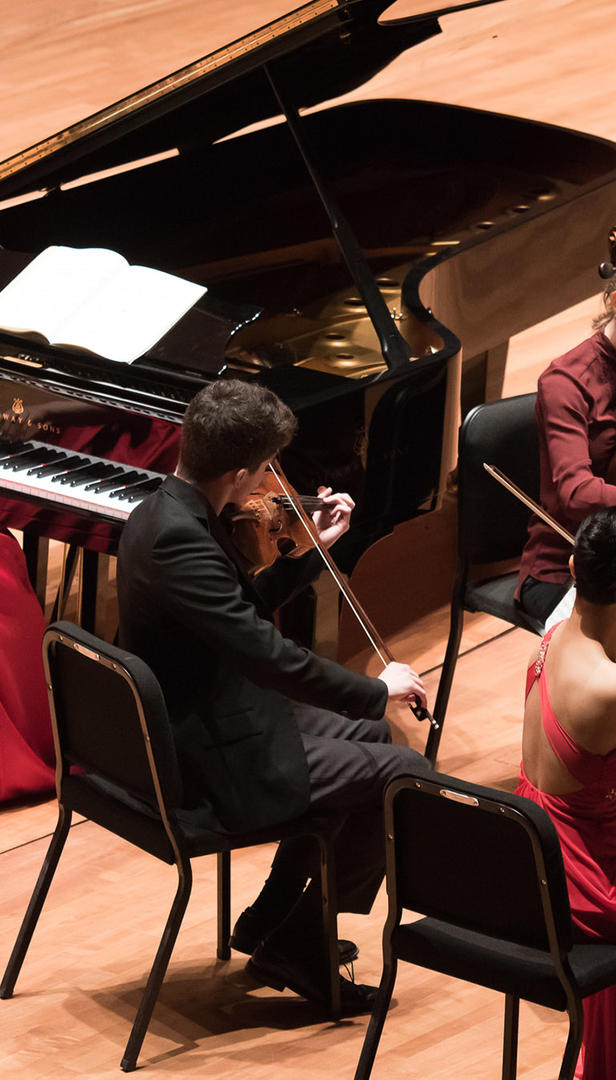 Participants in the Harp, Guitar, and Winds class study mixed chamber music repertoire in weekly classes with flute faculty member Carol Wincenc. Groups in the seminar perform at the end of each semester

All first-year and transfer undergraduate violin, viola, and cello students are required to audition for the String Quartet Survey class at the beginning of the fall semester. Quartets will be formed by the course instructor, a former member of the Juilliard String Quartet. Participants in the class have weekly rehearsals and coaching sessions, and study four quartets over the course of the year, including a quartet by Mozart, Haydn, Beethoven, and more recent repertoire. Specific guidelines and grading procedures are outlined by the faculty coach at the beginning of the year.

Co-taught by violinist Catherine Cho and cellist Natasha Brofsky, the Chamber Music and Community Service Seminar is open to up to four chamber groups committed to a yearlong exploration into harnessing the power of music as an agent for change in our local community. Selected by application and interview, each group of two or more musicians of any instruments must – in addition to participation in the seminar – be simultaneously registered for one year of independent coaching with a chamber music faculty member. The class will comprise eight seminars over the course of the academic year, during which the groups will work with the faculty and invited guests to develop and refine a project of their own choosing. Possible projects include an educational collaboration with a local public school; a performance series in a senior center, art gallery or homeless shelter located in an underserved community; or a benefit concert for a charity of choice, among others. Through engagement with the local community, students will learn the necessary personal and entrepreneurial skills involved in creating and publicizing their work. 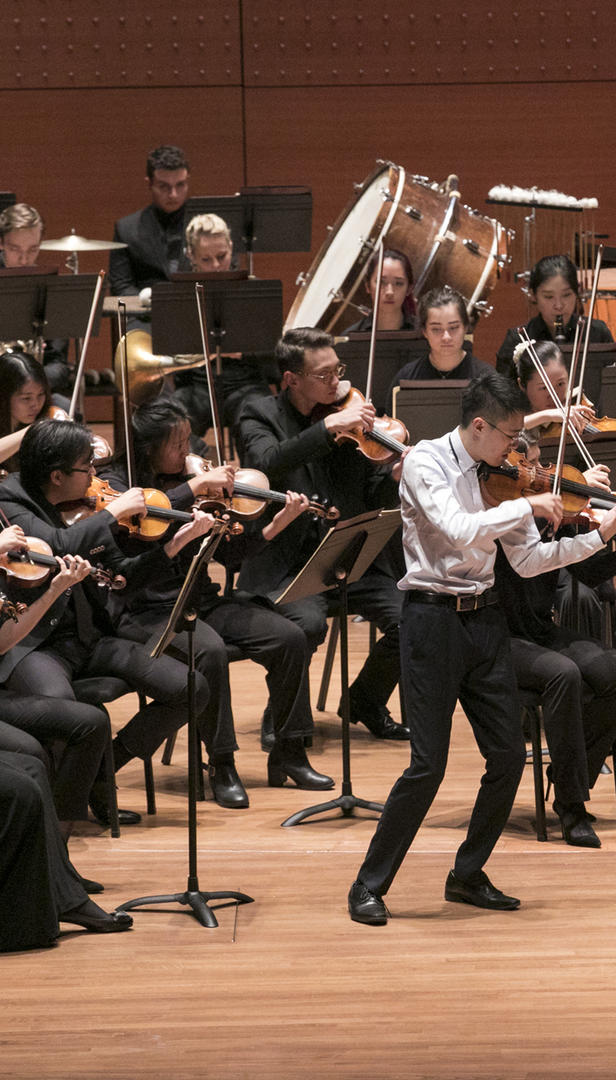 As a music student at Juilliard, you have the chance to be a concerto soloist for performances in the Peter Jay Sharp Theater or Carnegie, David Geffen, or Alice Tully Halls. Each year student soloists are selected by competition for concerto performances with the Juilliard Orchestra. Approximately 8 competitions take place throughout the season; there are annual competitions for piano, violin, viola, and cello; other instruments are rotated. Winners perform with the orchestra in the Peter Jay Sharp Theater, Alice Tully Hall, or David Geffen Hall. 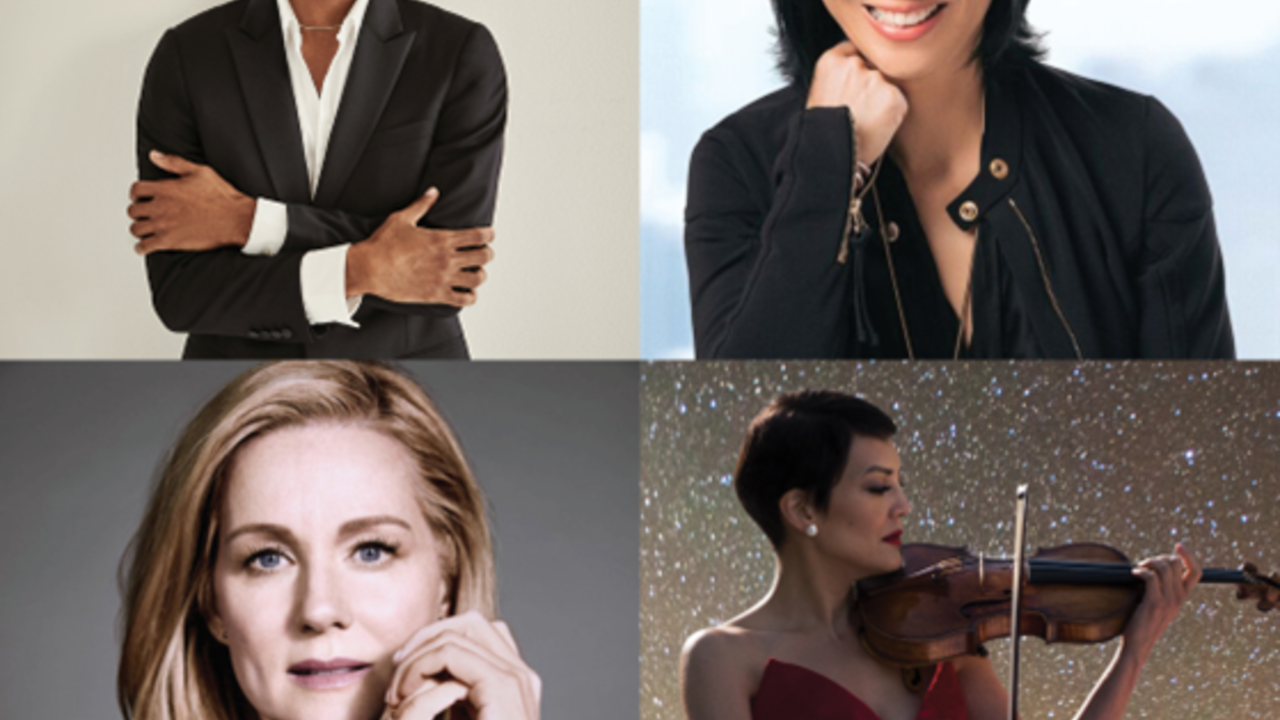