Emmanuel Villaume Conducts the Juilliard Orchestra in Works by Ravel and Debussy on Monday, December 4, 2017, at 7:30pm in Alice Tully Hall

On putting together the program, Maestro Villaume writes: “We wanted to do a program with the Vocal Arts students, and I also wanted to work in detail with the orchestra, but we didn’t have time for both a full orchestra and an opera production. So, the Ravel L’enfant et les sortilèges was an obvious choice because it has a huge cast of singers, and it works well in concert – it doesn’t necessarily need staging. It’s also a piece that’s very dear to me; it’s sometimes totally silly and nonsensical, but it speaks about the reality of our fears of the immense tenderness and cruelty within us. La mer is a great contrast; there are no words, but there are so many images that are very strong, and it’s a marvel of orchestration.”

On the international stage he has appeared at Covent Garden, Montreal Opera, Tokyo’s Bunka Kaikan, Buenos Aires’ Teatro Colón; Paris’ Bastille Opera, and is a frequent guest artist with Opéra Marseilles, Bayerische Staatsoper, Deutsche Oper Berlin, Hamburg Staatsoper, and Venice’s Teatro La Fenice, among many others. In North America, he has conducted the Quebec Symphony, Montreal Symphony in both Montreal and at Carnegie Hall, the Chicago Symphony, and Los Angeles Philharmonic. He has also led the San Francisco Symphony, Houston Symphony, and the Boston Symphony at both Symphony Hall and the Tanglewood Festival.

Born in Strasbourg, Emmanuel Villaume studied music at the Conservatoire de Strasbourg. He continued his education at Khâgne and the Sorbonne in Paris, where he received degrees in literature, philosophy, and musicology.

About the Juilliard Orchestra

Juilliard’s largest and most visible student performing ensemble, the Juilliard Orchestra, is known for delivering polished and passionate performances of works spanning the repertoire. Comprising more than 350 students in the bachelor’s and master’s degree programs, the orchestra appears throughout the season in concerts on the stages of Alice Tully Hall, David Geffen Hall, Juilliard’s Peter Jay Sharp Theater, and Carnegie Hall. The orchestra is a strong partner to Juilliard’s other divisions, appearing in opera and dance productions as well as presenting an annual concert of world premieres by Juilliard student composers. Under the musical leadership of Alan Gilbert, the director of conducting and orchestral studies, the Juilliard Orchestra welcomes an impressive roster of world renowned conductors this season, including Mr. Gilbert, Joseph Colaneri, Lin Chen, Jeffrey Milarsky, David Robertson, and Speranza Scappucci. The Juilliard Orchestra has toured throughout the U.S. and Europe, South America, and Asia, where it was the first Western conservatory ensemble allowed to visit and perform following the opening of the People’s Republic of China in 1987, returning two decades later, in 2008. Other ensembles under the Juilliard Orchestra umbrella include the conductorless Juilliard Chamber Orchestra, the Juilliard Wind Orchestra, and the new-music groups AXIOM and New Juilliard Ensemble. 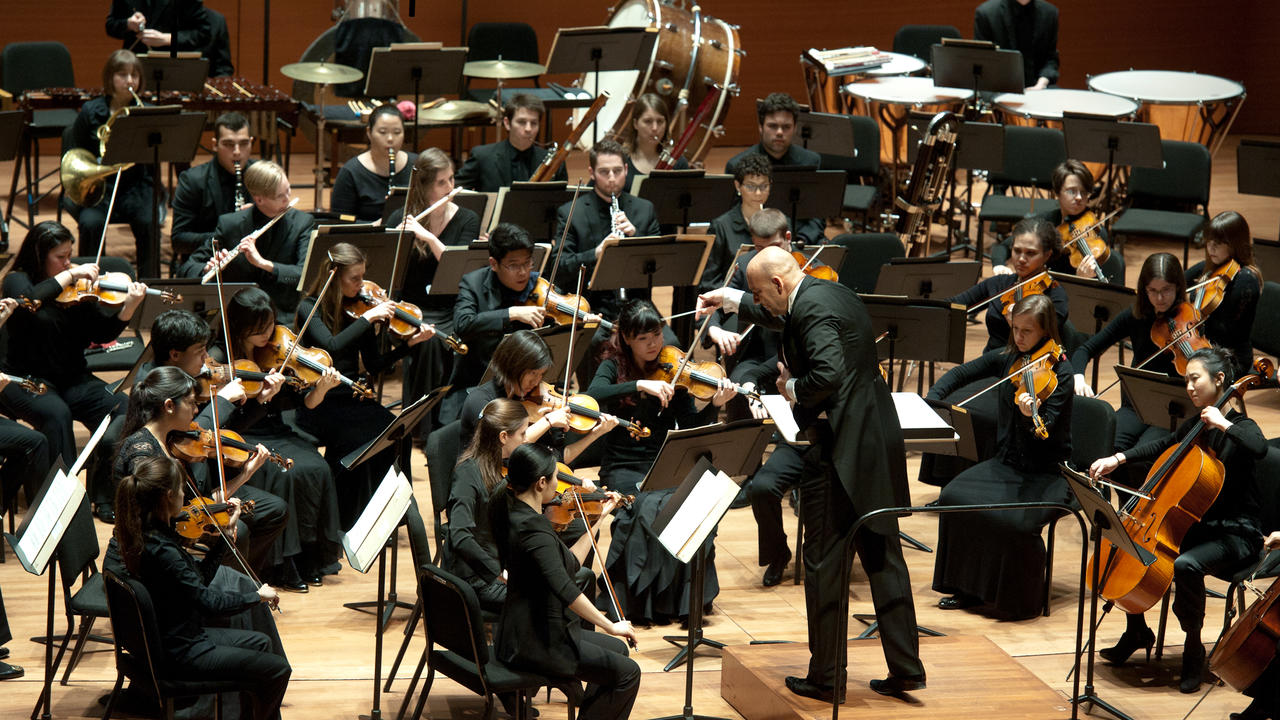 Emmanuel Villaume Conducts the Juilliard Orchestra in Works by Ravel and Debussy on Monday, December 4, 2017, at 7:30pm in Alice Tully Hall (photo by Nan Melville)