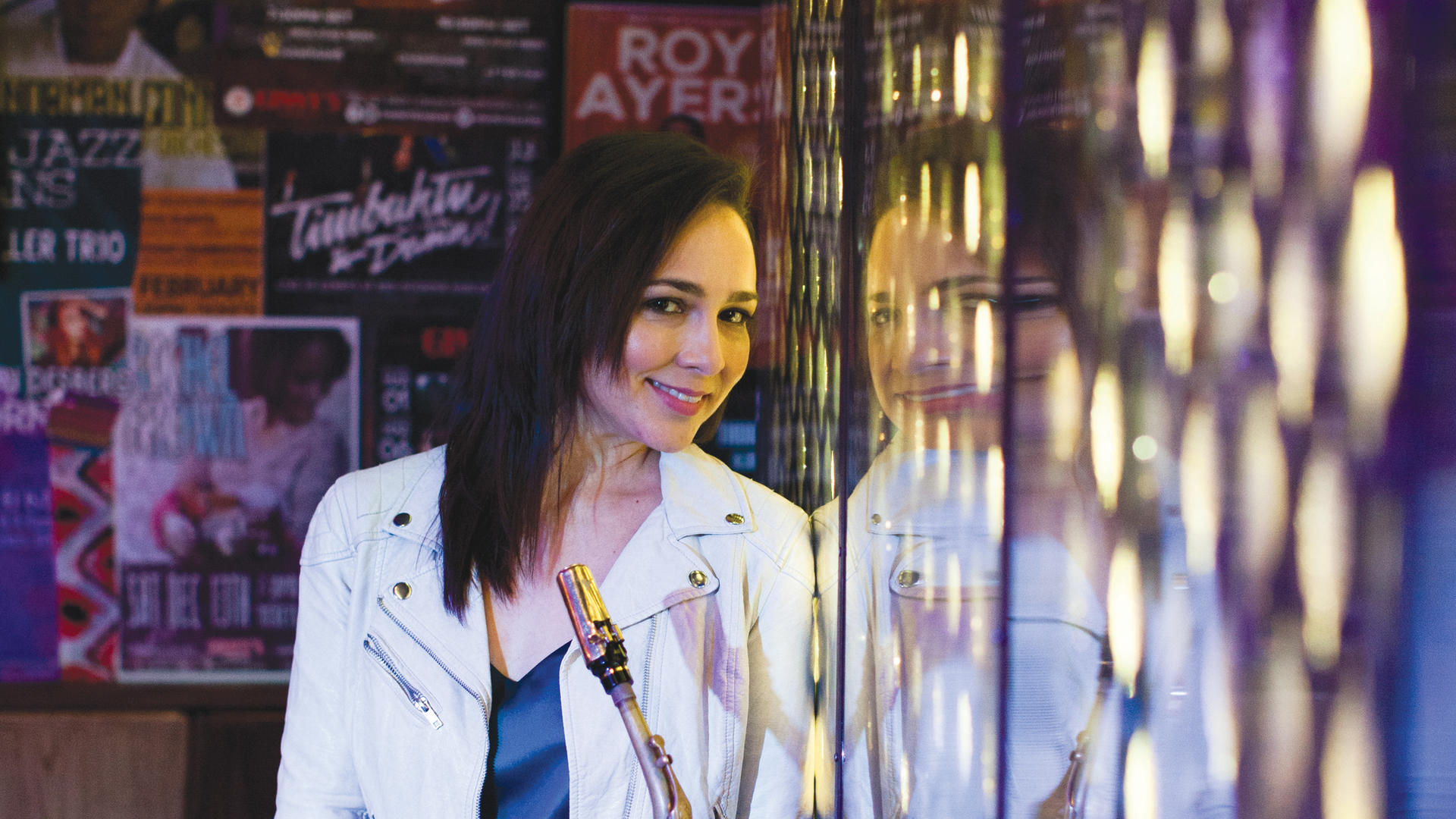 “I left the studio in Brooklyn where the new album was recorded and got right on a plane,” says alto saxist Sharel Cassity (MM ’07, jazz studies). She’s talking about how the process of making Evolve, the debut album of her newly formed group Elektra, fit into the last leg of her hectic schedule just over a year ago. It was November and the Oklahoma native was headed for Doha, Qatar, a Middle Eastern capitol that few had thought of as a home away from home for jazz musicians until Jazz at Lincoln Center (JALC) put a swinging outpost there from 2012 to 2016. The club, located in the upscale St. Regis Hotel, boasted stunning views of the Persian Gulf.

But even though Cassity had gigged at JALC Doha, she was returning to the city that November for a stay that was slightly more permanent. “While I was there earlier in the year, I received an offer to teach at a local music school, the Qatar Music Academy,” she explains. “The contract was for a year, and I taught all the woodwinds, the flutes, clarinets and saxophones. It was for kids from the local community, ages 7 through 18, but there were students from everywhere, even a few adults. I had pupils from Egypt, Korea, the U.K., even Boston. Before I left, I got them to form a little combo.”

Back in the U.S., and anticipating Evolve’s release on April 6, Cassity is ready for Elektra to reacquaint her with stateside audiences, who might have lost track of her while she was pursuing an international career. “It’s been 10 years since I had a release in the States,” she says, referring to Relentless, the disc she recorded in 2008, a year after getting her master’s at Juilliard. For several years, Cassity earned accolades in the major American jazz magazines while touring with, among other groups, the Dizzy Gillespie All Stars and the jazz/hip-hop collective Revive the Live. She’s proud of her 2014 collection of familiar standards, Manhattan Romance, which found her calling the shots for a superquartet that also included pianist Cyrus Chestnut, bassist Rufus Reid, and drummer Lewis Nash. “One reason I went to Juilliard was to get more steeped in the jazz tradition,” she says. “Manhattan Romance is where that came together, but it was on a label that only distributed in Japan and Europe.”

Cassity credits the high-caliber surroundings at Juilliard with showing her how to be a “true professional,” but in some ways, the music she’s been recording with Elektra reaches back to a time before she entered the program. “It’s more of a groove band with electric instruments,” she explains. “I was interested in the ways that jazz blended with more contemporary music when I was an undergrad at the New School. I feel my playing has deepened quite a bit since then. I knew bebop and ’50s music, but I hadn’t really studied Duke Ellington scores and [alto saxist] Johnny Hodges.” Of course, there’s a practical side to this linking of past with present. “I’ve noticed that jazz festivals offer a lot more than jazz nowadays,” she says. “It’s not like when the audiences used to come to hear specific artists like Freddie Hubbard or Miles Davis (’45, trumpet). What’s booked now is 80 percent pop or R&B or reggae. And what that means is that the sound engineers aren’t accustomed to the subtleties of acoustic music. Amplification just means louder, that’s it. One thing I want is for Elektra to grab the listener no matter what kind of venue we play.”

K. Leander Williams, a staffer at The New Yorker, has written about music and the arts for publications including Time Out New York, The New York Times, The Nation, and The Village Voice