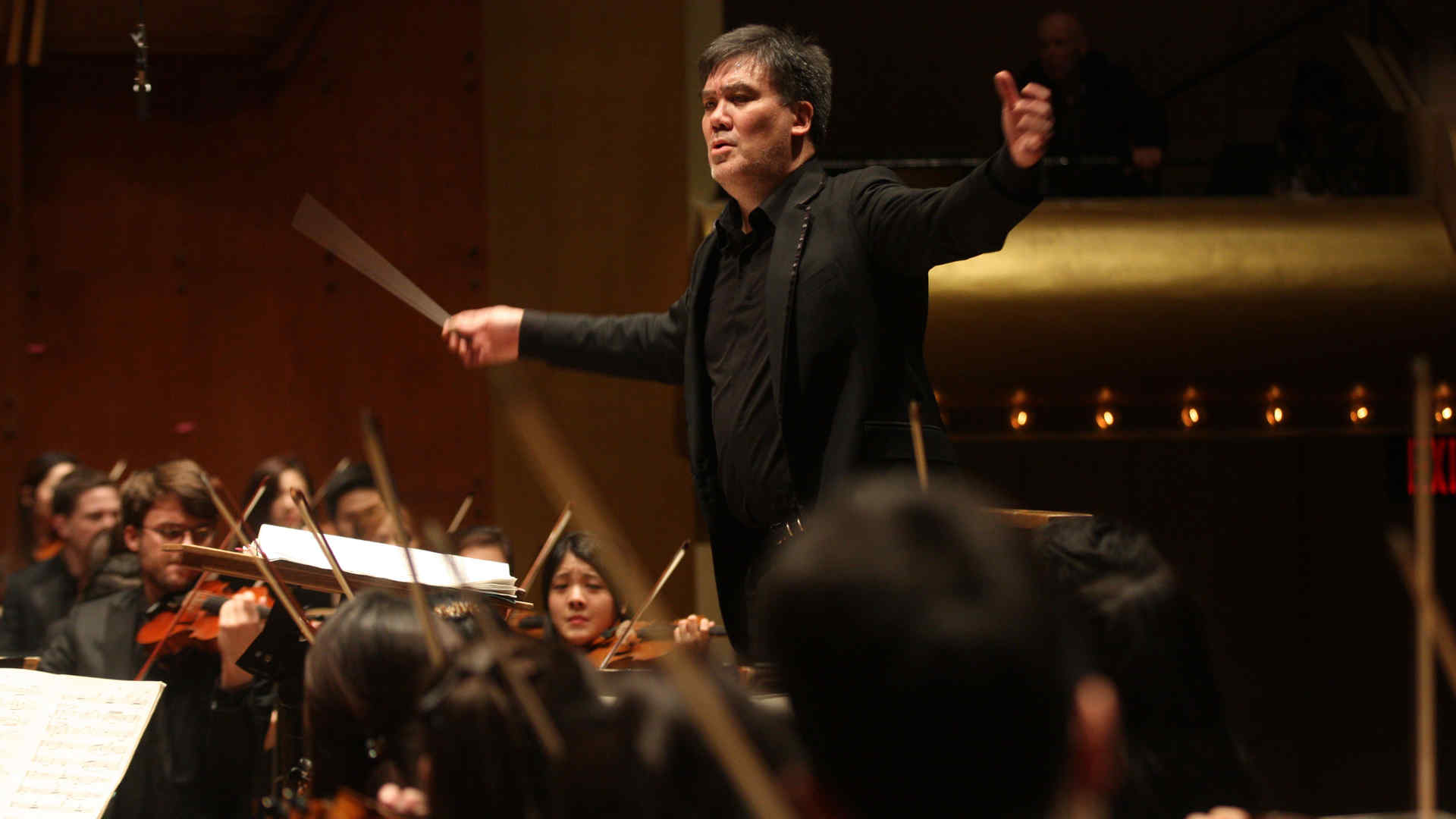 Nearly a year after bringing to a close his eight-year tenure as music director of the New York Philharmonic, Alan Gilbert reflects on another farewell—he’s stepping down as director of conducting and orchestral studies at Juilliard this spring. As announced in March, David Robertson will succeed him in the fall.

Gilbert’s decision was first and foremost a logistical one, he said in a recent interview. He’ll be taking over leadership of the NDR Elbphilharmonie Orchestra in Hamburg in 2019 but he’s already serving as the ensemble’s conductor designate. “My life is now really centered in Europe, which makes it impossible to be here as much as the students deserve,” Gilbert explained, expressing his great satisfaction in handing the reins to Robertson. “David is one of the most brilliant musical minds around, and I look forward to seeing in what directions he’ll develop the program.”

Gilbert’s association with Juilliard—he studied violin in Pre-College and got his master’s in orchestral conducting in 1994—has deep roots and being asked to head the conducting program “felt like a homecoming.” His parents are Yoko Takebe (Diploma ’64, violin; faculty 2001-present) and Michael Gilbert (BM ’64, violin; faculty ’94-’95) and he and his sister both attended Pre-College. Alan Gilbert studied at Harvard and the Curtis Institute of Music before returning to Juilliard to complete his graduate work in conducting. “It was such an exciting time to be back in New York, since in addition to studying, I had just started to work professionally as a conductor, leading the Haddonfield (N.J.) Symphony.” 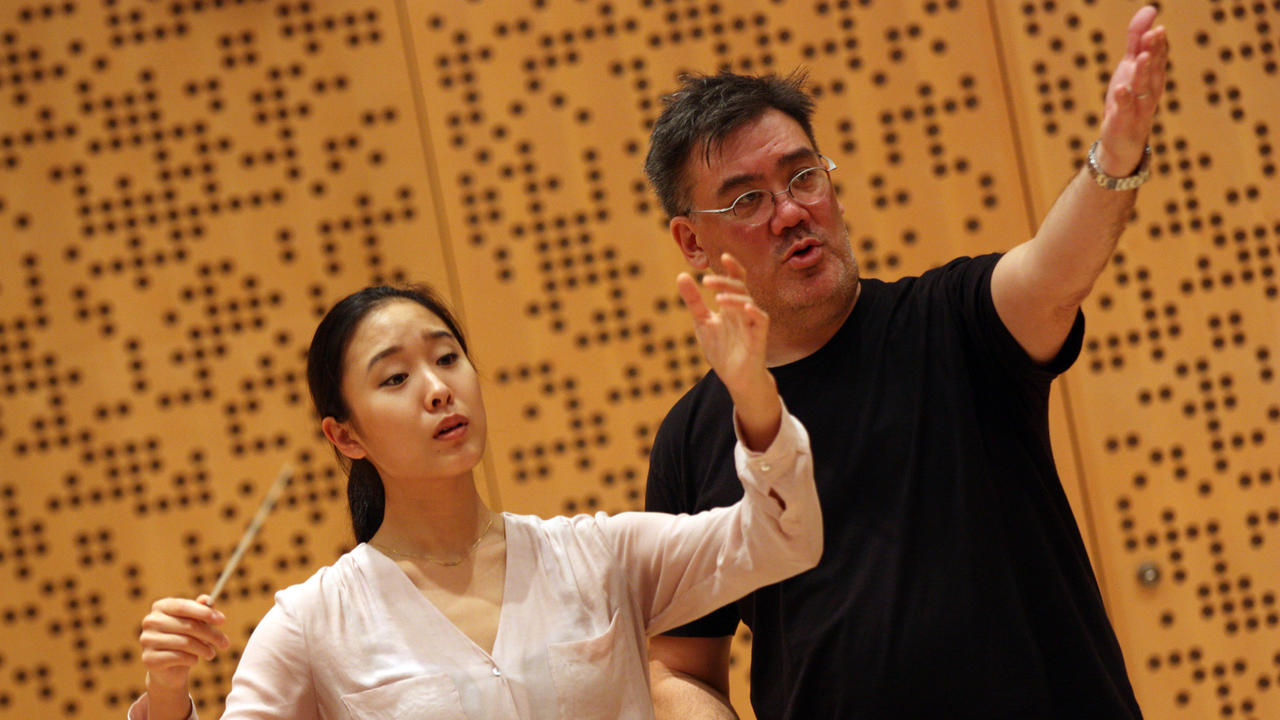 That combination of study and experience in the professional music world is critical for an aspiring conductor, Gilbert felt, so he made it a priority for his Juilliard students to receive maximal exposure to how he functioned at his “other job” at Lincoln Center. Members of the New York Philharmonic have of course long been a familiar presence on Juilliard’s faculty, but Gilbert’s tenure marked the first time that the Phil’s music director simultaneously led Juilliard’s program in conducting and orchestral studies.

“Our program at Juilliard is uniquely situated, with actual physical proximity that could give my students unprecedented access behind the scenes to experience how a top-level professional orchestra functions,” Gilbert observed. The Philharmonic exposure “wasn’t just to see me working,” he added. “They got to witness interactions with soloists backstage, with management, librarians, the PR department. I had them attend rehearsals of every program the Philharmonic gave—including all guest conductors—to see what works and what doesn’t work, what makes the orchestra tick.”

The art of teaching any subject in the performing arts is elusive, but none more so, according to Gilbert, than conducting. “It’s particularly tricky to teach because it’s not clear what works.” He feels the best method is to identify particular topics or situations—what he refers to as “areas”— that need to be addressed. “More than anything, I’ve tried to provide my students as rich an environment as possible to my students. I often say that you can only deal with an area when you realize it actually is an area. My conscious philosophy has been to try to introduce as many areas as possible—not to solve them necessarily, but to make sure that they are identified as such.” 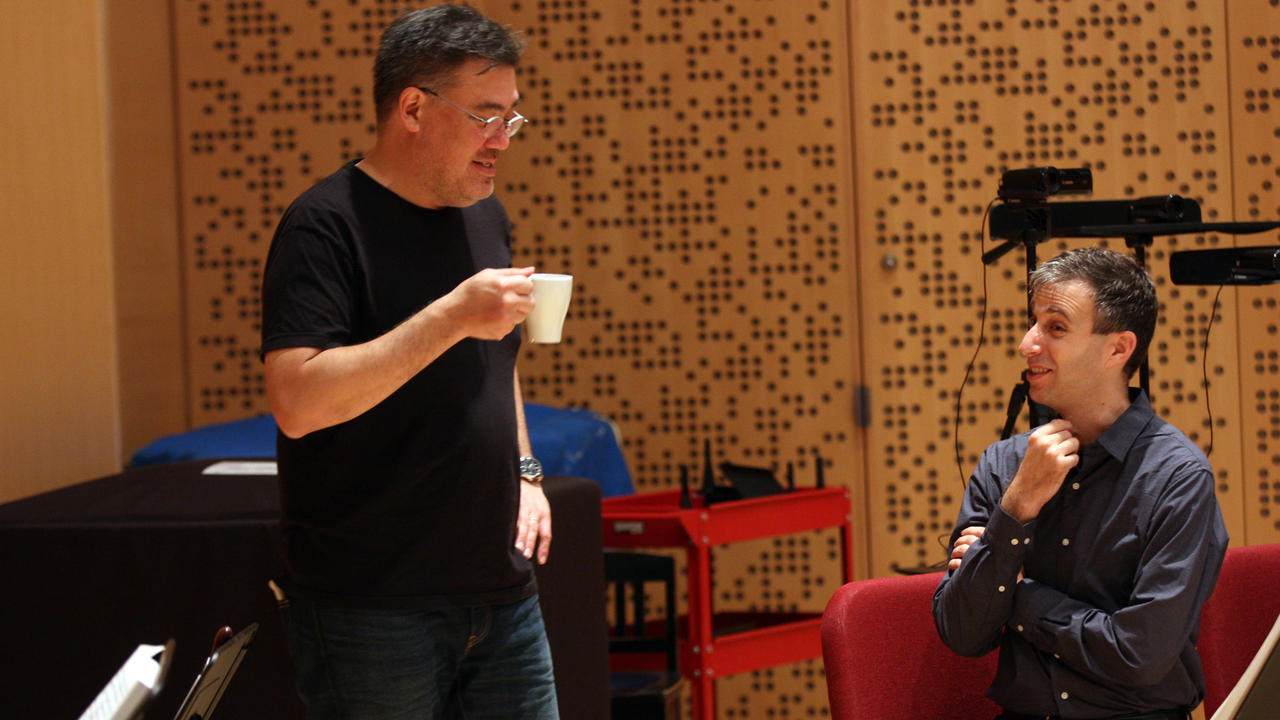 At Juilliard, this has entailed bringing in consultants to work with his students on issues ranging from physical movement, body awareness, and breathing to the management side of the business, public speaking, comportment, even attire. “One thing that is beautiful about the profession of conducting is that it demands so many capacities and qualities,” Gilbert said. “Even if it’s not possible to master all areas—or even any one area—it makes a difference to be aware of them.”

The legacy that has resulted is indeed impressive, as revealed by this sampling of former Gilbert students who are already making their names in the field: Karina Canellakis (MM ’13) won the 2016 Sir Georg Solti Conducting Award and made headlines when she filled in for Jaap van Zweden (’80, violin), Gilbert’s successor at the New York Philharmonic), in Dallas. Christian Reif (MM ’14) has been garnering raves as resident conductor of the San Francisco Symphony. Ruth Reinhardt (MM ’15) is now assistant conductor of the Dallas Symphony. Evan Rogister (MM ’05, voice) pursued graduate studies in conducting at Juilliard with Gilbert and has been racking up successes in the opera house and concert hall alike.

Teaching at Juilliard has been something that feeds me, since I learn from having to articulate the points that come up in class. I’ll miss that a lot

“The secret to having successful students is choosing good ones in the first place,” Gilbert said. “We’re very fortunate to have such a pool of students at Juilliard.” And the opportunity to teach here has fulfilled one of his most cherished goals. “For most of my life, I’ve had the ambition to combine an active career as a conductor with being a teacher. To be able to build a program and follow the changes and developments in this field over the years has been unbelievably gratifying. And it has made me feel like I’m making a difference.” 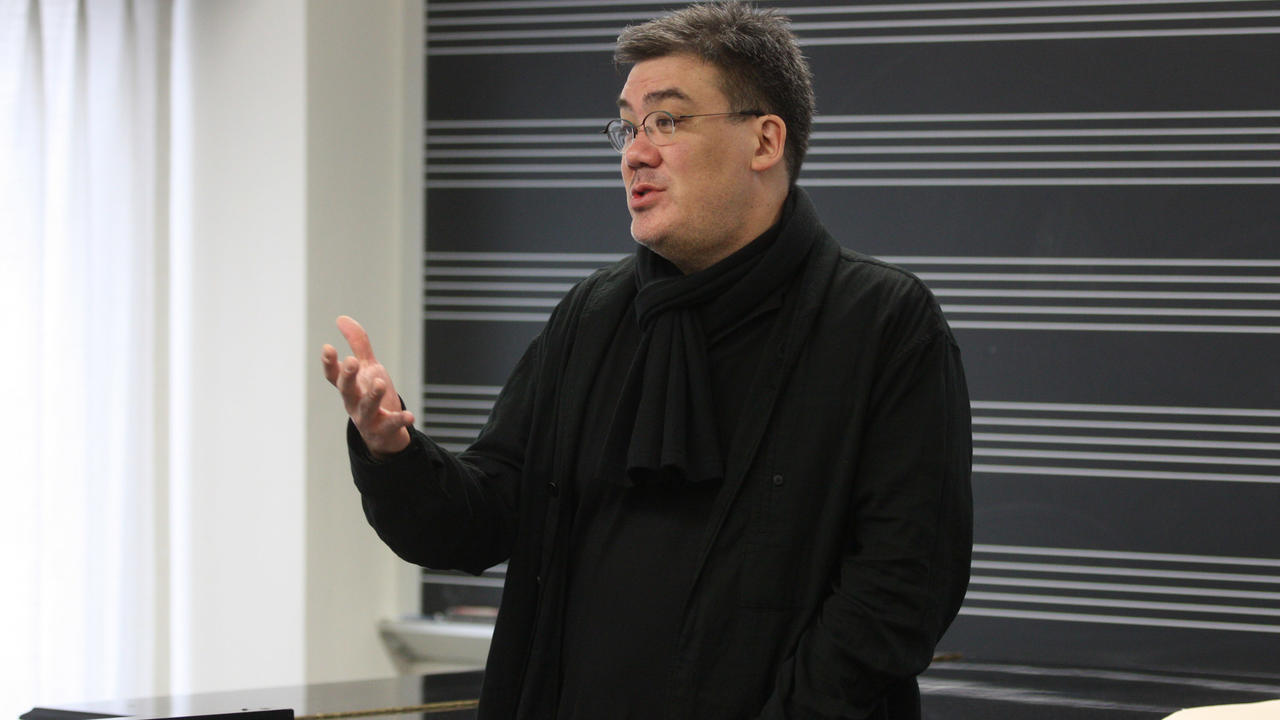 On April 16, Gilbert will lead the Juilliard Orchestra in its only David Geffen Hall appearance this season. “Even if I’d known I’d be leaving, I don’t think I would have tried to program it as some farewell event,” he said. “I’m always trying to come up with a program that is first of all made up of great music, but also music that the students need to play and can learn from and enjoy playing.” On the bill are the Brahms First—“an epitome of the 19th century that I hadn’t yet done with the Juilliard Orchestra and an endless treasure trove to explore”—as well as Samuel Barber’s First Essay for Orchestra and the Flute Concerto by Juilliard faculty member Christopher Rouse, of whose work Gilbert is a passionate champion, with soloist Giorgio Consolati, a fourth-year.

And while it turns out that this has ended up being a farewell concert of sorts, it’s definitely not a permanent leave-taking. As Gilbert adjusts to life in Europe again, he plans to return to Juilliard for guest appearances when his schedule allows. “Teaching at Juilliard has been something that feeds me, since I learn from having to articulate the points that come up in class. I’ll miss that a lot.”