Discovering the Magic of Chamber Music 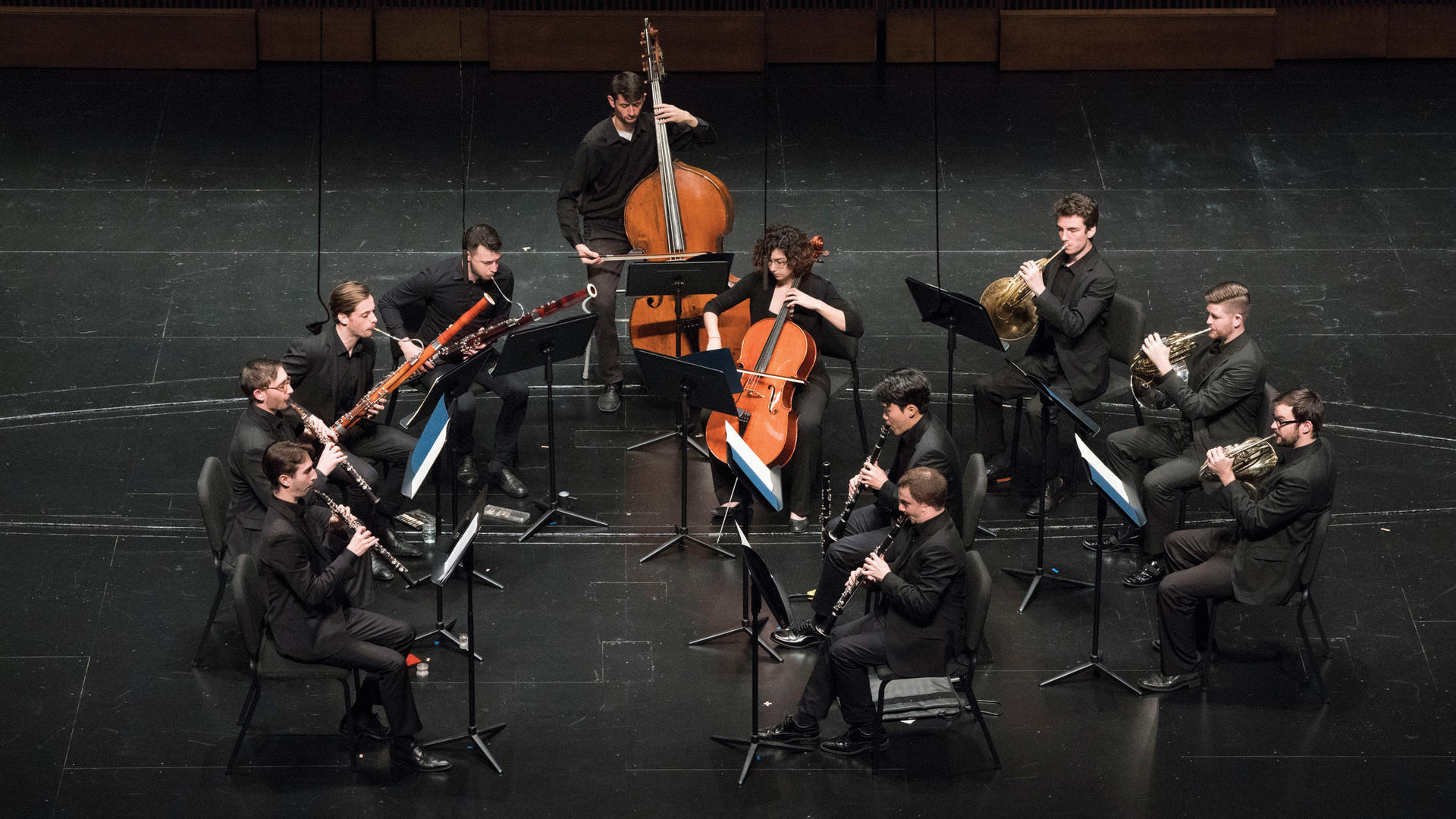 ChamberFest gives Juilliard musicians the luxury of time—a week before the rest of the students get back from winter break—in which to coach and perform a piece of chamber music. This year’s edition involved 20 ensembles of 115 performers (including one faculty member and three Pre-College students) working with 26 coaches and then playing eight concerts. Some of the performers wrote about their experience.

by Marie Engle
Getting Schoenberg’s massive, challenging, brilliant Pierrot Lunaire into performance shape in just one week was a huge undertaking. On the morning of January 3, we got together to rehearse for a couple of hours before our first coaching—but only managed to cover one and a half of the piece’s 21 movements before our coach Lucy Shelton, a singer who often works with the Vocal Arts department, arrived. That initial coaching was eye-opening. We stumbled through the first movement, which was not what we had hoped it would be. In fact, it was a bit of a disaster. With Lucy’s help, we dug in, but soon discovered how much work would be necessary for each of the 21 movements. The afternoon’s coaching, with Sylvia Rosenberg (Diploma ’51, violin; faculty 2007–present), did nothing to allay our fears that the piece was too much for us. We left feeling discouraged but also driven to prove ourselves wrong.

The second day ended up being a snow day—and the best thing that could have happened to us. Despite canceled coachings, we trudged in from different ends of the city for what ended up being nine hours of serious, focused rehearsal. And it was during that time that we discovered the magic of chamber music: making independent decisions about the piece as a group, getting to know our strengths and weaknesses, learning how we could support one another musically and ultimately, finding a language within which each of us could communicate and thrive. By the time we left, we were excited, exhausted—and energized for the next day.

We rehearsed vigorously through the weekend and had our first run-through on Sunday—the great reveal of whether or not we would be able to perform it the following Wednesday. After 40 minutes of uninterrupted Schoenberg, we were amazed to have gotten through the whole thing without a complete train wreck. The first of the work’s three books (each of which has seven movements) went so well it felt like a fluke. The second and third books included minor derailments, but we always got back on track. And after all of our rehearsing, we were finally discovering the beauty within the chaos of the musical language that Schoenberg invented.

After a few more coachings and rehearsals, we were finally ready to embark upon Pierrot’s fantastic journey with our audience, and our performance went better than any of us could have expected, especially after those initial rehearsals. Though I wouldn’t necessarily recommend this manner of preparing Pierrot for the first time—with no conductor and only a week of rehearsal—it certainly tested and proved our commitment to the piece and to producing music in a deeply expressive and informed way. I don’t think any of us will forget or regret our maiden voyage with Pierrot. 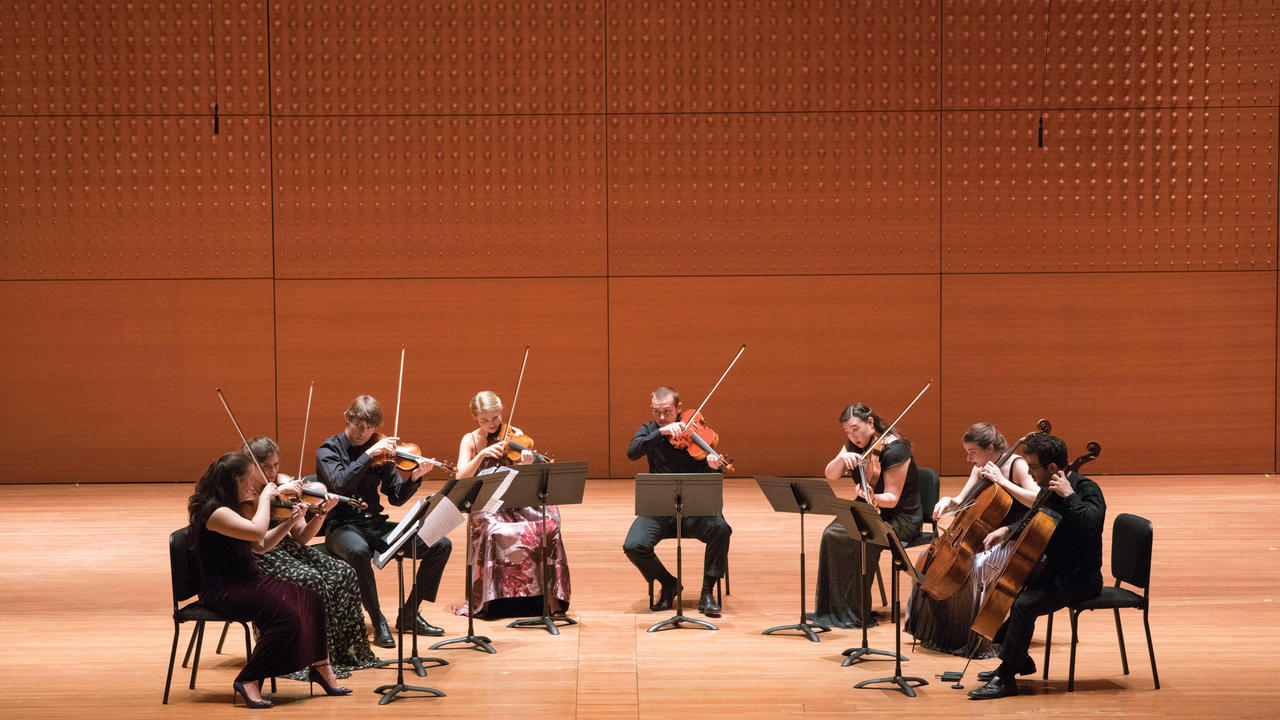 by Anna Han
One of the difficulties of scoring a two-piano piece is justifying the inclusion of the second piano, which tends not to broaden the range or timbre of sonorities in the way the addition of a different instrument could. In Chiaroscuro, John Corigliano (faculty 1991–present) resolves this dilemma by tuning one of the pianos down a quarter tone, creating a fresh set of musical parameters.

Composers rarely make use of quarter tones in piano repertoire as a piano’s intonation cannot be adjusted during a performance. When I first heard Chiaroscuro over a year ago, I was immediately struck by the sound of the modified instrument juxtaposed against the standard-tuned piano. At times, the instruments are dependent shadows of each other, while at other times, they seem to belong to completely separate worlds. At moments of amalgamation, they merge as a single voice with quarter tone expressive subtleties. In one particularly tricky second-movement section, several descending figures are layered in a canon to create the effect of cascading semi-tones. This three dimensional element of using offset tunings to create an illusion of distance between the two instruments makes the piece, to me, irresistible.

ChamberFest was the ideal and perhaps the only feasible channel for presenting this piece at Juilliard. Tuning a piano down a quarter tone requires a significant amount of work from piano technicians, and the chosen instrument must be both suitable for performance and available for this type of reconstruction. Making these instruments available for rehearsal time can also present a significant challenge. During the week of ChamberFest, my partner, Yijia Wang, and I split our rehearsals between the Paul Hall green room and Paul Hall depending on the instruments’ placements. Thus, with our entire rehearsal schedule dictated by Paul Hall’s availability, our rehearsal time was limited.

I had experienced deeply meaningful ChamberFests in the past with more traditional works—Gabriel Fauré’s Piano Quartet No.1, Op.15, and Antonín Dvoŕák’s Piano Quintet No. 2, Op. 81—but in some ways this year’s project facilitated an elevated process of music creation. We had the great fortune to be coached by John Corigliano himself, an esteemed member of the Juilliard composition faculty. The collaboration between the composer, the technician, the instruments, and the performers was a truly unique opportunity. 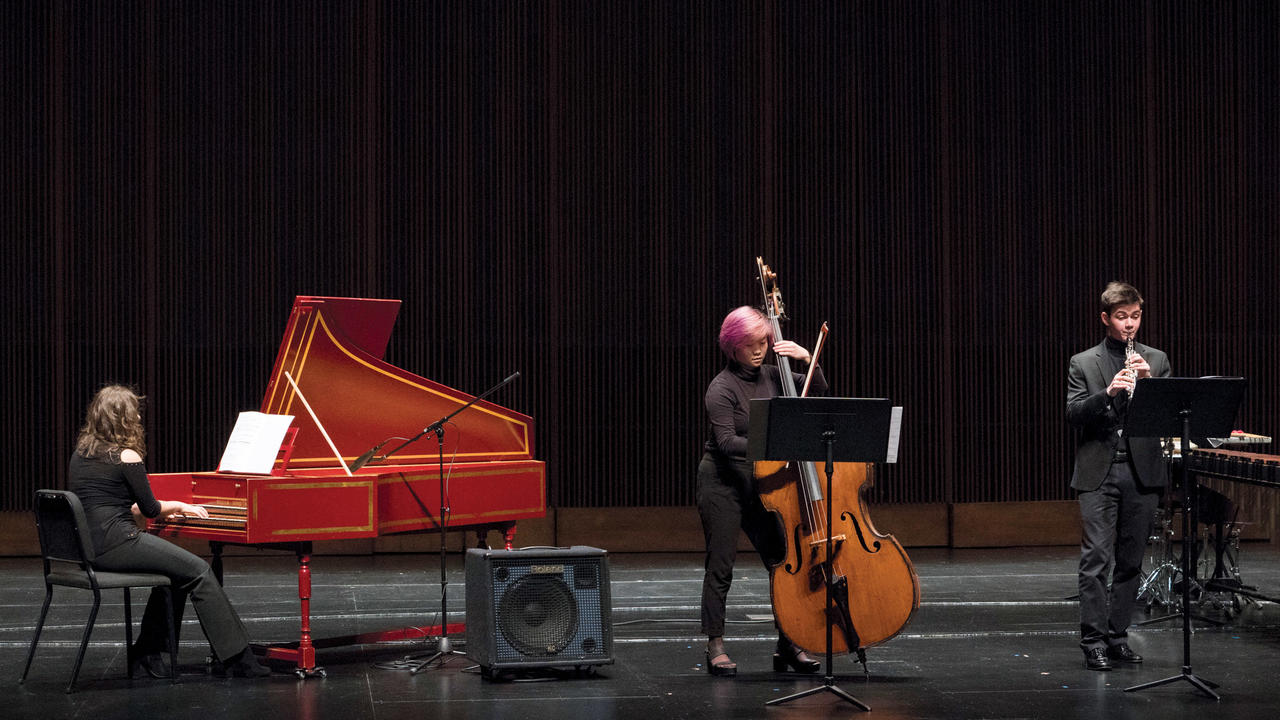 Partial view of the ChamberFest ensemble that performed Dutilleux's 'Les Citations,' a diptych for oboe, harpsichord, double bass, and percussion

by Jordan Bak
This fall, my dear teacher of one year, Hsin-Yun Huang (MM ’94, viola), asked me and four other students to play the Brahms Sextet in G Major, Op. 36, with her at ChamberFest. I had greatly admired Ms. Huang for years even before I started studying with her, so I began to fangirl like crazy when she invited me (she doesn’t know that—or at least she didn’t before now).

Before the first rehearsal, she sent all of us an email about scheduling, the edition of the score and parts that we should check out, things like that—and she said she wanted to be treated like one of us. This is someone who performs all over the globe as a soloist and chamber musician and collaborates with some of the most respected artists in classical music. So you can imagine our slight intimidation when we started to tackle this Brahmsian gem. During our first break, my friend asked if she had crossed the line by suggesting something interpretive to Ms. Huang. But is there really a line? We’re all musicians in one room, and we feel and think and hear things differently from one another. Ms. Huang was warm and willing to listen and open to our opinions and ideas. And so in the back of my mind, when I wasn’t focusing on playing in tune or executing a tricky passage with the first violin, I remembered that not too long ago, my teacher was just Hsin-Yun, a viola master’s student in her early 20s who wanted to find a corner in the library and absorb as much as she could and play Haydn quartets all the time—just like me. And even before that, there was a time when she moved from Taiwan to study at the Yehudi Menuhin School in England and remained mute for the entire first year; chamber music was her only form of communication.

But of course those days are long past and it was time to concentrate on rehearsing—and communicating through and about chamber music. We talked about what life was like during Brahms’ day and how we could make certain passages seem timeless. We formed memories that helped us grow more comfortable with each other as we pressed through the week. And by concert time, we felt ready to present something truly special. Ms. Huang dedicated our performance to Robert Mann, the founding violinist of the Juilliard String Quartet, who had died just a week earlier, and we began. I felt her natural love of chamber music resonate within ourselves and the audience. And after the concert ended, we said our goodbyes, Hsin-Yun Huang left to fly to China, and the rest of us got ready for the spring semester.