Concert on October 26 Celebrates John Corigliano’s 80th Birthday and Nico Muhly on the Occasion of His New Opera, Marnie, at the Met Opera

NEW YORK ––Juilliard’s AXIOM, led by founding director Jeffrey Milarsky and dedicated to performing the masterworks of the 20th and 21st centuries, presents three free concerts during the 2018-19 season.

The series opens on Sunday, October 14, at 3pm in Juilliard’s Peter Jay Sharp Theater and features Stravinsky’s Concerto in E-flat Major (“Dumbarton Oaks”) and Dutch composer Louis Andriessen’s De Staat (The Republic) (1972-76), presented as part of the New York Philharmonic’s Art of Andriessen festival. Mr. Andriessen was recently selected as the recipient of the Marie-Josée Kravis Prize for New Music at the New York Philharmonic, where he will be working with Juilliard alumnus and incoming New York Philharmonic music director Jaap van Zweden. The concert opens with a tribute to late composer Oliver Knussen and a performance of his Two Organa, Op. 27.

The AXIOM series continues on Friday, October 26, at 7:30pm in Alice Tully Hall with a program celebrating faculty member and composer John Corigliano, who turns 80 this season, and Nico Muhly, who studied with Corigliano at Juilliard. Mr. Muhly’s opera, Marnie, will debut at the Met Opera this season. The program features Muhly’s No Uncertain Terms (2017); Corigliano’s Chiaroscuro (1997); Muhly’s Keep in Touch with alumna, violist Nadia Sirota, one of the founders of AXIOM and a close colleague of Muhly’s; and Corigliano’s Poem in October (1970), set to poetry by Dylan Thomas.

AXIOM concludes its series on Thursday, April 18, at 7:30pm in Alice Tully Hall with a program featuring Xenakis’ Ohko (1989), composed to celebrate the French bicentennial and scored for three percussionists on djembe and bass drum; Pulitzer Prize-winning composer Caroline Shaw’s Entr’acte composed for the Brentano Quartet and premiered at Princeton University in 2011; and alumnus Steve Reich’s Tehilllim (1981), a setting of psalms, for four female singers and ensemble.

Celebrating John Corigliano’s 80th Birthday and Nico Muhly, on occasion of the Met Opera’s production of his opera, Marnie

Singer to be announced.

Singers to be announced.

Tickets for AXIOM concerts are free and will be available beginning September 20 at juilliard.edu/calendar.

AXIOM, led by music director Jeffrey Milarsky, is dedicated to performing the masterworks of the 20th- and 21st-century repertoire. Since its debut in Avery Fisher Hall (now David Geffen Hall) in 2006, the group has established itself as a leading ensemble in New York City’s contemporary music scene with performances throughout Lincoln Center, in addition to frequent appearances at Columbia University’s Miller Theatre and (Le) Poisson Rouge in Greenwich Village.

AXIOM is grounded in Juilliard’s curriculum. Students receive a credit in chamber music for performing in the ensemble, and during any four-year period, AXIOM members will have the opportunity to perform works by Adams, Birtwistle, Druckman, Lindberg, and Schoenberg, among other composers. Guest conductors of AXIOM have included Alan Gilbert, Susanna Mälkki, and David Robertson.

American conductor Jeffrey Milarsky is the founding music director of AXIOM. Known for his innovative programming, he has been hailed for his interpretation of a wide range of repertoire, which spans from Bach to Xenakis. In recent seasons he has worked with such orchestras as the New York Philharmonic, San Francisco Symphony, Los Angeles Philharmonic, Milwaukee Symphony, American Composers Orchestra, MET Chamber Ensemble, Bergen Philharmonic, Chamber Music Society of Lincoln Center, New World Symphony, and the Tanglewood Festival Orchestra. In the United States and abroad, he has premiered and recorded works by many groundbreaking contemporary composers, in venues such as Carnegie Hall, Zankel Hall, Davies Symphony Hall, Alice Tully Hall, Walt Disney Concert Hall, Boston’s Symphony Hall, and at IRCAM in Paris.

Mr. Milarsky has a long history of premiering, recording, and performing American composers and in keeping with that, he was recently presented with the prestigious Ditson Conductor’s Award. His interest and dedication has brought forth collaborations with esteemed composers such as Adams, Babbitt, Cage, Carter, Corigliano, Crumb, Davidovsky, Druckman, Gordon, Lang, Mackey, Rouse, Shapey, Subotnick, Wuorinen, and an entire generation of emerging composers.

An in-demand timpanist and percussionist, Mr.Milarsky has been the principal timpanist for the Santa Fe Opera since 2005. In addition, he has performed and recorded with the New York Philharmonic, the Philadelphia Orchestra, and the Pittsburgh Symphony. He has recorded extensively for Angel, Bridge, Teldec, Telarc, New World, CRI, MusicMasters, EMI, Koch, and London records.

At Juilliard, Mr. Milarsky received his bachelor’s and master’s degrees and was awarded the Peter Mennin Prize for outstanding leadership and achievement in the arts. 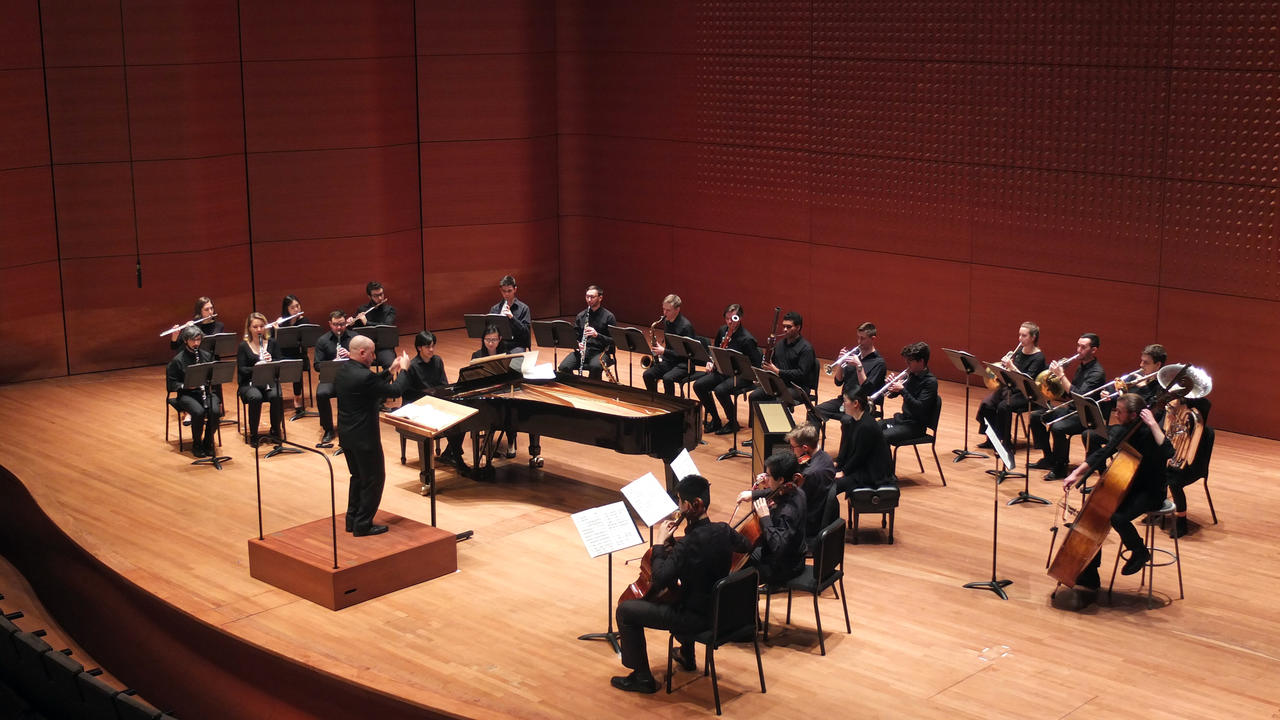