About the Composers and the Program

Sunbin Kim is a New York-based composer and pianist whose compositions have been performed in the U.S. and Europe. For his Fantasy Concerto, he was the soloist with the American Symphony Orchestra, conducted by Leon Botstein. His awards include ASCAP Morton Gould Young Composer Awards, North/South Consonance, a fellowship at the Aspen Music Festival, and the Gena Raps String Quartet Prize. His latest project is an international collaboration with the Dutch ensemble But What About with U.S. and European concerts scheduled for 2019. He studied composition with Joan Tower and George Tsontakis at Bard College, where he also earned a degree in physics. He received his MM from Juilliard as a student of Robert Beaser and is now in the DMA program at Manhattan School of Music, working with Reiko Füting. Four Studies on Darkness–After Mark Rothko was inspired by Kim’s visit to an exhibit of the late works of Mark Rothko. Kim writes: “Unlike [Rothko’s] more well-known works from the 1950s in bright oranges and pinks, the late works took on a much darker tone. Throughout each of the movements, I have made use of gradual processes of various sizes (slow to fast, sparse to dense, one timbre to another, and so on) to imitate the experience of noticing layers of details in a Rothko piece during several minutes of viewing.” The Four Studies are: Black, Red and Black; Rust, Blacks on Plum; Green Divided by Blue; and Black on Grey.

Josefino Chino Toledo is a professor and chair of the department of composition and theory and a University Artist III at the University of Philippines; music director and conductor of Metro Manila Concert Orchestra and Grupo 20/21 Modular Music Ensemble; and former associate artistic director and conductor of the first Asia-Europe Music Camp, a project created by the Asia-Europe Foundation. His work, Agos, for narrator and ensemble, receives its world premiere in this concert. It is based on Joi Barrios-Leblanc’s “The Bamboo Curse,” a poem about the 2013 typhoon Yolanda (Haiyan) that destroyed and submerged the province of Leyte, killing thousands of Filipinos. “Agos (Flow) seeks to capture the emotions and reactions derived from experiencing this natural phenomenon,” Toledo says.

Akira Nishimura, professor at the Tokyo College of Music, has been composer in residence at the Yamagata Symphony and music director of Osaka’s Izumi Sinfonietta and the Kusatsu International Summer Music Academy and Festival. Commissions from leading ensembles including the Arditti and Kronos quartets, have been performed at major music festivals worldwide. Nishimura’s many compositions, for orchestra, soloists, chamber ensembles, and Japanese instruments, are published by Zen-On (in the U.S., European American Music) and have been recorded frequently. The New Juilliard Ensemble has presented Western Hemisphere premieres of several of his compositions. Mirror of Stars, a new version of an earlier piano solo, was commissioned by the Suntory Foundation for Arts and premiered in Osaka in a 2001 portrait concert. The performance on this program is the first outside of Japan. The composer writes, "Mirror of Stars for piano solo (1992) has the largest number of pianissimo parts of all my works. I arranged it for chamber concerto almost without changing the solo piano part."

The performance of Virko Baley’s Violin Concerto No. 1, “Quasi una fantasia” celebrates the 80th birthday of Virko Baley. Ukrainian-born, he moved to the U.S. as a child, studied piano in Los Angeles with Rosina Lhévinne and Earle Voorhies and graduated from the Los Angeles Conservatory (now the California Institute of the Arts). He settled in Las Vegas in 1970, founded the composition program at the University of Nevada, and founded and directed the Las Vegas Chamber Players, which presented a major contemporary music festival and grew into the Nevada Symphony Orchestra, of which he was music director and conductor from 1980 to 1995. A frequent guest conductor internationally, Baley has conducted most of the important orchestras of the former USSR. Baley is now a Jacyk Fellow at Harvard Ukrainian Research Institute and distinguished professor of music and composer in residence at the University of Nevada. His opera, Holodomor (Red Earth. Hunger), about the Ukrainian famine from 1932-33, was performed in a chamber concert version in Las Vegas and New York and later repeated in Kiev. In the winter of 2019, it is scheduled to receive its fully stage premiere at the Lviv Theater of Opera Ballet in Ukraine. Baley’s Violin Concerto No. 1, subtitled “Quasi una Fantasia,” was commissioned by W. Howard Hoffman and dedicated to the memory of his father, also named W. Howard Hoffman. The chamber version in this concert was premiered by the New Juilliard Ensemble and recorded by it with soloist Tom Chiu.

The New Juilliard Ensemble, led by founding director Joel Sachs and now in its 26th season, presents music by a variety of international composers who write in the most diverse styles. The ensemble appears regularly at MoMA’s Summergarden and has been a featured ensemble four times at the Lincoln Center Festival. It has given world premieres of some 100 compositions and U.S. premieres of many others. Concerts in the 2017-18 season included music by John Woolrich, Gerald Barry, Raminta Šerkšnytė, Akira Nishimura, Mauricio Kagel, Giya Kancheli, Shuci Wang, Liu Sola, Sunbin Kim, Kolbeinn Bjarnason, Alejandro Cardona, and Jonathan Dawe. In 2014, the New Juilliard Ensemble collaborated with Carnegie Hall on UBUNTU: Music and Arts of South Africa. A highlight of the 2013-14 season was a collaboration with the Royal Philharmonic Society’s Bicentennial Celebration with the U.S. premieres of works by Magnus Lindberg and Judith Weir. In 2012, NJE collaborated with Carnegie Hall on Voices From Latin America; in 2011, with Carnegie Hall’s Japan/NYC festival; and in 2009, with Carnegie Hall’s Ancient Paths, Modern Voices festival. The New Juilliard Ensemble performs in Juilliard’s Focus festival; recent Focus festivals have included: China Today: A Festival of Chinese Composition (2018); Our Southern Neighbors: The Music of Latin America (2017); Milton Babbitt’s World: A Centennial Celebration (2016); and Nippon Gendai Ongaku: Japanese Music Since 1945 (2015). It will open the 2019 Focus festival, On the Air!, a celebration of the decades-long commissioning projects of European and Canadian broadcasters.

Joel Sachs, founder and director of the New Juilliard Ensemble, performs a vast range of traditional and contemporary music as conductor and pianist. As co-director of the internationally acclaimed new music ensemble Continuum, he has appeared in hundreds of performances in New York, nationally, and throughout Europe, Asia, and Latin America. He has also conducted orchestras and ensembles in Austria, Brazil, Canada, China, El Salvador, Germany, Iceland, Mexico, Switzerland, and Ukraine, and has held new music residencies in Berlin, Shanghai, London, Salzburg, Curitiba (Brazil), Newcastle-Upon-Tyne (U.K.), Helsinki, and the Banff Centre (Canadian Rockies). One of the most active presenters of new music in New York, Sachs founded the New Juilliard Ensemble in 1993. He produces and directs Juilliard’s annual Focus! festival, and has been artistic director of Juilliard’s concerts at New York’s Museum of Modern Art (MoMA) since 1993. A member of Juilliard's music history faculty, Sachs wrote the first full biography of the American composer Henry Cowell, which was published by Oxford University Press in 2012. Sachs often appears on radio as a commentator on recent music and has been a regular delegate to numerous international music conferences. A graduate of Harvard, Sachs received his PhD from Columbia University. In 2011, he was made an honorary member of Phi Beta Kappa at Harvard for his work in support of new music, and he received the National Gloria Artis Medal of the Polish Government for his service to Polish music. In 2002, he was given Columbia University’s Alice M. Ditson Award for his service to American music.

Violinist Stella Chen, a native of Palo Alto, California, has performed with the London and Lausanne Chamber Orchestras, Welsh National Symphony Orchestra, Harvard-Radcliffe Orchestra, Medellín Philharmonic Orchestra, and Boston Youth Symphony, among others. The recipient of Harvard’s Robert Levin Award to “an extraordinarily gifted undergraduate musician,” she won the top prize at the Tibor Varga competition (Switzerland) and was the youngest to win the Yehudi Menuhin International Competition for Young Violinists. Chen has presented recitals at venues including the Kennedy Center, and the Greene Space at WQXR. She graduated from the joint Harvard/New England Conservatory Program; at Harvard she majored in psychology. Chen is now a C.V. Starr doctoral fellow at Juilliard, studying with Li Lin, Donald Weilerstein, and Catherine Cho; former teachers include Itzhak Perlman and Miriam Fried.

Regina De Vera, currently in her final year of training in Juilliard’s Drama Division, was the first Filipino to be admitted to the school’s MFA program. She completed her undergraduate degree in theater arts at the Ateneo de Manila University, where she was honored with the Loyola Schools Award for the Arts. After graduation, she joined the Tanghalang Pilipino Actors’ Company, the resident theater company of the Cultural Center of the Philippines (CCP), where she was a resident actress. In 2013, she won the PHILSTAGE Award for the Performing Arts for Outstanding Female Lead in praise of her work as Portia in a Filipino adaptation of The Merchant of Venice. She has collaborated with Filipino composer Josefino Chino Toledo in various stages of her journey, first when she was in college, and again when she joined the CCP. www.reginadevera.com

Alvin Zhu, a Young Steinway Artist, is active as a recitalist, orchestral soloist, chamber musician, and a recording artist on Steinway’s self-playing Spirio piano. He has performed in prestigious venues across four continents including Alice Tully Hall, the Sydney Opera House, the Stadio Olimpico in Rome, and the Beijing Concert Hall. His recent performances include a 15-city China tour. He judged the 2018 Franz Liszt International Piano Competition for Young Pianists in Changsha. Born in Pittsburgh, Zhu earned his BM and MM degrees in Juilliard’s accelerated five-year program, then spent a year in the Yale School of Music’s Artist Diploma program before returning to Juilliard as a C.V. Starr doctoral fellow, studying with Yoheved Kaplinsky and Julian Martin. He took a leave of absence for 2017-18 as a Fulbright scholar in China, also earning the title of “foreign expert scholar” at the Central Conservatory of Music. Zhu is now completing his DMA dissertation, the first biography of his famed grandfather Zhu Gong Yi, whose work shaped modern piano pedagogy in China before and after the Cultural Revolution. 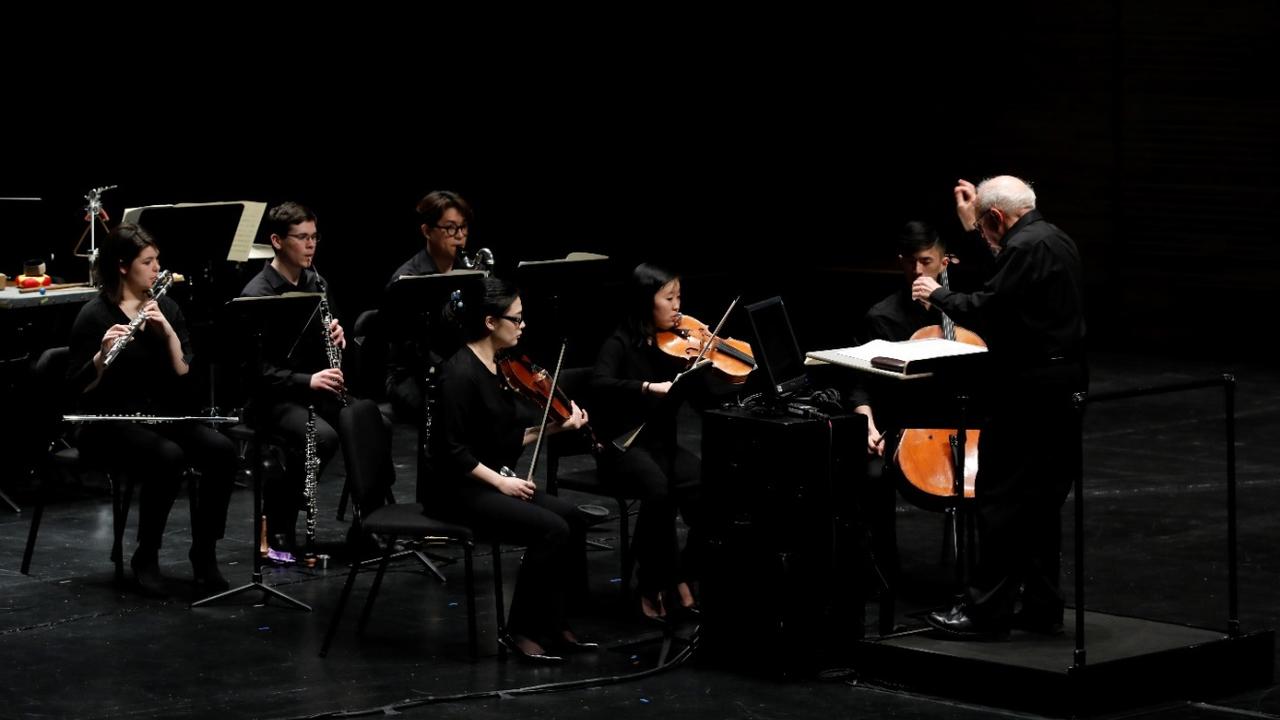