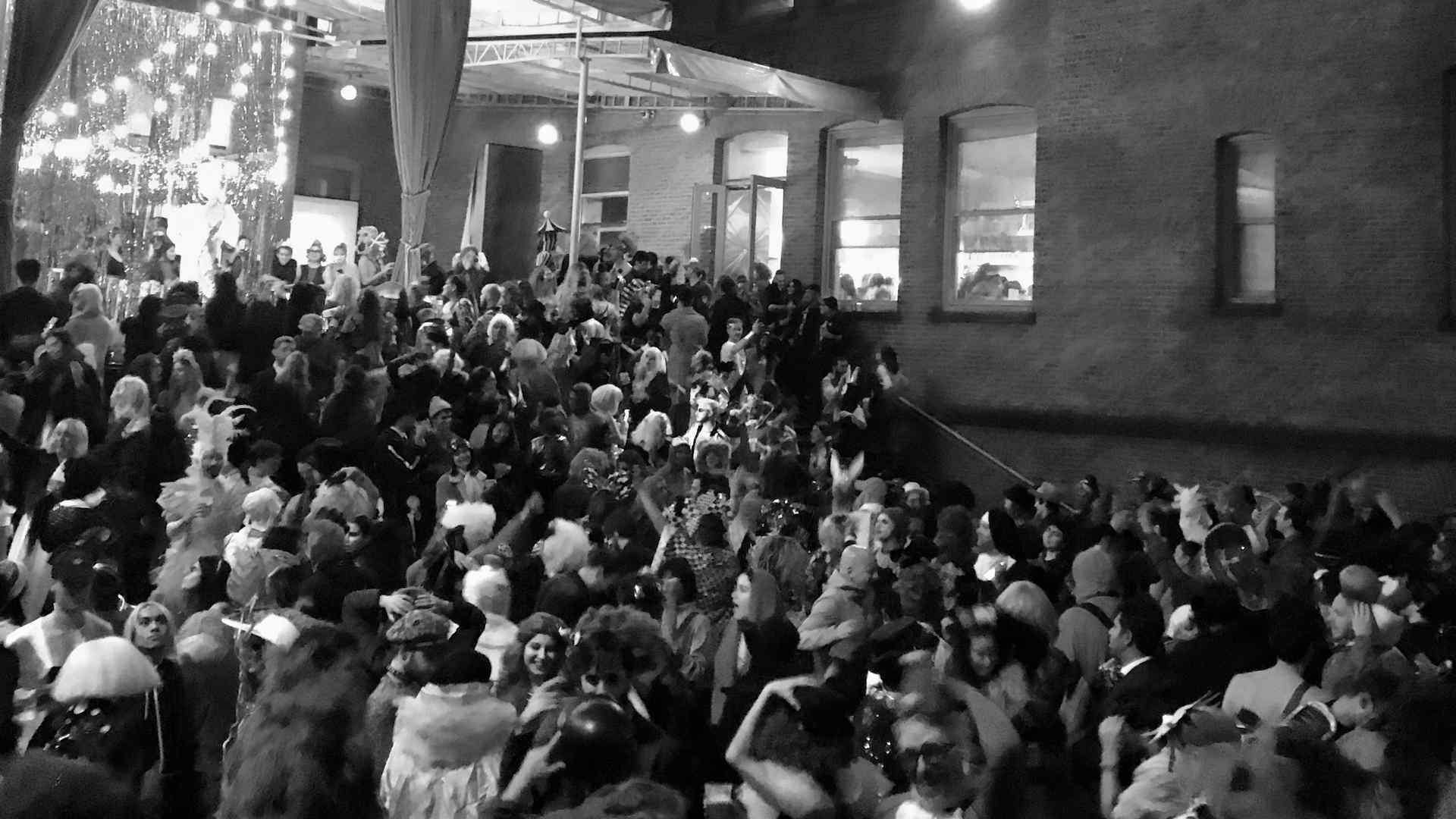 For the past three years my friend Matthew Quigley and I have ventured to the far-off land of Long Island City to attend the MoMA PS1 Halloween Ball.

MoMA PS1 is an offshoot of the Museum of Modern Art (located in Midtown). PS1 is in an old public school. The classroom-sized galleries, and the slightly familiar architecture give the museum a unique feel. PS1 also has a much younger and funkier vibe than the refined main MoMA. The exhibitions at PS1 tend to be a bit more experimental and all over the map. Anyways, this location lends itself beautifully to the format of a Halloween ball!

My sophomore year I made it my goal to start experiencing more of New York City and to engage with the world outside of an educational atmosphere. I went to visit MoMA PS1 with Kitty, a family friend and a bold New Yorker. I immediately fell in love with the place! Thus when Halloween came I purchased tickets for myself and my most adventurous friend, Matthew. Matthew has a similar appreciation for visual art and a passion for fashion and costume design. Our first year we obsessed over what to go as. We finally settled on succulents. We were very content until we realized that we would have to sew dozens of small succulents and cut them out of felt. We definitely spent a few too many hours on that project! We went to the ball dolled up as two strange little cacti. We were met by hundreds of New Yorkers in the most amazing garb. We were floored by the spectacle: two DJs, the museum transformed by costumed visitors, a huge dome filled with trapeze acts and club kids dressed to the nines, and free candy of course! The theme of the Halloween Ball in 2016 was the election. I don’t think I have ever seen so many versions of Donald Trump and Hilary Clinton in my life. It was so wonderful that we left the ball already thinking about next year, and aiming to step up our costume game.

The second year, between school, commuting, grocery shopping, homework, and rehearsals, Matthew and I had no time to plan an elaborate costume. The theme of the ball was space, thus we just went along with the concept of the cosmos and the universe. The night of the ball Matthew and I painted our faces with stars and dressed in black and white and went as constellations. The second year was just as charged as the first. We spent more time in the exhibits and admired the club kids in the dome. They were suspended about the crowd in the most amazing costumes. In the context of the museum they seemed to be living works of art.

Third time’s the charm! Matthew and I are seniors, thus we don’t know if we will be around for another round of the ball. But yet again time got away from us in our costume planning. Matthew exercised his creative talents by going to Goodwill and transforming oversized suits into costumes. This year's theme is Musée de Cirque, so we went as circus management, clad in big suite jackets, corseted white button-ups, caps, and Matthew’s latest obsession: red eye makeup. As usual we grooved in the corner of the large tent with the club kids. We sequestered ourselves because we like to move bigger than most pedestrians. We set down our bags behind a speaker and felt the bass in our chests and fell into the fantasy world of Halloween. In some strange way it felt like one big performance: New Yorkers transformed by makeup, character, and lighting. They swayed and adapted to the tempo and tone of the music, and they exuded confidence and the joy of a shared groove.