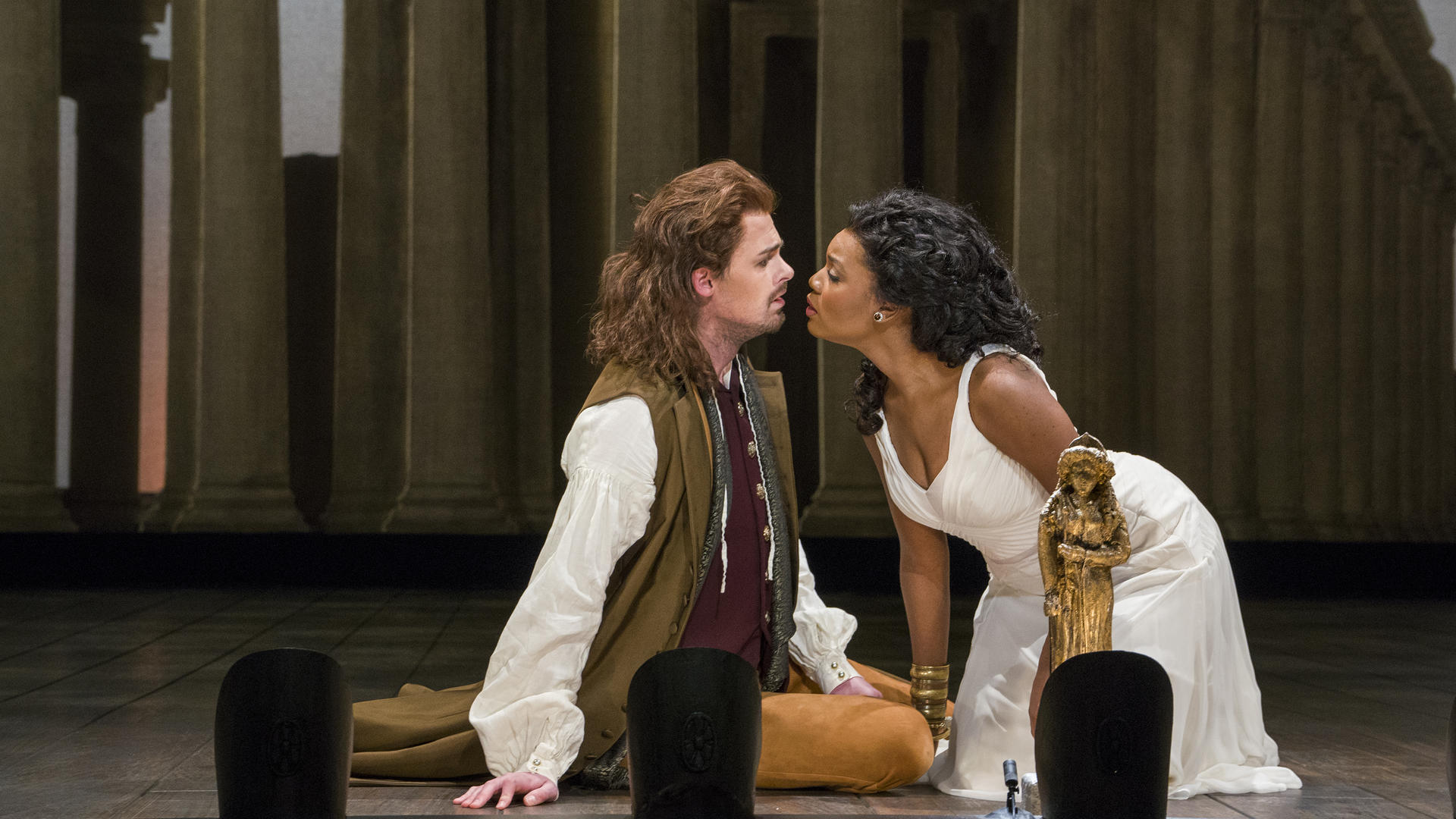 Soprano Onadek Winan (BM '16, MM '18, voice) is a native of Paris and a competitive swimmer who graduated from Juilliard last spring.

Tell us about yourself.

I was born in the fourth arrondissement in Paris, near the Cathédrale Notre-Dame de Paris and IIe Saint Louis. I grew up there, along the right bank of the River Seine for the first eight years of my life. At sunset, my Dad would always take me for long walks all the way to the Jardin du Luxembourg. A music lover himself and highly skilled musician he would sing to me all the time. One night, as he was singing a C Major scale, I sang it back to him, perfectly in tune. I was only six months old and not even talking at this point. My dad stopped walking, looked at me astonished and said “My child, you’re going to be a singer.” The rest is history.

My big brother and I grew up listening to music 24/7: music was constantly playing at home. I was introduced to Michael Jackson, James Brown, and the Temptations to cite a few at a very young age but my first gift ever was Madonna’s album You Can Dance, released in 1987. I will always remember: I was 4 years old and knew every single song by heart and choreographed each one of them. That’s when I knew, at that age, that I would be a performer.

You graduated this past spring. What are you up to now?

A lot of things! I am fortunate to not only have opera and recital performances lined up, but also a lot of theater and film opportunities upcoming in the U.S. and Europe. I am currently working on some Shakespeare. This is something that was tremendously instructive at Juilliard: we had a complete training, not only in singing but in dance and acting. I was lucky enough to work with wonderful directors such as John Giampietro—who also was my acting teacher my first year of undergrad—as well as David Paul. Both of them were incredibly helpful in my acting education.

What is your favorite performance you have given throughout your career?

Without any hesitation being invited to sing the national anthem at an event at the National Mall in Washington. I’ve been singing it since I was a child, telling people I should be ready for “when I would sing it like Whitney Houston at the Super Bowl.” I have fallen in love with the U.S., so singing the national anthem on the National Mall was so special to me. But the real story is that I was dealing with massive allergies at that time. I moved to D.C. and lived for four months there during allergy season. I couldn't even sing the day before the performance. I took a train back to New York to see my ENT doctor—the extraordinary Dr. Paul Kwak (a Juilliard alum!)—who opened his practice just for me on a Sunday morning and took care of me. Check out my performance here.

You’ve studied and trained at various locations including Houston Grand Opera and Wolf Trap Opera. How have these experiences shaped your craft?

I learned so much in both of these places! My time in Houston was very productive, and I gained so much working with the staff at Houston Grand Opera. As for Wolf Trap I was fortunate to be the title role of a commissioned opera Listen Whilemina!, directed by Mo Zhou. It was such an incredible experience. Mo Zhou is one of these directors who will bring a part of who you are as a person to the character you’re portraying, and the final product is usually unbelievable. Spending time with her and seeing her vision and work for several weeks was an immense privilege.

You’ve been featured in The New York Times for your performances at Juilliard. What was that like?

That was mind-blowing! The very first time was during my first year, and I wasn’t expecting to have this kind of exposure that early on. I bought probably 20 copies of that paper and sent it to my parents in Paris. That review is now framed on my piano in Paris, as well as at my grandmother's who lives in Spain! I am very fortunate to have a very supportive family.

What is one thing you wish more people knew about the vocal arts or opera?

That it is not boring at all! There is nothing more real, beautifully complicated, and raw than seeing the opera Manon by French composer Massenet sang by superstars Anna Netrebko and Roberto Alagna, who I esteem profoundly. Also opera is accessible to everybody, that’s something that I am trying to carry on as an artist and a very important message close to my heart. I didn’t grow up listening to opera or classical music, I fell in love with it at 16 years old. I started going to the conservatoire in Paris at 5 years old, not because my parents liked opera or classical music, but because they were curious and wanted me to be exposed to everything. Check out a Juilliard master class I participated in here.

You’ve always lived in large cities. Can you compare life in Paris vs New York City?

The energy is quite the same, very fast. People are always busy and hustling in both cities. What I like the most about Paris is its history. I am fascinated by the French Revolution and know all about it! New York is incredible because of the entertainment and art scene, there’s always a good show, play, opera, or gallery to see. I like that in New York things are mostly open mostly 24/7; as a performer I have really intense schedules, early mornings, late nights, and it just makes life easier to have access to stores or whatever I need whenever. And to conclude, Paris is the city of haute couture, I am a girly girl, highly into fashion. My mom did study fashion in Belgium so that’s something I really appreciate and share with her.

For anyone traveling to Paris, what are the must- do activities or the must-eat foods?

My favorite neighborhoods to explore after the fourth arrondissement and Latin Quarter would be near the Musée du Louvre and Jardin des Tuileries. Very romantic and the architecture is just breathtaking. As for the food, anything truly! Though I am particularly fond of French cheese and French baguette.

Your résumé states you are a competitive swimmer. How did you discover your love for swimming?

I have always been into sports in general, enjoying watching and playing sports with family. One of my brother is a professional athlete, so I have always been around that world in some capacity. Growing up I was one of these kids who were always busy. It was major for my parents to have my brothers and I perfectly educated by doing a bunch of different activities from sports to ballet, acting, music, playing piano, painting etc.

I call myself a water person, I enjoy swimming very much so and did it professionally right before high school. Then my music aspirations took over. Growing up Michael Phelps was one of my role models, I still have his picture and Serena Williams’ on one of my bedroom walls in Paris! I’m a huge fan of these two, I truly admire their respective journeys.

I majored in political sciences right before Juilliard from the Sorbonne University in Paris!

As a Juilliard alumna, what advice do you have for students who are graduating this year?

Don’t be afraid! Everything will be fine as long as there is passion, discipline and perseverance. I really stand by this quote [that's attributed to] American president Calvin Coolidge: “Nothing in this world can take the place of persistence. Talent will not; nothing is more common than unsuccessful men with talent. Genius will not; unrewarded genius is almost a proverb. Education will not; the world is full of educated derelicts. Persistence and determination alone are omnipotent.”

My journey wouldn’t be the same without the unconditional love and support that I receive from my incredible parents and two brothers. I am also grateful to have an extremely loving and very supportive boyfriend, Kyle. My Juilliard experience was made possible by the phenomenal support of Bruce and Suzie Kovner, and having been named a Kovner Fellow as well as the 2015 Presser Scholar for outstanding achievement as a music major by Juilliard is such an honor. Brian Zeger, the remarkable artistic director of Vocal Arts was such a wonderful mentor who always took time guiding me during these years, and still does so today. To my teacher, Edith Bers who changed my life in many ways, Jean Luc Berard from Safran, Edith Wiens and Kai Moser for their love, my dear Andrew Gaines Juilliard Vocal Arts production administrator, my coach David Moody who was my ears during my last productions at Juilliard, and last but not least, Juilliard's iconic president Joseph W. Polisi to whom it was an honor to call my president during these five years.