John Adams on the Yin and Yang of His Musical Life 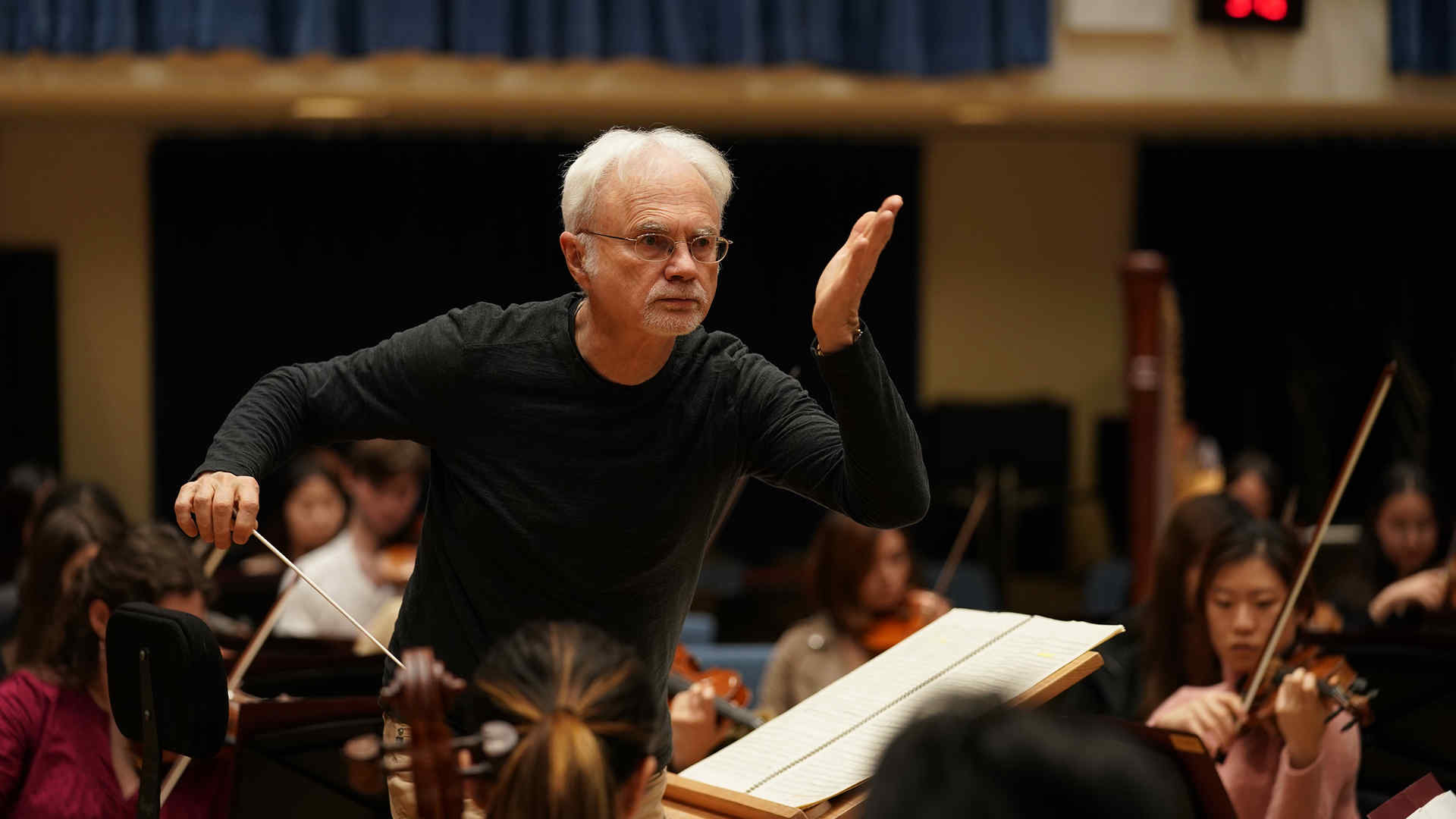 John Adams at a 2017 performance-discussion at Juilliard, shown with Llewellyn Sanchez-Werner and Tengku Irfan. Over the years, Adams (Honorary Doctorate ’11) has been a frequent presence at Juilliard as a composer, conductor, and mentor.

“What does it take to move us from our customary place?” John Adams asked in his commencement speech to the Juilliard class of 2011. “That is what we want when we confront a work of art, whether it’s a completely new creation or an impassioned performance of a masterwork from the past.” The acclaimed composer returns to Juilliard December 10—this time to conduct the Juilliard Orchestra in a program that pairs the Brahms Fourth Symphony with two 21st-century pieces: Ciel d’hiver by Finnish composer Kaija Saariaho and Adams’ own Doctor Atomic Symphony.

“I like to think of conducting as the yang and composing as the yin of my musical life,” Adams, who has long supplemented his creative life as a composer with conducting engagements and residencies, said in a recent interview with the Journal. And while he is among the most sought-after composers alive, he tries to balance these roles.

“Composing is obviously a very personal, introverted activity, and I tend to become extremely habitual in my daily life when I am home writing and can probably seem rather hermetic to my neighbors,” Adams explains. “Conducting is completely the opposite: it’s very other-oriented, very much about dealing with other people’s personalities and emotions, and it involves quick, strategic decisions. If I didn’t have the continual experience of performing, I strongly suspect that my creative life would atrophy in some way. But the two activities, taken together, form a wholeness that feeds my imagination.”

When he takes up the baton, Adams says, he finds that his experience as a composer sharpens his intuitive understanding of other composers’ work: “There are things that composers do that are similar to the craft of painting. For example, how you prepare a background, or how you accomplish shading or chiaroscuro, or how you produce an effect of a vanishing point. All of these are matters of technical skill coupled with inspired imagination.”

Take a piece that calls for such delicately atmospheric orchestration as Saariaho’s gorgeous Ciel d’hiver (“Winter Sky”). Adams brings to the rehearsal process his wisdom as a composer celebrated for his mastery of orchestration—all his technical expertise as to how to produce a particular timbral combination most effectively.

Adams has a special affinity for another Finnish composer, Sibelius, who he considers an enormous influence on his compositional thinking. The single-movement Seventh Symphony of Sibelius in particular served as a model for the final version of Adams’ Doctor Atomic Symphony, which reworks material from his 2005 opera about the people involved in the first atomic bomb test.

Adams says he’s drawn to Brahms’ Fourth Symphony “because of its formal perfection—the union of classical structure/rhetoric and Romantic expressivity.” In preparation, he studied old recordings “to see if there is any kind of collective agreement about performance practice, only to find that those presumably authoritative versions (conductors with some kind of link to Brahms or von Bülow) vary so drastically that it’s impossible to know whether a Toscanini or a Weingartner or a Walter or a Furtwängler was the right approach.”

A major challenge, he explains, is that “Brahms gives precious little indication in the score about the push and pull of tempi”—whether something should be slowed down or resumed at the “normal” tempo. “Yet the harmonic and melodic direction of the music demands continuous flexibility in tempi, something that I think Brahms simply assumed would be so obvious he didn’t indicate it in the score.” And so Adams must rely on his composer’s intuition about how to articulate that kind of flexibility.

For Adams, the hardest thing can be transitioning from a period of intense composing back “out into the world”— and vice versa. It can be quite challenging, he says, “having to go from the solitude of my studio to the busy, frenetic activity of preparing and performing a week of concerts with a large symphony orchestra. But once I’ve made the adjustment, I find I’m equally happy to be reunited with my other, more sociable self.”