Juilliard Drama Puts on a Musical! 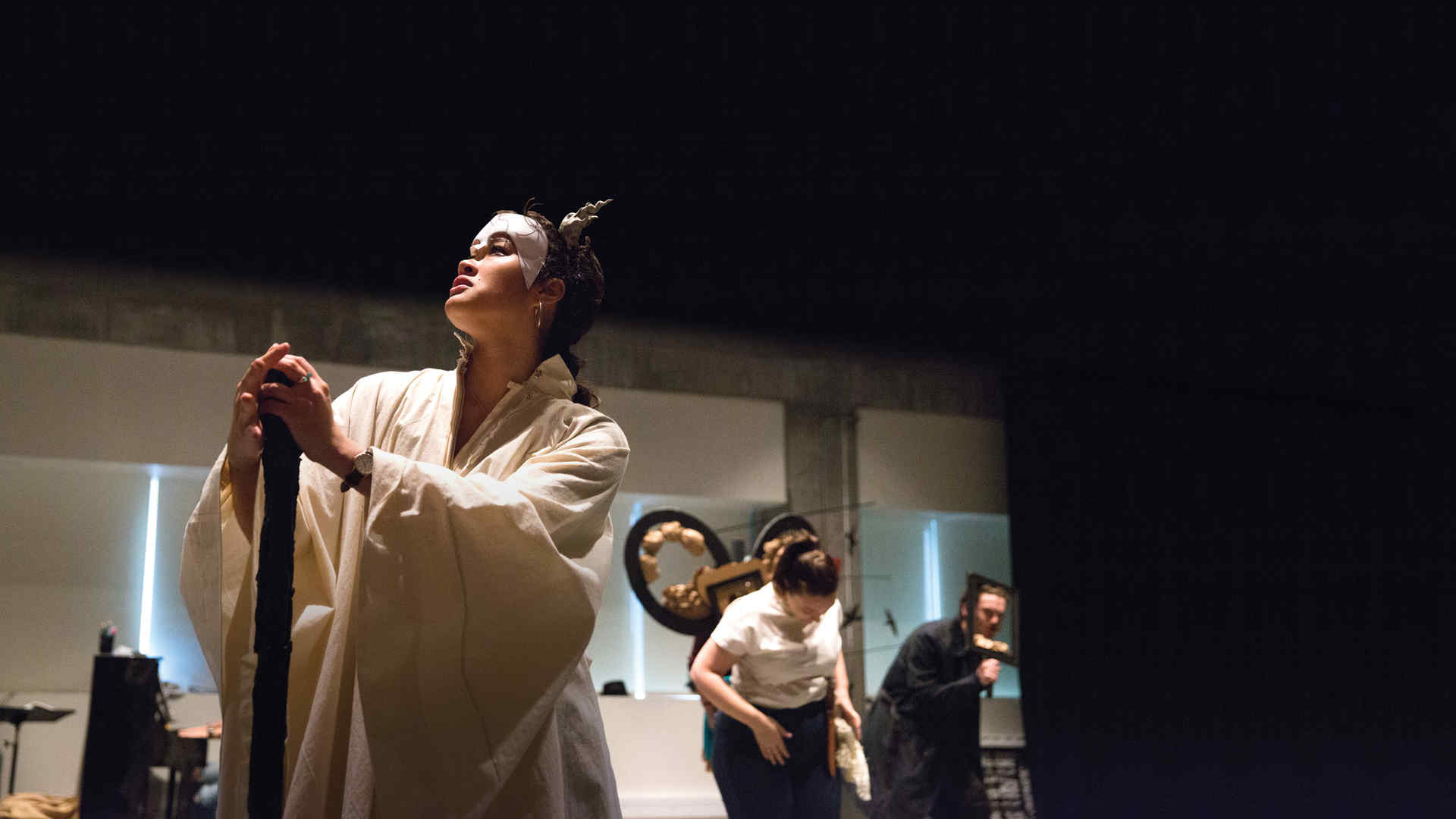 Juliette Kenn de Balinthazy plays the witch in 'Into the Woods'

Different Shades of Morality in Into the Woods

On December 6, the fourth-year actors will open in Into the Woods, the Grimm’s fairy tales-inspired musical with music by Stephen Sondheim and book by James Lapine that premiered in 1986. This rare Juilliard Drama full-length musical will be directed by a Broadway veteran, Sarna Lapine, who’s also James Lapine’s niece, with a five-piece ensemble of Juilliard musicians conducted by another Broadway veteran, Fred Lassen, from the keyboard. Drama student Regina De Vera, who plays Little Red Riding Hood, interviewed Sarna Lapine not long after stage rehearsals began.

It’s week one—what are you most excited about in this rehearsal process?
I’m excited because I was so impressed by how well this show was cast, so I feel like we’re already down the runway and lifting off very quickly and getting into the meat of the work. I also feel that everybody has come musically prepared for a show that’s difficult musically. That allows us to do the character work and the scene work and get things on their feet so quickly. I’m also excited by seeing all the great relationships in the room—chemistry comes from history, and that’s something you can’t manufacture. You guys have lived together for four years and the richness in those connections is golden. You’re already a community and we’re doing an ensemble musical about a community, so we’re starting at a much deeper level.

What themes in Into the Woods resonate now?
Any work you do in theater is always going to reflect the time in which you do it. Into the Woods is a story about a community on the cusp of enormous change. It’s been a very tumultuous time in this country and in this world, and things are changing very fast. It feels as if we are also a society on the cusp of tremendous change. Into the Woods is also philosophical in how it looks at what makes up a community. Does crisis bring people together? Can it bring people together? When you’re about to be crushed by the weight of a gigantic force, do you give up or do you keep pursuing hope? What lessons do you imprint on your children in the midst of an actual threat or crisis? Into the Woods looks at different shades of morality, and each of these characters has a moral compass that fluctuates based on circumstance and want. It’s a classic because no matter when we do it, it always feels relevant to the time we’re living in.

I was so excited that our costume and scenic designers were both women of Asian descent. Do you actively seek out to collaborate with people of color or did it just happen to align that way?
That’s an interesting question and a fair one, but I’m not looking specifically for Asian women designers. It’s just that my friends and people I know and people I work with are who they are, and we’ve worked on many shows together and we’re a great team. Mikiko Suzuki McAdams (scenic designer) was one of the first people I met in the theater when I moved to New York. We were assistants at Lincoln Center Theater on The Light in the Piazza. She’s been one of my dearest friends and in a lot of ways my most essential collaborator over 13 years. Through her I met her Yale friend Valérie Thérèse Bart (costume designer), and we've worked together a lot too. 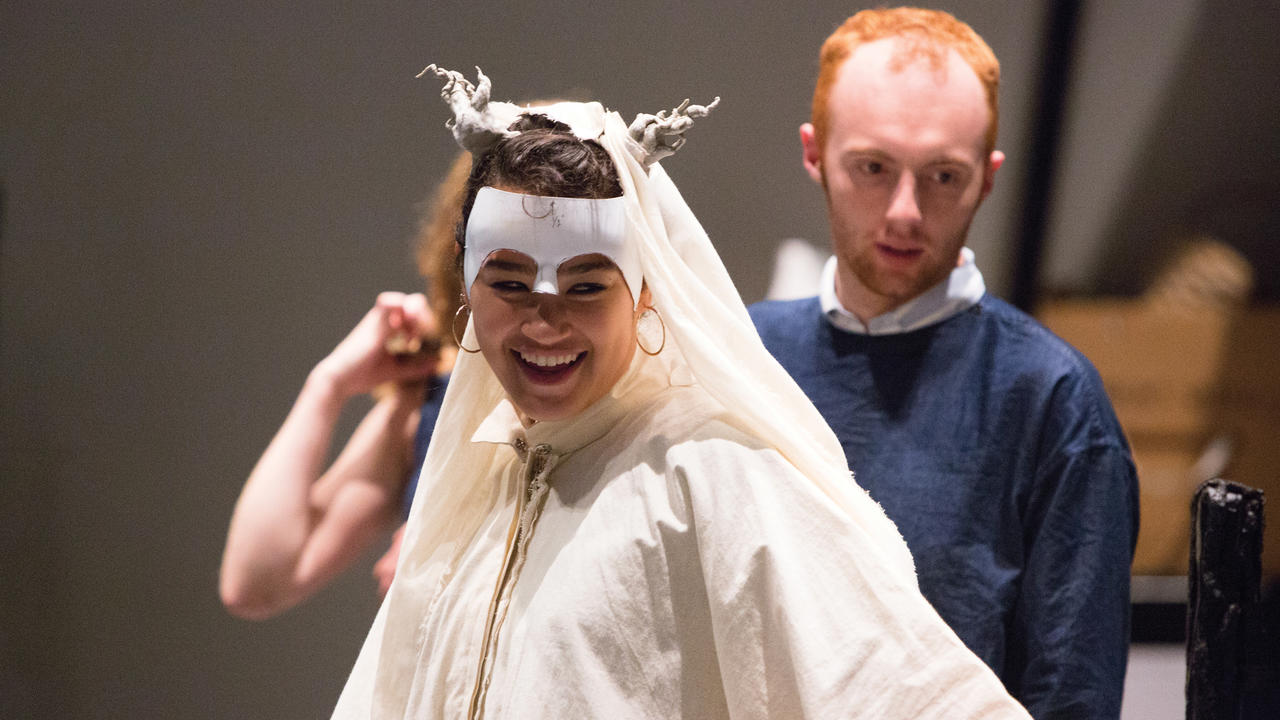 Tell us more about your collaborative process in discovering a design anchor for Into the Woods.
I always start with the set. For this project, I knew I wanted to do a simple unit set, given the schedule and space parameters and I knew I really loved the darkness of Into the Woods and Grimm’s Fairy Tales. I don’t believe good and evil are divided.

I’m simultaneously prepping for Britten’s The Rape of Lucretia with Mikiko, and it’s very heavy, but there’s an interesting quote: “It is an axiom amongst kings, to use a foreign threat to hide a local evil.” That’s affected me deeply in relationship to Into the Woods as well, because there are shifting alliances, this perception that this community should be afraid about a threat from the outside. That the Giant or the Witch is an outsider. In the song Your Fault, we’re looking for the outsider to blame and making up a foreign threat to ignore what might be evil or morally corrupt within ourselves. So I thought, let’s take all the color out of the set, and put the characters at the center of it and let all the action and alliances and visual interest come from them. Then the environment is this sort of quiet stoic backdrop against which their dramas play out. I sent Mikiko some pictures by Kara Walker and she came up with her own interpretation. Then Valérie joined us and we began a conversation about the interplay between the set and clothes.

What is your process of making something your own?
It’s giving yourself permission to live in your own imagination. I’ve always been a reader first, because then the images arise without effort and conjure shapes and colors and movement and sound. What’s interesting about doing shows that James [Lapine] has written is that they are shows that I’ve lived with and dreamed on for a very long time. Sometimes the challenge is in how we step away from what we think we know and into the unknown. As much as I prepare and plan, it’s very important to leave time and space and room for collective discovery in the rehearsal process. Something becomes original because this group of people has never done this show before at this moment in time.