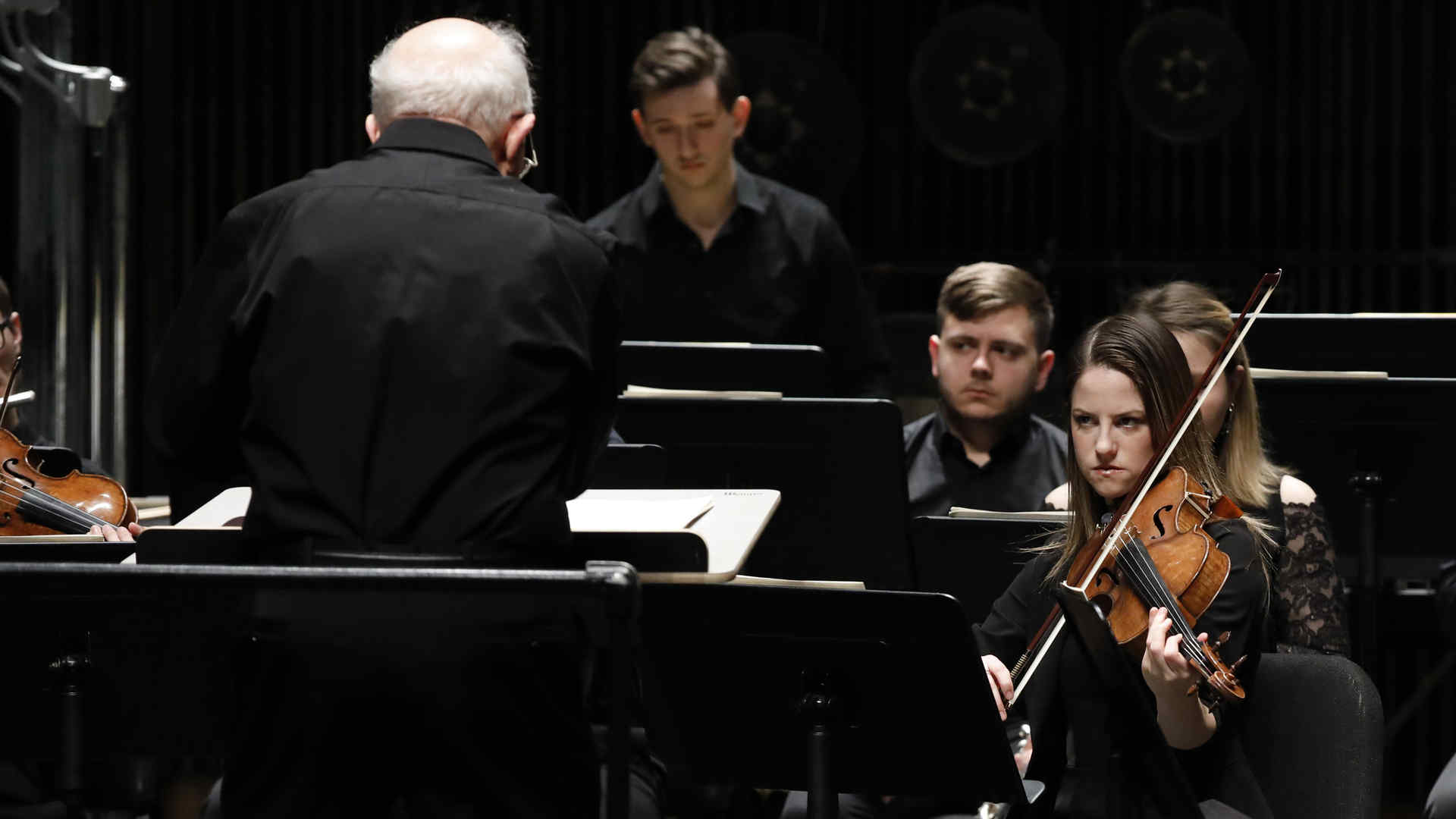 Joel Sachs, shown conducting the New Juilliard Ensemble on the first program of the 2018 Focus festival, which explored music by Chinese composers

A year ago, while writing a program note about the Argentine composer Mauricio Kagel, I began thinking about his place in the extraordinary new music scene in postwar Cologne, Germany, where he and many other compositional giants had settled. My mind turned to Westdeutscher Rundfunk (WDR), the radio-TV public broadcaster there, which has played a major role as one of the most prominent European radio stations that commission composers. I became convinced that those broadcasters should be saluted for giving the world so much new music and for helping so many composers earn a living. Thus was born the theme for Focus 2019: On the Air! A Salute to 75 Years of International Radio Commissioning, with repertory being a sample of commissioned pieces.

I immediately started contacting key stations to request lists of their commissions. Two German stations, WDR 3 and SWR, were the first to respond; they alone had commissioned many hundreds of pieces. The BBC had commissioned nearly 1,900; Radio France produced an even larger list; and the Italians, Austrians, and Scandinavians followed. Although I had originally planned to restrict the festival to European stations, I learned that Canada’s CBC had commissioned some 1,200 pieces. The numbers were staggering even though not every station was able to produce data because of cutbacks in personnel or archaic card catalogs that would have required immense labor to convert. Nevertheless the total eventually reached an estimated 8,000 pieces.

In contrast, public radio stations in the U.S. have, as far as I could determine, collectively commissioned just a few dozen pieces—for projects that required special fund-raising. The difference is rooted in the fact that American radio was from the beginning conceived to be commercially sponsored; noncommercial radio funded in part by the public treasury is a relatively recent segment of broadcasting, and it is perpetually starved for money. In Europe and Canada, on the other hand, radio was initially conceived to be funded by user licenses paid by anyone with a radio or TV receiver; in some cases, the charge is levied as a tax. (I have a vivid memory from my student days in London of seeing a van equipped with what looked like a radar antenna patrolling the streets. When it detected a radio or TV in service, an official would ring the doorbell and request to see the license. Having none brought a substantial fine.) Doubtless there are U.S. commercial stations that have commissioned pieces, and a few NPR outlets have commissioned work. But there has been nothing on the order of magnitude of Europe and Canada.

Despite the quantity of commissions in Europe and Canada, not all of them could be considered for this festival. Thousands of the pieces were symphonic, commissioned for the stations’ own radio orchestras; we would only have one orchestral concert during the six-concert series. Other unfeasible pieces include choral, children’s, and “light” pieces, and especially radiophonic music, which is composed for radio shows that can only be heard as broadcasts and not intended for live performance. Still, there was plenty from which to choose.

Even without considering all of those pieces, it would obviously be impossible to sift through the many thousands of commissioned pieces in creating programs for Focus. Fortunately, the lists include more than enough composers whose music is clearly of the highest quality. Putting together the closing program, which would be performed by the Juilliard Orchestra, was the first priority. To help sort out the possibilities, I asked John Woolrich, a marvelous English composer who is incredibly knowledgeable about new music to look over the BBC spreadsheet and suggest composers who might be unfamiliar to me. Surprised by how many foreigners had received BBC commissions, he suggested picking one to highlight this national unselfishness. John also observed that the list included many composers who were highly respected in their lifetimes but later forgotten, some of them for good reasons and some unjustly. Of the latter, he strongly recommended Symphony No. 2 by Michael Tippett (1905-98). Since I had recently been bowled over by a Tippett piece for string orchestra, I thought the idea was worth pursuing. Ara Guzelimian, provost and dean, immediately agreed to it. Then I noticed a WDR commission from the Israeli composer Betty Olivero (b. 1954), whose music I admire enormously, and the dean said he didn’t know that piece but that he’d never heard a piece of hers that he hadn’t loved. And finally, on SWR’s list I saw one of the monuments of “classic” European new music, Lontano by Hungarian-Austrian composer Györgi Ligeti (1923-2006). The program for our finale was settled.

As I write this article, I’m digging through lists to find good candidates for the opening NJE concert and the four chamber concerts. It is an amazing experience to go through them and watch the history of music unfolding before one’s eyes.

Joel Sachs joined the Juilliard faculty in 1970; this is the 35th year of the Focus festival