Thursday, Mar 21, 2019
by Thomas May
Juilliard Journal
Share on: 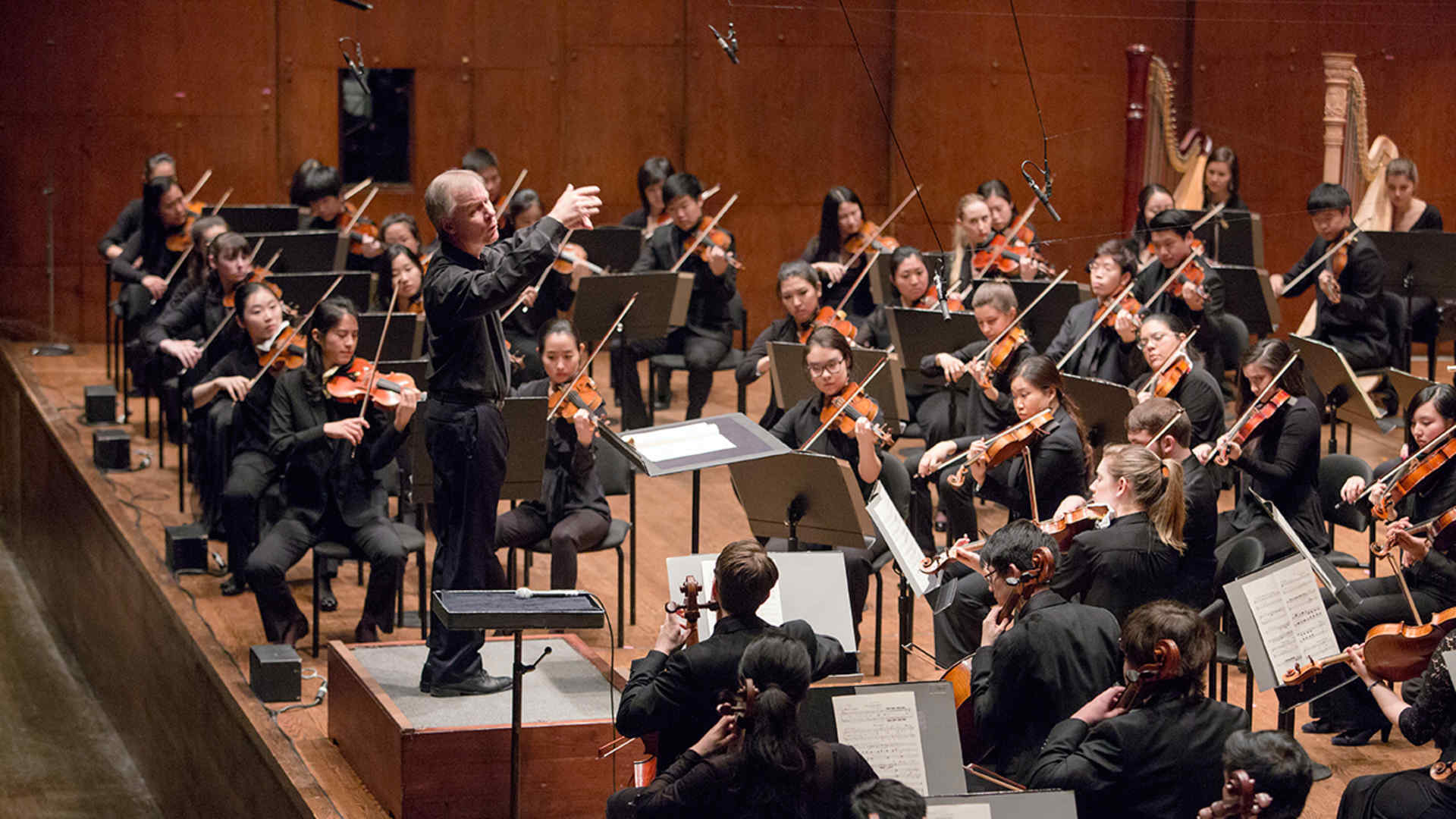 David Robertson and the Juilliard Orchestra

Olivier Messiaen's multicultural, multilayered ode to the power of love

“Turangalîla is the work of my life,” Olivier Messiaen wrote in a letter to a young Leonard Bernstein, who was preparing to conduct the world premiere near the end of 1949. Messiaen thanked him in advance for agreeing to take on this formidable challenge, “since I know (having seen you in The Rite of Spring) that you will do it in a way that is marvelous and brilliant.”

Bernstein was a mere 31 at the time—and Messiaen only a decade his senior—yet in many ways, Bernstein was the perfect match for this ecstatic score by a devoutly Catholic composer. Both artists shared an omnivorous curiosity and a fervent belief in the transformative power of music.

“Having conducted this piece many times, I have often thought it is so perfect for Lenny’s personality,” says David Robertson, director of conducting studies at Juilliard. So much so that he thinks Bernstein may have felt it encroached too closely on his territory—and for that reason never took it up again after introducing Turangalîla to the world in three performances.

The language of Turangalîla draws from a gamut of inspirations: the rhythmic structures of Indian classical music, the shimmering sound of Indonesian gamelan, bird song, and an outrageously lush harmonic palette.

For the Juilliard Orchestra’s May 3 concert at David Geffen Hall, Robertson will conduct Messiaen’s evening-length score. The Turangalîla-Symphonie requires a monumental effort to bring off, yet Robertson points out how ideally suited it is for young musicians. “It contains a catalog of all the techniques that were prevalent in the music of the 20th century up to its midpoint. From that perspective, it is a wonderful grounding.”

And this is music of extremes, Robertson says: “At times extremely slow, fast, loud, soft, it can be extremely violent and, on the gentleness meter, so extreme that you can’t imagine it coming from any culture other than the French.” Ultimately, the work expresses “an openness to the world and what animates us as human beings, which is the concept of love as Messiaen understood it. This is what makes it so great for young people.”

Messiaen composed this multicultural, multilayered ode to the power of love on a commission from the Boston Symphony and Serge Koussevitzky, who handed over the responsibility for the world premiere to his protégé Bernstein. At the time, Messiaen was preoccupied with the myth of Tristan and Isolde, but this 10-movement symphony also manifests his fascination with non-Western culture.

A “love song and hymn of joy, time, movement, rhythm, life, and death” is how Messiaen described Turangalîla, whose title combines Sanskrit words meaning “the play of time”—“play” here being understood as the cycle of creation and destruction. It also juxtaposes the temporal with the eternal, which is an abiding concern in Messiaen’s music, as seen in the titles of such other compositions as his wartime Quartet for the End of Time and the later Chronochromie (“The Color of Time”). 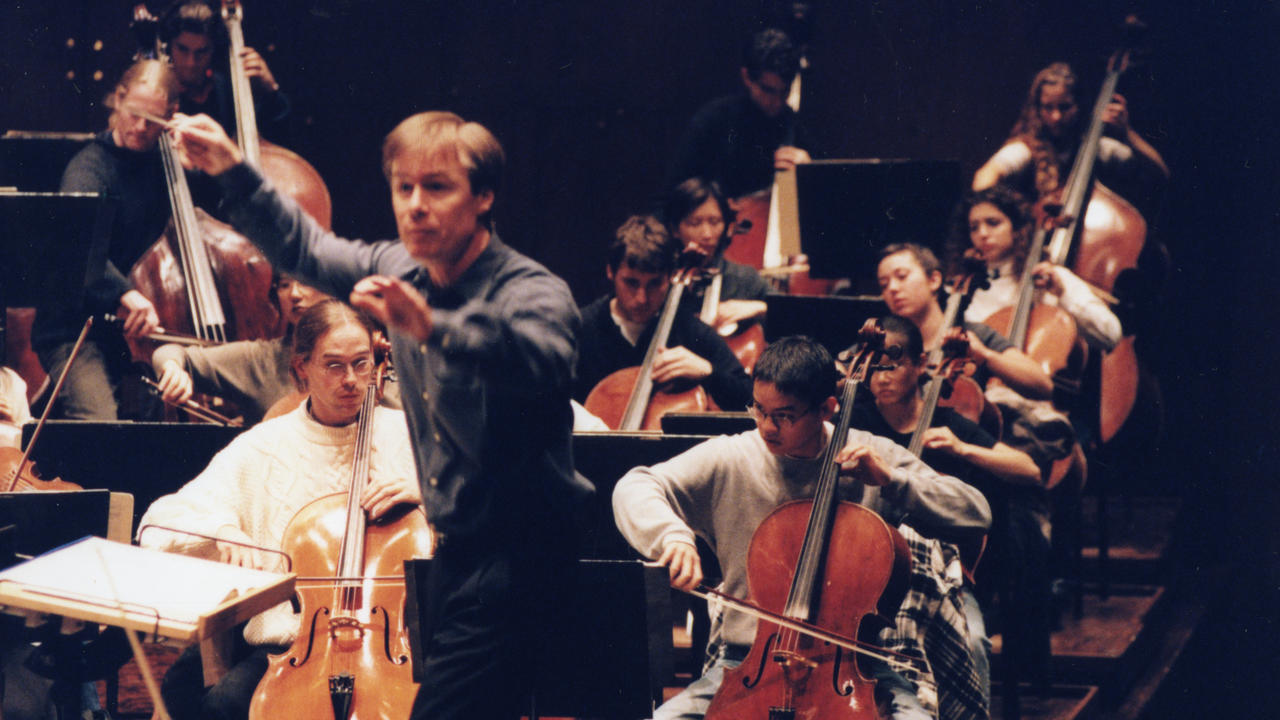 There are no voices or text, yet Turangalîla comes across as a vast song-chant-outcry and features an enormous but unusual orchestra. Along with a greatly expanded percussion section, prominent roles for solo piano and ondes martenot distinguish Messiaen’s soundscape. The latter is an early electronic instrument (named for its inventor, Maurice Martenot), somewhat reminiscent of the theremin familiar from old-fashioned horror film scores. The ondes martenot has enjoyed a revival in recent decades thanks to such advocates as Radiohead’s Jonny Greenwood. For the Juilliard Orchestra concert (and indeed most contemporary Turangalîla performances), Cynthia Millar—whom The Observer described as the “unchallenged sovereign of the ondes martenot”—will be the ondiste.

Third-year piano and composition student Tengku Irfan (Pre-College ’16), the piano soloist, notes that Messiaen’s score calls for two roles—symphonic and soloistic—and “sets a precedent for symphonic pieces that have a soloistic piano role.” Irfan also points to the challenge of playing a part “in the middle of a dense texture, when the rest of the orchestra plays its own thematic ideas, in various rhythms and dynamics, instead of the usual situation of supporting the piano and vice versa.”

The language of Turangalîla draws from a gamut of inspirations: the rhythmic structures of Indian classical music, the shimmering sound of Indonesian gamelan, bird song, and an outrageously lush harmonic palette. And for Messiaen, sounds literally were a palette: he experienced synesthesia and perceived sounds as colors. These often involved dazzling combinations such as, in the composer’s description, “blue-violet … cobalt blue, deep Prussian blue, highlighted by a bit of violet-purple, gold, red, ruby, and stars of mauve, black, and white.” Particularly challenging for the orchestra is learning how to navigate Messiaen’s complex polyphony of ever-changing meters and rhythmic patterns. This is music, as Messiaen authority Paul Griffiths memorably puts it, “of many clocks, running fast and slow, forwards and backwards.”

“I’ve done it now with maybe a dozen orchestras,” Robertson says, among them the Juilliard Orchestra in 1998. “The forces are so huge and the requirements for rehearsal time so extensive that the opportunity to put it on is already something extraordinary. Every time, I feel like it's an extra Christmas present.”